﻿
Just a WARNING before I begin: this is going to be a gory, bloody post. If you have an aversion to hunting, and pictures of dead animals, please do not continue.
On Sunday, November 18th, 2012 I accompanied NYSDEC Region 4 Fish and Wildlife Technician Gary Golja on a run around Region 4 (depicted at left) to collect some biological information from recently harvested white-tailed deer (plus 1 other species!). I'm originally from Region 8, and will probably mention that further through the post.

I'm not sure of where exactly we went, but if he had kicked me out of the truck, I would not have been able to get back home!


The morning was crisp, clear, and very sunny. Everything was covered in a frost that just sparkled.
﻿﻿ 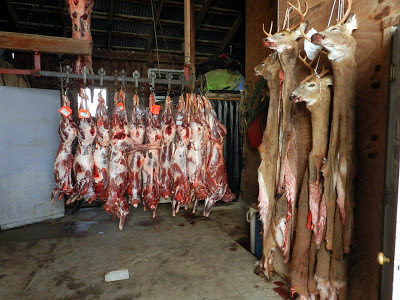 The first place we stopped kept us busy for awhile...Chris Boss has a butcher shop on his dairy farm. The place was clean, cold, and obviously well kept. I was able to participate in a deer check last fall in Region 8, and visited a butcher that was not nearly as pleasant (as pleasant can be) to visit. You're probably wondering why on Earth I would volunteer my time on a Sunday to hang out with a bunch of carcasses. Acquiring biological data from dead animals is extrememly time efficient, especially if they're concentrated like they were here. We had to age the deer (I'll explain that process below), sex them, take down the deer tag number, what hunting season it was taken in, and we took a few samples as well. Doing all of this with live, wild animals is stressful (to animal and biologist), dangerous, and time consuming. Since the shotgun season just opened this weekend in the southern half of NY, there was no shortage of deer to take information from.
Each deer had a tag on it, and most of the ones we checked at this location were already skinned out. So we had to match the carcasses hanging above, to the skull caps (left). The deer with head and skin intact, was referred to as a "cape". We had to match those to a carass as well. The capes were going to most likely be sent to a taxidermist...as you can see, they seem to be larger bucks.

So everything was labeled, there just was a bit of back and forth to match them all up. Thank goodness it was cold out (mid 20's F!), because it could have been fragrant in there. Gary did all the "work", as he is the professional. Alicia, a classmate and a The Wildlife Society clubmate, and I just hung back and recorded data for him. We asked a million questions, and learned (and relearned...as I did this last fall) how to age the deer by their dentition (teeth) and antler size.

I believe Gary said that he's been at this for 30 years +, so he quite experienced and has looked at a lot of deer. I'm not sure who came up with the system of aging deer, but this system can be used to age almos to the month of birth. 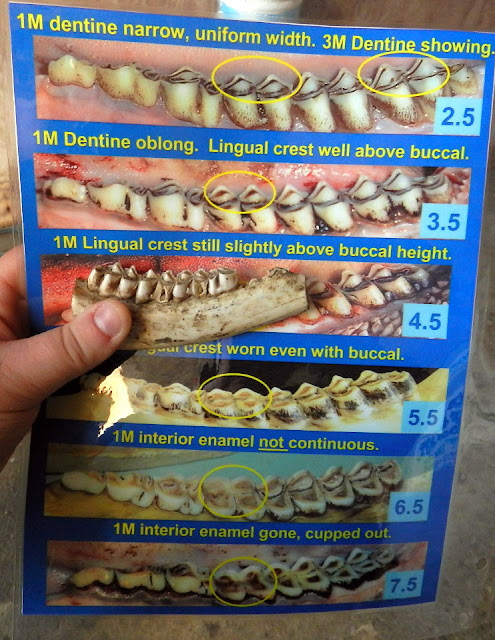 On the other side of this form, there were depictions of a "young of the year" (aka: fawn) jaw (6 months or less), 1 year 5 months, 1 year 6 months, and 1 year 7 months, and 2 years 6 months.. An assumption was made, based on white-tailed deer natural history: all fawns are born in the spring (~May) of the year. There is some give and take, and overlap between conditions between ages, so the person doing the aging had to use his/her best judgement.
Key things to look for were: number of teeth (young of the year have less than adults), types of teeth (milk teeth vs. adult teeth), and the wear on the teeth. Deer are herbivores that browse and graze on soft succulent vegetation, and tougher woodier vegetation as well. Their teeth wear down and the dentine (brown part of tooth) is more and more exposed as the deer ages.﻿﻿ 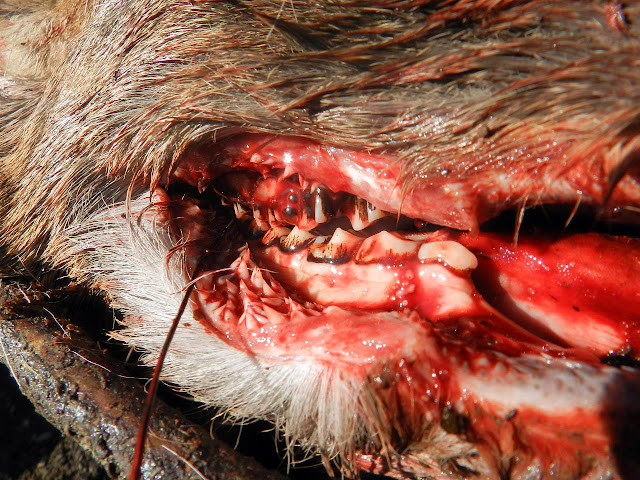 On deer that were not being saved for taxidermy, Gary was able to cut the cheek back giving us a better view at the teeth. AND because I didn't write it down/I can't see the teeth well enough in this picture, I can't give you an age for this deer. But, if I had to guess, based on the 3rd premolar (it isn't tri-cusped yet), that this is a young deer. Check out the Deer Hunters Guide for Aging and Jawbone Removal website I've been looking at.
After much driving around, looking at over 75 dead deer, and having cold toes all day, Alicia and I were ready to go by the last stop. We pulled up and saw this: 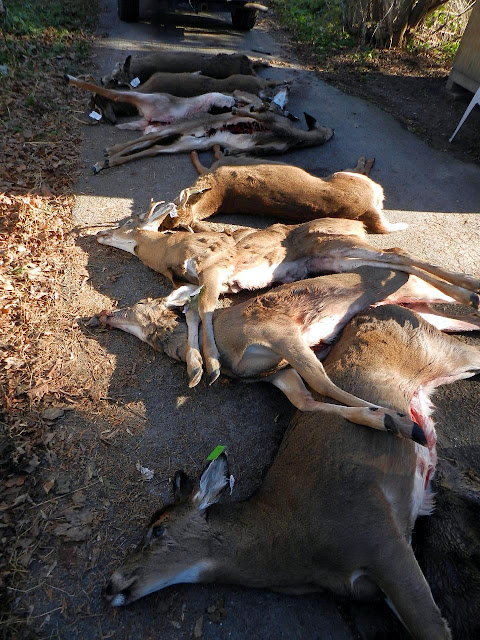 And then inside we saw this: 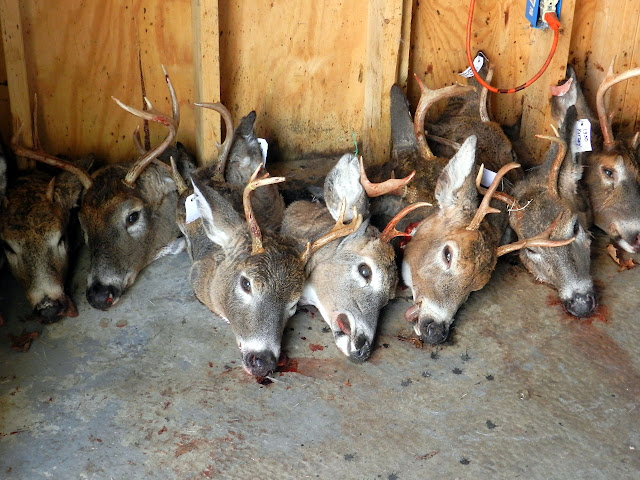 Even more deer! These had already been seperated from the body, and the carasses were hanging in the cooler waiting to be butchered. I'm getting over being squeamish, but that doesn't mean I don't get grossed out! What I really don't like is how their tongues stick out!
We had many more deer to get through, but the 3 of us made quick work of collecting all the information Gary needed to turn into the state. All of this same information is gathered across the state, and is used by a statistician to determine what the population of NYS white-tails is, how many hunters there are, sex classes being taken, and age classes being taken. All of this is important for biologists and wildlife managers to be able to create management plans and hunting seasons to help maintain the populations of deer.
As we were almost done, a pickup truck backed up to the door of the shop with a big black bear in the bed of the truck! Anyone who knows me personally, or has read this blog for a length of time, you'll know I LOVE black bears. I get asked all the time if I'm sad when I see a dead one. No, I'm not. I understand the importance of hunting (to managing our resident bears), and I got to handle and inspect a very large black bear yesterday! If that hunter hadn't brought him in to be butchered, I would not have been able to see it. And this was even more exciting for Alicia, who has never experienced something like this before. Lucky for me, I have several times. 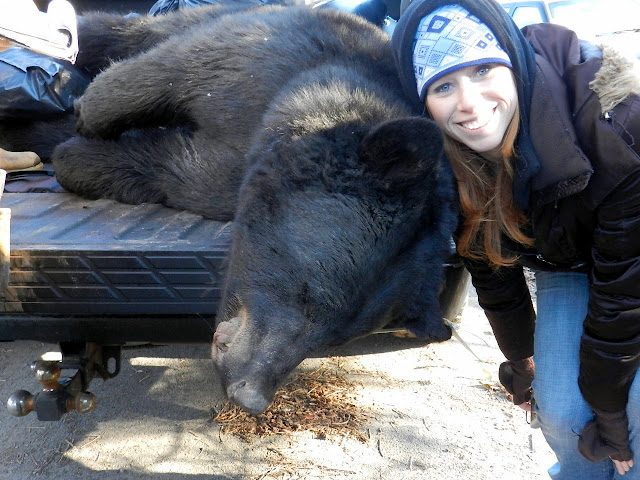 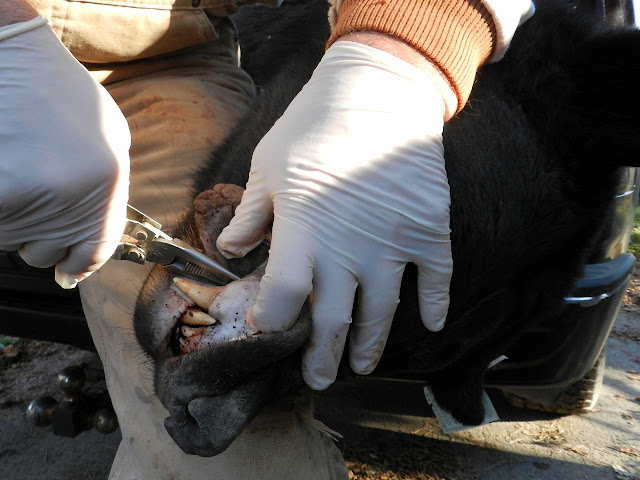 Gary couldn't field-age this bear, but has to pull one to send into the state pathology lab to be aged. The tooth is sliced in half, and the cross section bears rings, similar to a trees growth rings. I can tell you though that this bear was not a cub born this year, a yearling, and was most likely several years old. Before the hunter gutted it in the field (they do that so the meat starts to cool down immediately, so it won't spoil before it's butchered and packaged) this bear likely weighed 300+ pounds. 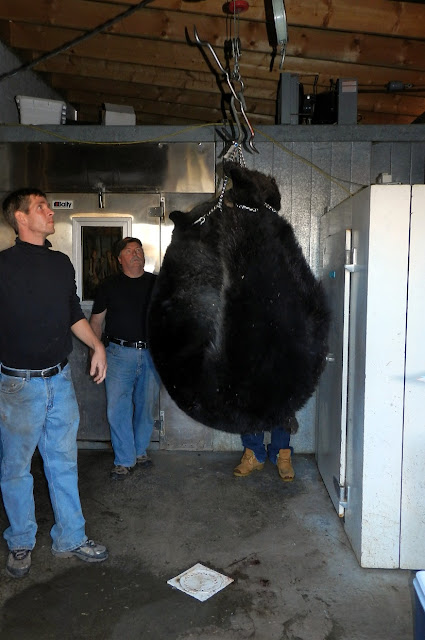 Guts removed, this bear weighed in at 290 pounds. 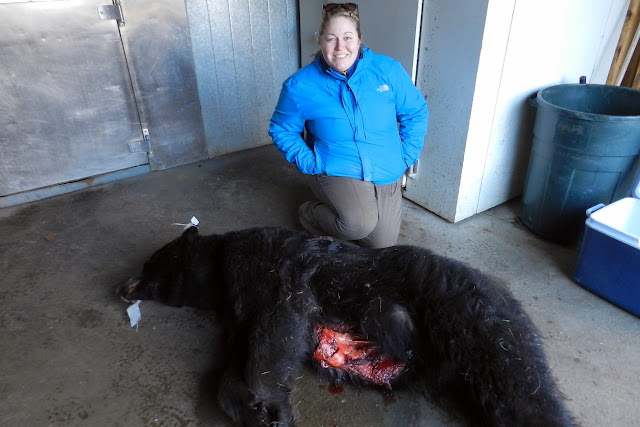 It was a great day spent with Gary and Alicia! Gary mentioned some projects coming up this winter that we can participate in, one of which is a large fisher project across the state. Looking forward to working with him again!
If you're interested in seeing my 'deer check' experience from last fall, check that entry out HERE.
Written by: Alyssa Johnson at 11/19/2012 01:47:00 PM Labels: Black bear, DEC, Deer check, Gary Golja, New York, Region 4, White-tailed deer