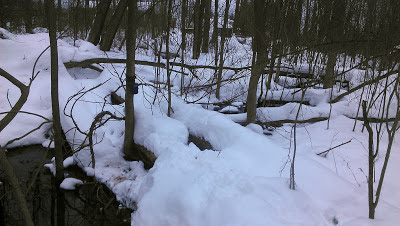 As a previously wrote about, this camera is proving to be a major step up from the other brand that I own. It seems to reliably take pictures! Which is always a nice feature to have in a camera.
The first 2 times I checked it, the camera was set on the video setting. I got a few nice clips of a raccoon scoping out the area, which you can view here.

Can you see the camera in the picture at above? It’s mounted on the second tree from the left.
I just went out and grabbed to SD card out of the camera again, and was rewarded with 4 species of animals. All of them are common, but their presence allowed my new camera to do some work. I’m pleased with the quality spread out over 250 images. This time I had the camera set to take still images, 3 at a time. With a trigger speed of 0.594 second trigger speed, the images pile up quickly.

The ‘possum looks so washed out because he’s close to the camera. I was struggling with a definition or explanation of how infrared cameras work. I knew how, but was unable to articulate it, so after a quick internet search, I came across the site: Teachers Guide to Infrared, which had a section titled “How do infrared cameras work?”….perfect!

How do infrared cameras work?

Thermal infrared imagers are detector and lens combinations that give a visual representation of infrared energy emitted by objects. Thermal infrared images let you see heat and how it is distributed. A thermal infrared camera detects infrared energy and converts it into an electronic signal, which is then processed to produce a thermal image and perform temperature calculations. Thermal imaging cameras have lenses, just like visible light cameras. But in this case the lens focuses waves from infrared energy onto an infrared sensor array. Thousands of sensors on the array convert the infrared energy into electrical signals, which are then converted into an image.
So I think when a WARM item, like this live opossum is too close to the camera, there’s too much “bounce back”, similar to a regular flash. There is a setting where I can turn on all 36 LEDs (high), 24 LEDs (medium), or 12 LEDs (low) based on the distance I’m trying to reach with the camera’s scope. I have the camera set on medium right now, which seems ok for most of the pictures. The opossum has a lighter pelage too, which doesn’t help.


I’m quite pleased with how this camera is performing. It’s a nice change from what I’ve been using!