...pretty much nothing! If you're new to this blog, I'm referring to the previous entry A new camera trap set! in which I wrote was bored with how I have been recently setting up my camera traps. I took a few extra steps to try and lure in the fisher (Martes pennanti).

Although 98% of my pictures were duds, Fisher DID stop by and check out my set for a little bit.

Before I share those pictures though, I wanted to share this little story. Last night (February 26, 2013), I got home from being in class all afternoon, and took my dog out for a walk around the backyard. I live on about 8 acres, but most of that is a very steep wooded hill. It was exactly 6pm (I checked), and it was still a bit light out, or maybe it seemed that way with all of the snow on the ground. Because of the white snow, I could see a ways up into the woods up the hill, almost to my camera trap set. As I'm standing there waiting for the dog to do her business, my camera flashed. It's way up the hill, and just over a small landing that I think used to be a logging road, so I can't directly see it. But the dim lighting in the woods allowed me to see that flash. I froze...and stared into the woods, hoping to see a deer, fisher, bobcat, bear SOMETHING bounding through the snow. Nothing. The flash went off 6 times in all before I went in. I'll admit it- I got spooked haha. SOMETHING had to be up there, right? SOMETHING was setting off my camera, right? I could hardly wait to trudge up the hill today and check. Here's the last picture that was recorded on my camera. 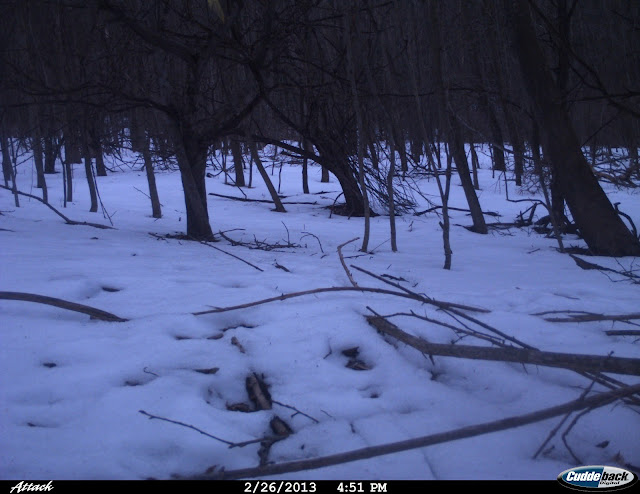 Notice anything? No. Neither do I...except that the timestamp is over an HOUR before I noticed the flashes. This was the last picture recorded. Sigh. Cuddeback, you've done it again. I will say that when I checked the camera today, the battery level was at 10%. That's low. But what I don't understand is that the camera was still flashing, but not recording images. From what I understand, the flash mechanism is the more "costly" feature of the camera. It burns a lot of battery.
Anyway, I did get a few nice images of a fisher and an Eastern cottontail...just moments apart too. 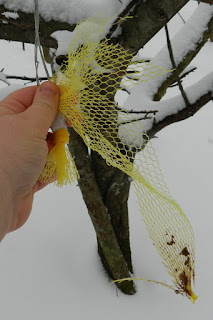 The bag that held the delicious treats of raw chicken scraps and that was doused in Kishel's Weasel Food Scent Lure was tattered and empty.

There were no visible tracks (except red squirrel) because we got 3-4" of heavy, dense snow overnight.

The culprits could have been:

I of course was hoping for fisher, although pictures of a gray fox climbing a tree would have been pretty cool too! 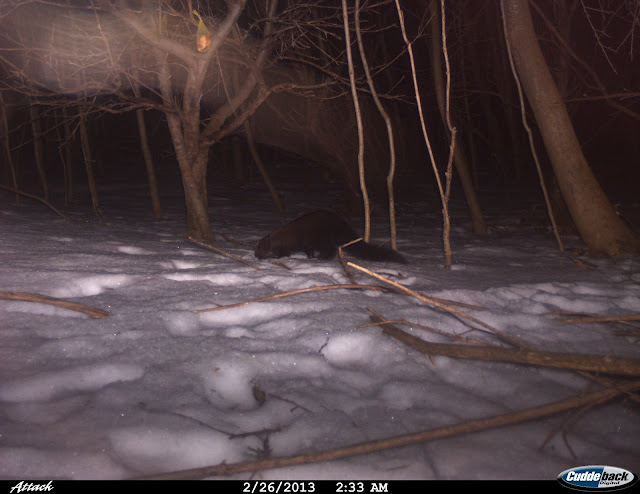 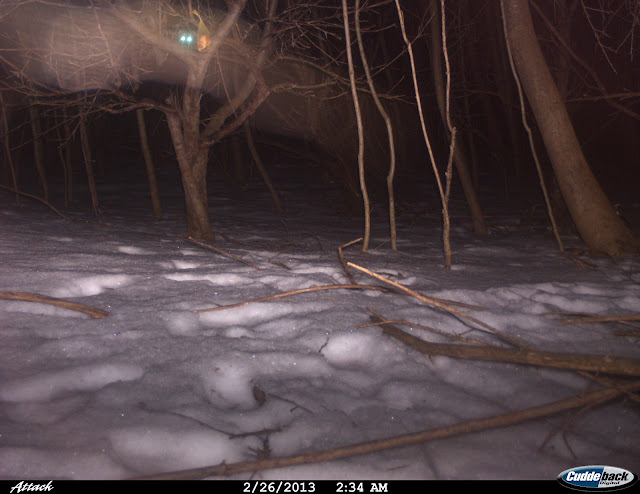 Do you see the culprit up there? 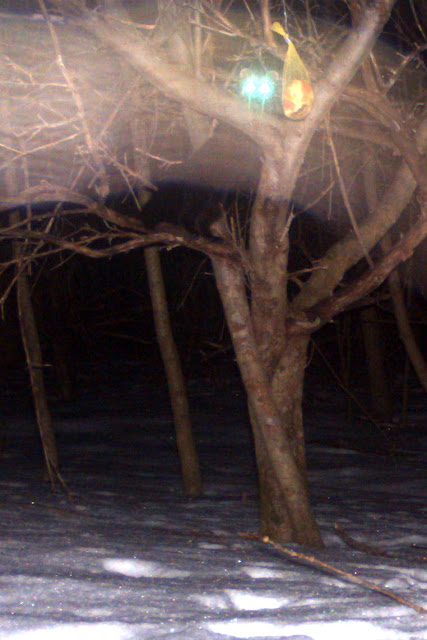 That's the fisher-cat alright! Something was waving over the lens of this camera, although I don't know what. I didn't notice anything...and it's in the "perfect" spot, right over the spot where the fisher hung out. 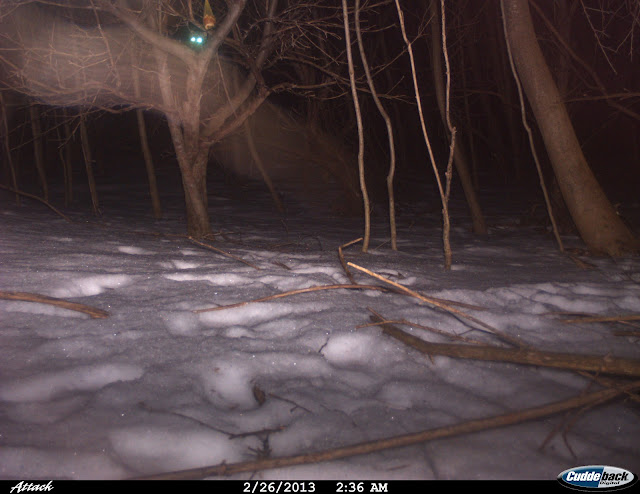 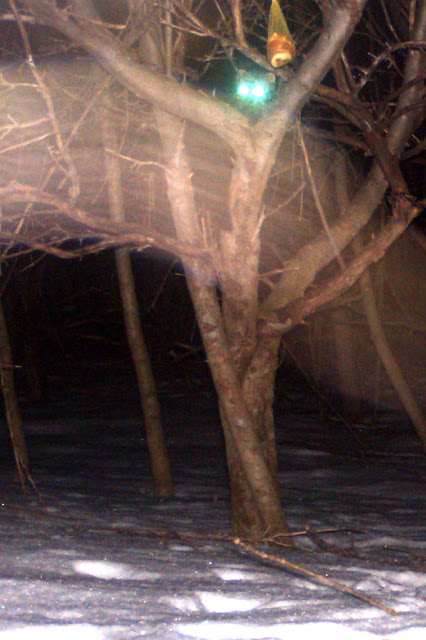 The bag is not yet pulled up over the branch...seems the fisher was checking the situation out. And this fisher, or maybe I have more than one visiting, does NOT seem to be deterred by the flash whatsoever! 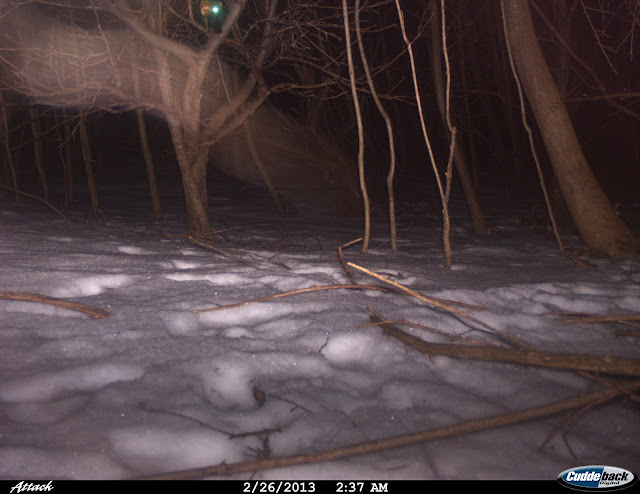 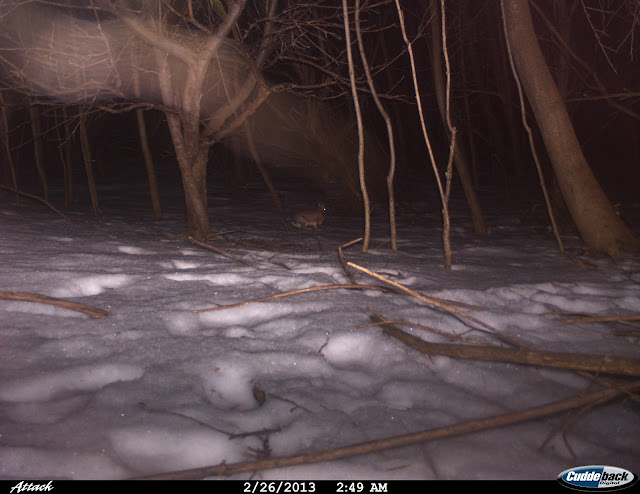 And now the bag is out of sight...and so is Fisher. And look who shows up: the Eastern cottontail. Perfect fisher food. 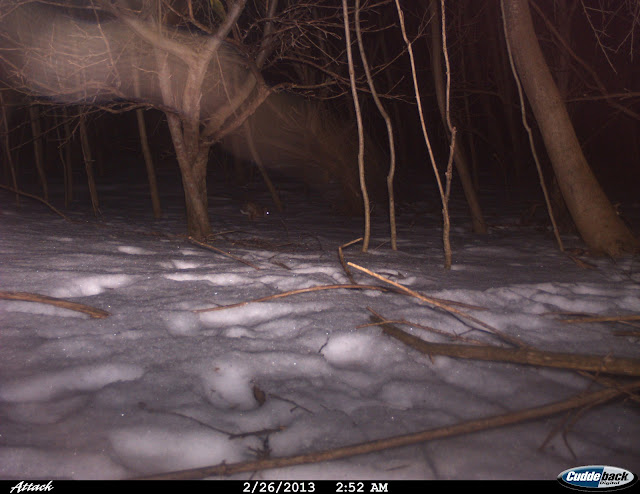 Peter Cottontail does not seem concerned that a blood thirsty, voracious carnivore is on the prowl... 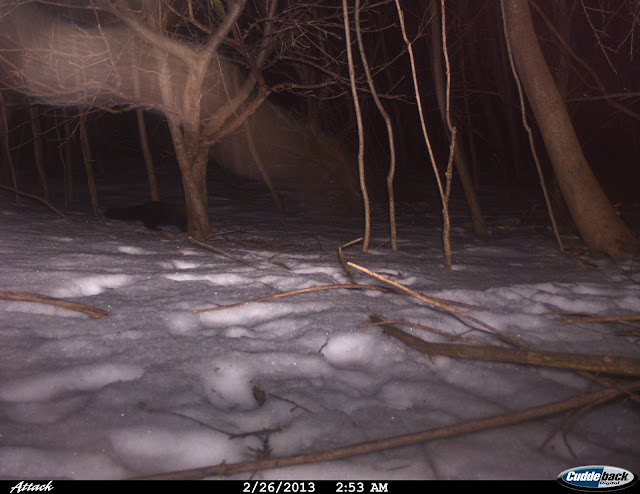 Literally ONE minute later....Peter is gone (where??) and Fisher is back. 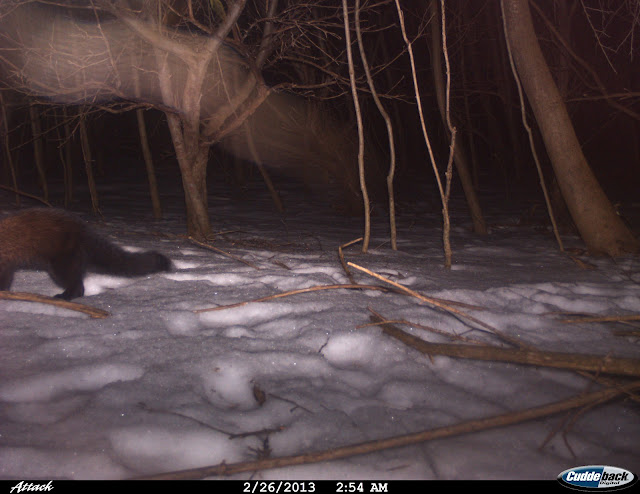 And this is my last picture of the fisher. No wonder these guys are considered "fur-bearing" animals. That coat looks so soft and warm. I would LOVE to handle one.

So, that's all for now! When I reset this set up, I will reposition my camera a bit so we're looking more directly at the tree. But, I think my effort was not wasted, even though I got 1,347 pictures of "nothing".