Going out on a limb

I have a tendancy to oversensationalize when I'm identifying critters. If I find a mink track, I want it to be a river otter so bad. If I get a blurry, grainy IR fox image...I really want it to be a gray not a red.

In this case, my gut reaction to this camera-trapped image below was that I caught the Common Raven (Corvus corax) perching on a log. Which would be a new species for me. 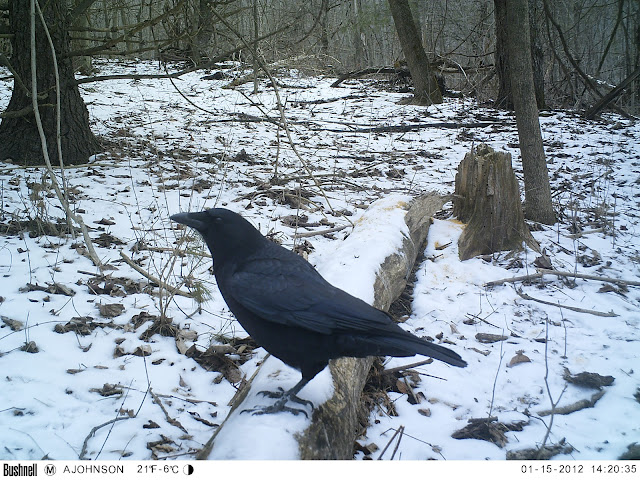 Then I talked myself out of it, and said "No, couldn't possibly be...it's just a [American] Crow (Corvus brachyrhynchos)".

I even blogged about it over at my Albany Times Union 'Discovering wildlife' blog...and called it a Crow.

But now looking at it, I'm not so sure.

Here's why I think it's a Raven: 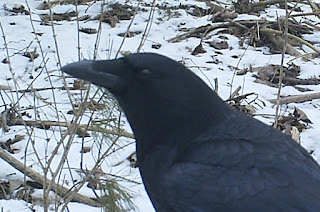 -Size. That looks like a big bird. Granted it's fairly close to the camera, but upon reviewing pictures taken at this site of DEFINITE Crows, I feel like this is a bigger bird than those.

-Bill. Raven's are known for having a much heavier bill than the Crows. Also, there are some feathers on the dorsal (top) bill that extend down the culmen. Am I using that word correctly? The Crows don't seem to have this, as I look at drawings in my Sibley's and Nat Geo books.


I unfortunately don't have any GOOD Crow pictures taken from this same angle. Or at least that I saved. Crows are a dime a dozen, so I tend to delete those pictures, unless something is really cool. I do have this picture though that's at almost the same angle, but on a different brand of camera. 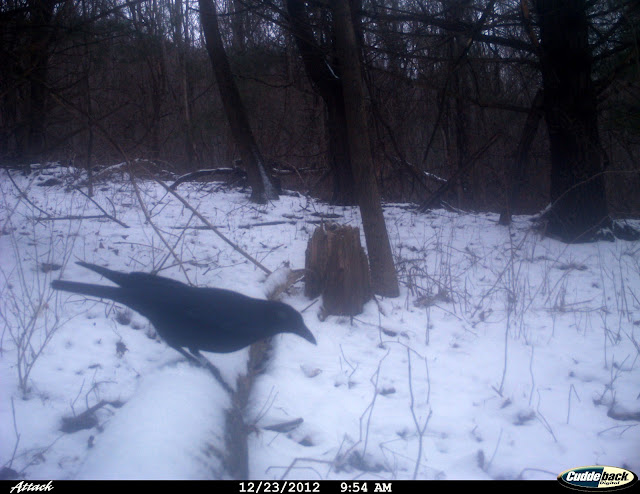 This seems to be a Crow. Although it's further away from the camera, it seems to definitely be of a slighter build. Also, it's bill seems a bit more slender and not as thick.

One feature of the Raven that is pointed out in both Sibley's and Nat Geo, is that the Raven has some shaggy /throat breast feathers. Unfortunately in neither of these pictures can you see those feathers. So, I can't use that as identification.

Alright, Bloggers. I fully expect to be supported or called out on my sensationalism. If I'm wrong, and this is just a plain old Crow....I'm ok with that. But if that's a Raven, then I have another bird to add to my camera-trapped list!