Happy Holidays! I hope everyone had a fun, bountiful, full-of-good-food-and-drink, holiday!


Last week I went to Mendon Ponds Park with my friend from school, Mady. Mendon is a beautiful county park in Monroe County, NY. We both love the outdoors and specifically wildlife. So we decided to head to to this park to do some walking along the trails. Mendon is known for the tame wildlife that lives there, like song birds, squirrels, and white-tailed deer. Before I share the photos from that day, I want to throw this out there: we did NOT touch or handle any of the wildlife except for the chickadees that landed on us, and a squirrel that ate out of Mady's hand.

Before we began our walk, we stopped at the Wild Wings facility, which is a nonprofit wildlife rehabilitation center that is housed on the park property. They house a variety of raptors from the tiny Saw-Whet Owl to the majestic Bald and Golden Eagles. They also have one mammal- a bobcat named Tara. Tara  is a wild bobcat that is originally from somewhere in the state of New York. As a kitten, she was stolen out of her den by someone who wanted a "pet" bobcat, or wanted to sell her on the exotic animal trade market. She was found out about by the Department of Environmental Conservation, and seized. She had been declawed and habituated to humans, so she was unable to be released, so she found her forever home at Wild Wings. She is a beautiful cat! 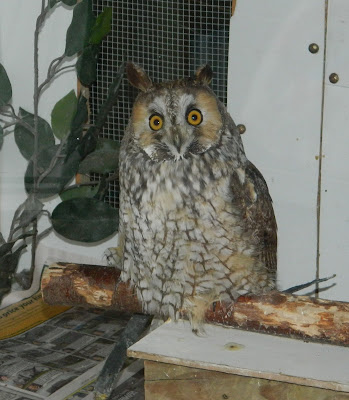 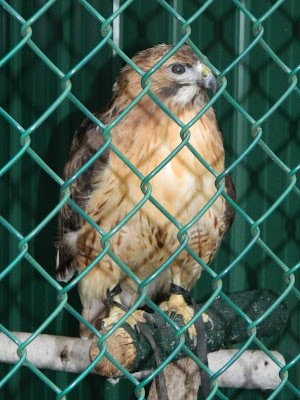 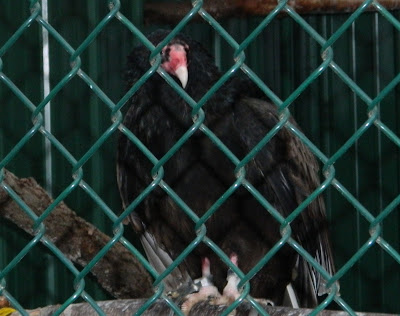 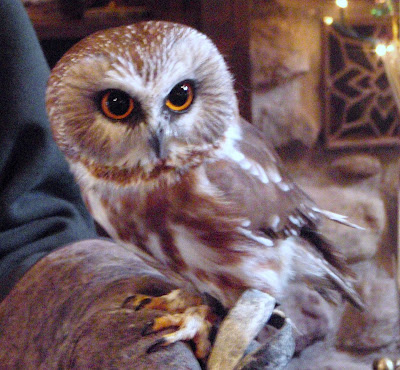 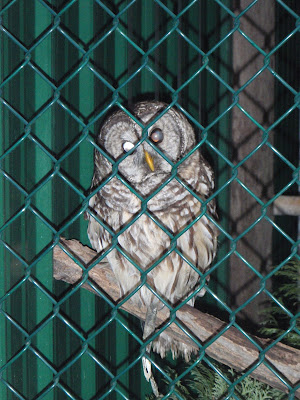 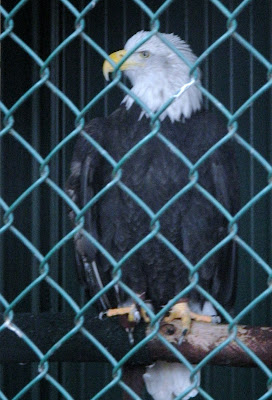 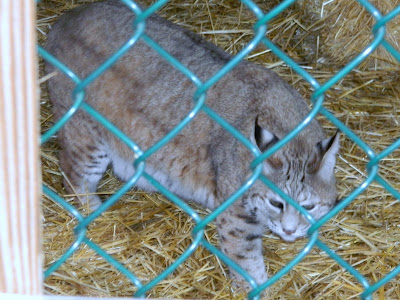 Tara the bobcat
A friend of mine, Katie, volunteers here, and she has a wonderful time caring for the animals! If only I lived closer, I would love to volunteer for them. 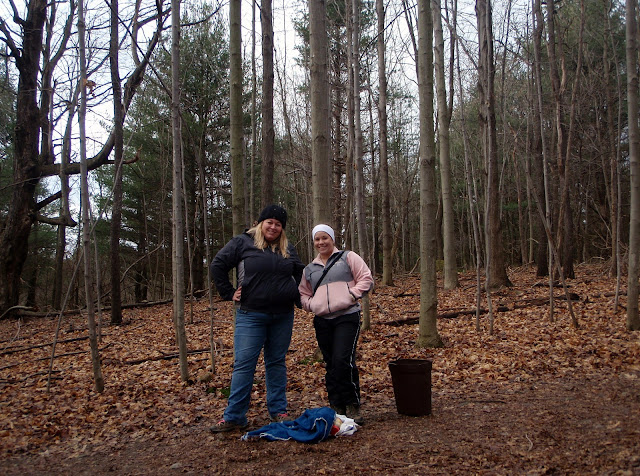 Mady and I on the beginning of our walk! As you can see, we STILL don't have snow here in Upstate NY, but it was colder than I thought it was! 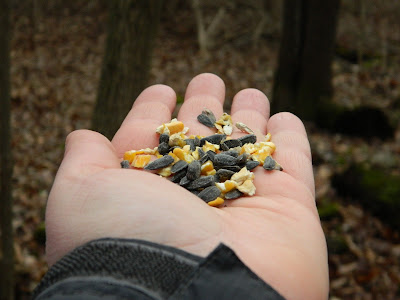 We picked out our spot, and began to "pish" the chickadees in. If you don't know what this is, and like to see wildlife up close, click that link and learn about it. It's very cool! 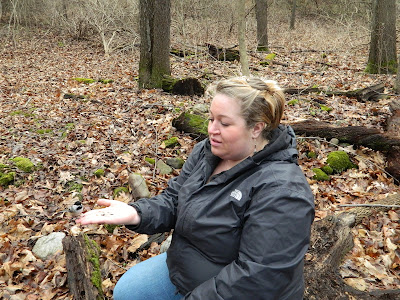 That's me with a Black-capped Chickadee! 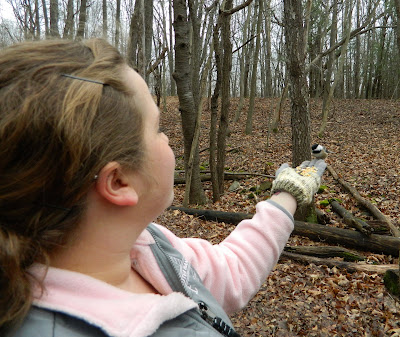 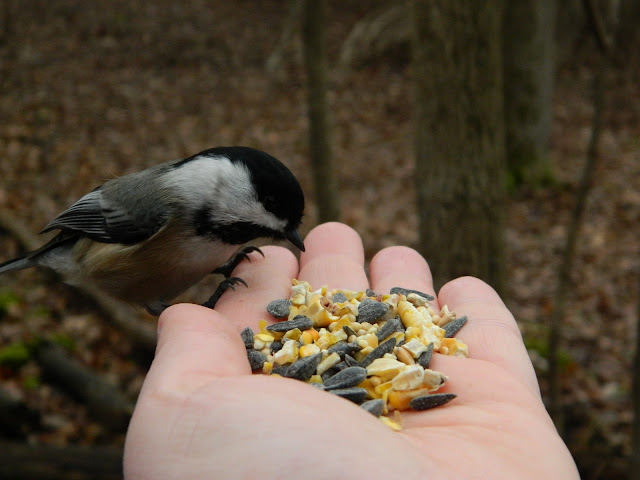 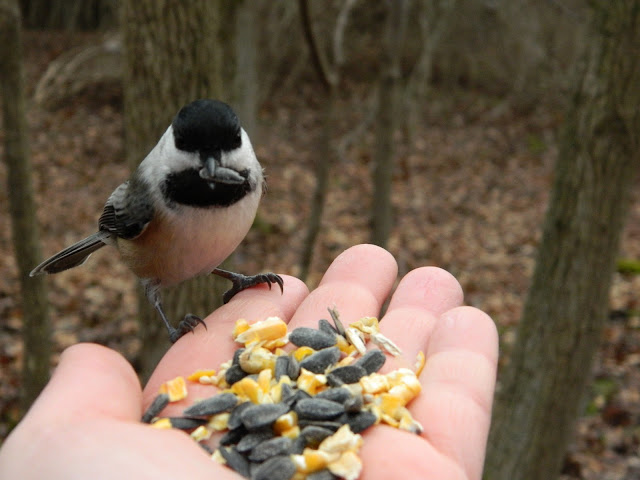 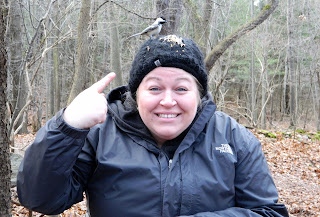 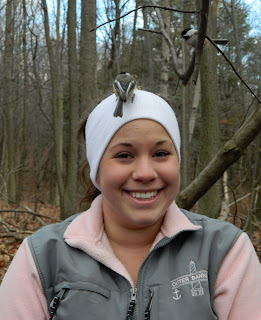 Myself and Mady with birds on our heads :)
And here's a video of some chickadees coming in for a snack...
In this video, you can hear me say "Get off my foot!", I was talking to a gray squirrel that was trying to climb up my leg while I was feeding the birds...
After feeding the birds for awhile, we decided to move onto a new spot...and we came across a VERY unafraid gray squirrel who became our buddy for a bit. Again, we did not reach out to this squirrel and try to touch or handle him, but he approached us. It is illegal to touch a wild animal in NYS. This is unusual behavior for wild animals, but this park is known for people feedind the birds, and the squirrels, birdseed. 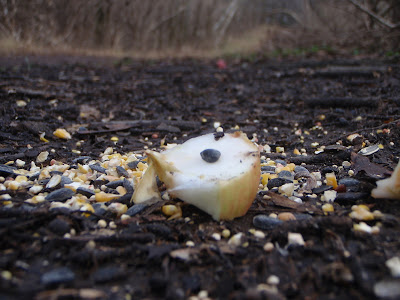 I spilled some seed on the ground, and a chunk of apple....and I squatted down to try and pick it up, and this is what happened... 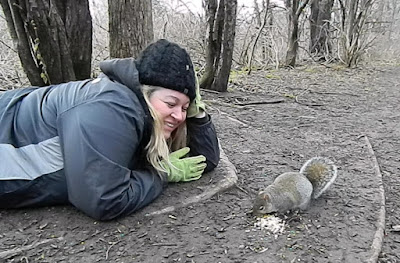 This FAT gray squirrel came right up to me and started feeding. Maybe I SHOULD have moved away, but he was completely unafraid, and I was shocked that I was able to be so close to a wild animal. So I laid there and snapped this picture: 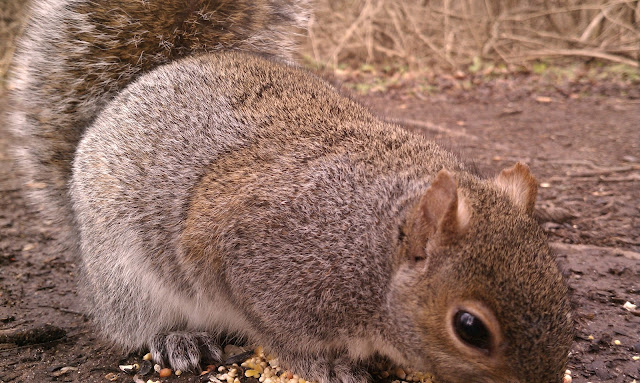 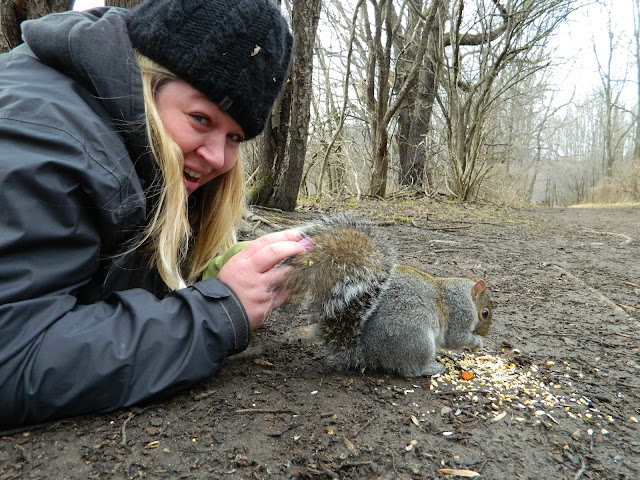 And Mady snapped this one....this squirrel was too funny!
We had such a great afternoon just hanging out, laughing, and watching the birds and the squirrels. I definetely want to make it back there soon! I'm not sure what the next post will be about, but I'm hoping to get outdoors this week and do some fun stuff, and of course I'll be sure to write all about it :)﻿
Written by: Alyssa Johnson at 12/26/2011 09:03:00 PM Labels: Black-capped Chickadee, Bobcat, DEC, Eagle, Gray squirrel, Inc, Mendon Ponds Park, Owls, Raptors, Tame wildlife, Wild Wings, Wildlife Rehabilitation