Last night's evening activities started out well enough. The birds were singing, the air was crisp, but the sky was blue and it felt like a true late March spring evening. My friend Mady and I drove down to the field station on Honeoye Lake which we both spend a lot of time at. A hobby for both of us is looking for skulls and shed antlers, and since the field station is private property, we figured it hadn't been picked over for the "good stuff". 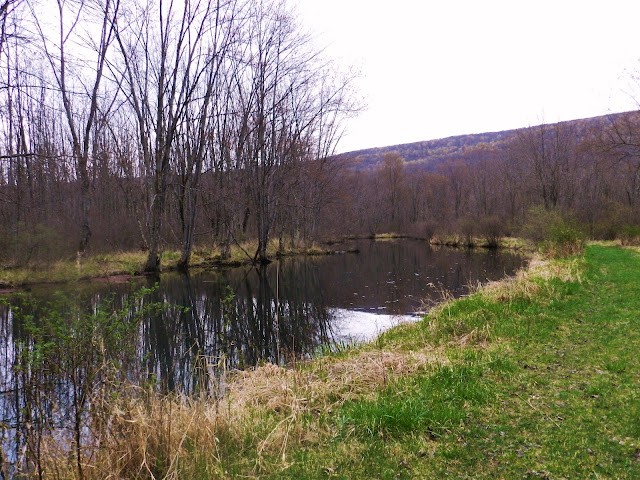 We started on the trail, but quickly took to the woods because the trail is well traveled and maintained. We wound our way through the underbrush, sticking to animal trails, and kept our eyes peeled for antlers and bones. 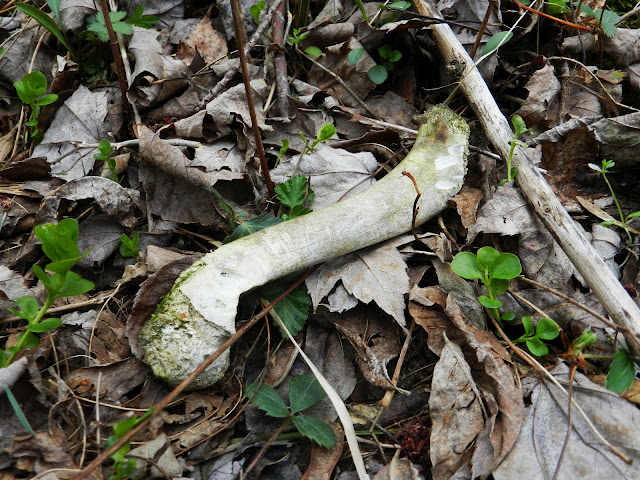 This was the first find of the evening!
A leg bone of...something. Probably deer, but I'm not savvy enough to field ID bones. 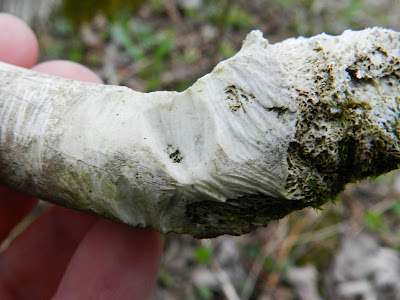 What really interested me was that the bone was chewed along it's length. I've read about this, and learned about it in my wildlife classes at school...but have not witnessed it for myself. Apparently rodents of all sizes (from mice to porcupines) seek out the calcium rich bones and gnaw them. I'm sure this also helps maintain length and sharpness of their teeth (rodent teeth, specifically incisors, continually grow throughout the animals lifetime), but I'm not sure if gnawing bones is A) for calcium or B) teeth sharpening, or the other way around. 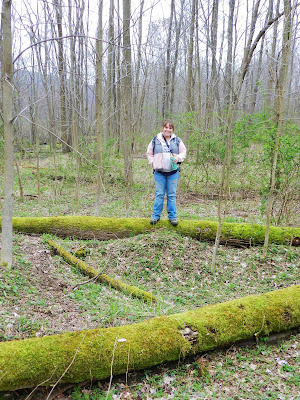 As you can see in this picture, we had a nice open, dry area we were walking through. The dead leaf litter made a nice contrast for our eyes to pick out the whiteness of the bones. This did not last, which I'll get to later... 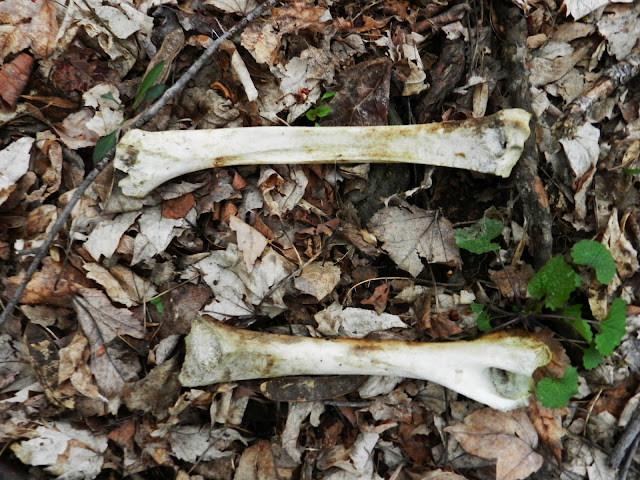 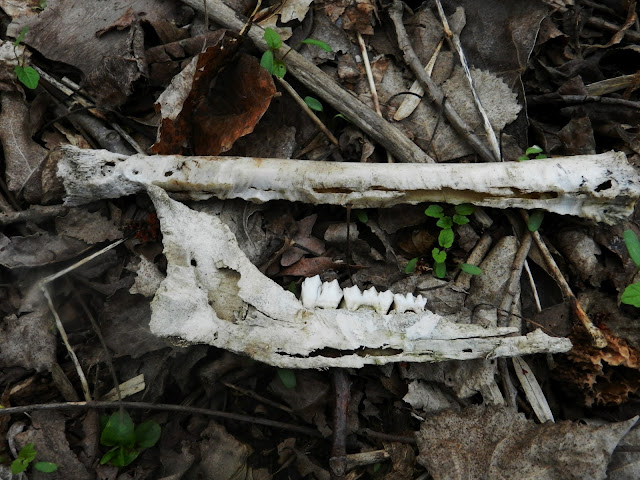 More treasures...including a nice little bottom jaw that belonged to a white-tailed deer. 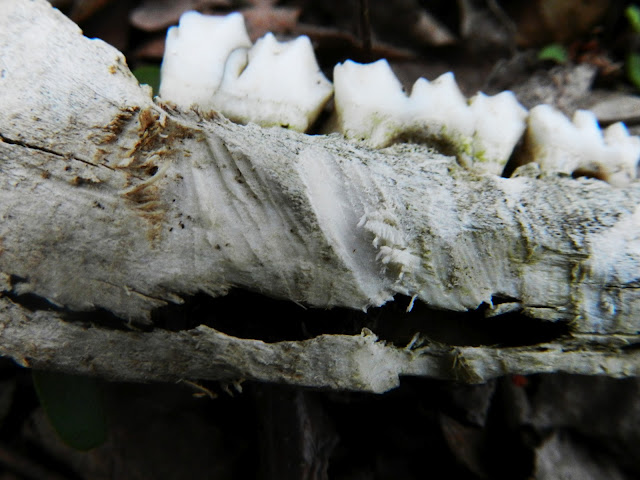 Notice the chewing, I can really pick out the grooves from the incisors. This is very reminiscent of a beaver chew, which I conveniently have a picture of! 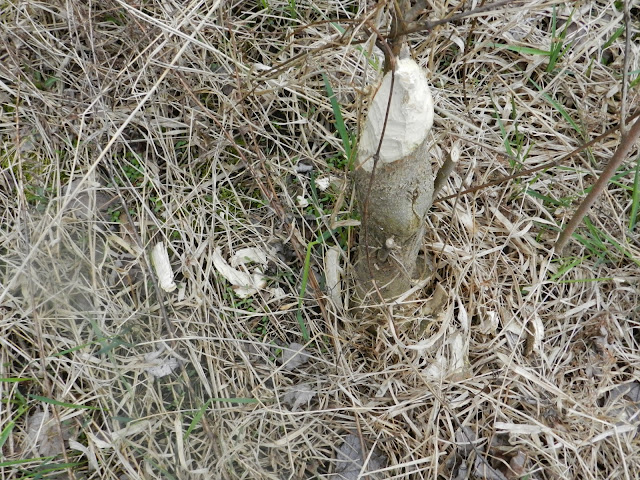 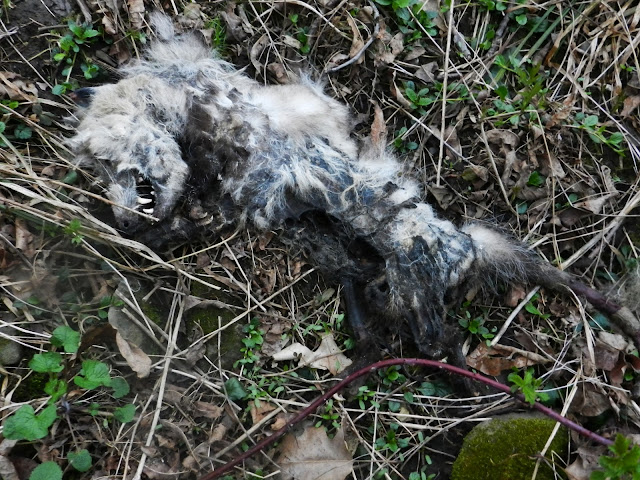 We next found this crunchy little guy...a dead opossum. 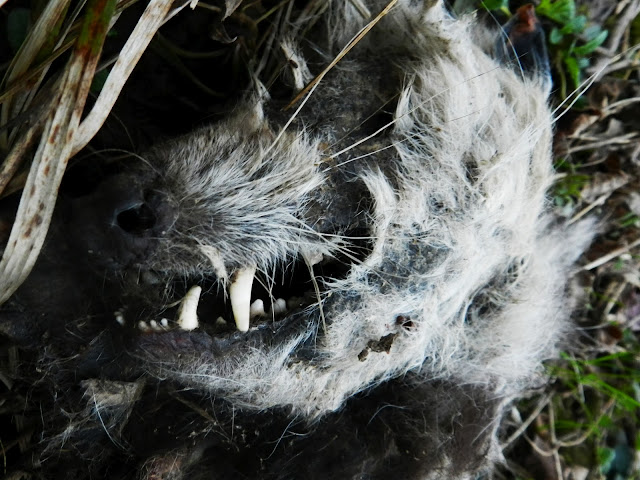 We were checking it out, trying to render whether it was worth decapitating for the skull or not. I flipped it over with a stick, and uncovered teeming white maggots, AND got a nose full of decaying animal odor. I had to walk away, gagging, before I lost it...and found... 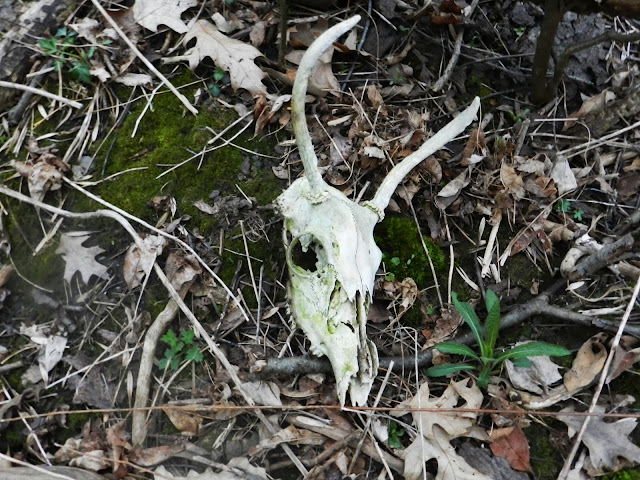 THE GRAND PRIZE! I not only found antlers (although little), but a WTD skull! I think it's so cute! 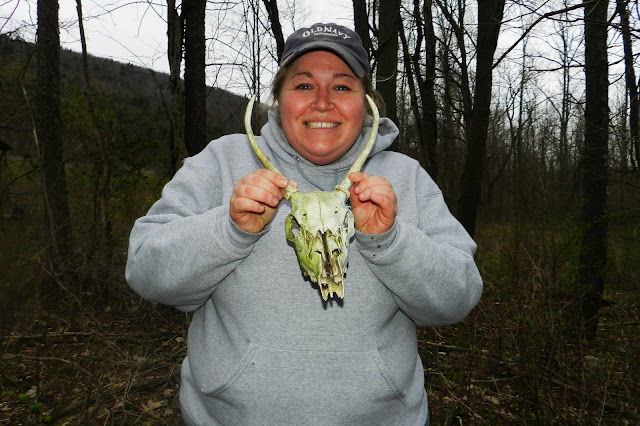 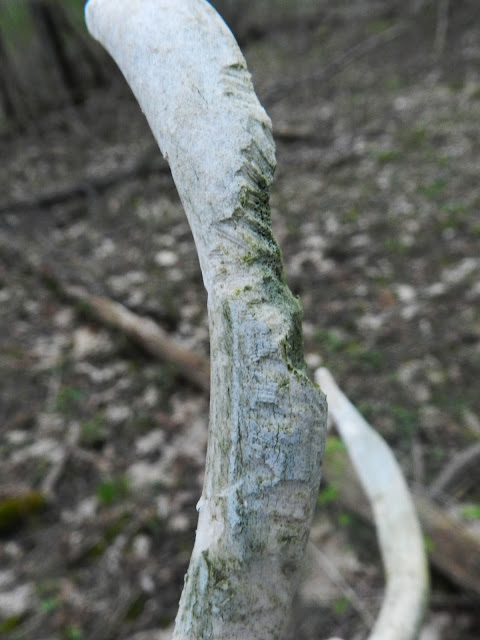 Again, chewing! I wonder if there's a way to ID chew marks on bones. I know in Paul Rezendes' "Tracking & the Art of Seeing" book, and in Mark Elbroch's "Mammal Tracks & Signs" they both list ways to ID chewing on various nuts. Perhaps this calls for some additional reading! 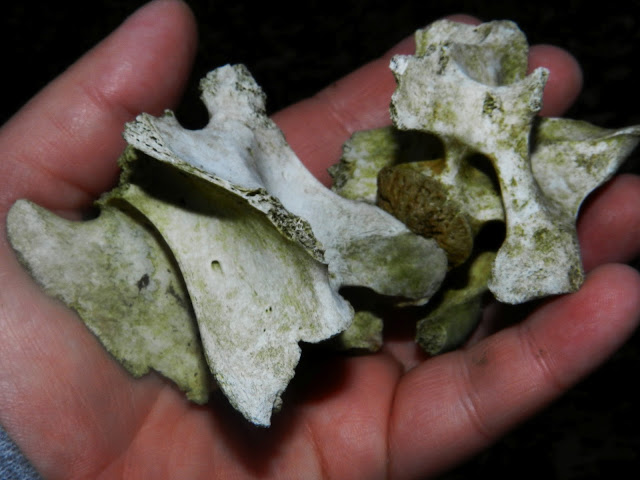 A few vertebrae, also probably once belonging to the WTD. 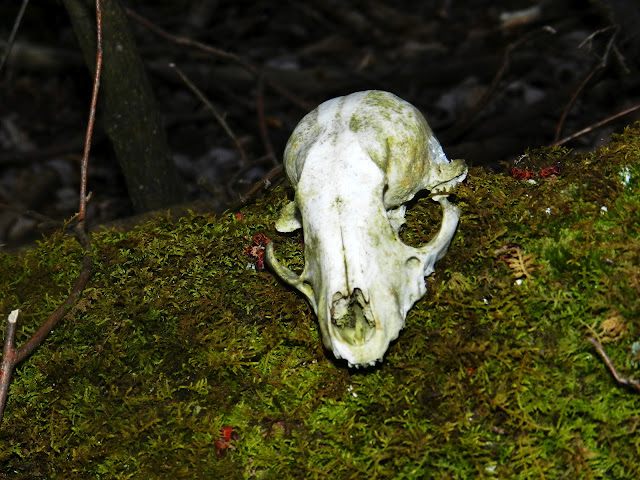 And my final find of the evening was this skull perched on top of a mossy root. My first inclination is to say raccoon, but I try to not just SEE something and call it immediately. Unless I'm really sure of what it is. I have always had the habit of opening my mouth first, then thinking as the words flow out. I'm trying to kick that habit :) So my last experience with a coon skull that was found in the woods, had a HUGE saggital crest. This one is totally smooth. Another feature that's puzzling me is the 'U' shaped feature on on top of the skull. It looks SO much like a gray fox skull! According to Peterson's "Mammals of North America" guide, both coon and gray fox skulls average 5" in length. This skull is about 4.25" long. The snout on it though, is pretty short as compared to the skull plate in Peterson's. So I don't know, it's probably a raccoon, but I'm just too skeptical to ID most of what I find at first guess.
I'm not sure if you can tell in this picture or not, but it's getting dark at this point. We decided to bushwhack back towards the channel trail, so we could make it back to the car in daylight. Little did we know, we had about a half mile of SWAMP to get through. Thick multi flora rose, and little hummocks that we hopped between. Then it started raining/snowing. I went back to my pictures when we got home last night, and looked at the time stamp on the above pictu﻿re. 6:03 pm. Right after I took this, was when we stupidly decided to bushwhack. We got back to the car at 8:08 pm. 2 hours "lost" in the swamp. I fell into the muck several times, and the last time I was waist deep, both legs in- so stupid! Thank God I was next to firm land and was able to "Rambo" my way out, as Mady put it. I didn't tell her this, but I was actually kind of nervous thinking that we really would get caught in the swamp in full dark and snow. Of course we just had jeans (wet), hiking boots (wet), and sweatshirts (wet) on. After some foul language, scratches, bruises...we made it out. Never a dull moment with this girl!
I can't wait to check my cameras Monday to see wet, be-draggled pictures of us schlepping back to the car.
FINALLY, we reached the car and as we were packing up, I heard this "chittering" noise. I thought it was bats, because there's a bat house on the building I was parked next to. It wasn't a bat, it was an Eastern Bluebird (EABL)! I don't know if this little guy was just weathering the storm, or if he was really building a nest here. I thought Bluebirds were cavity nesters, and after a quick internet search, I came across All About Birds, which noted that EABLs are cavity nesters. If I saw this spot, sans EABL, I would have thought a swallow had built it! 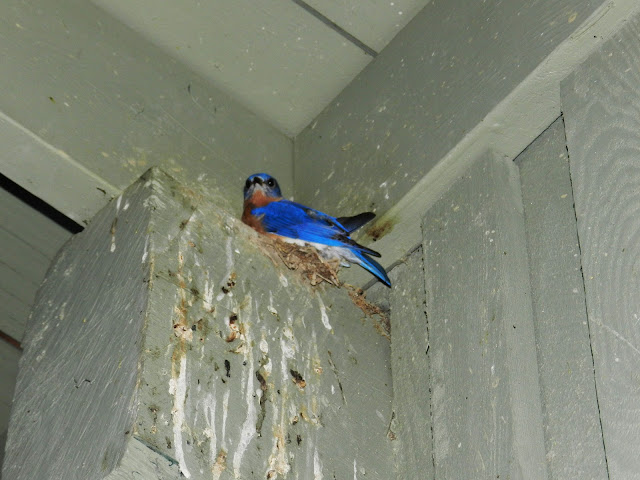 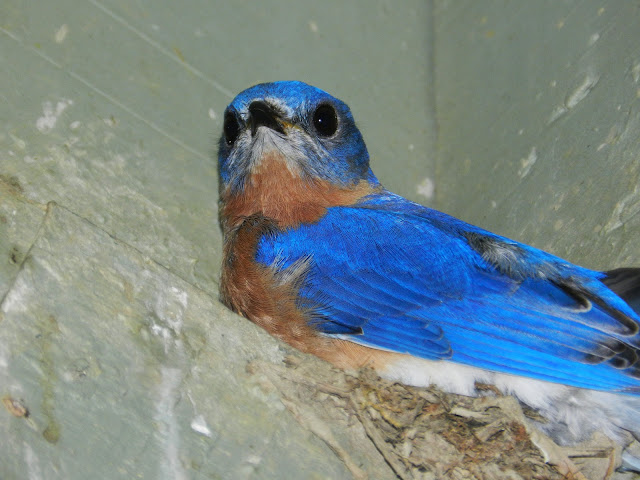 I'm so pleased with these last two pictures.
The ONLY editing I did was to tweak the contrast a bit, but that blue is ALL NATURAL!
Written by: Alyssa Johnson at 3/31/2012 09:42:00 PM Labels: Eastern Bluebird, Muller Field Station, Opossum, Raccoon, Rodents, Shed antlers, White-tailed deer