This is the longest gap between blog entries that I've had for a long while! And it's not for lack of content, I've just been running nonstop with school, work, presentations, meetings, and planning my summer in Alaska.

This is also the second entry I've written using the new interface of Blogger: not a fan. I'm one of those who resists change, I'm a creature of habit. Everything looks different, and I can't access all the features as easily as I did before. But, it is a free service, so I'm at Google's mercy :)

My last entry was on the Northeastern Natural History Conference that I was about to attend. It was held this year at the OnCenter in downtown Syracuse, NY. I've presented at 3 other conferences this school year, on the bear behavior study that I've been apart of. This was my favorite conference though. The other poster topics and presentations were so interesting, I wish I had had all 4 days to spend at the conference. 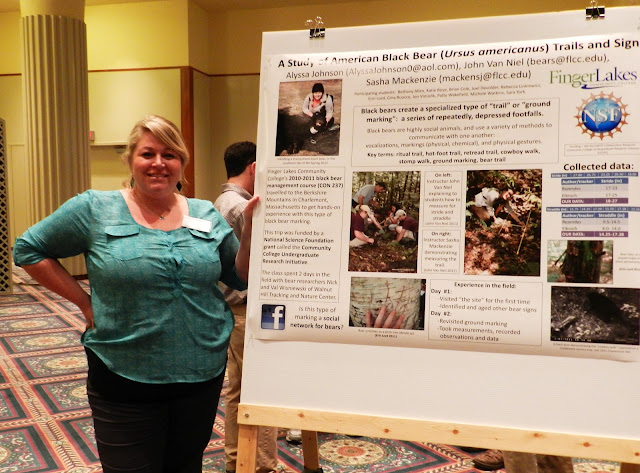 Myself and my lovely poster, photo thanks to friend and ex-classmate, Erin Lord! 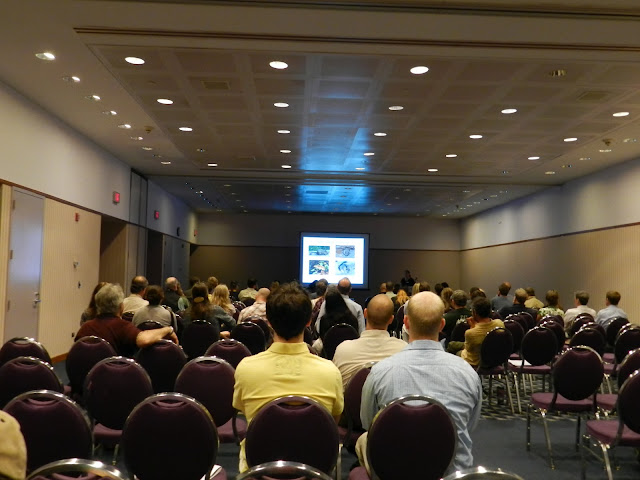 An oral presentation. There were 3 rooms set up with fresh presentations every 20 minutes. We were free to switch up rooms to check out the topics that we were most interested in. 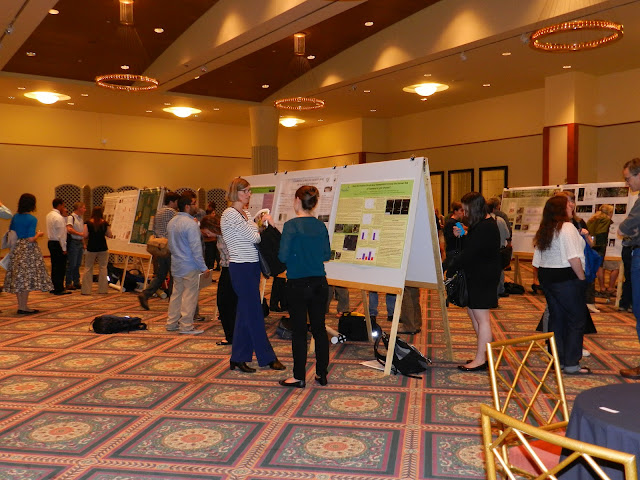 And then the poster session was set up in a ballroom, and everyone was free to mingle and chat. It was a great event!


And then, on Tuesday (4/17), I gave the oral version of the presentation at our college's field station in the evening. This program was open to the public, and advertised locally at the college and in the local newspapers. I really didn't know who to expect: students, local residents...not sure. Well, turns out that there are ALOT of locals that want to learn about bears! I had a full house of 38 people. It was so nice to present to people who came to hear ME specifically speak. At the other conferences, I was part of the group, but here people were interested in learning about the study I've been apart of and about our local bears and what they might be up to.

An older gentleman even gave me a plaster cast of a bear track that was made very close by to the field station. It was very thoughtful and an AWESOME souvenir of all the work I've been doing in a great location with my favorite animal. That track will probably travel with me to Alaska :)

Before the presentation, I stopped down by one of the out buildings to check on my materials that I store there for my camera trap study that's been going on. I was with my friend Leslie, and I was telling her about how last time I was there, I saw a bat on the building clinging to the bottom of the bat house (seen here). And she says to me..."oh, like THAT one?"....and there was yet another (or the same?) bat clinging to one of the canoes laying there. I ran to the car, and was able to get the following picture of the little guy...as he kind of flopped off the canoe into the grass. 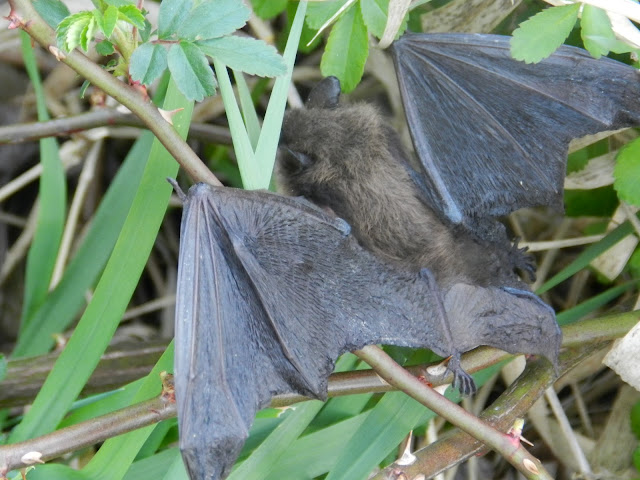 I had thick leather work gloves on, and tried to pick him up...he didn't really like that and squealed at me. So I put him back down and he kind of climbed through the tall grass under a canoe. I don't have MUCH experience with bats, but I don't think this one was well.


And then finally, for now, the following pictures are from the field station as well, last Friday the 13th. We often host school groups who want to come out for a field trip, and last Friday (and tomorrow as well) I was able to help out with a home-schooled group of kids.

We did a camera-trap excercise taken adapted from the Taking Action Opportunities camera trap curriculum from Minnesota. For all of you out there using cameras and working with kids (K12 and up), you should check this out. It's really neat, and all the "hard" work is done for you! 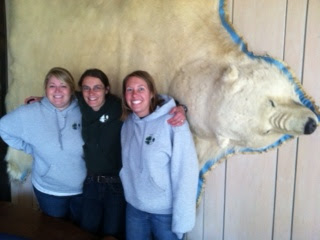 Myself, Sasha and Nadia...the team for the day :)
And that polar bear is a WHOLE other blog entry waiting to be written...


Anyway, I wish I could post pics of the kids and us working, but to ensure privacy of the kids I'm refraining from doing so. But, on our way to checking a camera, we walked past a Bluebird/Swallow box. There were a pair of Tree Swallows actively collecting materials to build a nest and I had my personal camera at the ready. 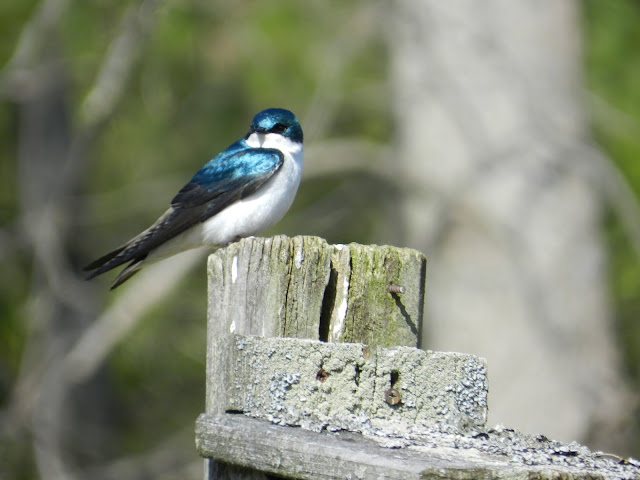 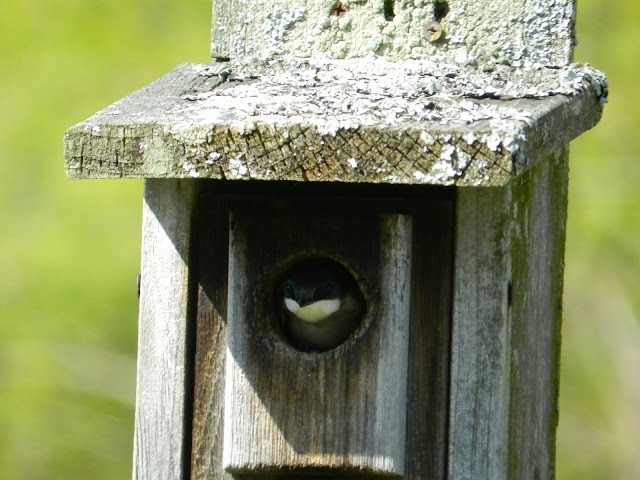 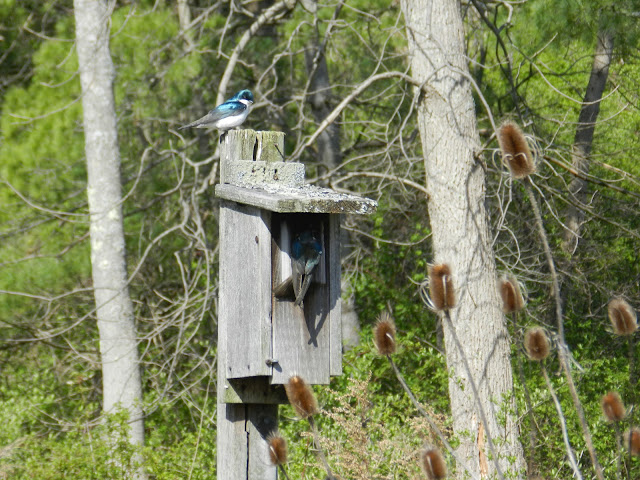 I could have stood there ALL day watching them dancing around, bringing in dry vegetation and happily existing. Someone found a downy Goose feather, and we put the birds to the test. In one of my college classes, Conservation Field Camp, we're given feathers and then told to stand in a field ringed by nest boxes and let them fly in the breeze. The Swallows dive bomb for the feathers to line their nests. It's so cool to watch. So, we had the child who found the feather (and we were standing probably about 20 feet from the box) hold that fluff up and let it fly...and true to our word, one of them swooped down and grabbed it! The kids LOVED it, and then wanted to hunt for more feathers...but we were on a schedule so we had to move on. BUT, maybe that little moment inspired them to try at home!

That's all for now :) I have probably 3 or 4 entries backed up in my head waiting to be written and for photos to be sorted. Stay tuned for bear bites, a field trip to Montezuma National Wildlife Refuge, and camera trap results from the East Hill Campus!
Written by: Alyssa Johnson at 4/19/2012 11:04:00 PM Labels: Bat, Northeast Natural History Conference 2012, Tree Swallow