This past Wednesday, the 18th, our Wildlife Society Club rallied together for a field trip to our local National Wildlife Refuge: Montezuma. We were able to snag a college van, and headed out mid afternoon. It was a perfect day for birding, which was the theme for the day. MNWR is known for it's migratory birds that take a stop off the flyway during migration. Of course there are resident birds year round, but we're able to see many different water birds that we might not without the refuge.

So under sunny, mild skies our first stop, just outside of MNWR was at a Bald Eagle nest. This nest was naturally made by the birds on top of a utility structure right at the North end of Cayuga Lake at the outlet. As we pulled up, we were excited to see an adult Eagle up there. As we stood and watched we saw 2 brown fuzzy heads pop up, and then another adult off in the distance, perching in nearby trees. 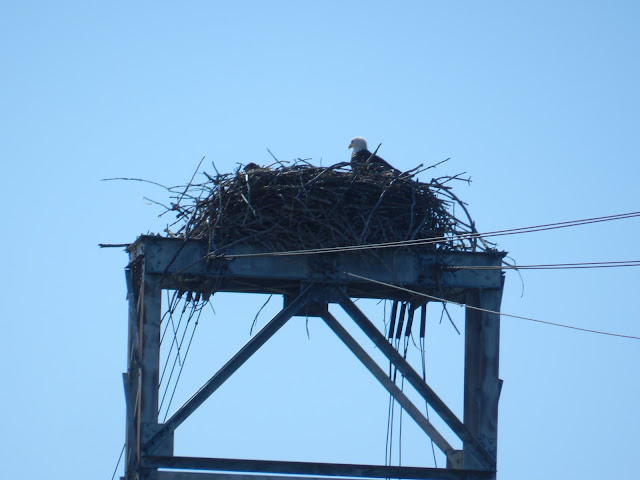 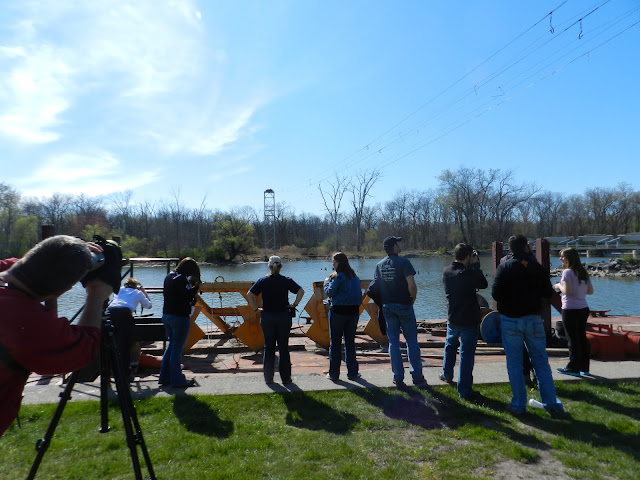 Club members checking out the nest, and some of the students to the right are watching the other adult soaring above us. 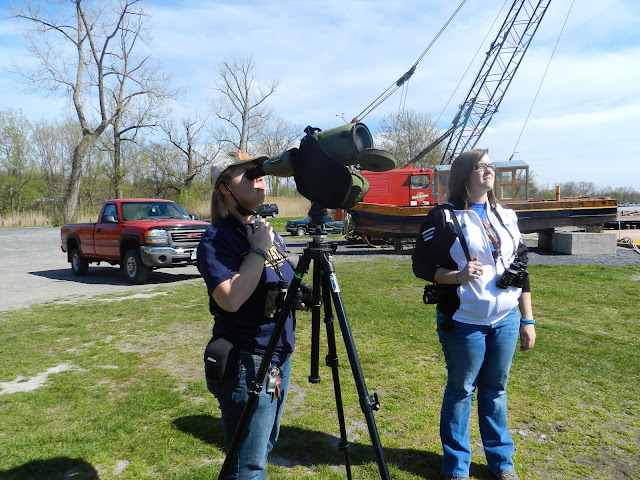 Kelly and Delicia using the scope John brought for us. 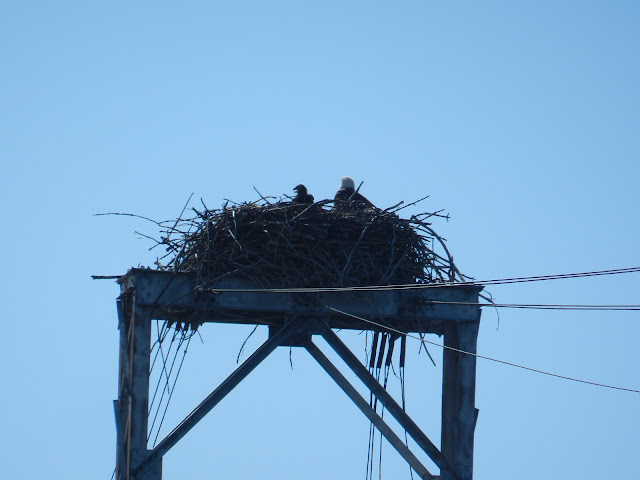 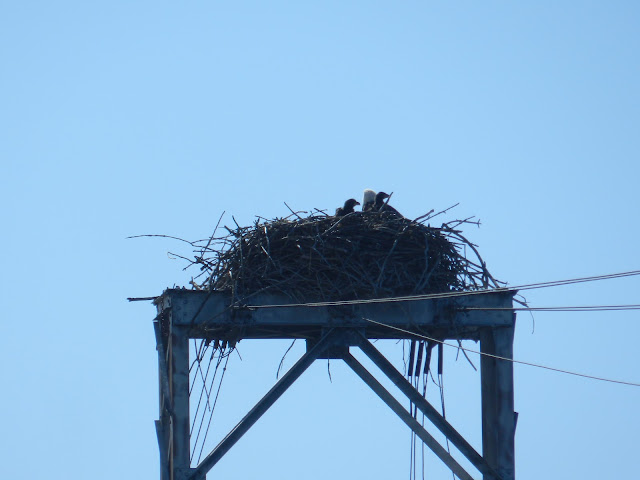 I recently bought a beautiful Nikon with a 36x zoom, but that camera did not take this picture. The club's VP, Joe, took this picture with his smart phone lined up to the scope we had set up. A little bit of ingenuity got the shot!

And finally, both adults! The one in flight has a stick that he/she is bringing back to the nest to add to it. I'm sure with 2 rambunctious Eaglets up there, some of the structure of the nest is lost.

After a half hour or so at the viewing site, we had to get going. We headed back to MNWR and stopped at the Visitor's Center to look out over the first marsh flat.

As we walked up to the observation deck, we noticed a little Tree Swallow on the railing. It didn't fly away for a few minutes, and allowed us to get some great pictures! 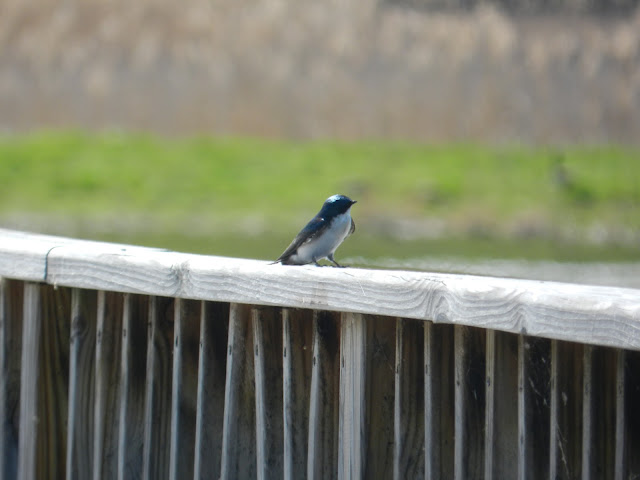 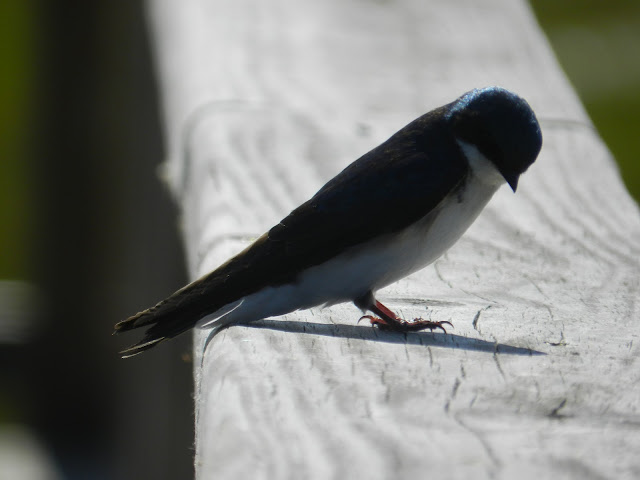 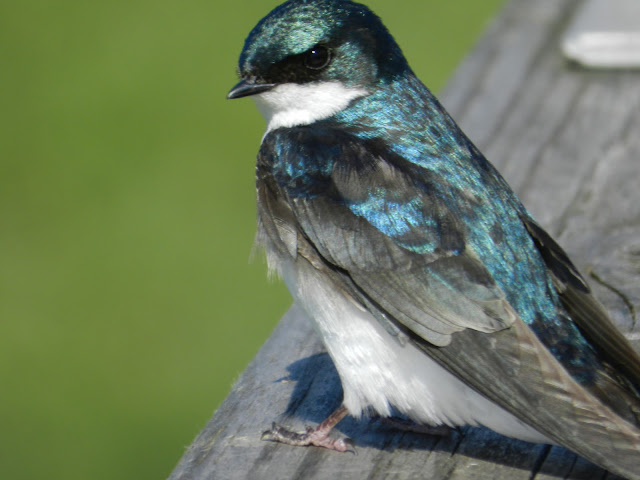 I love the markings on the face, I didn't realize that they had a 'mask' like the raccoon...it makes this little bird look so stern!

We then loaded back up into the van to do the several mile "wildlife drive" through the refuge. This refuge is known for migratory birds using the land as a "stop-over", and that's what we saw! 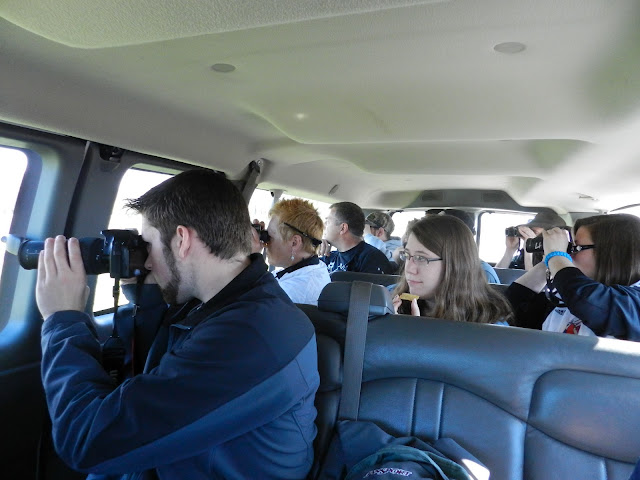 Friend, classmates, and students! And our tour guide, John, is in there too somewhere :) 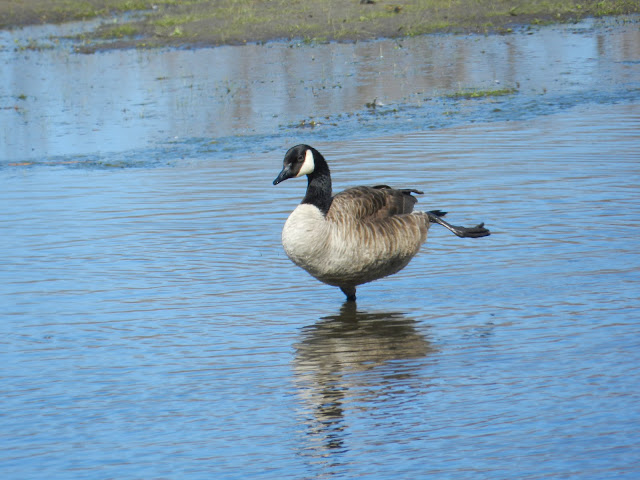 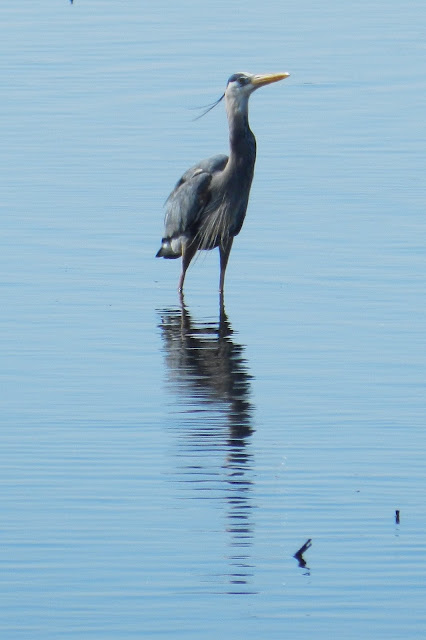 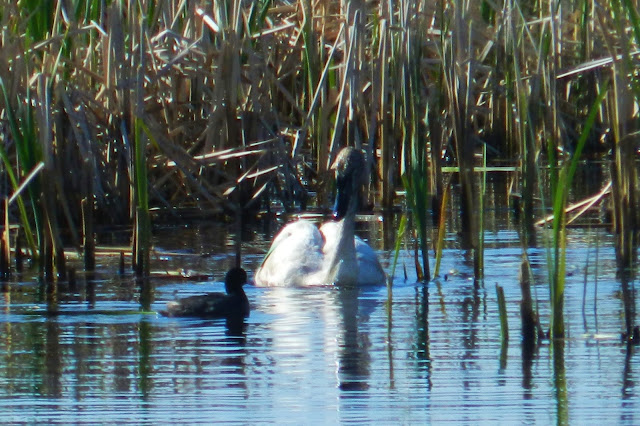 Trumpeter Swan and an American Coot 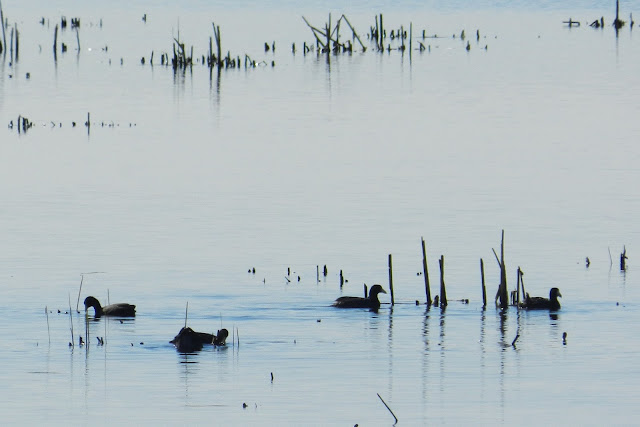 Coots! One of my favorites! I would love to handle one someday... 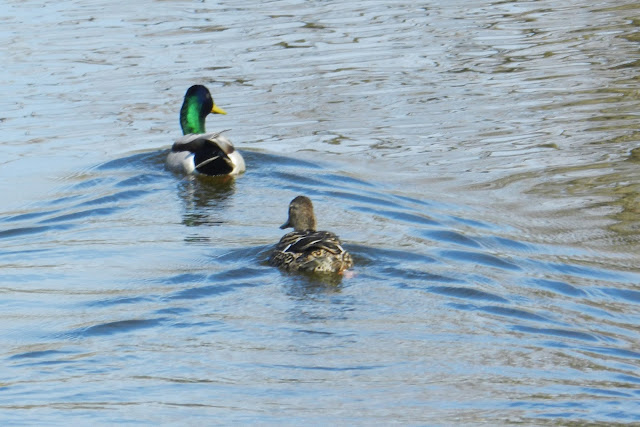 A male and female Mallard 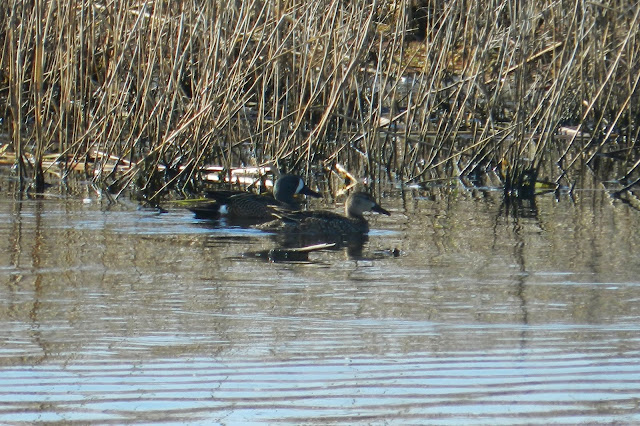 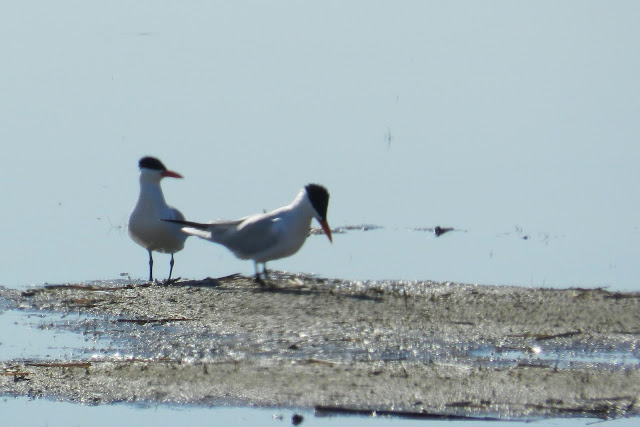 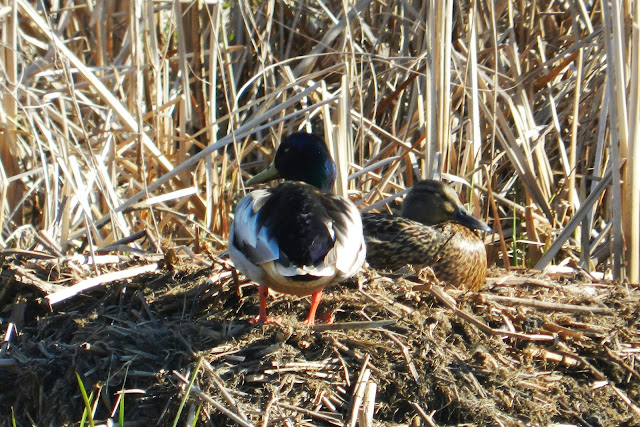 Pair of Mallards on a nest, which also happens to be on top of a muskrat lodge. 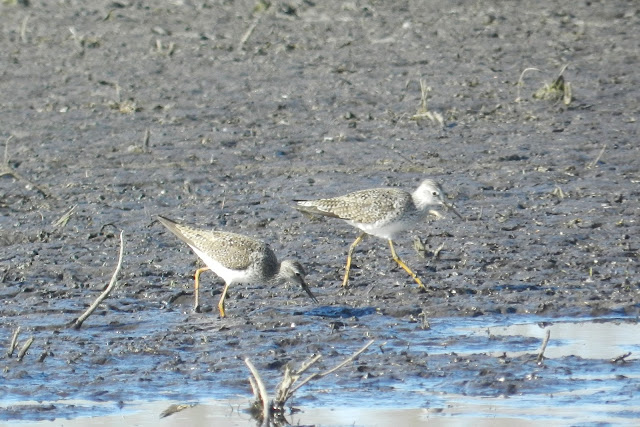 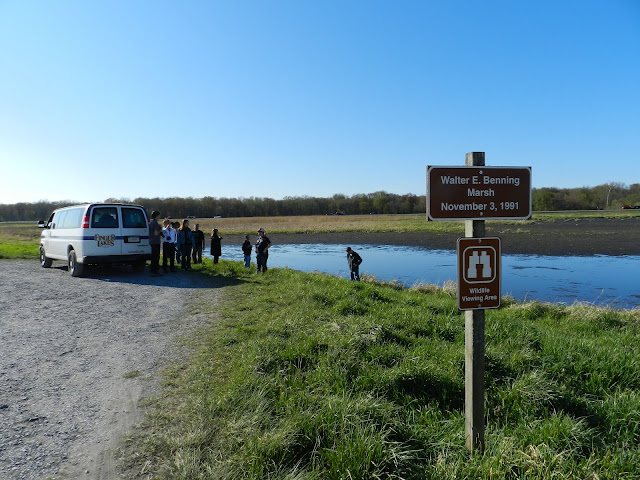 A brief stop at one of the pull-offs. 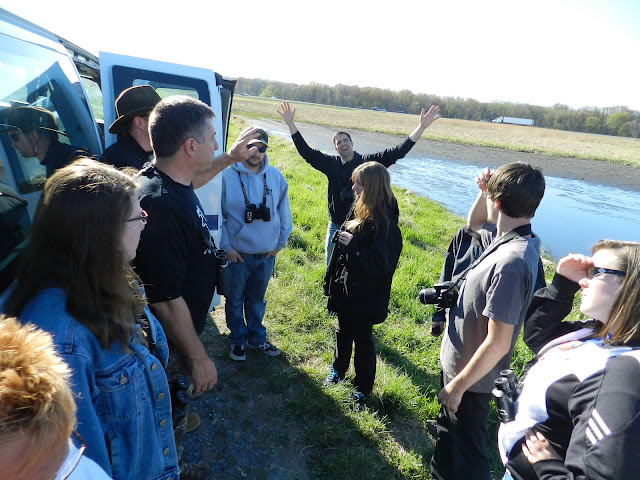 And some of us are very excited to be at the refuge!
In the background you might be able to pick out a tractor trailer. MNWR is cut right down the middle by Interstate 90. This has been pretty controversial, but human necessity out-won the wildlife and precious ecosystems that were there first.

A panorama from the top of an observation tower at Tschache Pool.

And that was our final stop at Montezuma for the day!

After we regrouped back at the visitor's center, John invited us all to his house for dinner and a dusk walk. He lives nearby and owns 50 acres of old farm land that has been allowed to run wild. Because it is in the earlier stages of succession, it's brushy and shrubby, but still open more or less, and John mows trails through it. The point of this dusk walk was to look for the Woodcock, which is an awesome springtime bird to look for.﻿

Unfortunately I didn't get any pictures of the Woodcock, but we did see and hear one. The sun was setting, and I didn't even both trying to play with settings on my camera. I didn't want to miss any of the action! The following picture though is one of John's that he got on his property a few years ago.

How awesome is this? An adult and baby caught at just the right time of year! John wrote an entry about this last year, to check that out visit: Sky Dance: An April Tradition. 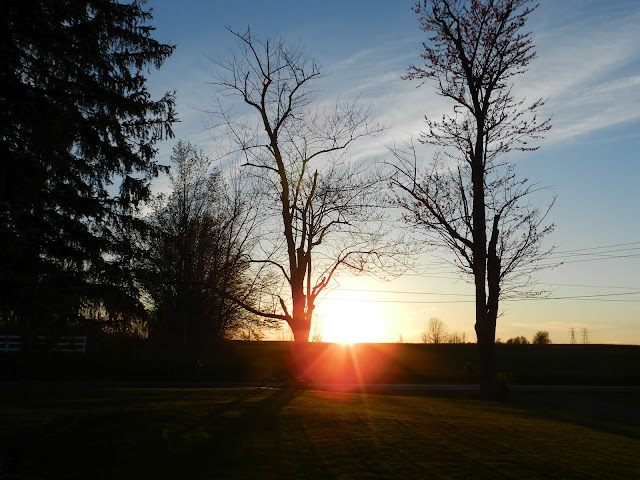 As the sun hit the horizon we headed out for our walk to be in place for when the birds came out to do their "dance"... 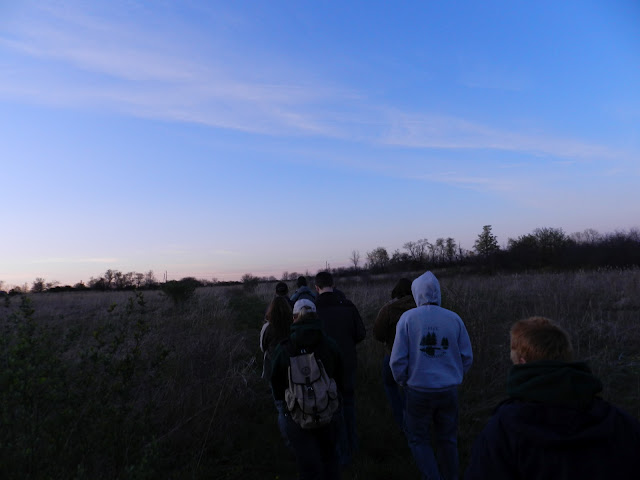 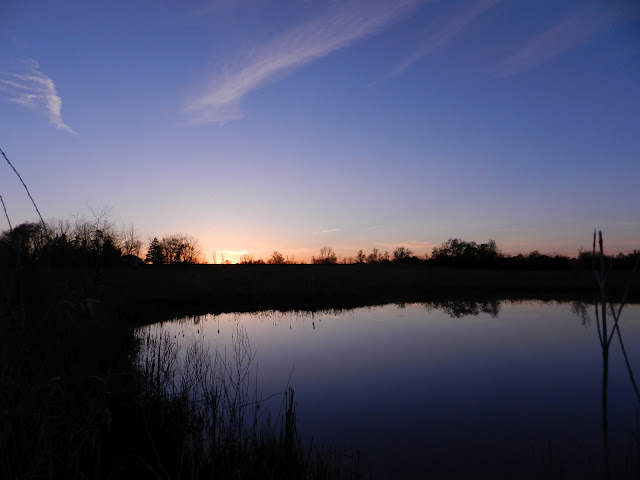 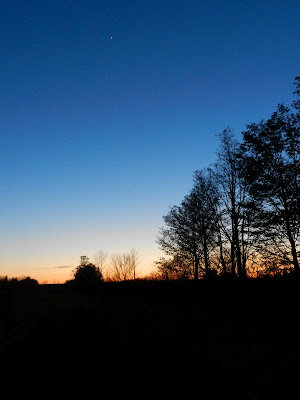 Two years ago when I started at Finger Lakes Community College, the first class I was in was "Introduction to Environmental Conservation" taught by John. In this course, John intruduced us to Aldo Leopold who writes about the Woodcock and its 'spring dance' in A Sand County Almanac. The read was a hard one, if anyone has read or tried to read Sand County before. I'm a 'reader', always in the middle of a book for leisure, but I struggled getting through that book. Over this past winter I picked it up again and read through it. It's still a tough book, but the content meant so much more to me now being 2 years deep into conservation-minded life. Visiting John's home, and finding the Woodcock performing this annual 'dance', just brought my time here full circle. It was such a fun day with friends, classmates, and a professor that goes out of his way to educate and connect with his students.

This was one of my last events involved with FLCC's Wildlife Society, but I'm glad to have been apart of it and to experience days and nights like this.