Since the beginning of February I've had 4 Cuddeback Attack IR cameras mounted and "soaking", as some will say, capturing any and all living creatures wandering in front of the sets. Next week on Monday, I will be pulling the cameras, and collecting the final pictures. It's bittersweet. I love using the cameras for personal enjoyment, and to see who's prowling around when I'm not there. But this study has taken alot of work and "thinking" time. I still have half of the work left to do, all of the compilation, analysis, paperwriting, and presenting of the findings to do during the busiest time of the semester.

I hope I'm afforded the opportunity to present before my time at this college is up! Though, I think I may have opportunity to continue this type of work at SUNY Cobleskill, where I'm heading next.

Anyway, last Sunday (April 22, 2012) we had a freak spring storm. A Nor'easter blew up from somewhere, and dumped 1-10" of wet snow on the Finger Lakes region. Where I live, North/central Finger Lakes, we got probably 3-4". I woke up to a winter wonderland and a beautiful emergency text notifcation from the college: SNOW DAY! I don't care how old you are, a snow day is a gift. A friend of mine a bit more South than me, and in higher elevation got 8" of wet HEAVY snow. Even though school was cancelled, my cameras were waiting for me still at the field station, which was south and higher in elevation...


...I expected the worst, but I drive an AWD SUV, so I drove down. Suprisingly, I think most of it melted off by the time I got there late in the afternoon, even though it was still snowing a bit. Our weather was SO screwy this spring. Last Friday, 2-3 days before this storm, it was in the 80's and sunny and breezy...our poor fruit farmers!


As I approached the first camera, I held my breath. I haven't been to check the cameras in 2 weeks. Last week I was at the 2012 Northeastern Natural History Conference so I asked a classmate of mine if  he wouldn't mind checking them for me, as he has in the past. So, thanks to Joe! I was holding my breath, as I always do upon approach, because of A) hoping my camera is still there, B) it's still hanging as I left it, and C) still running.  Check, check, check. As you can see, behind the camera there is quite a bit of standing water behind the tree it's mounted on. Also, the scent pad was swollen with water and was quite disgusting. I wonder if/how this impacted any movements of the critters who live nearby? I have many pictures and video of medium sized mammals like raccoon and opossum coming from behind the camera, or going behind the camera, but I'm not sure if they will in 5" of water. The following are the better pictures collected.

Camera A yielded 16 pictures from the past 2 weeks. 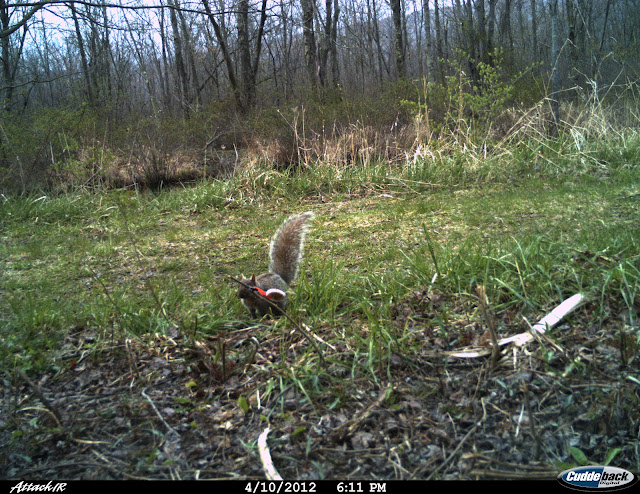 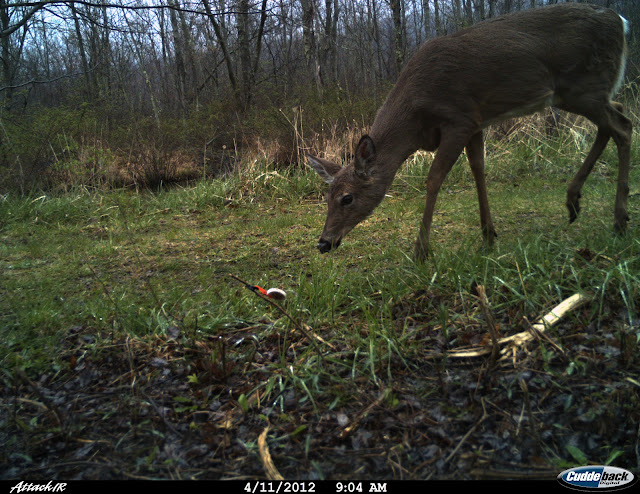 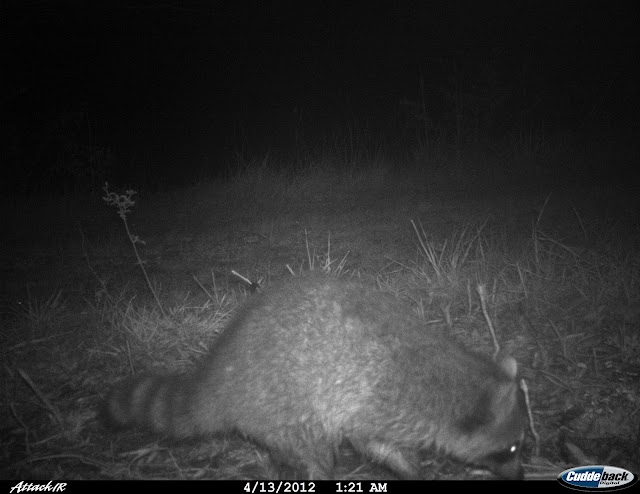 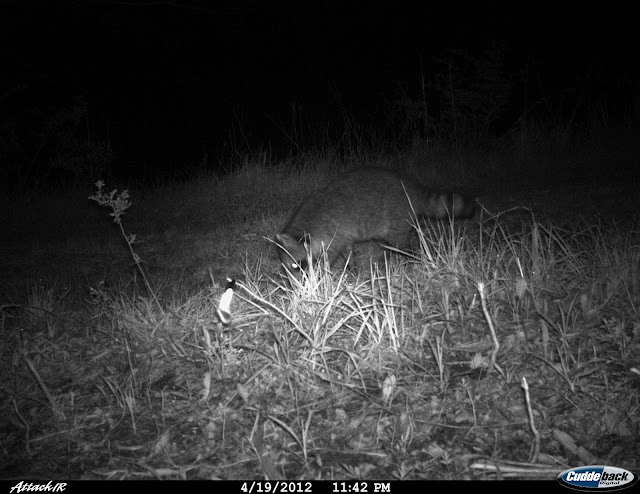 Camera B looked ok, no standing water here...just some slushy snow. This camera had a whopping 39 images waiting for me! I rarely get 20 images on a camera a week, which is what would have been on there for just one week, and especially on this camera. It's not "hot", if you know what I mean.... I've been hoping and dreaming for a black bear, which I have repeatedly and recently found sign of here at the field station. It is bear country, they are out of the dens, and I'm using stinky-smelly scent, so the conditions should be right, right? I'd even take another river otter or 2! I just got my first 3 weeks ago, which was awesome. To check them out, visit this entry: Two New Critters!

I have to be honest, I didn't get either of those animals...BUT I did get a new species! Not a mammal, so it doesn't directly pertain to my study, but wicked cool to watch through the lens of a camera. 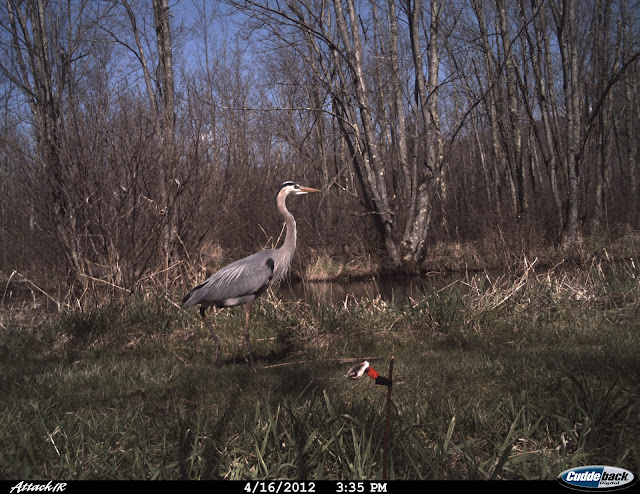 BAM!
A Great Blue Heron, isn't it gorgeous? One of my favorite birds. I'd love to handle one someday, I'm sure it would be a trip, but I'd love to do it! 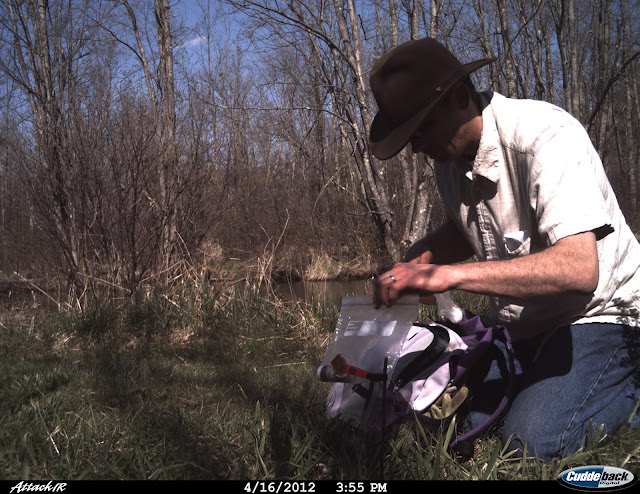 And Joe, thanks Joe for the help! 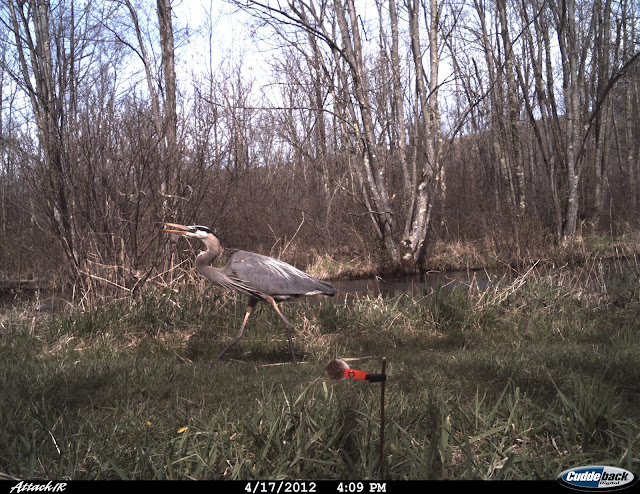 GBH vocalizing? Or swallowing something? 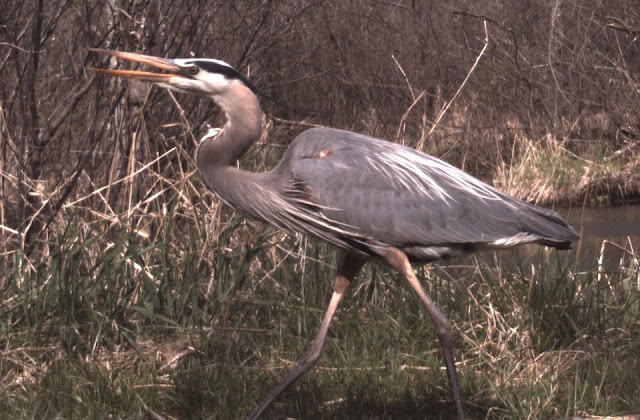 In this video, this GBH is clearly fishing! I'm thinking bullhead? 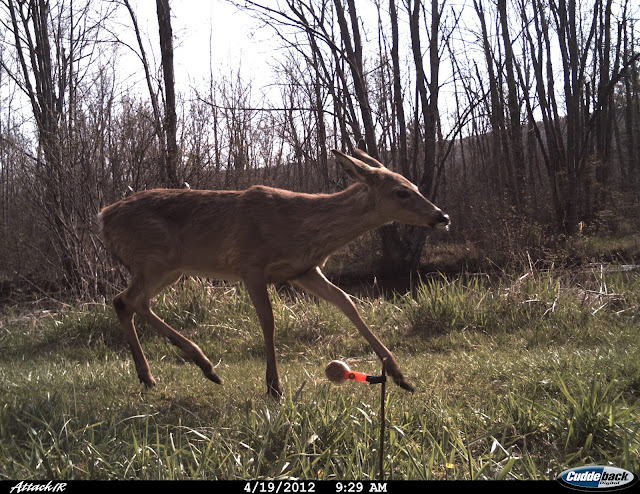 One white-tail? Just watch the following video. This is why I LOVE the video feature of the Attack's!


Lot's of snow here! Not sure why, and there's some standing water as well behind the camera. This camera isn't really that "hot" usually, and this time over 2 weeks yielded only 12 pictures...typical.

I was again hopeful that I got the elusive local Ursid or Lontra canadensis...but nope. 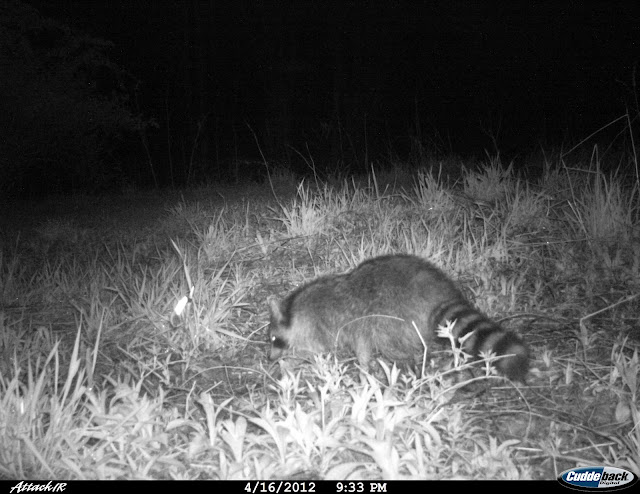 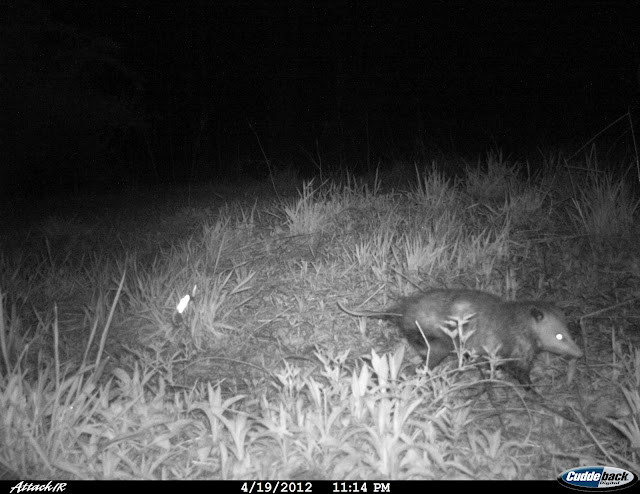 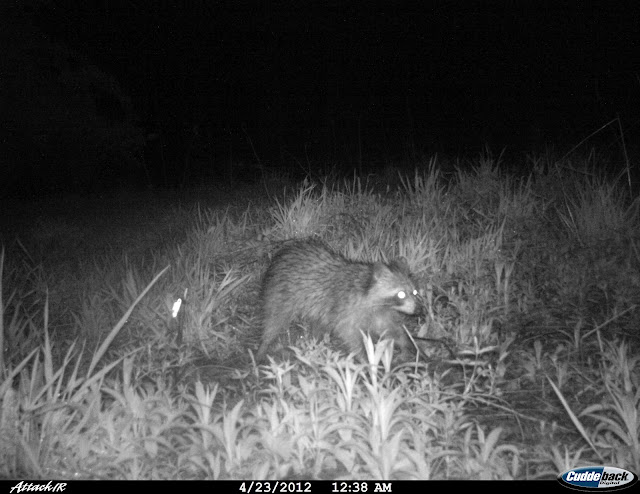 A soggy raccoon...was it in the water? Or was it raining...I wonder. 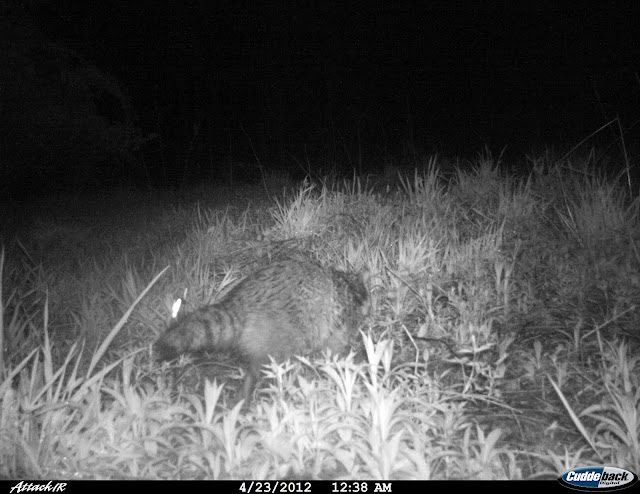 The final camera, 'D', is usually my hot spot. but this time: 9 images. 9! I couldn't believe it. Usually I get a ton of red foxes trotting back and forth, and these past two weeks, not that many. The grass in front of the camera I noticed is getting higher, maybe that's blocking a bit of the action on the trail. The mown trail is what I'm standing on, and about 7 feet wide.

I'm really interested in getting all of this data on the spreadsheet and starting to play with it, and watching for trends. Where have my fox friends gone? 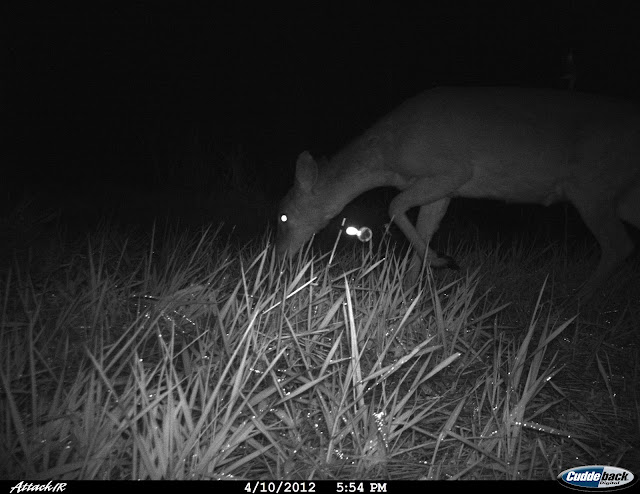 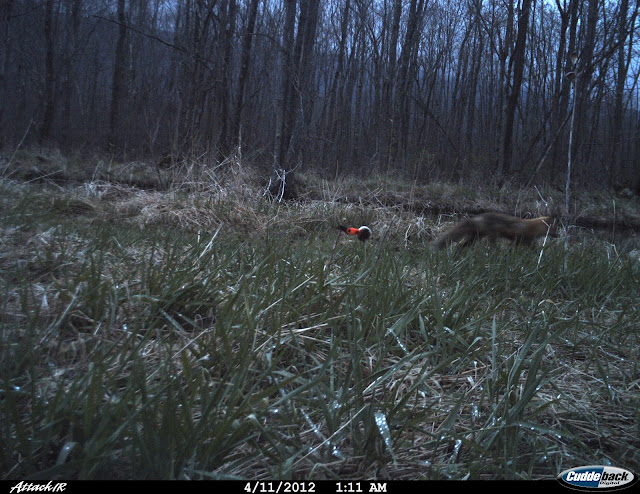 The only red fox I got! 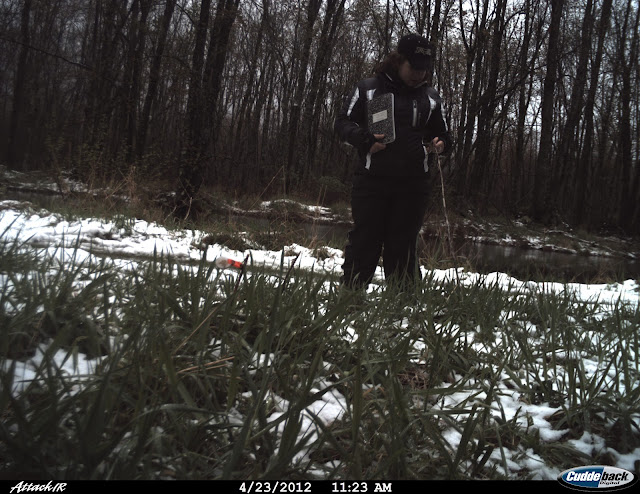 My friend and future roomie Mady, who came to hang out for the day since we didn't have class! Her job was to carry my journal for me :)

That's it for the camera pics. Kind of lame for 2 weeks worth of images. I wonder where everyone is? Like I said earlier, it has been warmer than usual, up until the Nor'easter over the weekend. This week it has been cold and rainy, so we'll see next week when I pull the cameras.

I'm backed up about 3 or 4 entries, and I wanted to cram one in before this weekend. I'm heading off to the high peaks region of the Adirondack Mountains for a canoeing and camping trip. This is my fulfillment for a P.E. credit that I need for my degree, and of course I jumped at the chance. The trip is being led by 2 of my favorite professors, and I'm going with a bunch of fun friends who are also conservation majors. We'll be canoeing down the Raquette River, of which I've led trips of kids down this very stretch of river myself, for about 10 miles, and then tenting out. I just made a venison and bear meat stew for Saturday night, and I can't wait to eat it! I've never had bear...and I feel it's fitting to eat it while canoeing and camping in the backcountry.

Lastly, I just went and visited my new college that I'm transferring to this fall: the State University of New York at Cobleskill yesterday to get some administrative stuff figured out. I'm so excited about my fall schedule: 19 credits, but very much looking forward to it.