The Adirondacks in April

The Adirondack Mountains are hands down, my favorite place to visit. I've been to Montana, Colorado, the Caribbean, Louisiana, the Outer Banks, Maine...all over, and I just love the Adirondacks the most. It is a beautiful place to be, but so are the Rockies, the ocean, the islands, etc...but the ADKs have family and friend memories that literally started in 1987. I think I've gone up there every year since.

This past weekend I went up there with the Wilderness Camping class that I'm enrolled in, a 1CR PE course. Camping for college credit? Sign me up! Two of my favorite professors were instructing and several of my good friends were also enrolled, so I was really looking forward to a weekend away, even if it was for class! 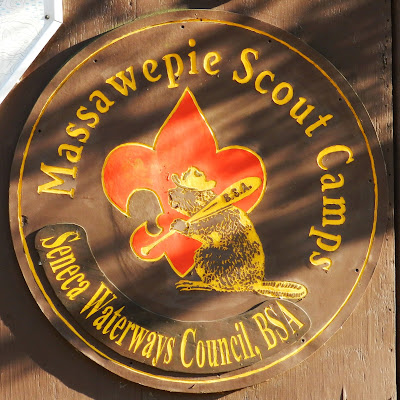 We camped at this Boy Scout camp which is acres and acres of beautiful land. Although there were heated lodges, we tented. 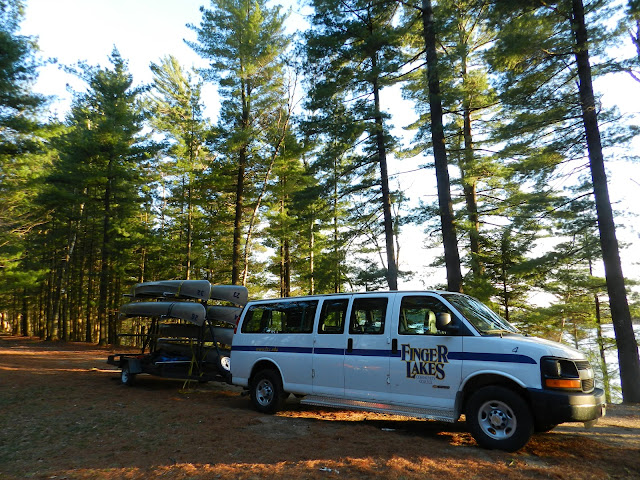 Once we got to the campsite Friday night, we had to unload and set up tents. Not shown in this picture, but under the cover of the pines there was snow on the ground. Just a dusting, but just enough for a very chilly night spent in a tent! 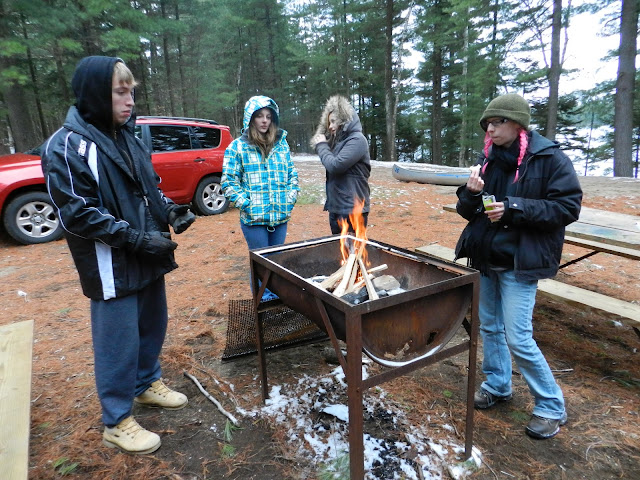 Friday night we hung out around the fire...grilled some dinner, listened to the loons calling on the lake, and then went to warm our sleeping bags. 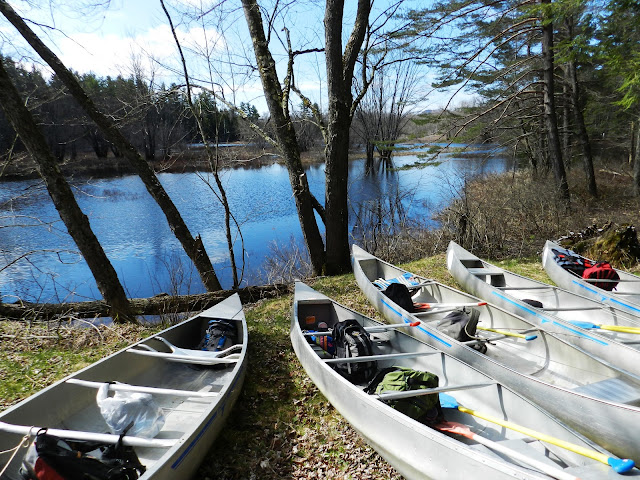 Saturday we got up and got ready to paddle 14 miles down the Raquette River! I've paddled sections of this river many times, but never leisurely with peers. It's always been a marathon paddle with young campers during the summers I worked at the summer camp on Raquette Lake. 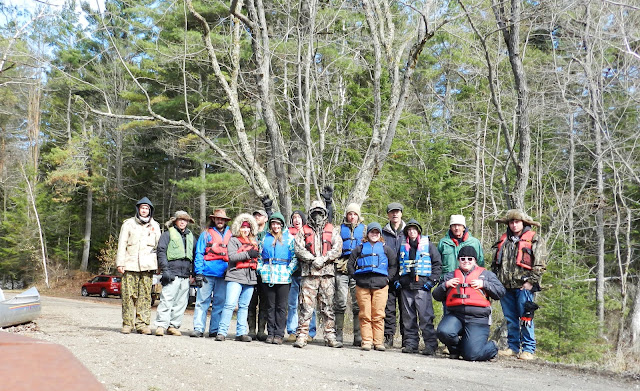 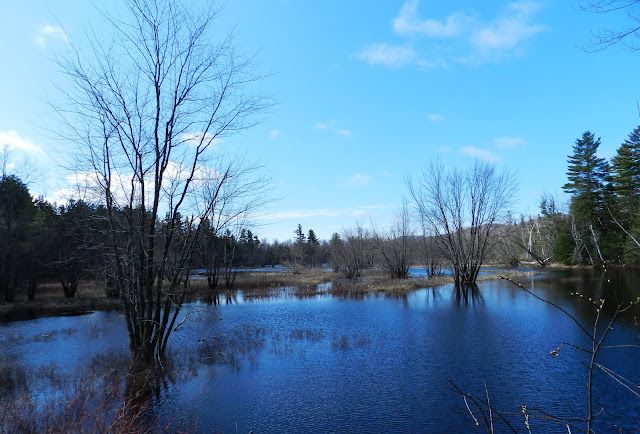 And then we were off!

I don't have any pictures from the adventure, unfortunately...but I was the steer-er of the canoe, and didn't want to risk fumbling with my new camera over the water. It's too new for that! We didn't really see much (too cold?!), none of the leaves were out, and those of us who were fishing didn't catch anything.

That night though, some of us went on a hike, a quest really, to find porcupine sign. I am quite enamored with our 2nd largest rodent of NY and have been told over and over that we "don't have them in the Finger Lakes", so I thought that the ADKs were a better place to look. A bit more boreal and undeveloped. We didn't look very long or hard, so nothing to report on that front either. ONE DAY I will have the best entry to write about porcupines! We did find an awesome beaver pond though. There were 2 quite large, thick, dense, high beaver dams....that had been breached. I'm guessing by the management of the Boy Scout Camp...the water level had seemed to be quite higher than it was when we visited. We thought maybe it had been abandoned, but we found some fresh chews in the water. 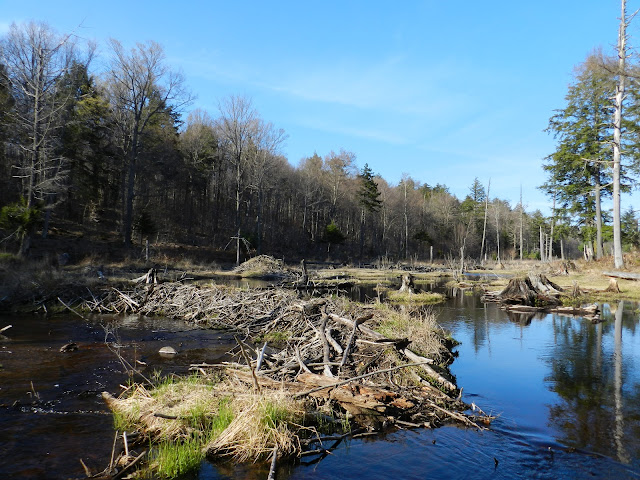 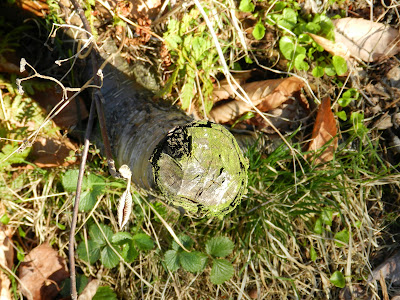 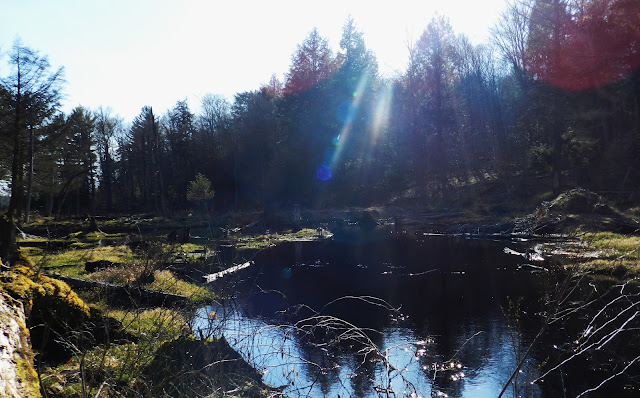 And then upstream, the lake that the beaver ponds were empyting, held a couple of Common Loons. I took several pictures of the pair, but they were far away and beyond some vegetation. The best picture I got is below...my favorite bird! 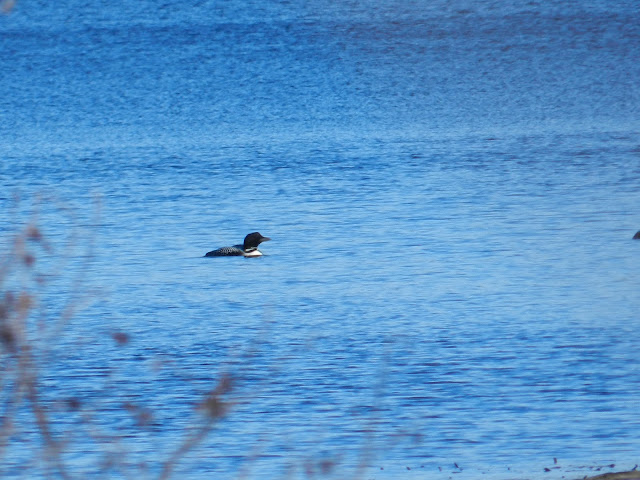 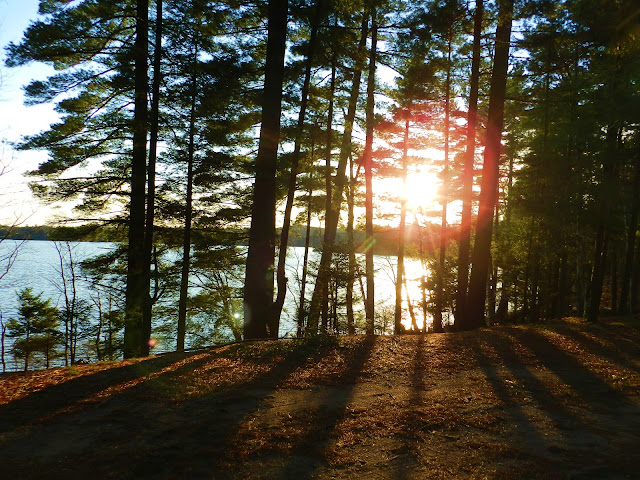 Our evening Saturday was much more enjoyable than Friday night. Still very cold (20s*F), but not snowing...and we were very tired so that made sleep come that much faster! 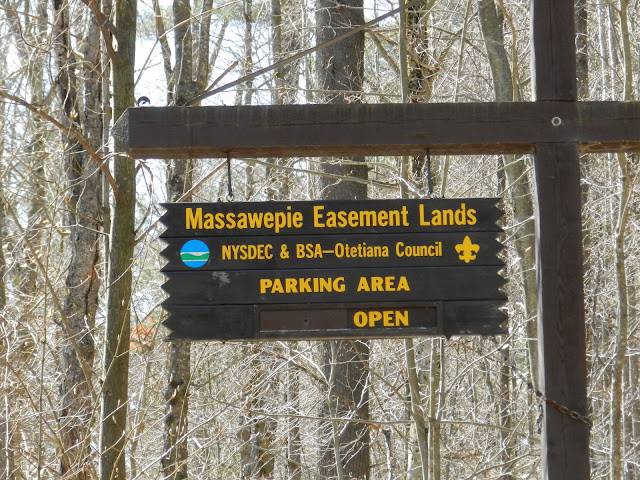 The next morning, we packed all of our belongings up and shoved them in the van (it fit so much better coming than going!), and made a few stops before leaving the Camp property. 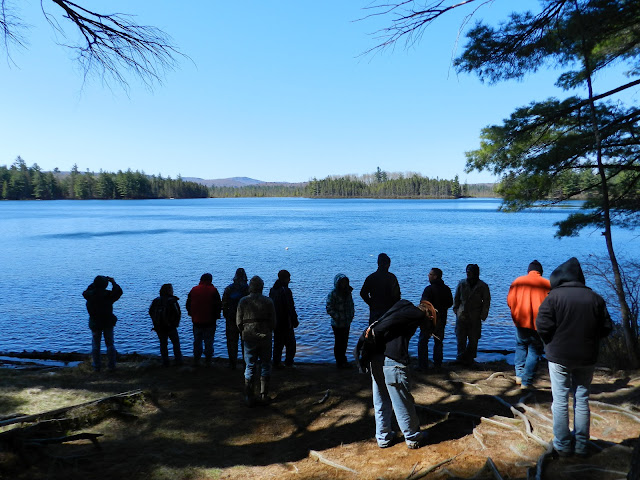 A truly bluebird morning in the ADKs... 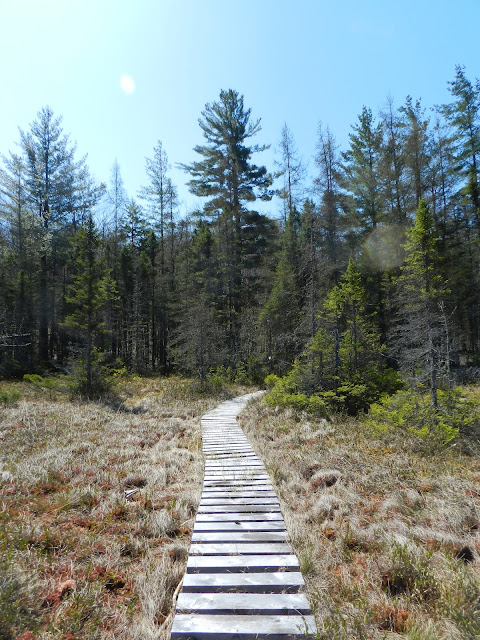 Our instructors next took us to a bog down a short boardwalk. I love bogs, there are so many neat plants and animals that hang out in bogs...we were a little early in the season to see anything really flourishing, but some of the bog plants are evergreen or were leftover from last growing season. 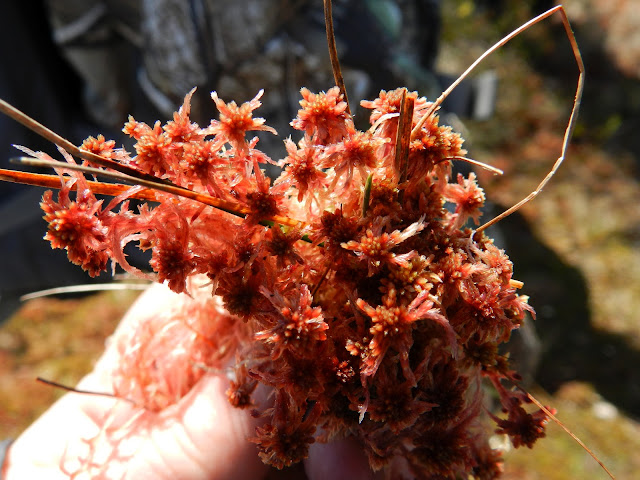 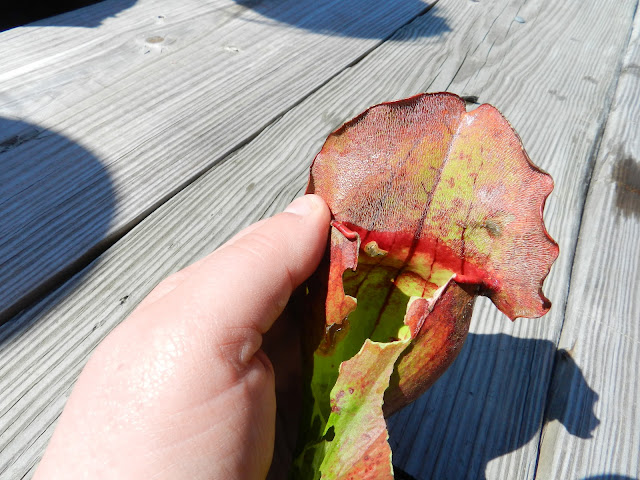 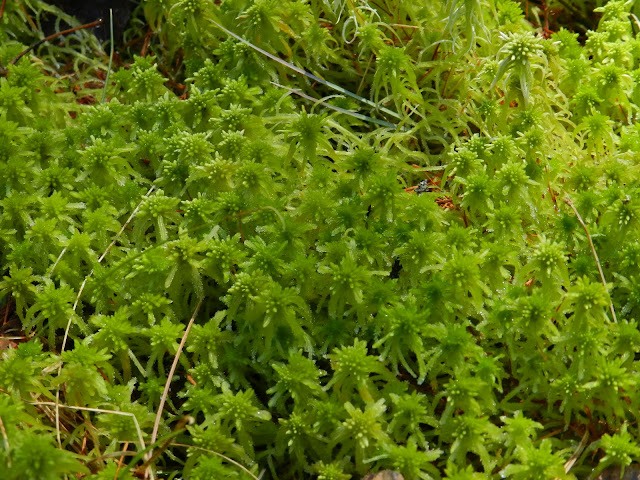 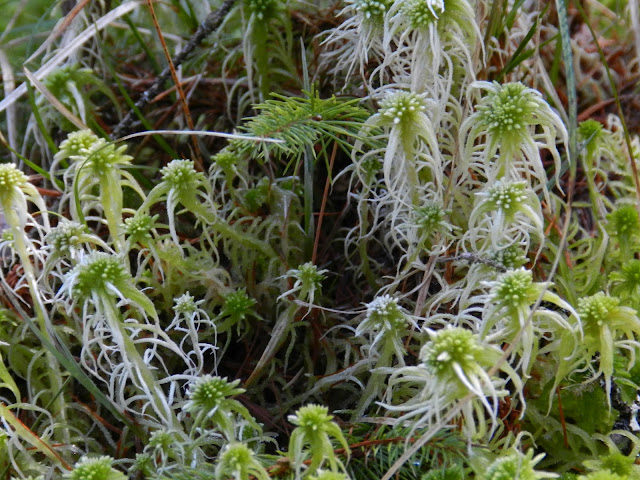 Another type of moss 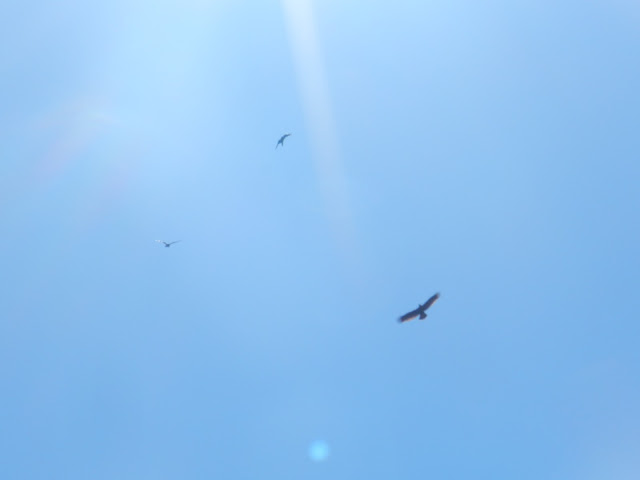 And my final picture, although not very good, is a picture of a juvenile Bald Eagle, a Raven, and an American Crow duking it out on the thermals. They were very high up and moving quickly, AND they were almost directly in front of the sun...all making for a difficult shot. I wanted to include it because it was a neat sighting for me, and especially others who've never experienced an Eagle or Raven.


It was a beautiful weekend with awesome friends, professors, food, weather, and laughs. A great memory of my time at FLCC!

Blog entries coming soon: follow up camera trap pics from East Hill Campus, the end of my independent study, and a bobcat dissection!