Several weeks ago I wrote a blog entitled: What Shat That Scat? (pretty hilarious IMHO!)...and I've not yet had the chance to show the results of the 9 Cuddeback cameras we hung out!

Briefly, we had a group of Wildlife Society student members, and our trusty professor and wildlife buddy: John Van Niel to lead the field trip to our college's newly acquired field station, the East Hill Campus. The cameras were running for 2 weeks. 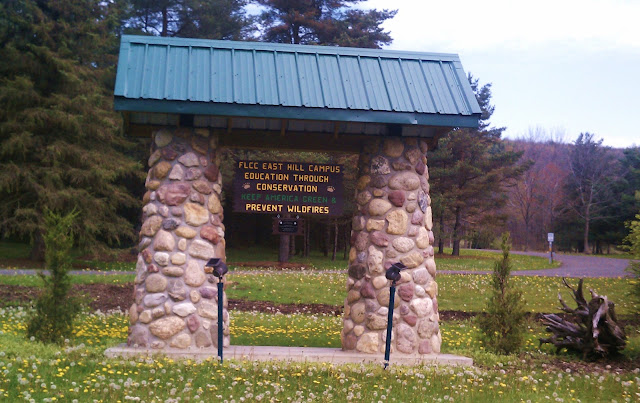 It's a gorgeous campus, and we're lucky to have the generosity of the man who donated the property! I don't have much to say this time, so I'll just let the pictures speak for themselves :) 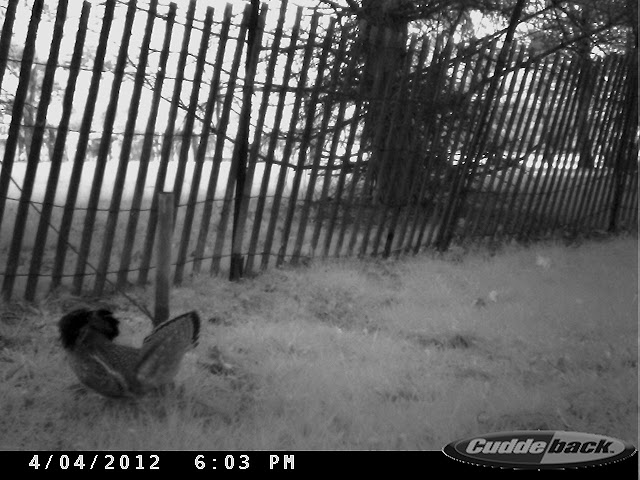 A new species for me! Can you tell what it is? 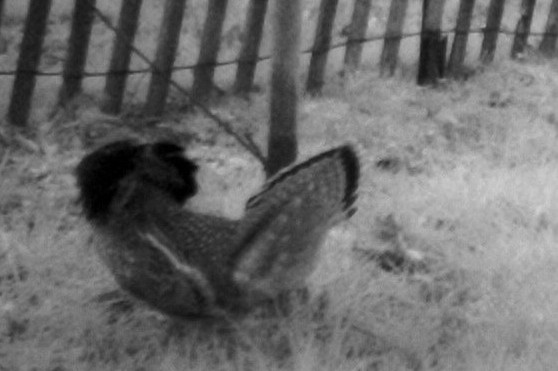 A Ruffed Grouse doing his thang! Perhaps there was a lady Grouse on the other side of the snow fence...? 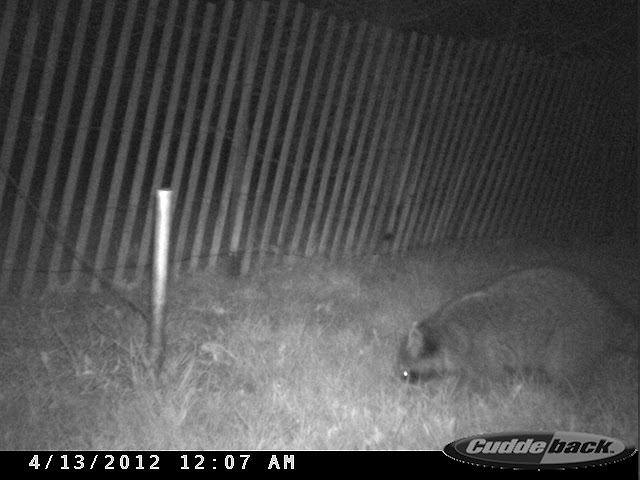 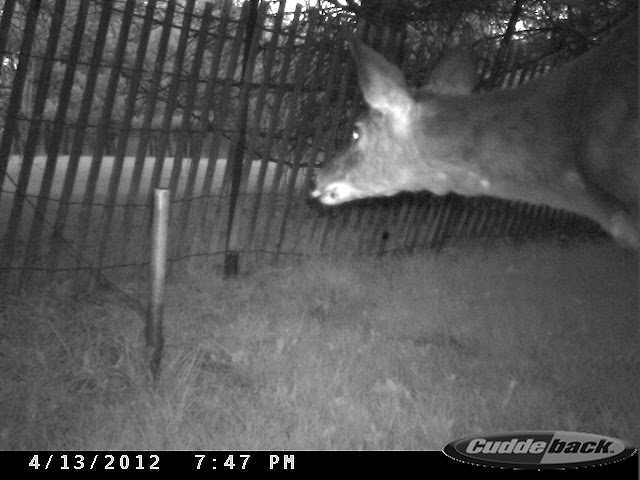 White-tailed deer. We poured a little "Toxi-Dog" scent down that pipe there to lure someone in, and as usual, it was the WTD!
Camera #2 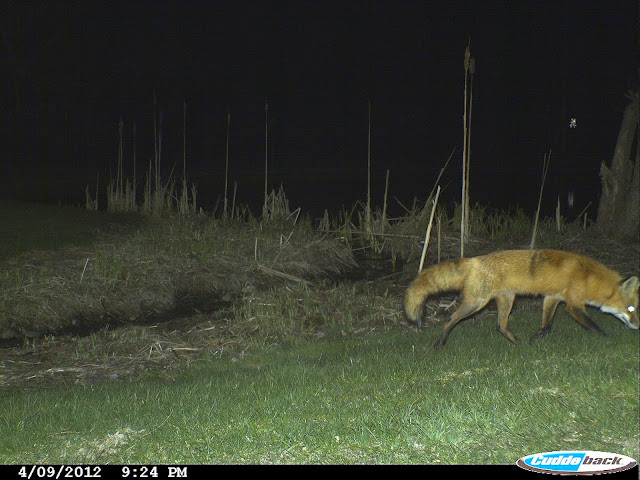 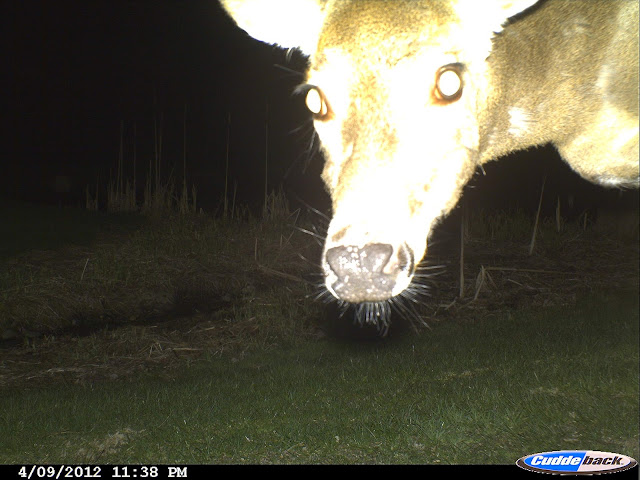 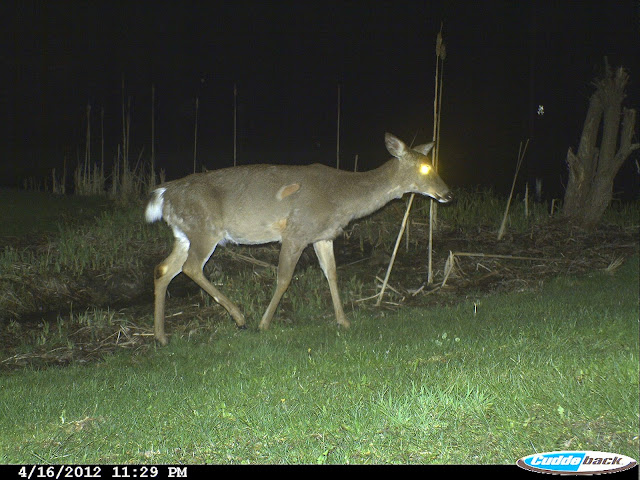 That's a nice patch of fur off her shoulder, I wonder what happened? 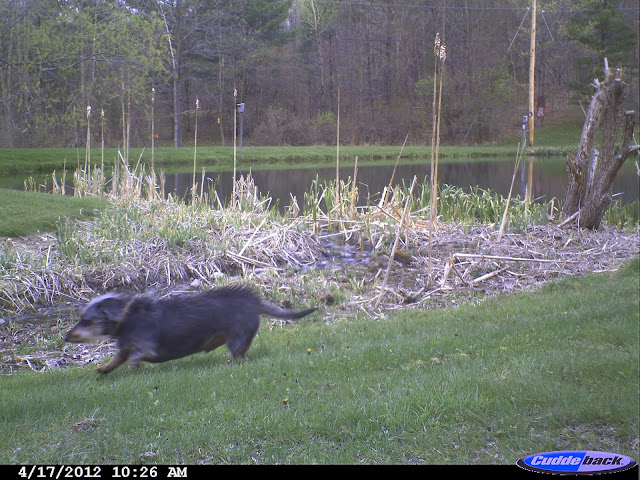 And Nicki, the homeowners pet dog! 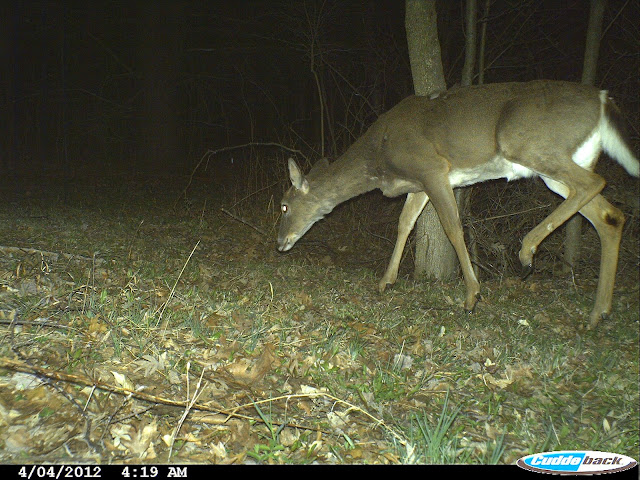 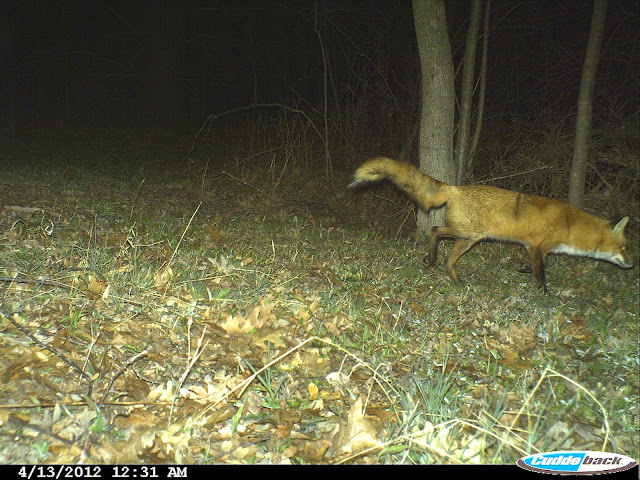 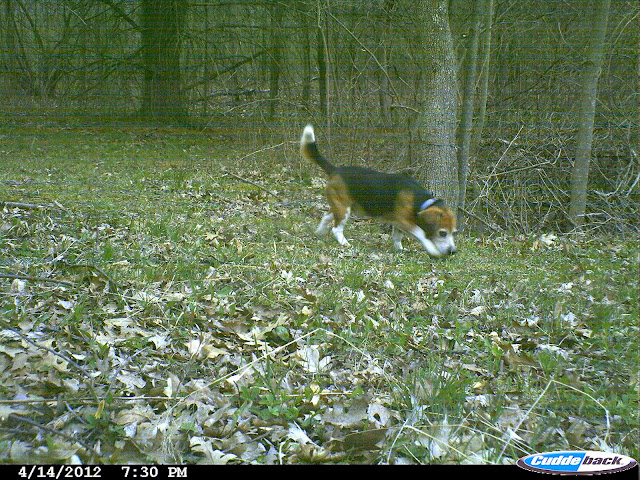 Cooper! The neighbor's pooch.... a common occurrence on cameras I've put out over the past couple of years here!
Camera #4 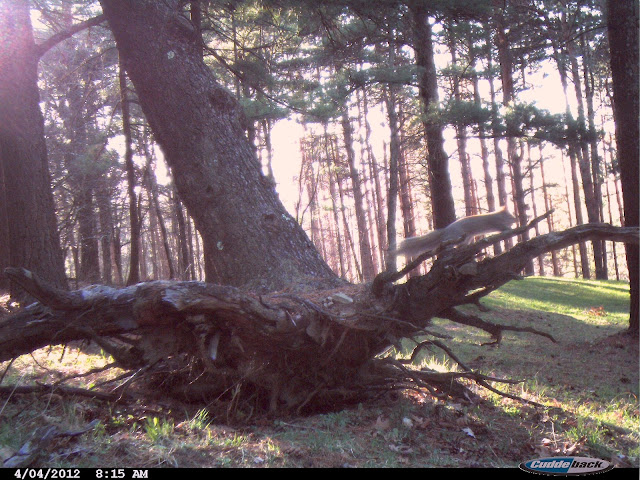 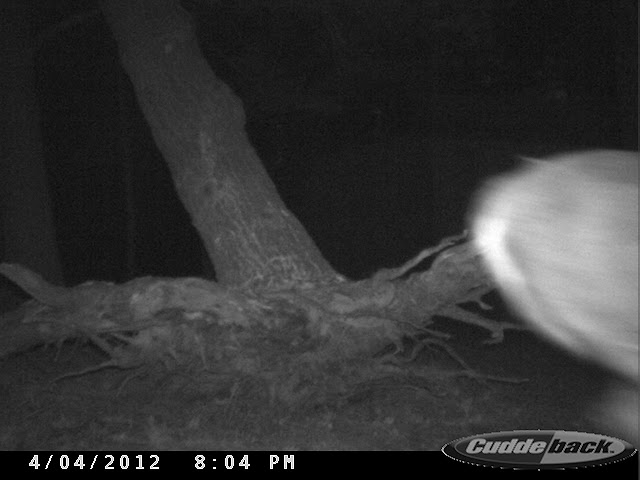 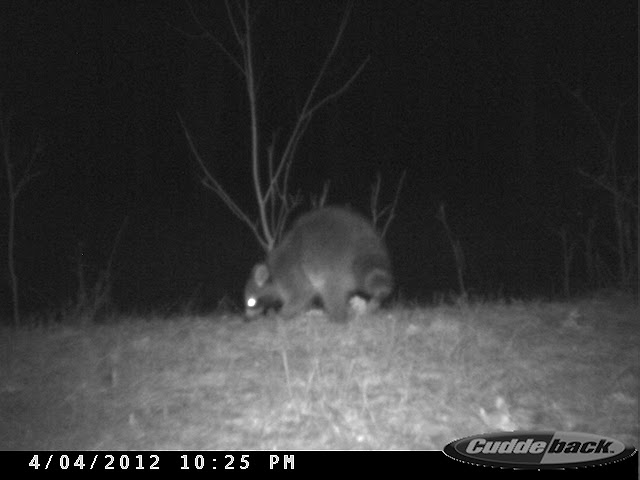 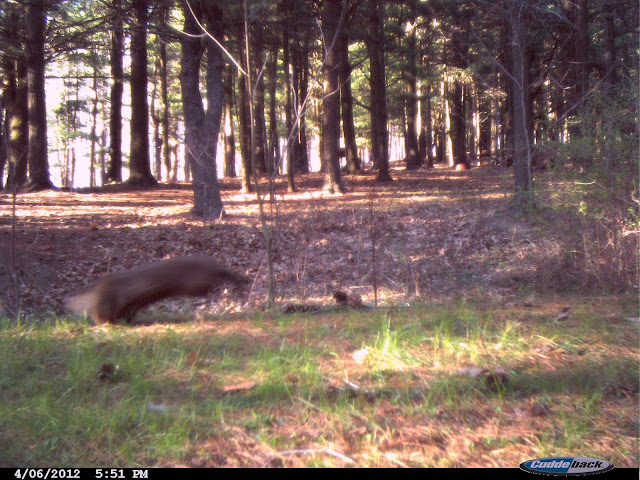 What could this be?! When we first found this site, we set a camera because we found several coils of weasel scat. Some people thought that this was a mink, but it's too thick and not the right habitat, although there is some water here. Just past the critter, there's a small pool of water that usually hangs around all year, but this year might just be vernal... 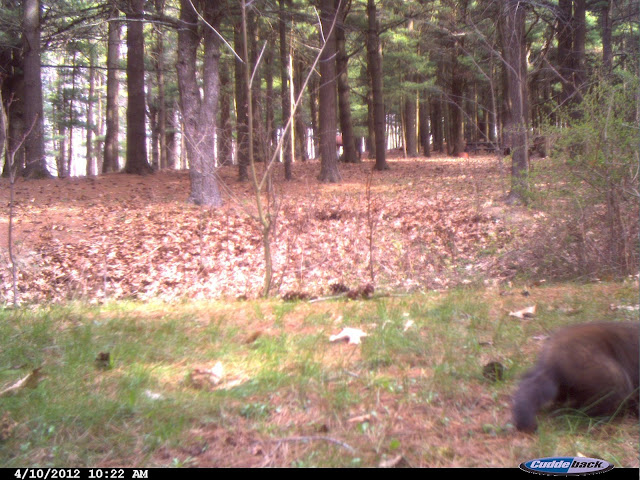 Well, there's the next best pic we got of our friend... 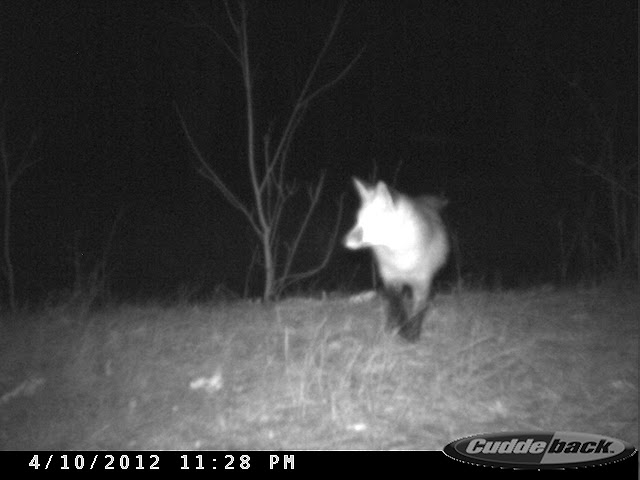 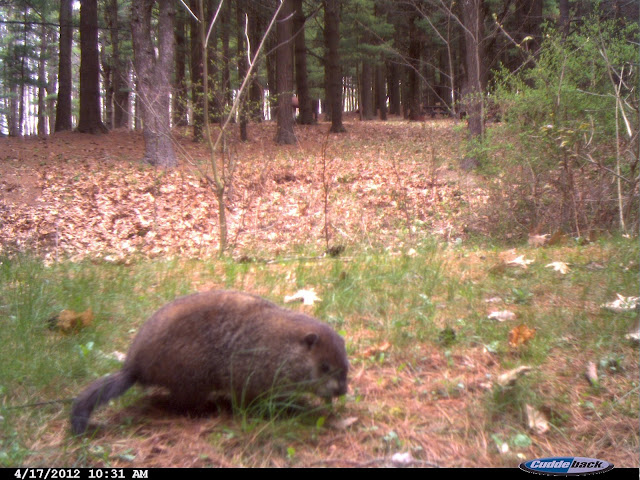 And there, finally a great picture of a majestic animal: Marmota monax....or the woodchuck! 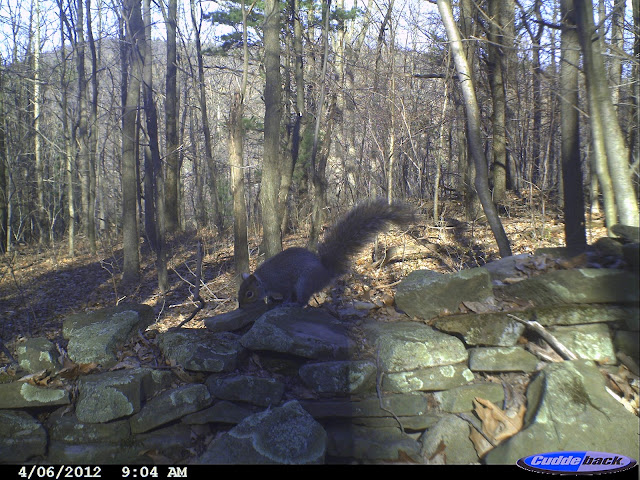 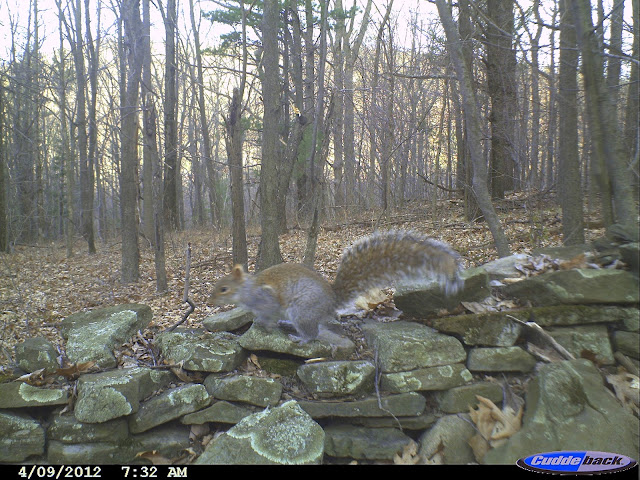 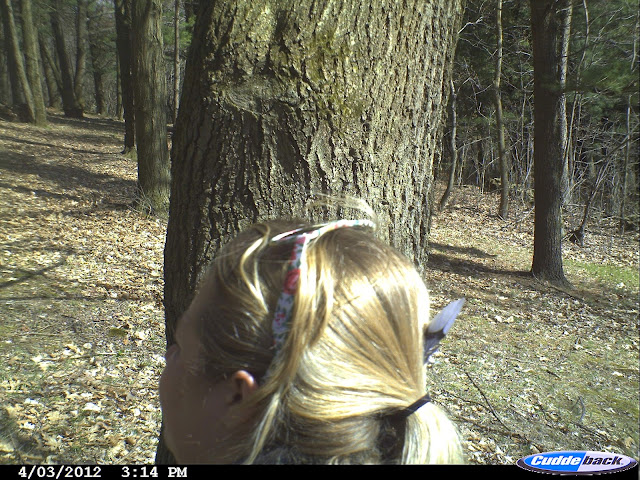 Haha, the only picture this camera took was of me standing in front of it while it was being hung :) That tree there has a flying squirrel box mounted on it about 10 feet above my head, which has been inhabited by flying squirrels in the recent past. We were hoping for one of them crawling down at night....but nope! 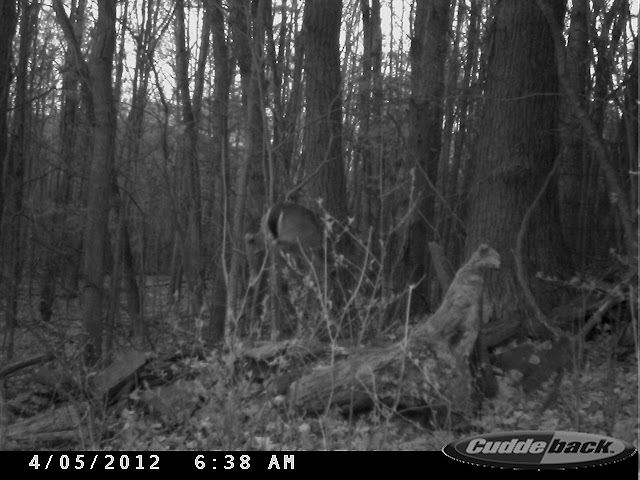 Can you pick out the WTD rear? 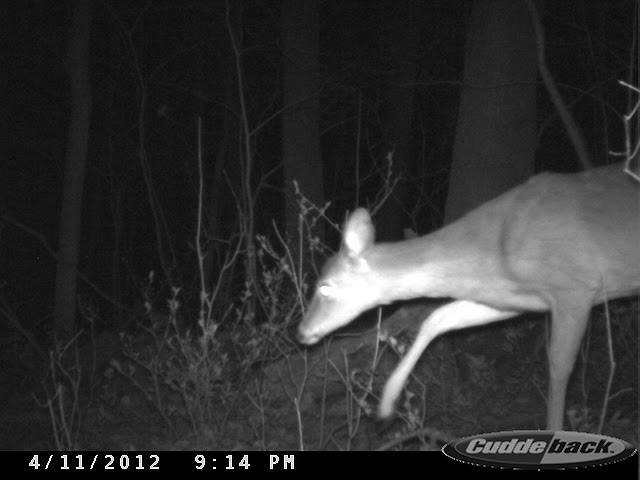 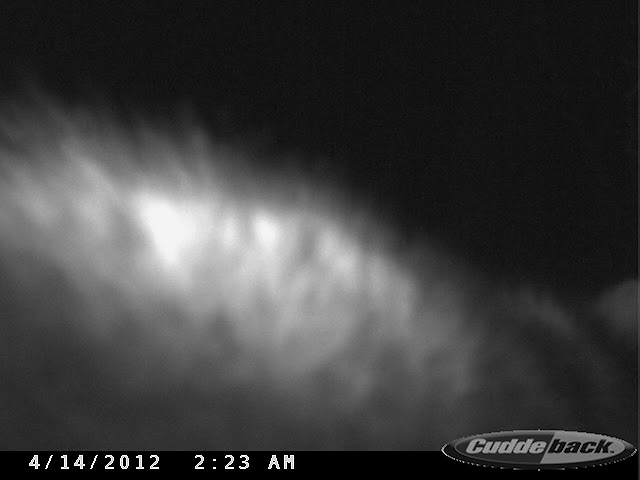 Those are the pics! We got some great variety, and some personal firsts on camera for me (Grouse and woodchuck). John (Backyard Beasts) was going to write about our results as well, but he let me take the pics and write. He's super swamped with grading and teaching (and I should be swamped with writing and learning...), so, here they are!
Written by: Alyssa Johnson at 5/02/2012 06:15:00 PM Labels: camera trap, Cuddeback Attack, Cuddeback Capture, Domestic dog, East Hill Campus, Gray squirrel, John Van Niel, Raccoon, Red Fox, Ruffed Grouse, White-tailed deer, Wildlife Society, Wildlife Wednesday, Woodchuck