What Shat That Scat?

Yesterday our Wildlife Society Club visited one (we have two!) of our field stations, the East Hill Campus in Naples, NY. The point of the trip was to allow students to learn how to use camera traps, specifically the Cuddeback Captures, both IR and incandescent. We dragged along our local camera-trap expert, Dr. JVN. 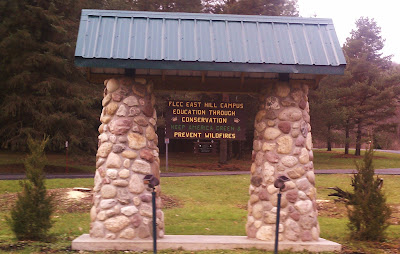 We had a gorgeous day, there was a slight threat of rain, but it held off! I love this place, I really do. It came into official possession of the college's in the summer of 2010, right as I was coming into the fold at FLCC. The man who donated the land, facilities and assets is with us still, and I've been able to forge a nice relationship with him. He is truly and "old school" conservationist who has lived through the hard times of war, economics, politics, and ecological "stuff". I guess I can say that I am living those hardships as well, but he's of the era that we're learning about now in the classroom.

This property is the perfect representation of land that can be managed and used for multi-purposes...blissfully. He's owned the land for 25 years and shortly after buying it, he constructed hiking and cross country skiing trails, a campground with an A-frame, lean-to, fire pits, and newly added: an outdoor classroom as of last summer! There is a pine plantation, grassy fields, ponds, and all of it is ours :) Oh, did I mention that it's OPEN to the public? Year round? For FREE? His trails can connect you with the Finger Lakes Trail system, and eventually to the Appalachian Trail. So, Mr. Fraley- thank you for the outdoor classroom, generosity, and the laughs (at my expense)!


Now, back to our fun yesterday afternoon!

We had 9 cameras to set out, 7 students, and John...so I got to pick two spots :) I've been so focused on being precise and neat and tidy with setting my cameras lately, since I've been conducting a mini independent study with them, so it was really fun to pick camera sites that "looked good" and set the scent willy-nilly flinging it everywhere or shoving in a hole in the ground. 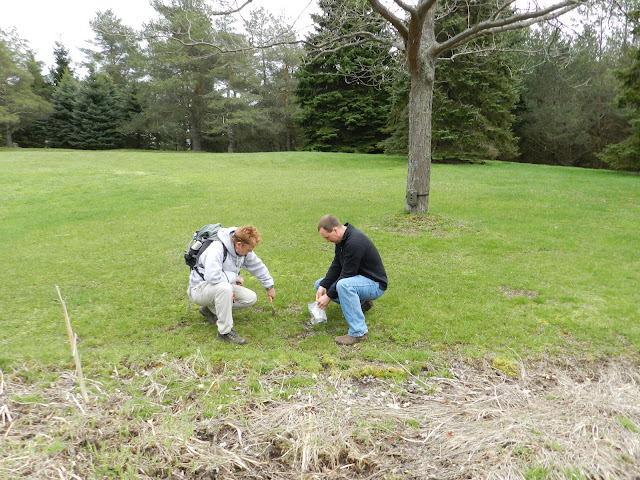 Judi and Adam set a camera in the background, and are now digging a little "cat hole" to stick the scent in. I took the New York State Trapper Education course this weekend, and am now certified to live trap, if I get my license. I took the course to learn about how trappers draw the animals in to their sets, because I'm pretty much doing the same with my cameras. So it was suggested to dig a hole and put the scent or bait in there to make the animal work a bit more for it. In their case, they want the animal to dance around and step in the trap. In my case, I want their cute little picture :) !!! 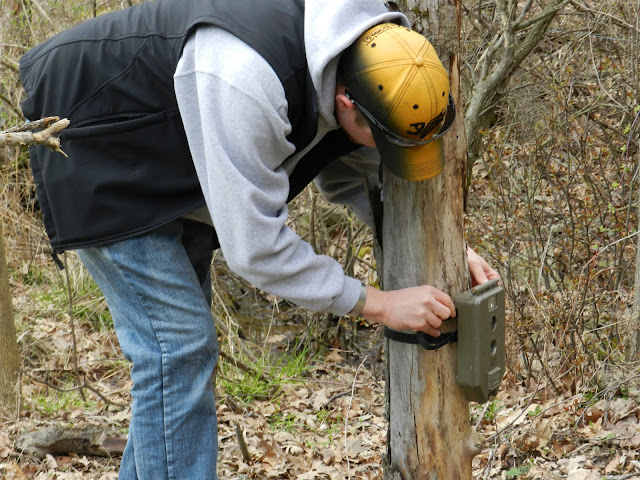 Next Dana and John chose this spot because it's a cross of trails. There's a trail coming in from the woods opening out to the mowed lawn we were standing on, so we thought it was a nice travel corridor to set a camera on. 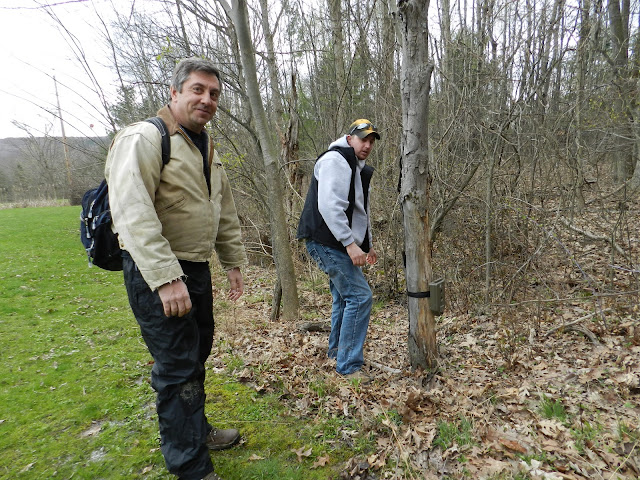 John and Dana checking out the site :) 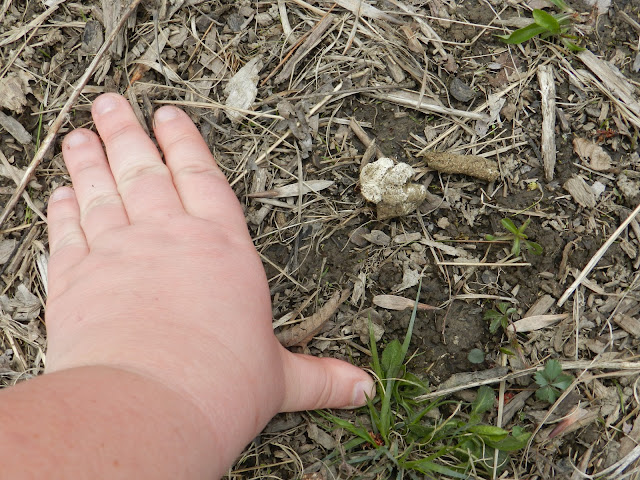 And here is where I got this entry's hilarious title. I found so many good scats that day! This happens to have been left by a Wild Turkey. I narrowed it down to Ruffed Grouse or Turkey...and was learned on the differences between them. Basically- this is a bit too big for RG. 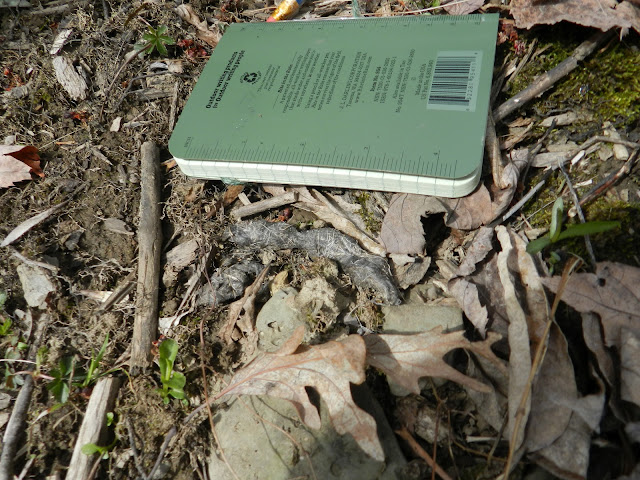 Next on the list...who shat that? This is from one of our beloved foxes. Immediately I say red fox because that's who I have the most experience with. Until several weeks ago, I'd never seen one, and THAT was in North Carolina (the gray literally walked up to me as I was setting the camera). But, I asked, and John confirmed that YES there's probably an overlap in: size of scat, composition, habitat and so it could belong to a gray, but more likely a red. 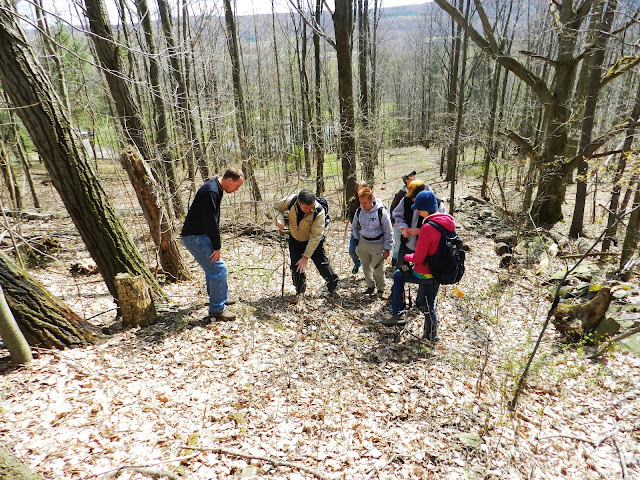 On our way up the hill, we found a den or burrow that looked fresh-ish. There wasn't any fresh soil disturbed, but it wasn't completely closed in and plugged up with dead leaves and debris either. John's on this woodchuck kick right now (Woodchuck Love) so he was eager to set a camera on the entrance. 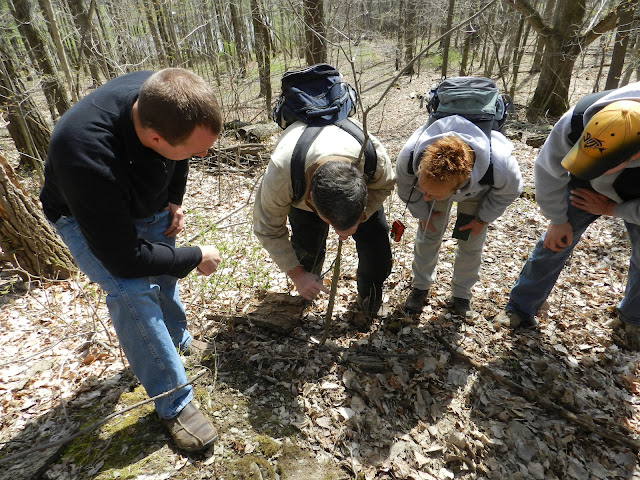 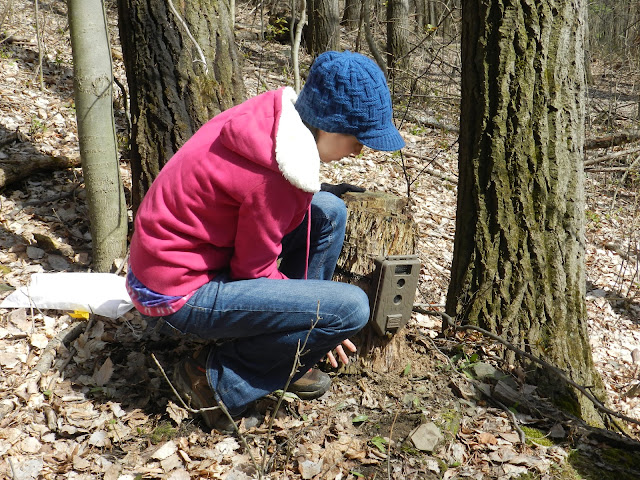 Kara setting an IR camera on a chunk of wood close to the entrance. I can't remember if we scented this site or not, but I think not. We wanted to see 'au naturel' activity here..if any. 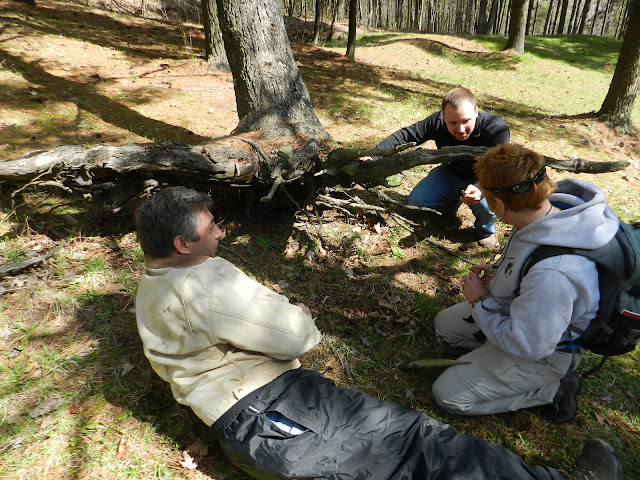 Further up the hill we found this cool pine tree that was clinging to the top soil with all the strength it had. Again, all of us looking for a "cool" spot, were drawn to this little hidey-hole that some animal may live in, or at least come in to check out. So, Tyler set a camera. 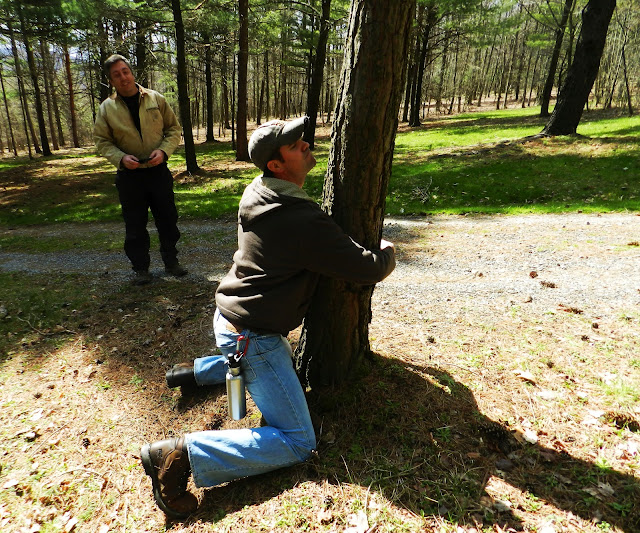 Tree hugger gone too far? I think he's trying to grab the strap from around the tree, while holding the camera in place... 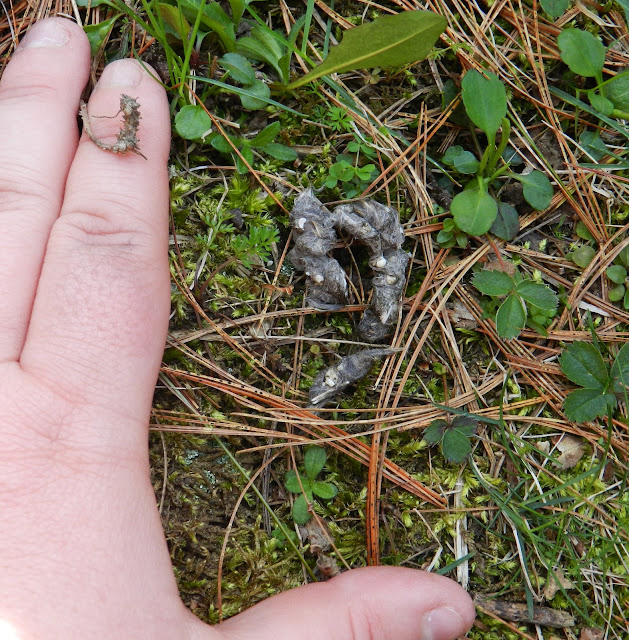 Now THIS scat...this is special scat. We, on good faith, know this belonged to a Mustelid, or loosely: a weasel. The tell-tale shape, twistiness, and composition of hair and little bones screamed weasel to us. When I say weasel, I kind of refer generally to all of those that are from the weasel family in NY. In this area and habitat, we could have: fisher (rare), mink, long-tail, short-tail, and the least (rare). We also have river otter and marten in NY, but not in this region or habitat. So, John thought that this was perhaps a little too small for mink, so maybe I filled in, a long-tailed weasel. Again, with the foxes, there's so much overlap. It's hard to tell. 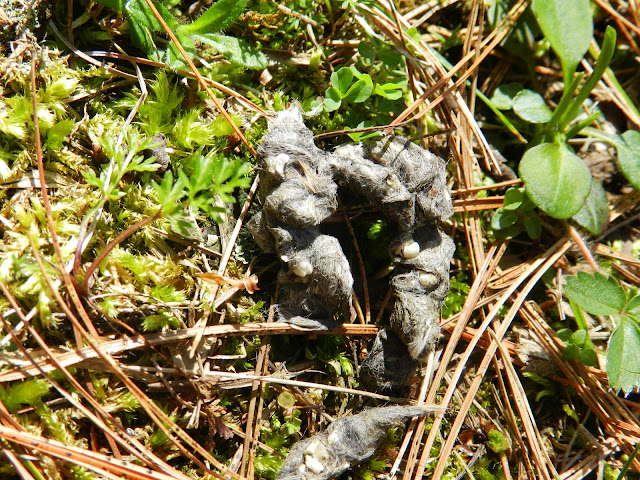 Same scat again. To describe the habitat, we were in a pine plantation, and this scat (and the one below) was specifically on the berm of a small fire pond. Well, this year I guess we should call it a vernal pool- it was SO low and it's only the beginning of April! 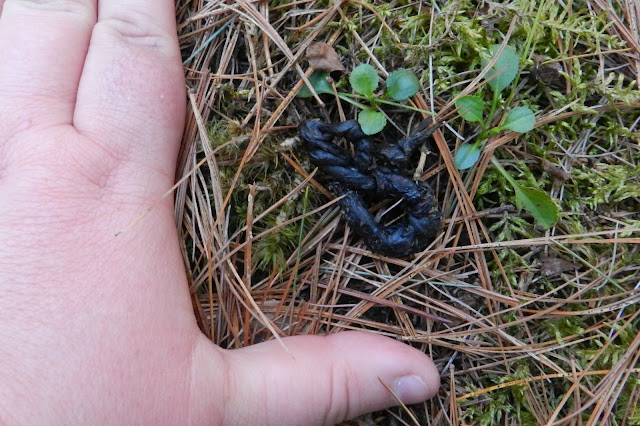 A different scat, but perhaps a little more fresh. It was small, twisty...weasel-y. 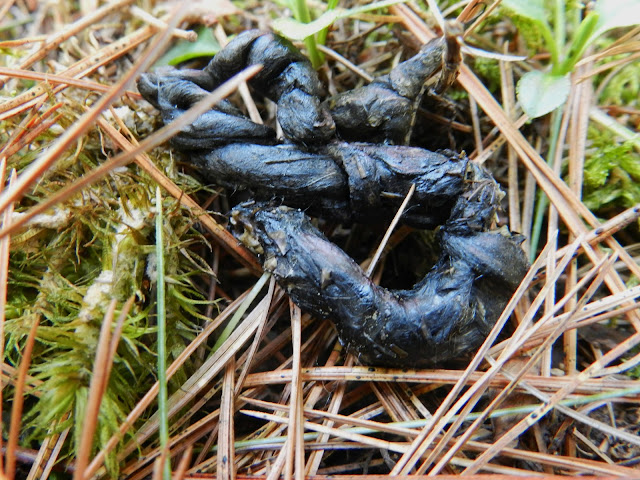 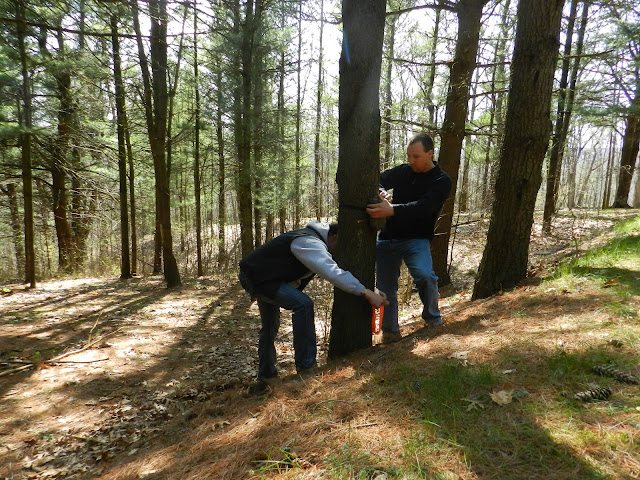 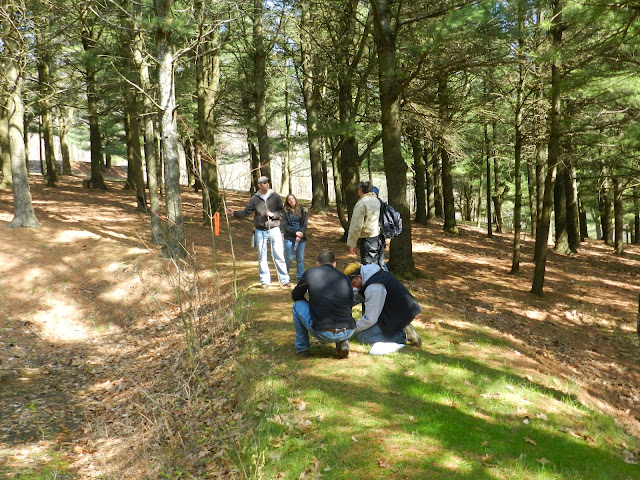 I'm standing on the berm, the pond to my left. Usually that pond is up to the lip of the berm. Not so much this spring...poor salamanders and frogs! 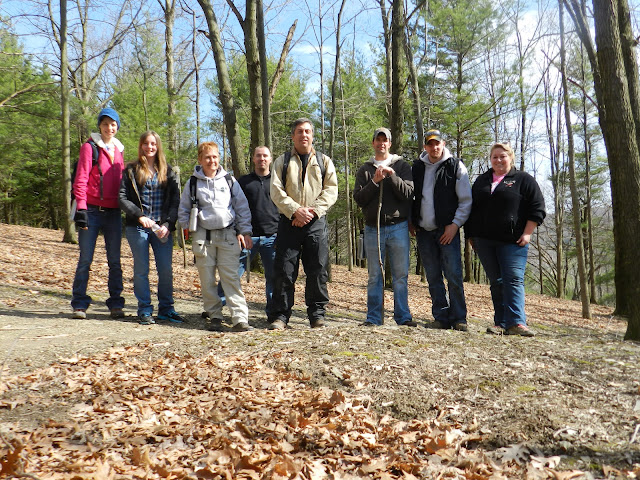 I convinced everyone to stop for a minute so I could set up and get a picture. That's the past yearbook editor and future mom in me. I like to include everyone! Especially now that I'm blogging! 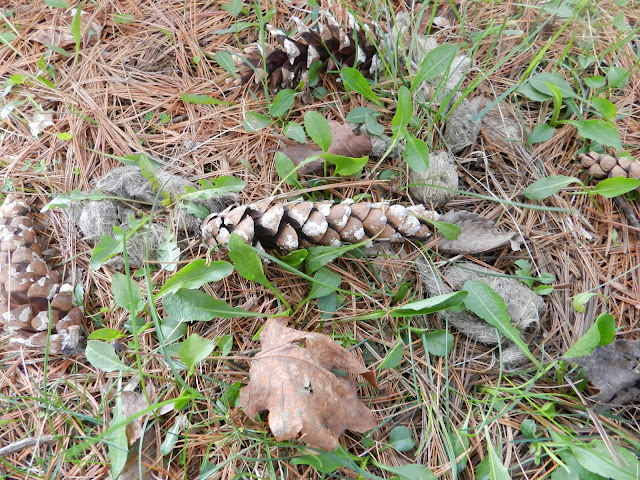 On our way back down the hill, a final shat of the day. This is a beautiful coyote scat! Sorry for the lack of scale, but the pine cones are 4"-6" long. 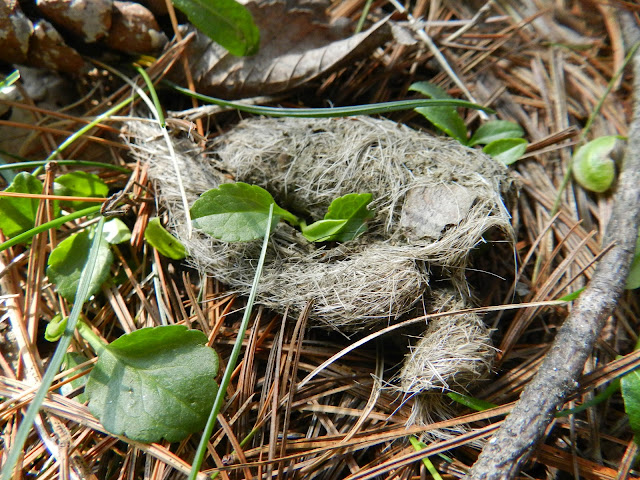 It was just full of hair, and John explained to us that usually when you find a scat full of hair, it can mean that the animal was just picking a carcass clean. First choice at a fresh kill would be the meaty parts, but later in the season, or a late comer to the party is left with the hairy, boney parts. And that's what I found while pulling this apart- lots of hair and bone fragments.
I LOVE learning about scat, it's almost as cool as the remote cameras to me. Like the cameras, I don't have to 'be there' to learn all this information about the animal. I can come across it later and either look at the pictures, or examine the scat to get an understanding of foods, behaviors, habitats, etc etc etc. And scat is often NOT smelly (although I've heard raccoon scat should be handled with care), and not really gross. Just a lot of cellulose or keratin that the animal can't digest.
Anyway, we'll be letting our cameras soak for two weeks, and then hopefully I'll have all kinds of majestic creatures to share!
Written by: Alyssa Johnson at 4/04/2012 09:22:00 PM Labels: Coyote, Cuddeback Capture, East Hill Campus, Long-tailed weasel, Naples NY, Red Fox, scat, Short-tailed weasel, Wild Turkey, Wildlife Society