Hey folks! I'm back from the world of a non-working power cord and a dead battery :) Also, my life has finally stabilized for a few months.

Last week I participated in FLCC's week-long course called Conservation Field Camp. This is a class that all students going through the Natural Resources Conservation, Conservation Law, and I think Fisheries Technology programs must participate it. I was a student in it last summer, and this spring I applied to be a student technician this time around. I was hired to be a "wildlife tech" under conservation professor John Van Niel (wildlife expert), and biology professor (cell bio expert) Clinton Krager. My friend/future roommate, Mady, was also a wildlife tech.

The four of us were in charge of exposing students to camera trapping, small mammal trapping, bat mist-netting, track identification, using track boards, and GPS/telemetry.

There is SO much I could write about, and I have a ton of pictures...but I don't have the time to write about it all. We caught flying squirrels, red squirrels, chipmunks, deer mice, and jumping mice in the traps, and I have some awesome pics of critters in the hand. And I hope that John at Backyard Beasts posts some of the camera trap pics we caught. Some AMAZING first "traps" for me personally, but he has all the pictures :)

What I'M going to write about is the bat mist-netting. This was a first time experience for me personally, so I was super excited to see what we caught. Because bats are nocturnal, we couldn't set the nets 'til about 8:30-9pm. The students were technically done with class at 9:30, and the days were long...so by the time bats came out, many were ready to head to bed.

So, on Monday night: John and I set the nets while Clinton gave a brief lecture on what bats live in our area, some natural history, winter adaptations, and some information on bat-related diseases.

Before I continue, I must add that John and Clinton both received intensive training in mist-netting and handling bats. It's not something that anyone can just do for fun. They also both received the full round of rabies vaccinations as a precaution, and then on top of that, they wear leather gloves covered by vinyl gloves that get swapped out between each bat.

Tuesday night, we has a new group of students, and so Clinton went through his schpeel again, while John and I set nets up. I think Mady was napping... :) 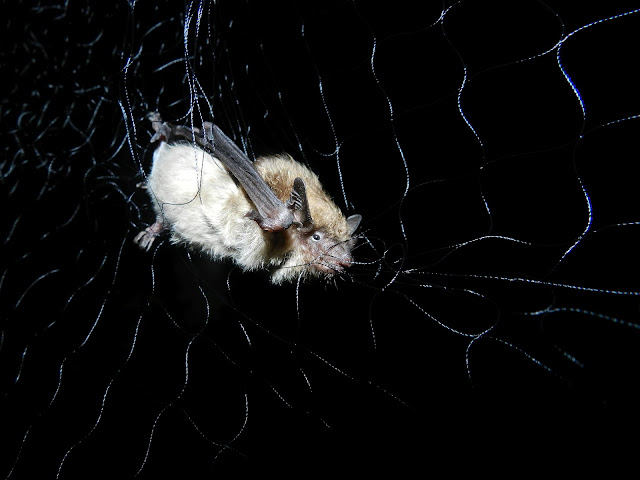 A BAT!
I'm unsure of species...the 4 of us meant to look at the pics I took and try to ID this little guy, but that didn't happen. The guesses were a big brown bat (Eptesicus fuscus) based on Clinton and John's previous experience handling bats. This little guy was pretty vicious, which you could expect from any wild animal, but some have more attitude than others. 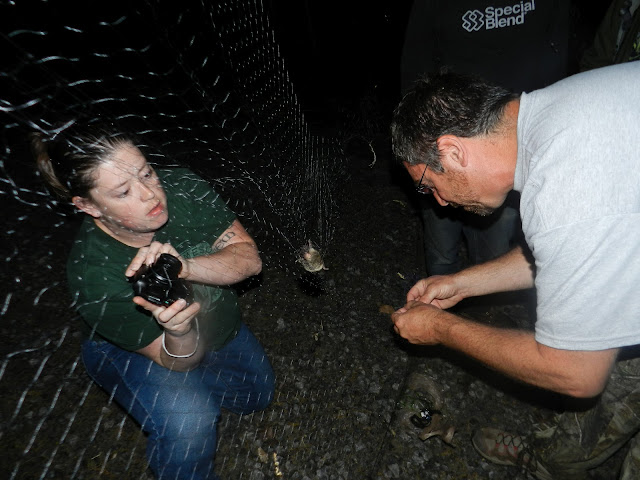 Student Melissa Miller and John checking out which side of the net the bat is on. Sometimes it's hard to tell because they get themselves so tangled! 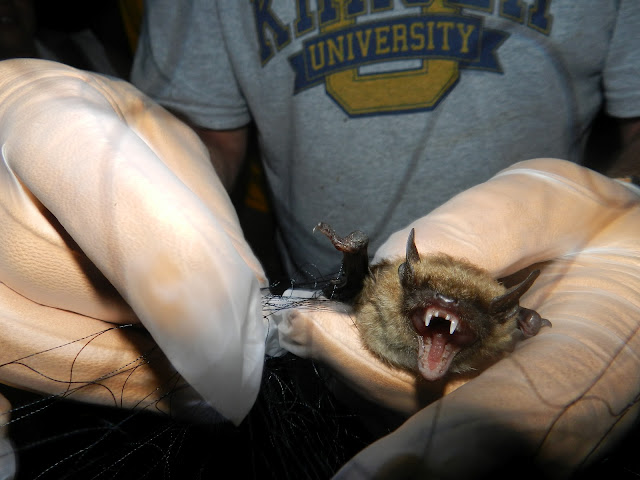 Check out the dentition on this guy! In our Intro to Fish and Wildlife class that John teaches us to ID skulls from black bear through the canids, rodents, lagomorphs, and the bats, amongst many others. The chiropteras have this gap in their jaw, which you can see here between their canines. It's cool to finally see in "live" after studying just skulls for so long. 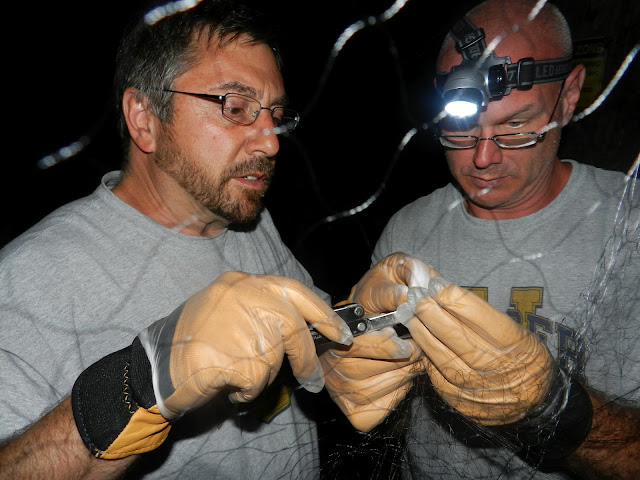 John assisting Clinton remove the bat from the net. Sometimes, as bird banders can attest, you just can't get the bird/bat out of the net. As any hands-on studying requires some amount of stress, we the researchers should have the animals welfar first in mind. Clinton probably could have gotten that bat out eventually, but not without loads of stress on this little guy. So John took a small pocket knife and carefully snipped the constricting lines. 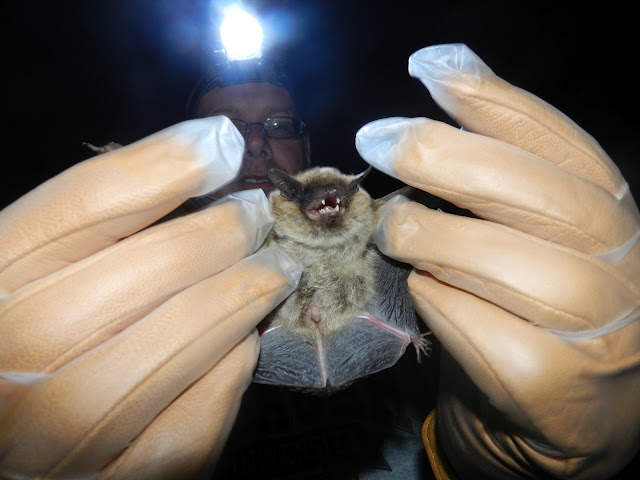 FREEDOM! I love this picture :) 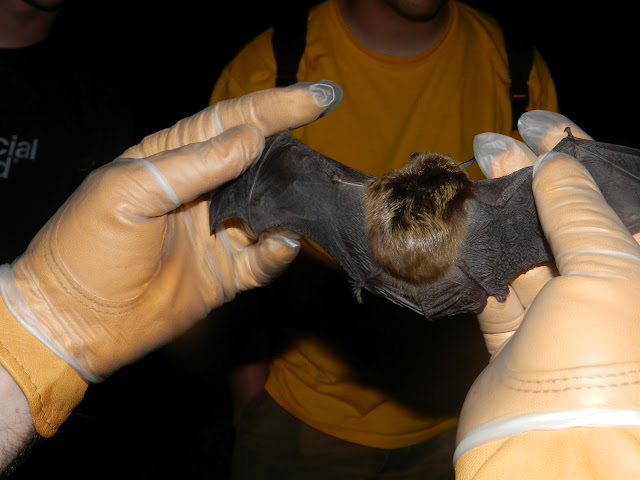 They're surprisingly furry!
I kind of wanted to touch it, but I couldn't because I'm not vaccinated for rabies.

The rest of the week yielded no bats. For those of us who were there Tuesday night, we got to witness a very cool thing. Even though bats are a common critter in NY, we don't often get to see them up close. We didn't have a high success rate of captures, but I hope that John and Clinton know that it was totally worth the time and effort to set those nets every night.

PS: I'm in ALASKA! I will be writing an entry soon on my first day here before I started work!