So, I'm here in Alaska on the Kenai Peninsula! I arrived here last Sunday night after a LONG day of traveling and adjustments to time changes. I think 6 days later I'm finally adjusted to the difference in time, though not to the long days of light. 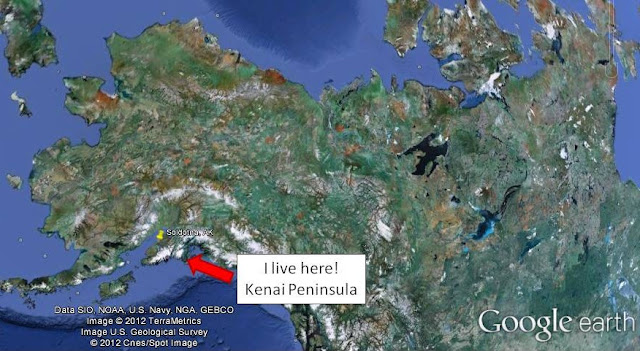 So to catch people up, I live on the Kenai National Wildlife Refuge (KNWR) in this gorgeous cabin: 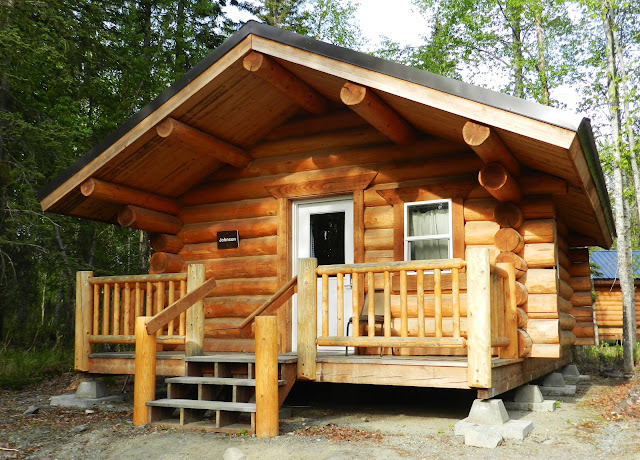 This one and I coincidentally share the same name, which is funny to me! There are 5 of these cabins, each house 4, and then there's a common building with kitchen setups, washers/dryers, and bathrooms with showers.

I have seen some intern housing on another wildlife refuge that I visited earlier this spring and it did NOT look like this! I really lucked out with the summer housing!

I currently have just one roommate, Mercedes, who is a wildlife students from Georgia U I think, and she's working on the refuge this summer.

I'm considered a "fish person" here, which is just too funny to me. I know the bare minimum about fish ID and natural history, but I'm one of the fisheries team this summer. There are 6 seasonal staff, of which I am one, and all the rest are men. All of us are similar in age, probably mid 20s to early 30s. The permanent staff out of the Kenai Fish and Wildlife Field Office are men as well. There are some women on staff, but I won't have much interaction with them.

Anyway, back to housing- the 5 guys will be heading out to remote field camps coming up here soon. And I will remain in this town (Soldotna, AK) for the summer working out of the office. The other people who live on this camp where I am now work for the refuge, so I'll still be with people when the guys leave!

I have ALOT to write about so I'm going to break them up into a couple of entries. This first Alaskan entry will be dedicated to the adventure I had on Memorial Day, my first day in AK!

I travelled all day last Sunday (5/27), arriving here around 4pm, really 8pm EST. I had to meet everyone, and get settled in, and also had to go grocery shopping, which I didn't finish until around 8pm here...12am at home. I was dead tired, and despite the broad daylight, I crawled into my bunk bed and passed out for 12 hours.

The next morning I was up around 8, and outside my cabin on the phone with a friend from home, when one of the guys that I work with stopped and asked me what my plans were for the day, and of course I had none. He invited me to join a couple of them on a tour of the Kenai Fjords by boat! It was super nice of him to invite me, and I jumped at the chance to travel with my coworkers and to see Alaska that you see on postcards!

We drove 2 hours across the peninsula from Soldotna to Seward...

And booked our 4.5 hour tour. With tax it came out to about $110 for the tour and a stop off at a remote resort for an all-you-can-eat buffet of prime rib and salmon! It was a chunk of change to spend my first day, but going on a boat tour was one of the things I really wanted to do here. And it was so worth it! 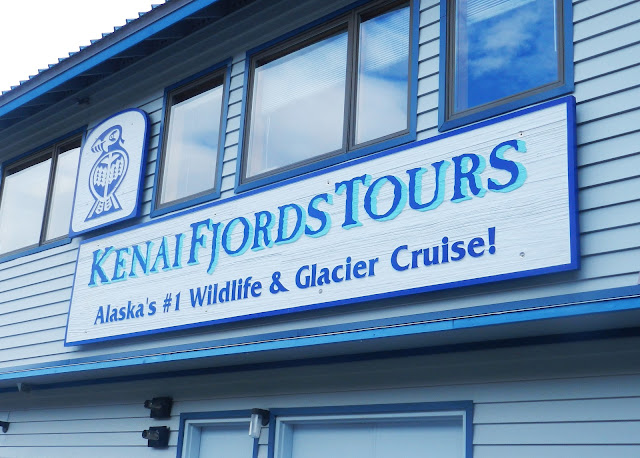 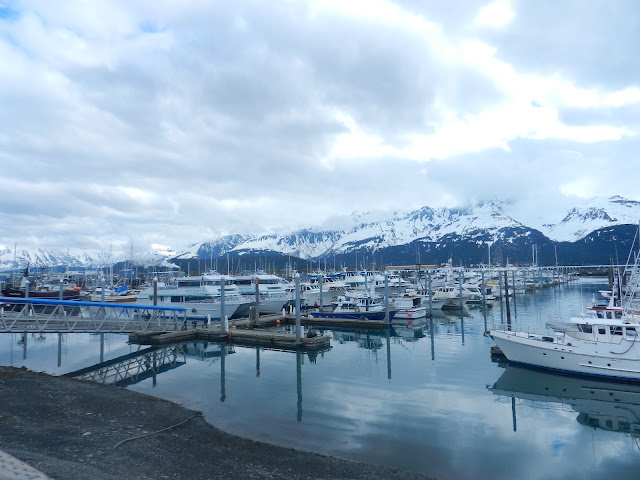 Seward, Alaska...stunning even in overcast skies!

I wasn't sure what to expect, except maybe whales. Here's my list of critters viewed that day:

The following images are what I was able to capture at a distance, rocking on the waves! 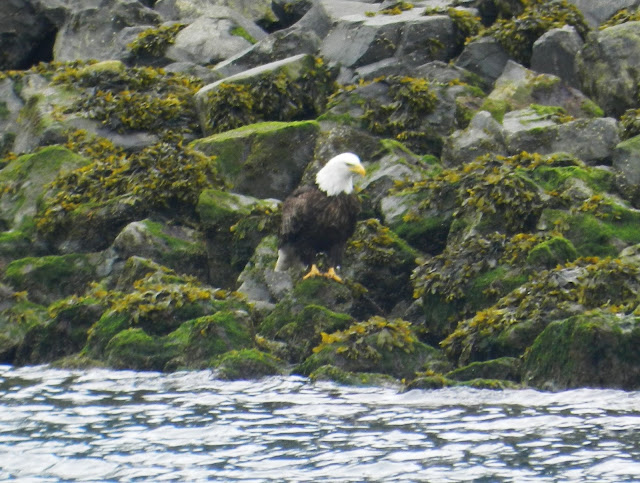 A Bald Eagle hunting on the banks of the marina. This picture was littery in the midst of hundreds of boats...amazing how common they are here! 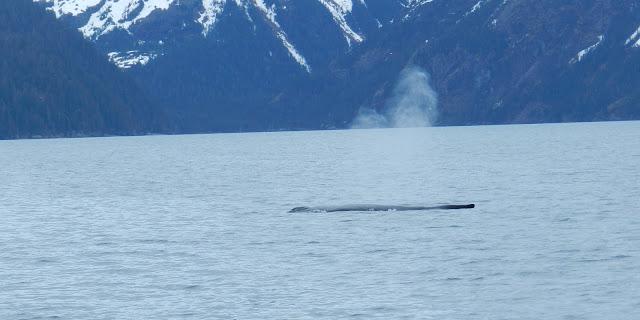 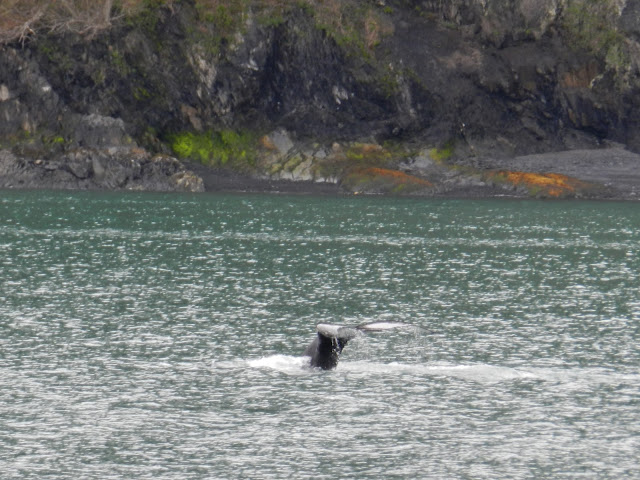 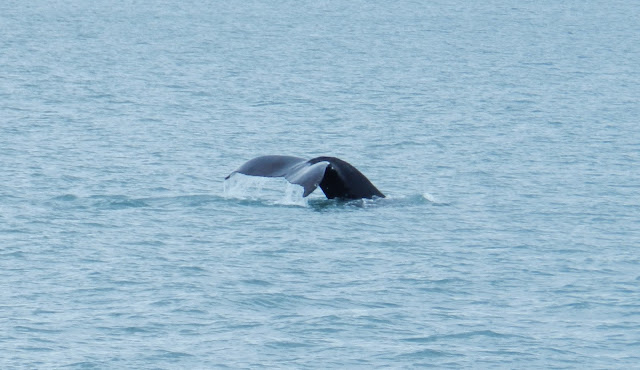 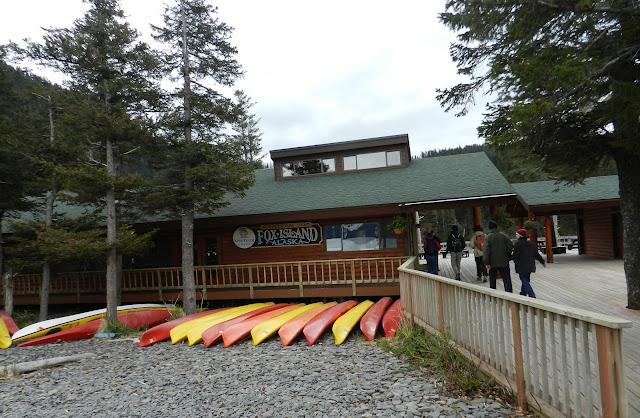 The resort we had lunch at on Fox Island. 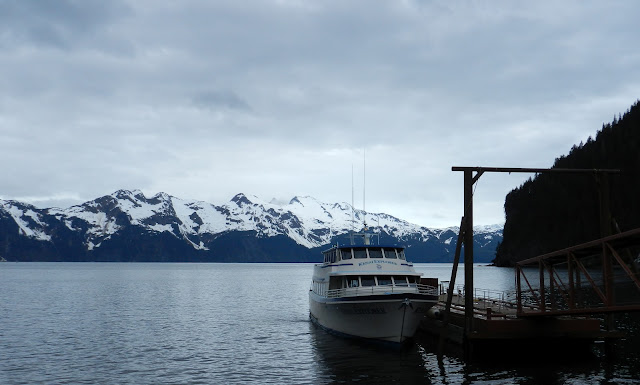 Our boat docked at Fox Island 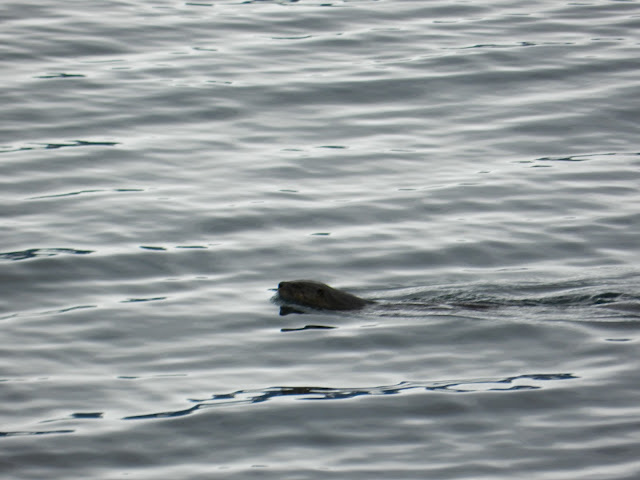 River otter right off the dock I was standing on 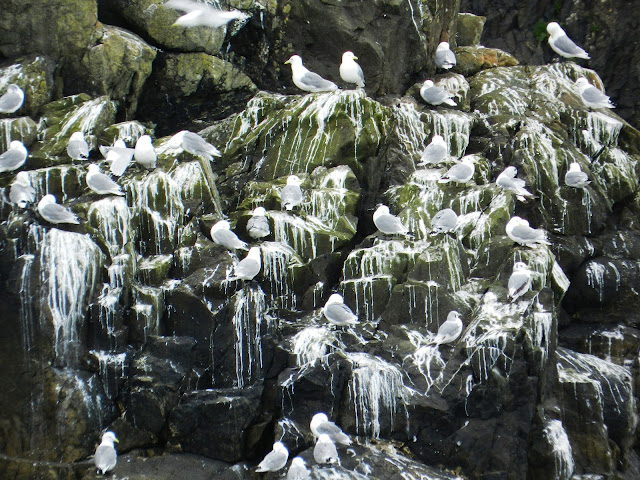 A Black-legged Kittiwake and Glaucous-winged Gull rookery...the largest on the Peninsula! The Captain/tour guide told us that if these birds could figure out a way to lay their eggs on the water they would...they barely even build nests...just hang out on these sheer cliffs. 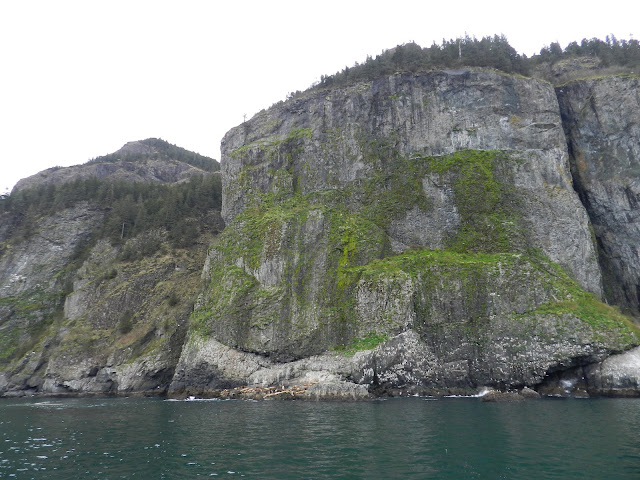 A pic of the Fjords and a group of very gregarious critters below... 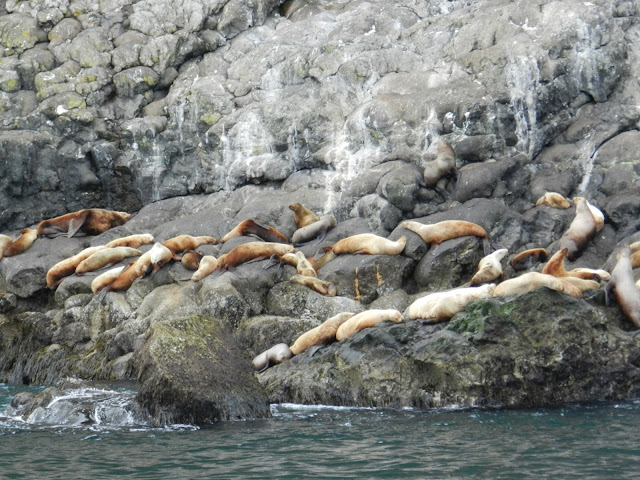 Steller sea lions! They were: loud, stinky, and laying everywhere! Occassionally one, the male (top left on his side) would sit up and yell at his wives, then lay back down... 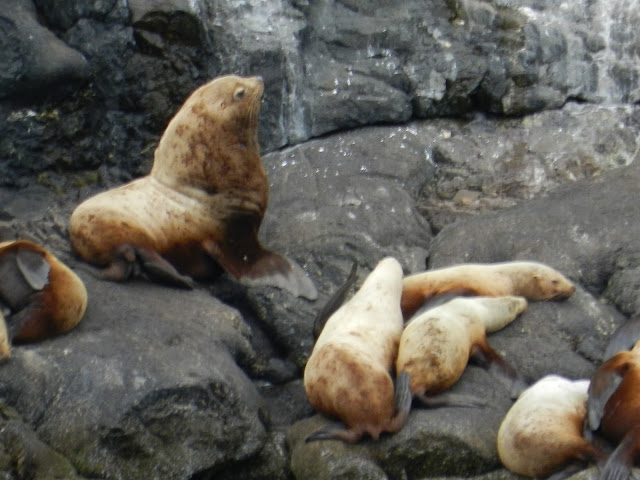 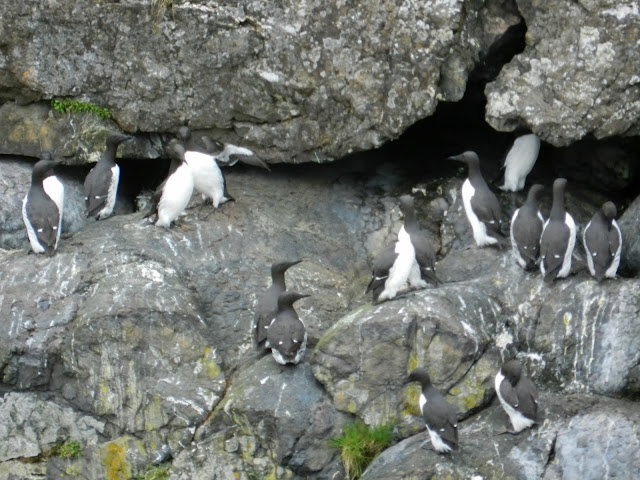 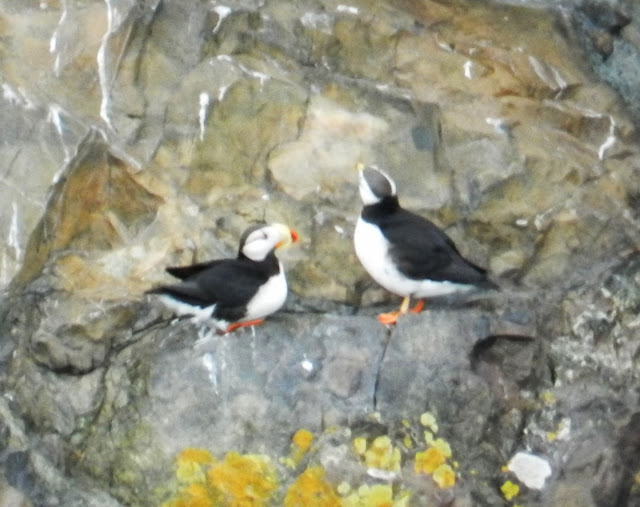 Tufted Puffins... I was told these were Crested Puffins by our Captain, but that's not a standard name for them. Thankfully a Bird Nerd emailed me and let me know that Tufted is the correct name :) 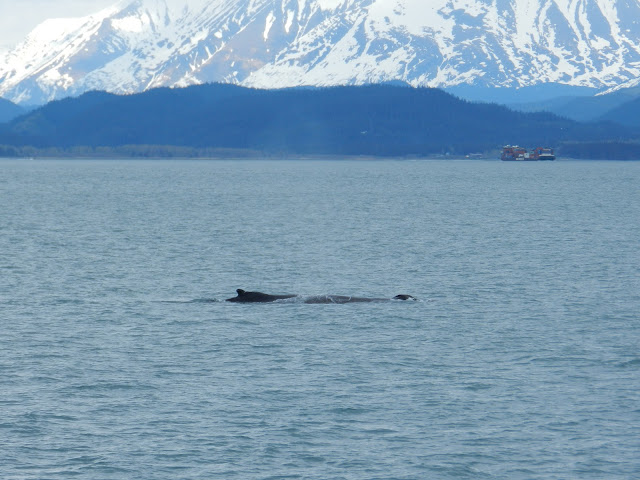 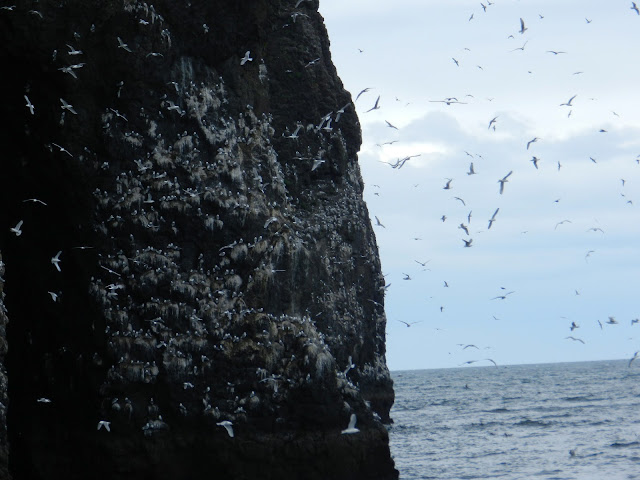 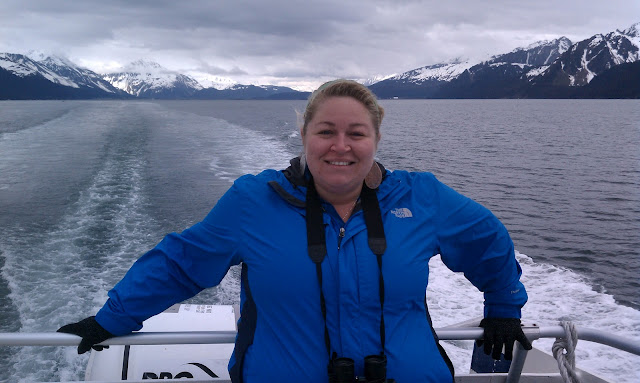 And finally, a picture of myself on the back of the boat on our way back to Seward! It was an AWESOME first day in AK, and I thank the guys for inviting me out :)


It's taken me literally 3.5 hours to write and upload all of this at a McDonald's in town and the obnoxious teenagers are annoying me...so I'm calling it a day blogging. If you're interested in keeping up with my summer adventures, either "follow" me if you're a GMail user or add your email above in the bar to get updates when I post. Then you can leave comments and ask questions on the posts. Til next time!