In this entry I wanted to share with everyone one of our "non paying" residents of the camp I live in. She's a big girl, probably 8' tall, 1000#...and has a kid.


Moose-stang Sally and baby! Mama was named by Kurt, the wildfire firefighter who lives here...he sees them a lot and snapped this pic on Thursday, the day the calf was born. We have yet to name the baby, but we're all trying to think of something clever!
On Thursday and Friday of last week, I went through a bear behavior and awareness training. Since I'll be working in the bush with fish, the bears (grizzly and black) will often run into us. I learned both lethal, non lethal, and "less lethal" methods of deterring them. Lethal includes shotguns and rifles, and even the cracker shells or rubber bullets that can be loaded into the shotguns (the wrong placement could kill the animal). Non lethal includes: cracker shells, which are shells that detonate like an M80 60 yards out (have to be a good aim and get it between you and the bear...not behind the bear), and rubber bullets. 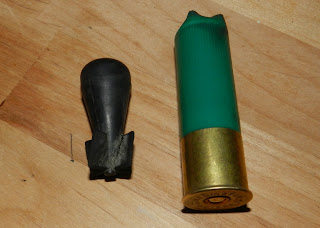 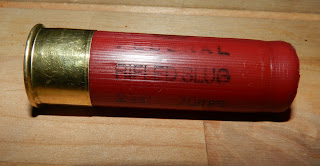 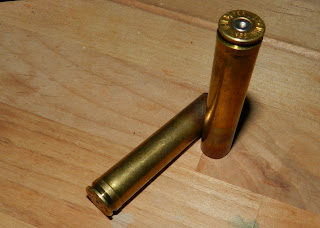 Rifle shells
After sitting through a classroom portion, we were introduced to the firearms. I was the only one who had never held or fired a gun before, so I felt a bit out of my element. But, the biologist, Ken, who was instructing us was very patient with me. I feel like I need to defend myself constantly on the use of guns...and it's probably all in my head but I still say it. I didn't grow up with guns in the house, and so I was never exposed to it. I'm not a hunter by nature, too much of a soft-heart, but that doesn't mean that I am against guns.
So the next day, Friday, we went to the shooting range to get used to handling, loading/unloading, and shooting the guns. 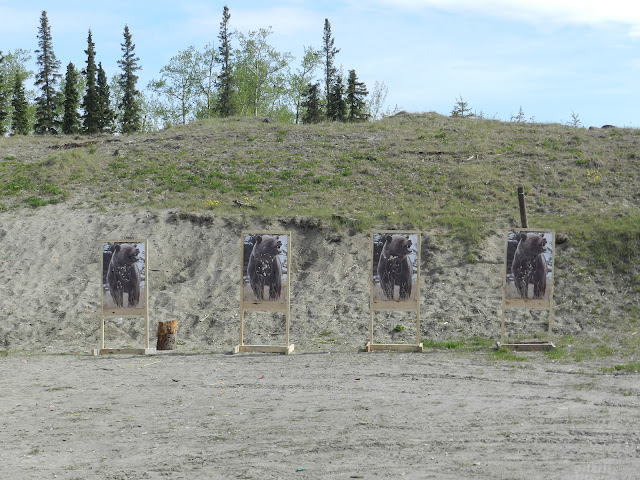 The targets
I think I did pretty well for my first time shooting and handling a gun. I was able to pull it up, get it in my shoulder, and fire off a round pretty quickly and relatively accurately on the still targets. 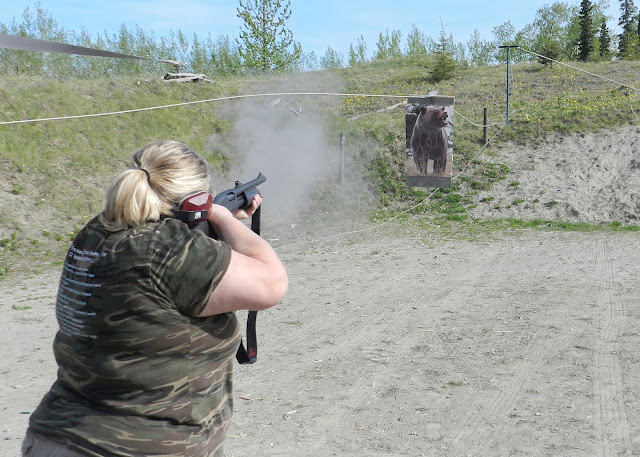 This was the moving target that we had to shoot at. It was rigged up on a pulley system, and someone would run with a rope and pull it towards the shooter. To be a designated firearm carrier, one had to get two shots within the "kill zone". It took me about 10 shells, but the last two made their mark. It was VERY empowering and exhilarating. 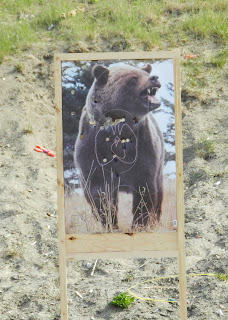 My still target: not bad if I do say so myself! I kept the poster as a reminder of how serious safety is..and it's pretty bad ass :)

I am probably the LAST person who would want to kill a bear. But grizzlies, and even blacks here, are very aggressive. Quick to defend territory and young. And working with fish out in the bush, we'll likely be coming into contact with them. A grizzly can run up to 35 mph! We were taught to use every resource available of non/less lethal means of deterrent before taking a lethal shot. But it can and does happen. Hopefully not to me though! 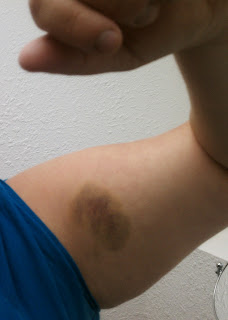 And this lovely bruise is what I have to remember my first time shooting a rifle by :)
There's more to the story about the moose, but the internet is aggravating me and it's getting late. More on Sally and baby tomorrow!
Written by: Alyssa Johnson at 6/04/2012 01:56:00 AM Labels: Alaska, Brown bear, Kenai Peninsula, Moose, Remington 870, Shotgun training, Student Conservation Association, USFWS