Since I arrived in Alaska almost 3 weeks ago, all I've been posting are pictures and stories of what I've been up to in my off time. I finally this week have begun to actually WORK! I had to sit through alot of orientation and policy talk, and training workshops. This past weekend I worked a festival here in the town of Soldotna that celebrated the mighty Kenai River. The Kenai is physically and economically the center of this peninsula. It provides revenue from tourists and fish as food for the local residents year round.

The movements and numbers of fish traveling the Kenai have been closely documented by the Fish and Wildlife Field Office biologists. The fish are such an important part of Alaska's economy, that big money is spent to learn about their habits so that practical laws and regulations can be put into action. It's called a "sustainable wild fishery".

There are multiple monitoring projects going on out of the office I work for, probably 2/3 of them are considered "remote". Only access is by float plane, or helicopter if water is too low to land on. The helicopter will literally drop a sling load on an exposed gravel bar, drop the staff off, and then they'll have to hike to their field camp and drive back with the boat.  I will be working on local projects, and to give you a taste of what that is, I'm going to explain what a weir is and how it works!

The Funny River, no idea where that name came from, is a tributary of the Kenai River. It's accessible to us, the Fish and Wildlife Service, by a private land owner. This man "homesteaded" his property...meaning back in the 50's when AK was becoming a state, he claimed his chunk of land and said it was his. It's a great cooperative project between a private citizen and a government agency.

This is what the Funny River weir looks like: 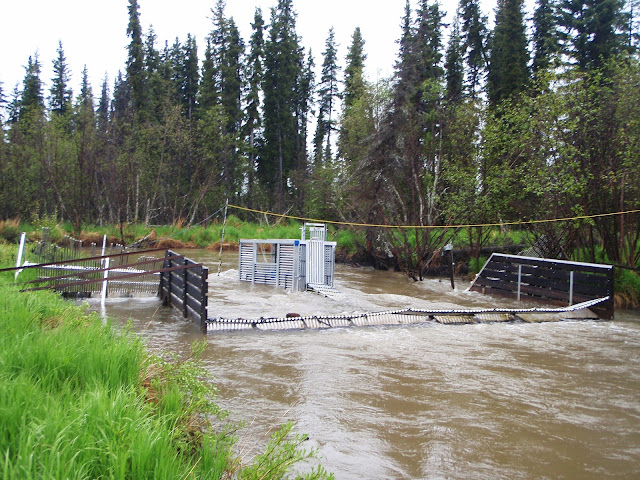 It's basically a PVC pipe fence that blocks fish from freely swimming upstream, while allowing water through. It angles at about 45* and is anchored upstream by sandbags. In the center, if you can make it out, is a tunnel that fish are channeled into. The big cage is a trap that is open at the time of this picture, but can be closed so that fish can be easily captured to take biological samples and measurements, and then released. And finally beyond that, which you can't see, at the base of the pole is the video box. 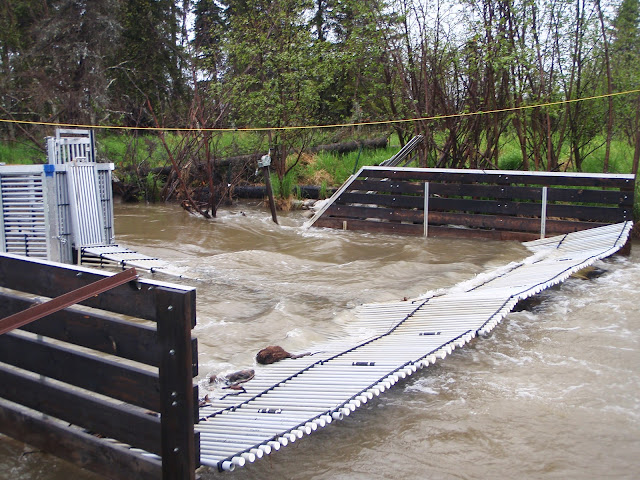 A closer look at the weir- daily I will be coming to this location and wading hip deep in the river to rake off the debris that gets caught up on the weir. This was taken on Wednesday the 13th, and today the 14th I couldn't see the PVC. We had about a day and a half of steady rain and the river rose a foot. It was pretty scary this morning wading out into that water! 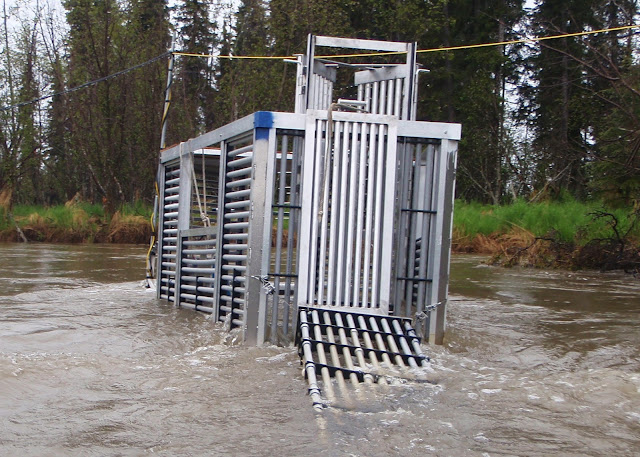 The trap for fish. Above the chute is the door that slides down to close it. 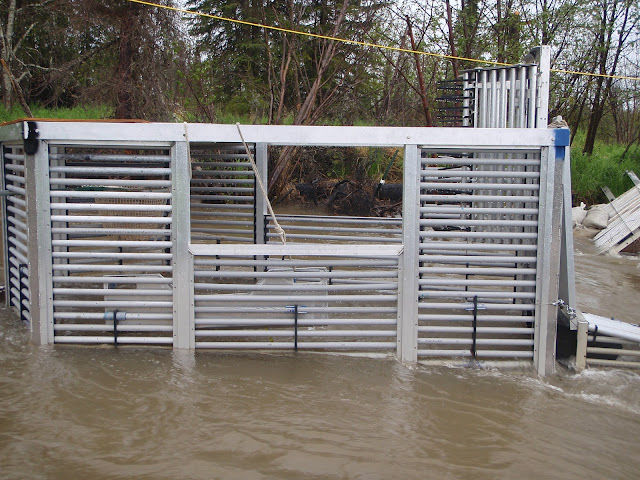 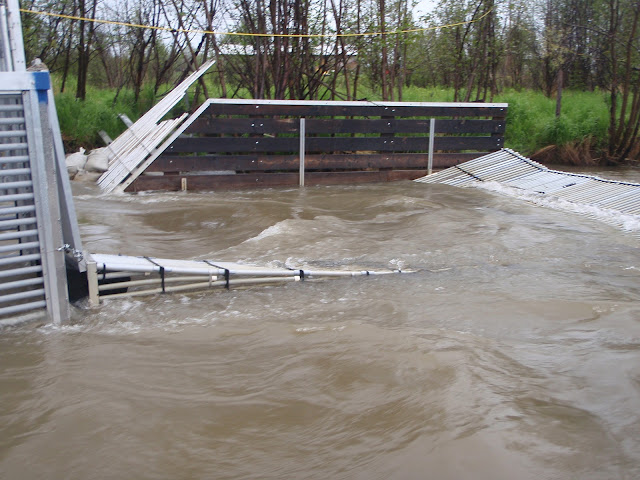 Looking downstream at the weir. 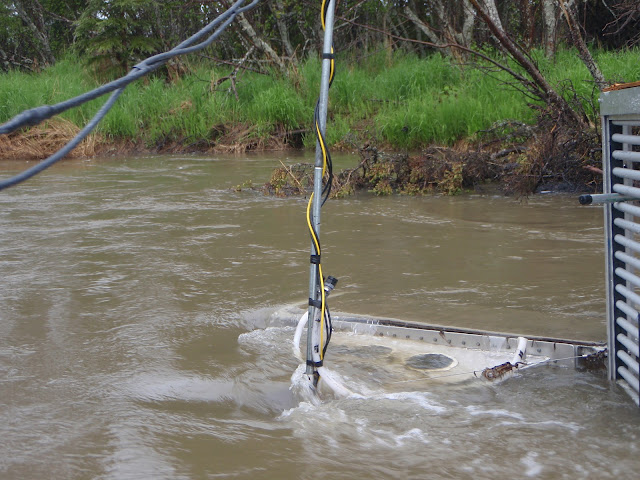 This is the housing of the video equipment. In years past, and maybe even on some of the weirs that are in operation now, someone would have to sit on top of the trap and watch as fish passed below. They would have a thing in their lap that they'd tick on to keep track of species and sex of passing fish. This was done from above, in all weather, and whether or not fish were passing. The team has this ingenious system set up of a video surveillance system. It's like camera trapping on speed! The camera is a regular security camera that you could buy for your house, and it's motion sensored. There is a water proof housing and light system that it's all rigged up with to keep it safe and well lit. It records if something (fish, debris, beaver, etc) swim upstream under the weir, through the tunnel, through the trap, and through the video box. The fish have to go this route, all other paths are blocked to get up stream. THEN, in the software you can search by day and then by hour for a "blip" in the recording, and then you view it from the comfort of your office or whereever. 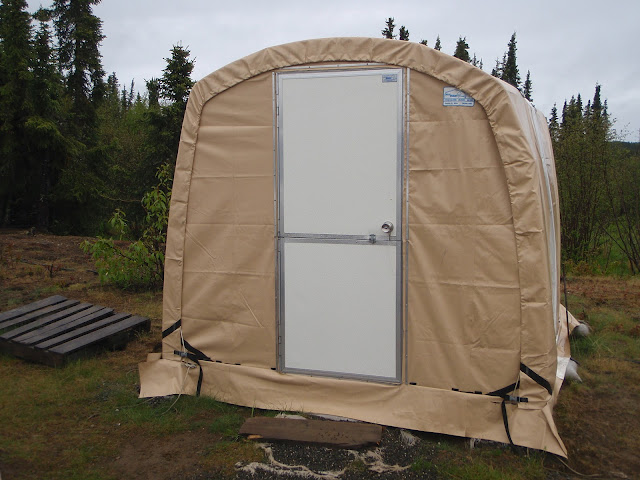 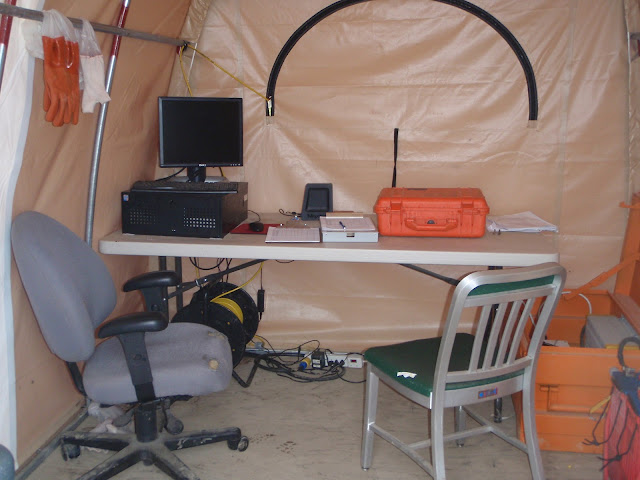 This is MY office for the summer :) It's a "weatherport", basically just a heavy plastic tent up on a platform. All the video recording equipment is housed here...and after I check the weir for any debris or faults, I sit in here and review the tapes. I'm able to fast forward, pause, and consult my Pacific Salmon ID cheat sheet :) 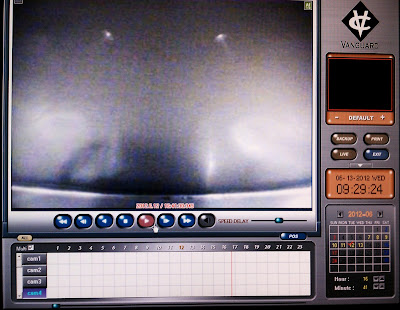 This is what the video software looks like...that gray area is a live view of the river. Nothing is swimming through at this moment, and the water is REALLY turbid due to recent rain events and warm of the glaciers (melt water). When we get some good footage I'll try to post some. It's really cool!
The species that are being observed are: 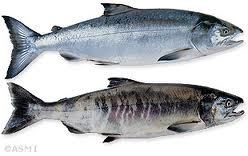 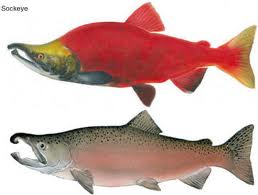