This past semester I became more interested in birding. Birds are so much more accessible than mammals, and to be honest- I knew very little about birds. I could identify common feeder birds, and birds of prey...but that was where my knowledge ended.

I did a bunch of birding in the Finger Lakes region of NY this spring with faculty and staff at school to study for a test that included NY birds, as well as just to get a taste for it.

Then I got hired to work in Alaska for the summer and many of the bird species that I'm comfortable with, aren't here! SO I've been spending time outside with my binocs, a notebook, a camera, and my field guides. The guides that I'm using these days are Sibley's Guide to Birds (the big one including all North American birds), and the Audubon Birds app for Android. Some people aren't big on apps as field guides, but Amazon.com gives away an app a day, and this one was one back in April. It's awesome...has tons a of calls, images, natural history, and the ways you can look up birds in ingenious. I can select a "type", so chicken-like for example, type in Alaska, and pick the month I'm in, and it will bring all the birds that fit those descriptions. So cool.

Anway, the following are some pictures I've gotten in and around Soldotna, AK which is where I live. 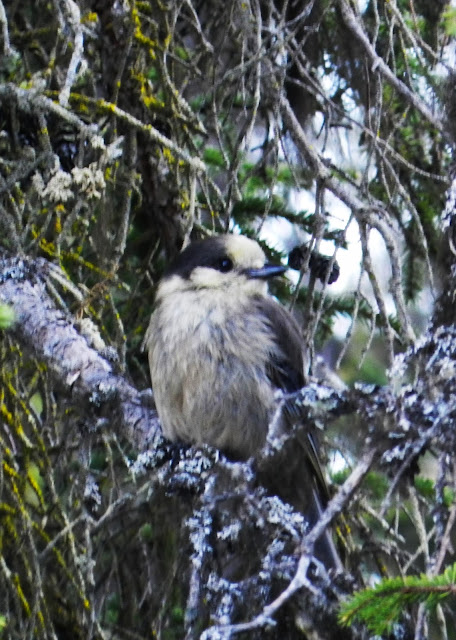 Gray Jay (Perisoreus canadensis)
I called 3 of these birds into me at once! Super curious, not exactly "tame", but definetely not shy. They've been known to thieve a campsite or picnic lunch. I love them! 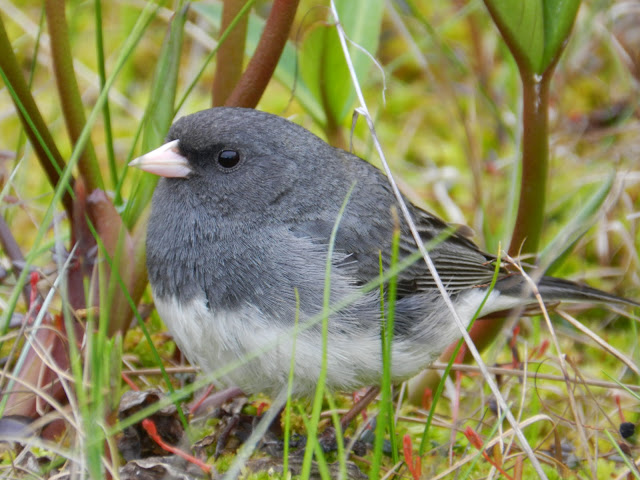 Dark-eyed Junco (Junco hyemalis)
I also called several of these little sparrows in as well (did you know D-EJ is a sparrow?!), which the Audobon bird app. I heard a bunch of birds calling, so I played the D-EJ call to see if it was them singing, and it was. This Junco above was particularly enamored with me/the app. It actually landed on my knee before uttering a sparrow version of "OH S***" and taking flight again. The picture above required little zoom action, this bird was very close to me! 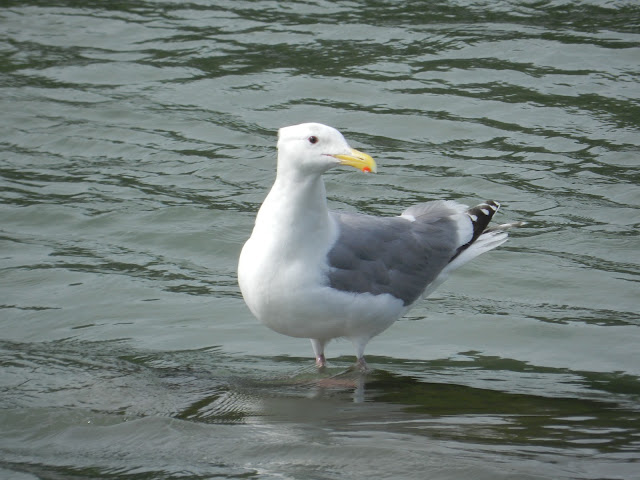 Allright, here we go with the gulls. I'm going to make it my summer mission to learn to ID local gulls.
For this guy here, I'm going with Glaucous-winged Gull (Larus glaucescens). I know these birds are common here, but I'm just a little stumped by the wing tip color. In Sibley's it says "wingtips patterned in gray, about the same color as the mantle (shoulders/back)". I think that this Gull's wingtips are much darker than the mantle, but nothing else really seems to fit with bill coloration, eye ring color, leg color...etc etc. I'm soliciting input here! 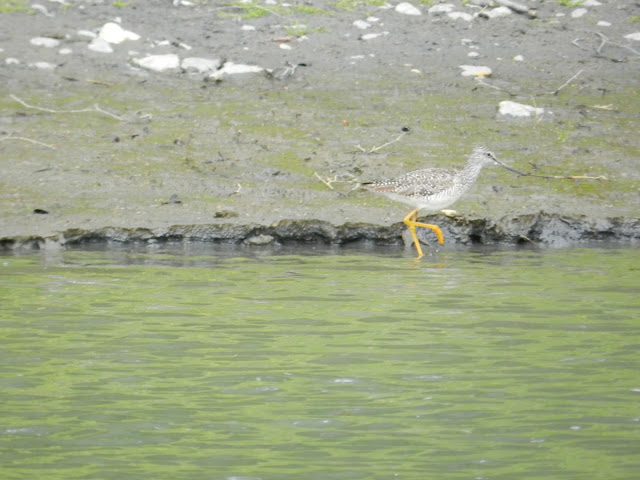 Lesser yellowlegs (Tringa flavipes)
I'm going with the Lesser and sticking to it! After careful consideration of all the other photos I didn't post, I'm saying Lesser because: the barring on the flanks doesn't seem to be AS pronounced as described for the Greater, the bill does not appear to curve upwards like the Greater, and it just was a delicate looking bird. Not to say Greater isn't, I just feel it was. And since I was with a bunch of 'Fish-heads" who don't care about it unless it's scaly and has fins, then I was the local expert and so I say Lesser! 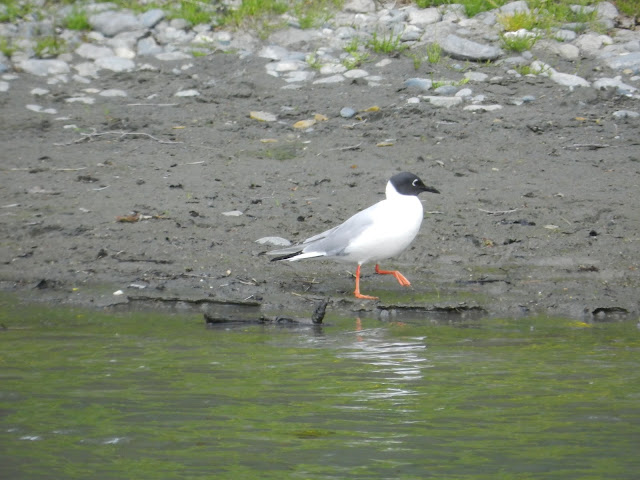 Stumped. Here are my choices: Bonparte's Gull (Larus phildelphia), Black-headed Gull (Larus ridibundus), or Franklin's Gull (Larus pipixcan). I guess I can be happy that I got it down to all the same genera...but I'm just perplexed! The leg color and hood shape and eye ring and bill color are all mixy-matchy with these 3 species, nothing seems to match up. I am LEANING towards Bonaparte's. 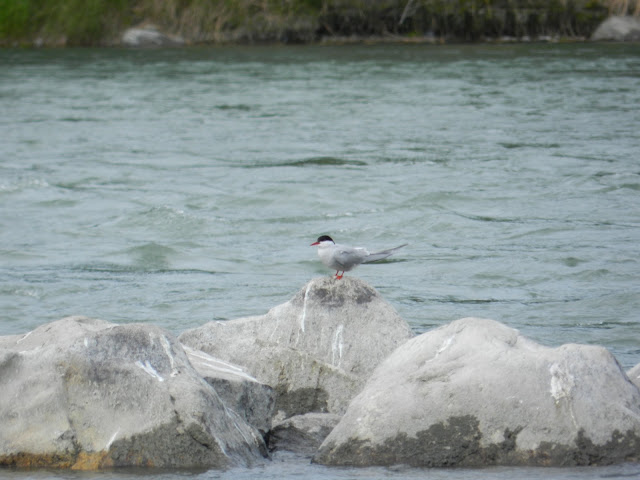 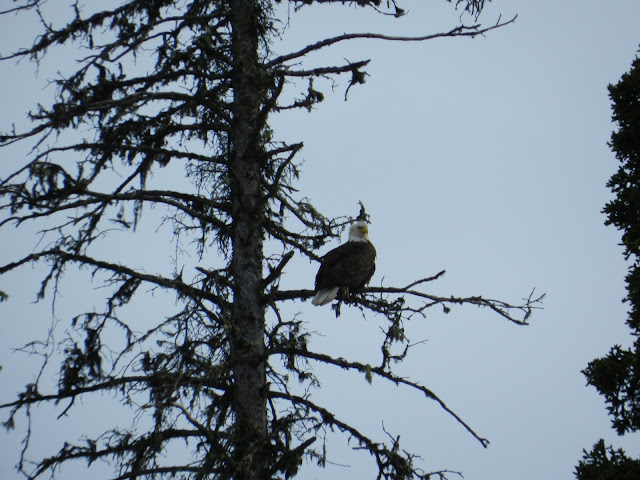 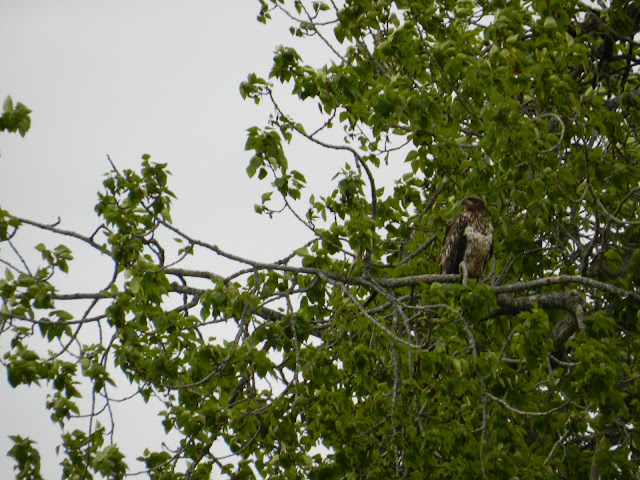 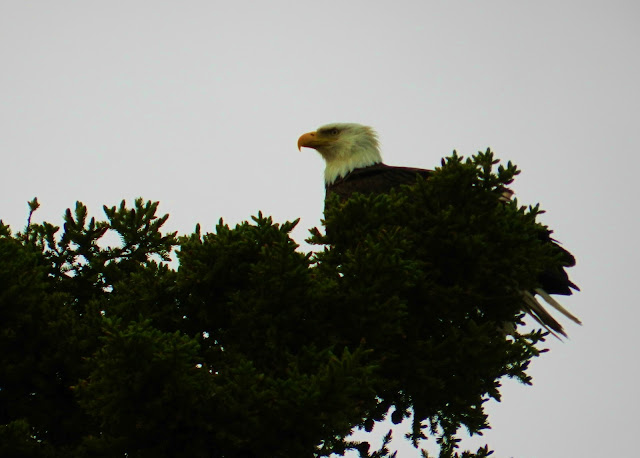 Bald Eagle - adult (Haliaeetus leucocephalus)
And that's pretty much my birds so far. It's a personal goal of mine this summer to get "good" at birding...and I don't think I mean being able to ID things right off the bat, but to be able to recognize key features that can differentiate species, and perhaps even sex of the bird. We'll see. There is a birding group that works out of the refuge I'm living at, so I'm going to try and hook up with them and take it from there! For now though, I'll just keep fighting with myself and Sibley's over what bird I just saw :)
Written by: Alyssa Johnson at 6/14/2012 02:03:00 AM Labels: Alaska, Arctic Tern, Audubon, Bald Eagle, Bonparte's Gull, Dark-eyed Junco, Glaucous-winged Gull, Gray Jay, Kenai Peninsula, Lesser Yellowlegs, Sibley's, Soldotna AK