I had started another blog posting last night, and I see it got partially published. I will have to delete and start anew. Something just happened, as in mere moments ago, that I must blog about.

For any family, friends, classmates, or blog reader of extended time- you all probably know my Big 3: Black bear, flying squirrels, and porcupines. I've had numerous accounts with the bears and squirrels. They're common-ish where I live in NY, if you know where and what to look for. The porcupine has been the bane of my existence this past year. In every field guide that I've looked in, they're "in range" in Western NY. I guess that doesn't mean that they're common, but they've been spotted before near where I live in the Finger Lakes, even by reliable close sources!

So I KNEW that when I came to Alaska, I'd have opportunity to see them. It's been 4 weeks, and I think I saw one on Friday night as we were whizzing down the Sterling Highway. Or it was a tire. But people here hate them because they are pests! I'm sure people in NY hate them too, but they're considered pests here because they ARE so common. People were in disbelief that I hadn't actually seen one here yet, where I live on the refuge. One guy who lives here, was telling me just before I arrived in May, he rode his bike down the hill (where this story unfolds) and saw at least 10 porcupines in this little field all grazing one night. 10! I don't think he was kidding, maybe embellishing, but serious that multiple 'pines were out grazing together. What DO you call a herd of porcupines anyway???

I've gotten into the habit of going down to the lake here each night to be "one" with nature. I am trying my hand at birding, and I don't know what else to do other than sit still late in the day with a camera and binoculars. The mosquitos are almost winning ...I may or may not need a blood transfusion tonight, even with long sleeves, pants, socks over pant cuffs, bug net, and bug spray (98% deet...). I finally couldn't stand them anymore and decided to walk back up the hill and go to bed.

About halfway back, I see a lump in the road. I literally stopped walking, and swore out loud because I could not believe my eyeballs. 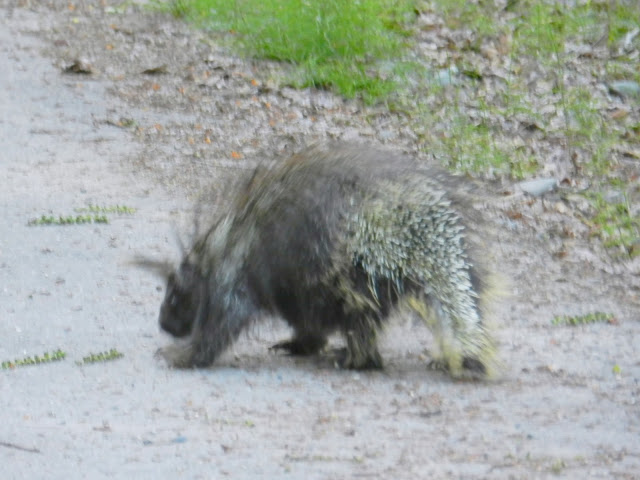 I apologize for the quality...it will get better. This was before she noticed me, even though I did drop a nasty word. Loudly. It's a North American porcupine (Erithizon dorsatum)!!! 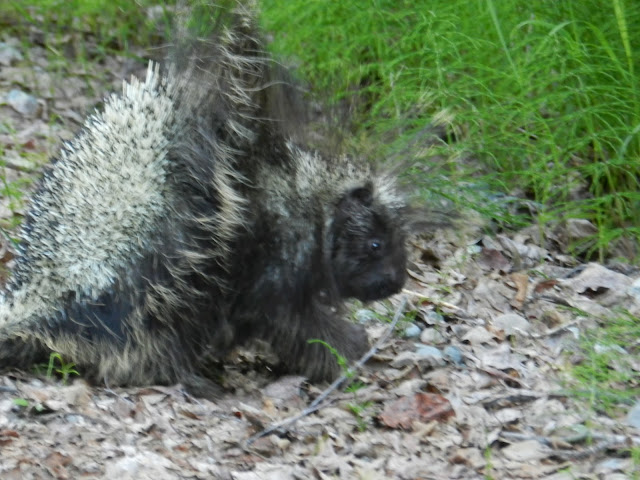 As soon as she heard me: quills up! And she stood stock still in the defensive stance. They don't run, as you will see with my following pictures. They just hunker down and let the quills do the talking. 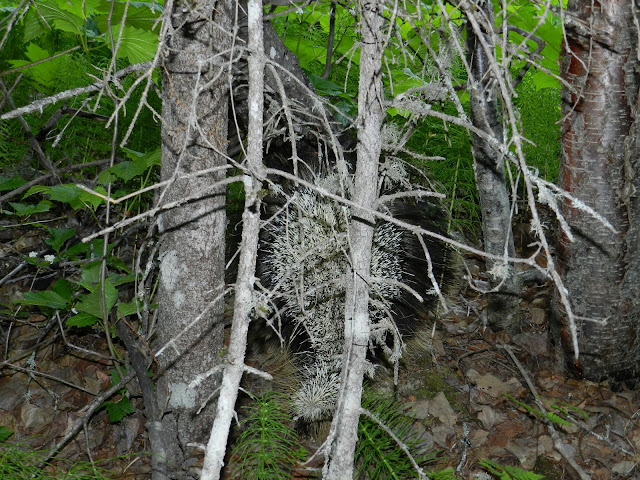 After a few moments of a stand off, she decided to take to the trees.
I would like to take this opportunity before I continue to give myself a bit of a disclaimer. As a budding biologist and naturalist, I of course have the best interest of the wildlife in my mind always. I try to lead by example, and only enjoy wildlife when our paths cross naturally, and from a safe distance. The following pictures are awesome, if I do say so- but really anyone can be a "photographer" with a digital camera and photo editing software. I was incredibly close to this animal, but I didn't touch her or outwardly harass her. I guess my presence could be consider harassment, but I feel like we had an amicable meeting. I have close up pictures due to how close I felt comfortable getting, as well as a 36X zoom :) 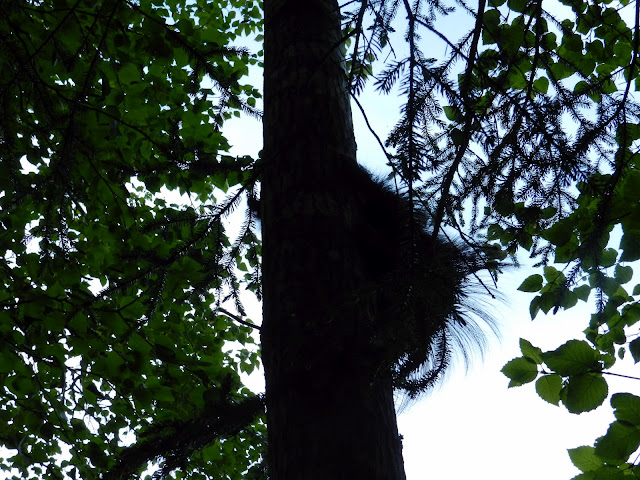 She apparently didn't like my company on the ground, so she climbed up this aspen about 12 feet. As I circled around her, she kept her beady little eye on me, and as I stood back and still, she relaxed and scooted around the tree to better see me. 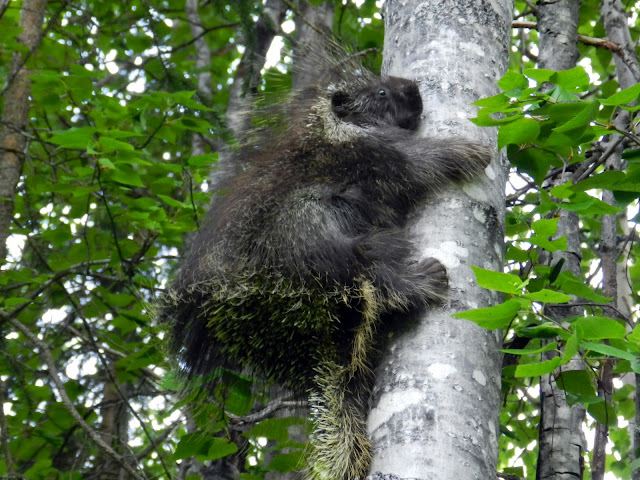 I can tell you that she's relaxed and at ease in this moment. If I moved at all, even just to raise the camera or swat at a mosquito, she would present her rump and stick those quills up. 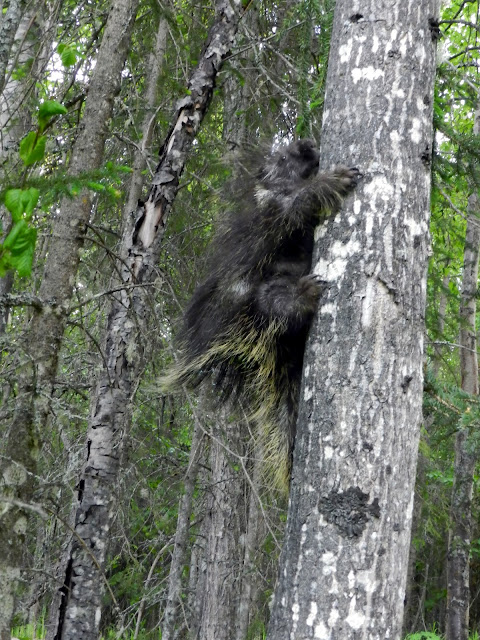 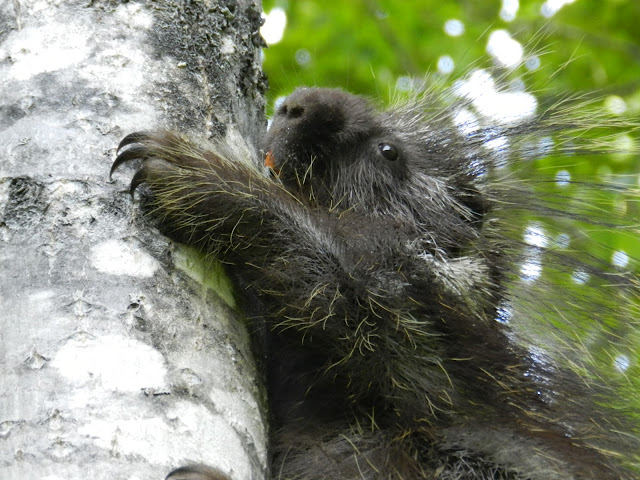 Did you know porcupines are rodents? They are NYs, and AKs for that matter, second largest rodent after the beaver. Those orange incisors are a giveaway- not all rodents have orange incisors, but they do all have inciscors that constantly grow through out their lifetimes. The constantly grow, so that's why rodents are always found to be gnawing on woody materials, and even bones/antlers. 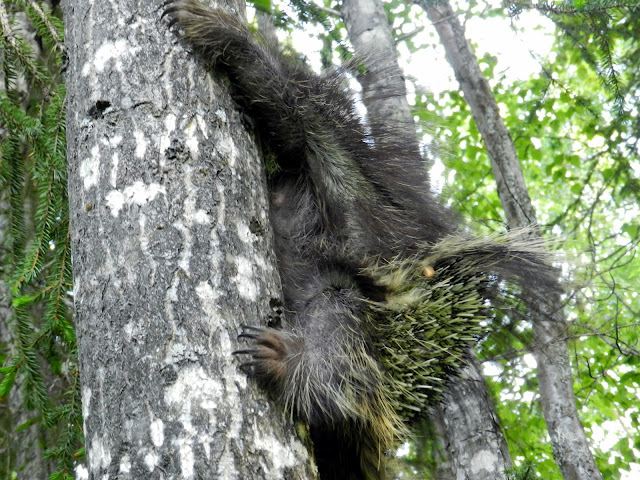 One thing I love to learn about are the animals feet and the tracks they leave behind. The porcupine was just above my eye level here, and just hanging out. I was able to really look at how strong her feet are. I wish I could've seen the pads of the feet, or tracks, but that didn't happen.
Also, this picture shows why I'm saying this is a female. There are nipples readily visible, and according to everything I've read, they give birth in late spring to a single precocious baby. And here in AK, even though summer officially begins tomorrow, it still is late spring. Everything is a bit behind here, I'm sure due to climate.
At field camp last month, John taught students about tracks. Students were introduced to trails, how to measure stride and straddle, gaits, how animals walk, and track characteristics. He has a really cool collection of rubber tracks that were purchased, unfortunately he didn't make them. And I swore I had taken a picture of the porcupine tracks. I remember telling students (I was working as a technician), that I was fascinated by the porcupine's pebbly looking pads, and long nails. It's such a distinctive looking track! They also walk on their full foot, or plantigrade. See the first pic, although blurry, you can totally see it! 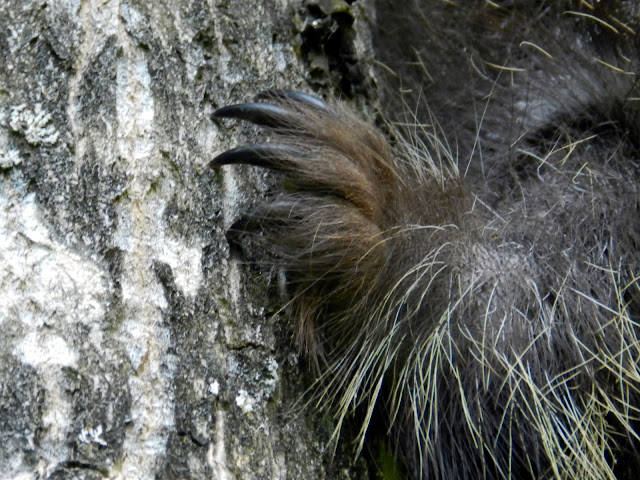 Long, long nails. The pads of her feet, I imagine, were like crampons that we'd wear on the ice. Or like those little nubs that Northern river otter (Lontra canadensis) seem to have. And then the nails are like a peevee, a tool used for moving lumber- to keep a firm grip on the wood. 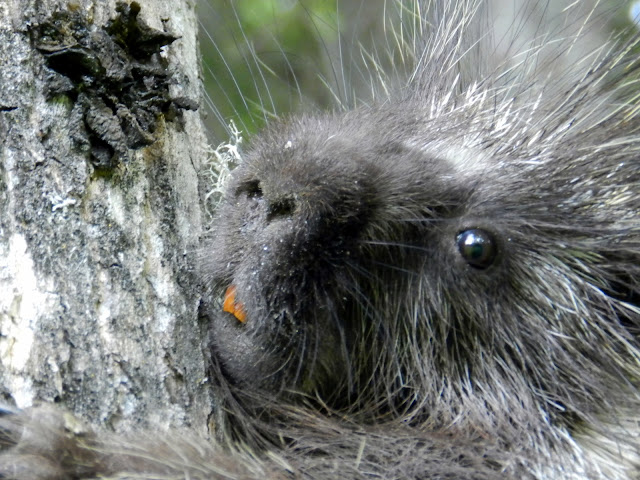 You can't tell me that this is NOT an adorable animal. Quills or not, look at this face! 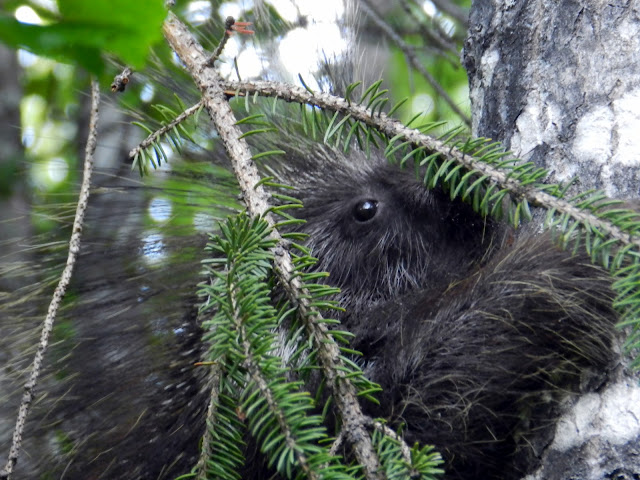 For a minute, she shuffled around the tree and I think was trying to camoflage herself amongst the spruce needles... 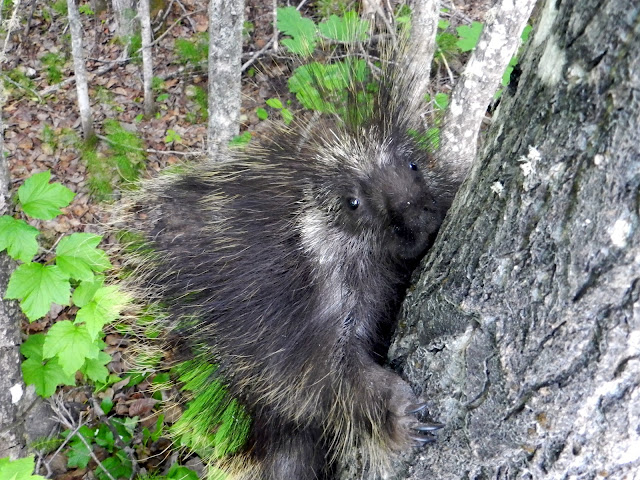 Finally, after about 5 minutes, she determined that I was no major threat and she began her backward shuffle. I guess I was feeling bolder too, so I took a step toward her and stretched out my arm to get this shot. Thank God for a slow porcupine and a digital camera. Several blind shots later, I got this keeper and I have to say, it's a cool shot! 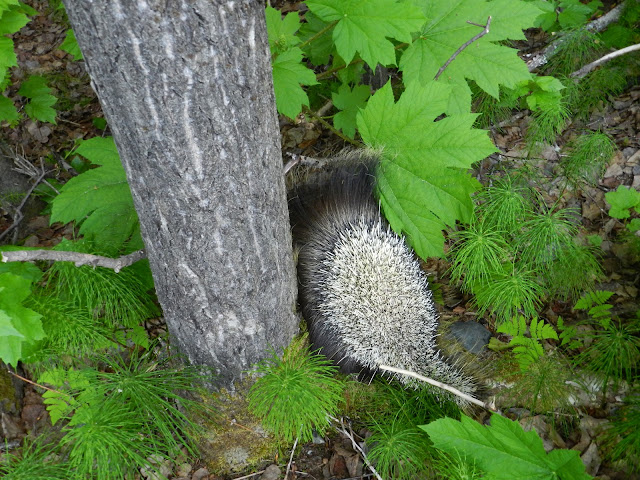 And that was that! Once back on solid ground, she gave her quills a shake and Miss Quill Piggy moseyed on back to the roadside for some grazing. The mosquitos were now REALLY bad because I was in the woods, and so I said goodbye to one of my Big 3, and ran up the hill to write this entry :)
Written by: Alyssa Johnson at 6/20/2012 04:00:00 AM Labels: Alaska, Erithizon dorsatum, Kenai National Wildlife Refuge, Kenai Peninsula, North American porcupine, Rodents, tracking