Today I finally got to handle fish! This is what I love most about the field: hands on, up close and personal with the animals, that allows me appreciation of the species. That's what zoos are all about really, bringing exotic and native wild animals into your community to offer you the chance to fall in love with them and perhaps help conservation efforts. Except I'm going into THEIR community and learning about them.

Last night Jeff, my supervisor, went to the Funny River where the weir is set up, click that link for the pre-story. He closed the front of the trap, upstream, and then closed the fike (see below). 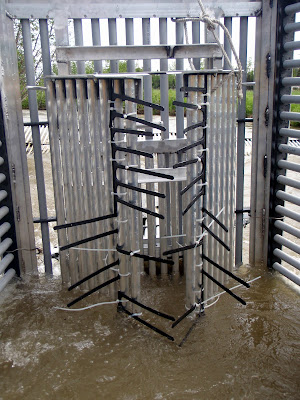 The fike allows fish to swim in, but makes it difficult for them to swim back out.

The black plastic are called "cod fingers". Don't know why, but there's some fun trivia for you!

It reminded me of the Montezuma Confusion Traps that we saw when duck banding this spring with the USFWS on Cayuga Lake.

All of those fingers do close, they just got bumped into a bit while I was in there...wrangling.


So Jeff and I climbed in, he handed me this HUGE net and said...go for it. 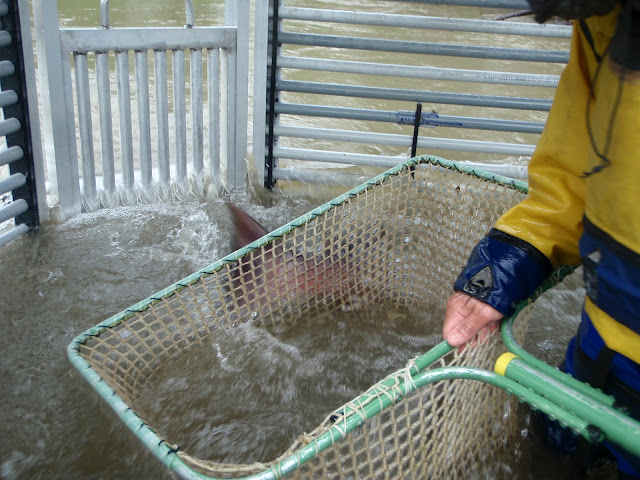 This is Jeff, but you can see how small inside the trap is, and how big that net is. I'll let you in on a secret too: there are 34 large chinook salmon in there with us. 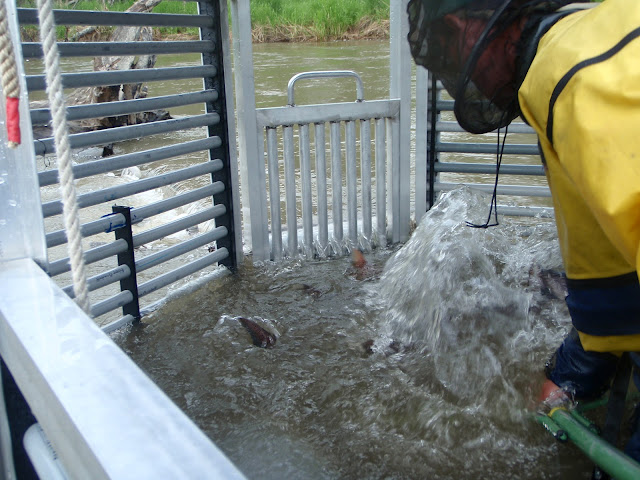 Once a fish is in the net, it's "FISH ON" as Jeremy Wade (River Monsters) would say. It's like a bull in a china shop, a bucking bronco, a tasmanian devil....the fish flip out and try to get out of the net, and meanwhile you're crashing around trying to fight the current, tripping over the other fish, and trying to get the fish turned around into the cradle. 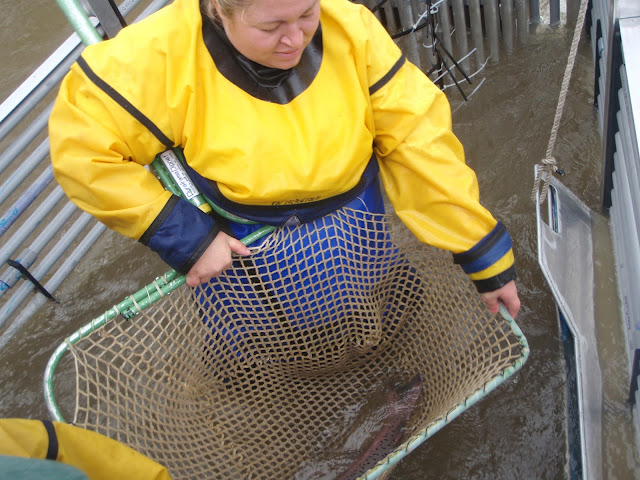 So here I am with a chinook. The cradle is to the left, and that's where we hold the fish while processing it. It keeps them still, confined, and in the water. 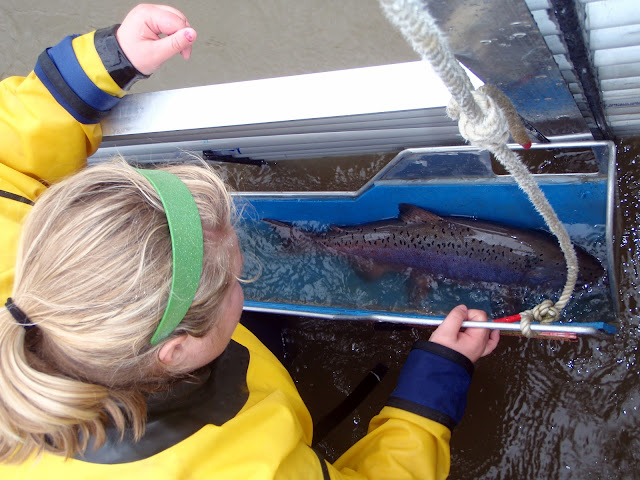 Also, I have to comment on what I'm wearing. It's a dry suit, but feels like a huge zip-loc bag, and looks like a space suit with rubberbands around the wrists and neck. It's kind of uncomfortable, but I much prefer it to the 45*F water! 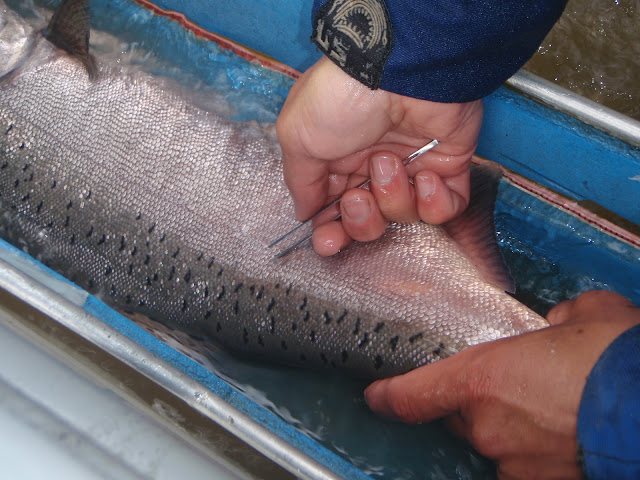 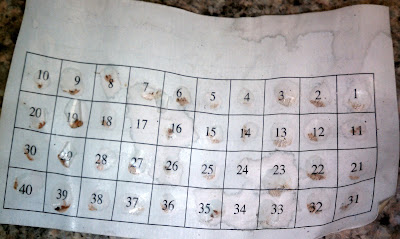 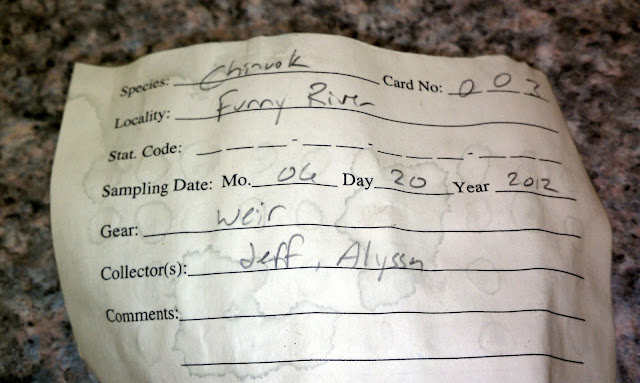 Afterwards, the cards are dried and pressed flat and eventually someone who has been trained, makes an acetate copy of it (kind of like using superglue when lifting finger prints..it makes the print/scale ridges rigid and more permanent), then the scales are aged. 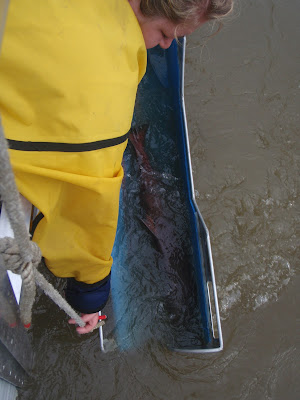 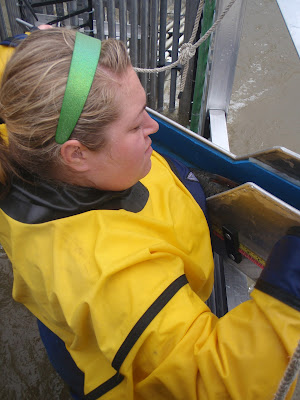 Finally, when all data is collected, the fish is lifted in the cradle out of the trap and released back into the stream. 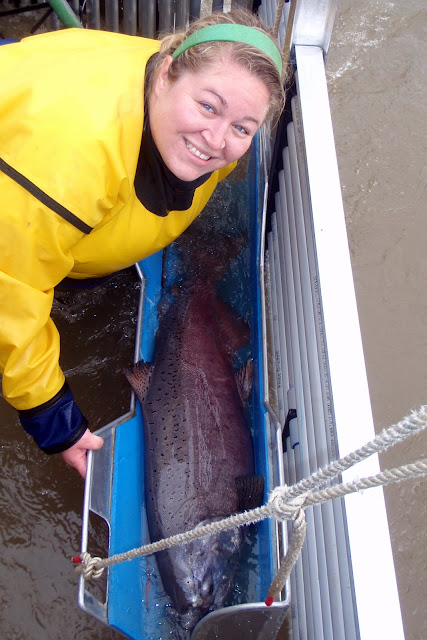 It was a great day! The chinook are really running now, I think we processed 34 fish today...which is remarkable. Last week this time we had MAYBE 2-3 fish coming through the weir in a 24 hour period. The trap was only set for 12 hours. This fish above was 100cm long, and about 50#. He was the last fish I caught...and it was like netting Jaws. He was a big boy!
Written by: Alyssa Johnson at 6/21/2012 01:33:00 AM Labels: Alaska, Fish weir, Funny River, King salmon, Scale sampling, Student Conservation Association, USFWS