X does NOT mark the spot...

This post is going to be about mammals- I feel like I've been neglecting them since I wrote about Moose-stang Sally a few weeks ago.

This week I've found several sets of tracks in amazing substrate that have to be shared.

The first was at the Funny River Weir, that I've recently written about. Apparently the Kenai Peninsula had records snow fall amounts this past winter, and because it's warming up- all of the snow pack is still melting up in the mountains and rushing down stream to where I live. The rivers are swollen, and last week they were raging. Because of this, right next to the weir, a bit of sand and silt built up, kind of making a little beach. Several days ago I went to check water levels, and noticed these tracks: 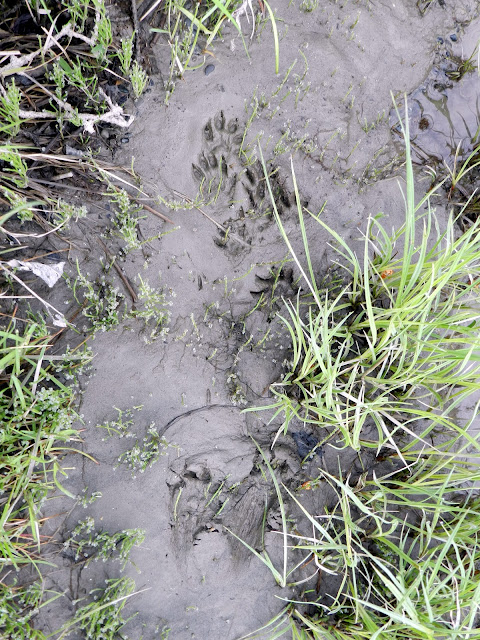 ...and my mind began to spin.
I instantly thought a member of the weasel family, the Mustelids. And here's why:
Does anyone else suffer from "sensationalitis"? It's a condition I suffer: when ever I get a blurry trail cam pic, or smudgy track, or some other kind of animal sign...I pick the coolest animal it could be, then say it is so. I was convinced that this was a river otter track. It just seemed so big to me, but as always, the voice of reason told me to "think mink". 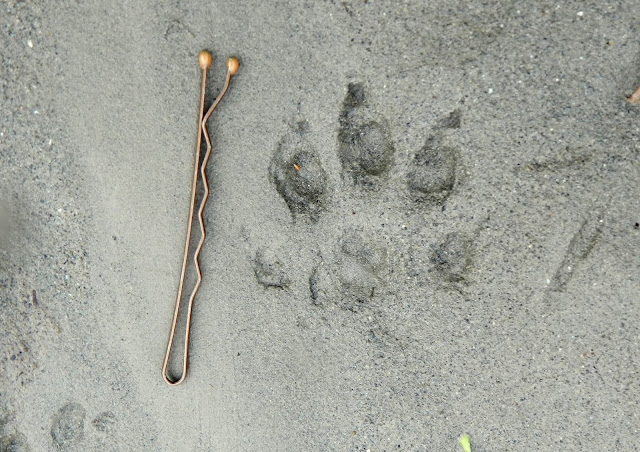 That bobby pin is exactly 5 cm long, and it was the only thing I had to use for scale. According to the little tracking book I'm using (Track Finder by Dorcas Miller), mink tracks fall below that. Otter are almost double that in length. SO, the voice of reason is correct again: mink (Mustela vison). 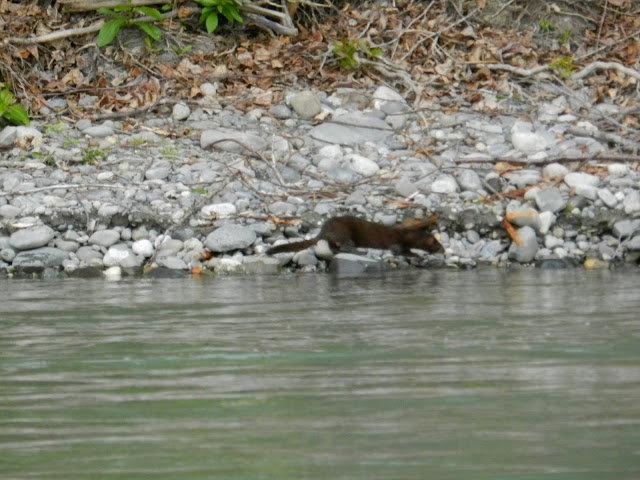 I took this picture of a mink, not on the Funny River, but on the Kenai River several weeks ago. They are here!
The next set of tracks I have to share are a brand spanking new find for me. Several days ago, I was out with Jim, a biology technician out of the office I'm interning at. He is currently working on his Masters degree, and is tracking the movements of fish through the Anchor River here on the peninsula. At one of the sites he had to check, we had to take an ATV back into the woods. I rode on the back rack, as we went in and we hit a low spot that had recently held alot of water. At this point, it was a nice thick, smooth mud. This is what I saw. 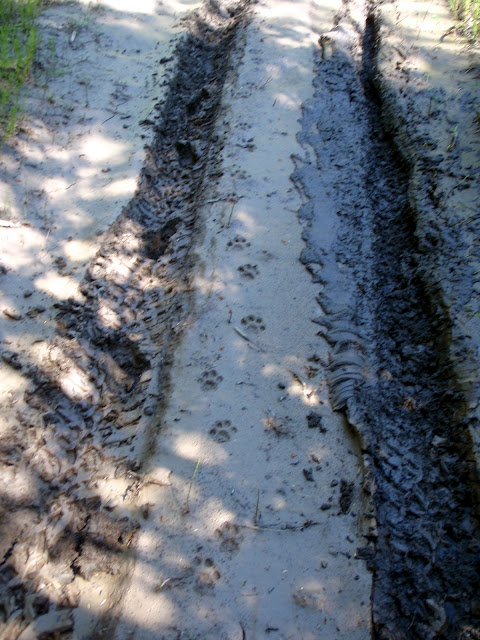 The beautiful overstep walk of a lynx (Lynx canadensis)!
As soon as I saw it, after the ATV tracks were made, flashes of cougar, gray wolf, bobcat, dog, lynx were flashing through my mind. In this case, I was underwhelming myself. Trying to talk myself of the edge of a big carnivore. I've NEVER come across a track like this in NY. I have had a fair experience of black bear tracks now, but this was definitely not bear.
These were my initial observations: 1) the tracks are so round, 2) no X (I'll explain this later), 3) edges of pads were blurry, not totally crisp, 4) LARGE, 5) I felt that this animal was walking, as opposed to trotting or running, and 6) no nails!
For ease of explanation, when I say "cat" I mean generally all cats domestic and otherwise. When I say "dog", I mean domestic and otherwise. I'm referring to the family.
1. So cats have round tracks, and dogs have oval tracks: generally. Of course there's the oddball out there that defies this rule, and of course the substrate (or what they're leaving tracks in) can effect this too.
2. There was no "X". When identifying a cat or dog track, an easy way to decipher the difference is by laying an X with sticks, or pencils over the track. If the sticks can lay comfortable through toe pads and around the metacarpal (big pad), then it's a dog. Cat tracks won't allow a clean passage between toes. The "X" will cut into the metacarpal pad. For more succinct information, see Cat Track Fever II.
3. Edges of the pads were blurry! Why? Because lynx have incredibly furry feet that act as snowshoes in deep snow.


So if you have a pet cat, imagine what their toes look like. Very clean and if you have seen wet tracks on a hard surface, you can definitely see edges of the pads.
4. Lynx tracks are big. They are a big cat, so of course they'll have big paws to support and distribute their weight. Width can be up to 10.8cm and length 14.3cm (Mammal Tracks & Sign by Mark Elbroch). As you can see below, this is a nice sized track. 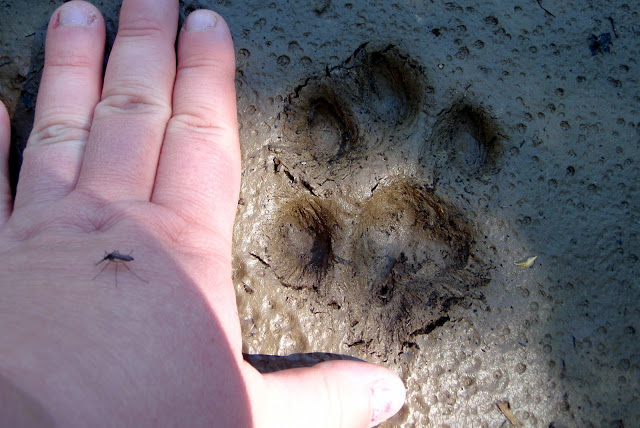 The spread between by thumb and tip of my index finger is just about 10cm, to give you a frame of reference. Can you see the "furry-ness"??
5. Gait: I've done a lot of thinking about the movements of animals for the past couple of years. Tracking, as many of you may know, is such a cool way to study wild animals, even if we can't watch them. They tell us so much about their habits, movements, and how fast they're moving. Because I'm not very well versed in tracking, I'm going to tell you how I came to the conclusion that this is an overstep walk. Walking because the tracks aren't spread way out, and the trail is wide. When animals, and even us, move fast, our strides lengthen and the width between our paws or feet narrows. Then for the overstep part- I compared to various pictures. I have nowhere NEAR enough experience being able to tell lefts, rights, rears, fronts by myself. If I had time to really study the tracks with a bit of positive reinforcement over my shoulder, I may have been able to come up with all of that. It's tough though. I'm just pleased for now that I came up with a species (and it was confirmed by Jim), and that I knew relatively how fast the animal was moving.
6. Cats generally do not show their nails when they are moving on flat ground. Their claws are retractable and therefore rarely show.
I feel like I'm rambling a little bit...so I'll conclude with the rest of my kick-ass pictures! 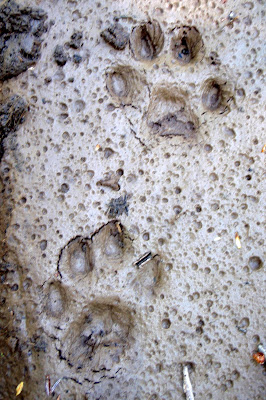 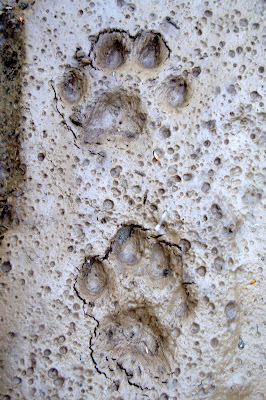 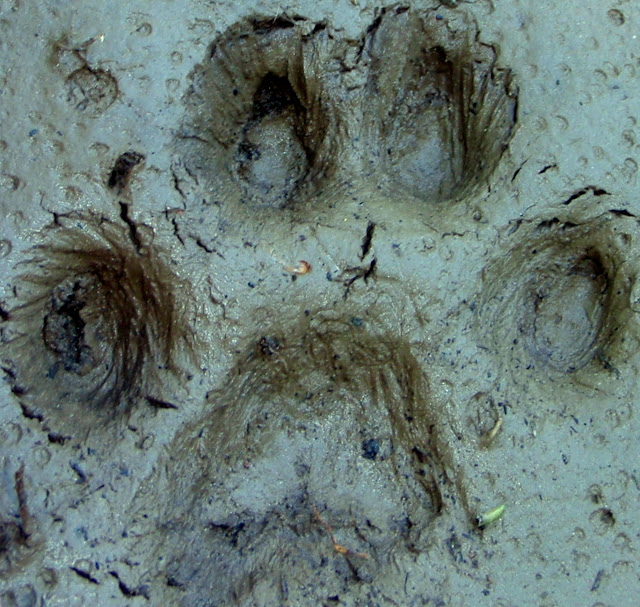 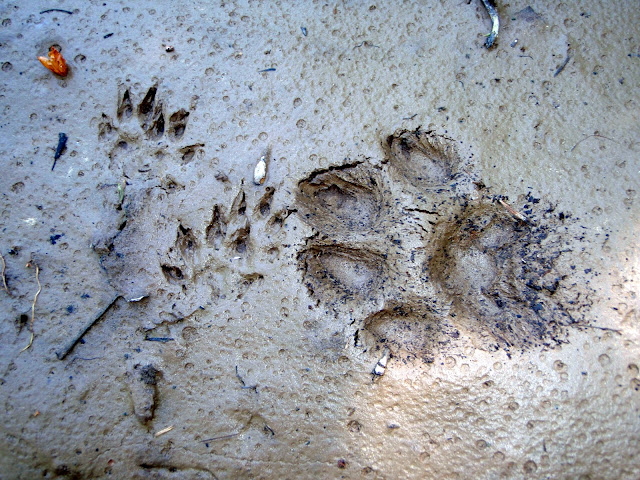 How's this for a cool picture? I believe those are again mink tracks, running perpendicularly to the lynx. Also, the pebbled appearance of the mud is from rain the night before. These tracks (both sets) fell since the rainfall...very, very fresh! 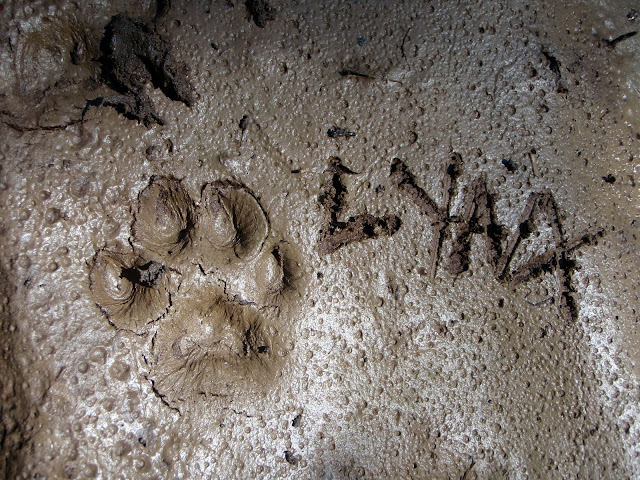 And that's all I got! I wish I had been able to talk more about the minutia of tracks, I'm just not there yet though. For now, I'll continue looking on the ground for all the clues left behind...and then sharing them with all of you!
Written by: Alyssa Johnson at 6/23/2012 03:05:00 AM Labels: Alaska, Funny River, Kenai River, Mink, Soldotna AK, tracking