Since I arrived here in Alaska, I've been really interested in learning "how to bird". I know many people go birding in their backyards, and they haven't necessarily learned a method to birding. I fit that description- watching for whatever comes to my yard, to the feeder, or whatever happens to fly in front of my while out and about. Only this past semester have I really gotten interested in seeking out birds to study them.

I was told by many that Alaska is a great place to bird, especially in the early summer when I got here. I don't get to spend a ton of time on the coast, hardly at all actually, so I haven't seen too many of those kinds of birds. But interior waterfowl, gulls, and perching birds are readily available to see here.

I've been spending a lot of time by myself, going out after work, to sit with my binoculars and Sibley's Guide to Birds book and Bird Tracks & Sign (Elbroch & Marks) and trying to figure out what I'm seeing. I also have this awesome book called Alaska's Kenai Peninsula Wildlife Viewing Trail Guide.

That gets old though, and you can only go so far with it. So I surfed around the WWW a bit one night, and sent an email to the bird biologist at the refuge that I live on, and he suggested I get in touch with this birding club.

I spoke with Ken Tarbox, the president, and was welcomed to join the next club outing, which happened to be the next day!

I met the club early in the morning at a local grocery store, and we carpooled out to Hope, AK. Which was a several hour drive, partially because we stopped a few times, and also it's really far out in the middle of nowhere! 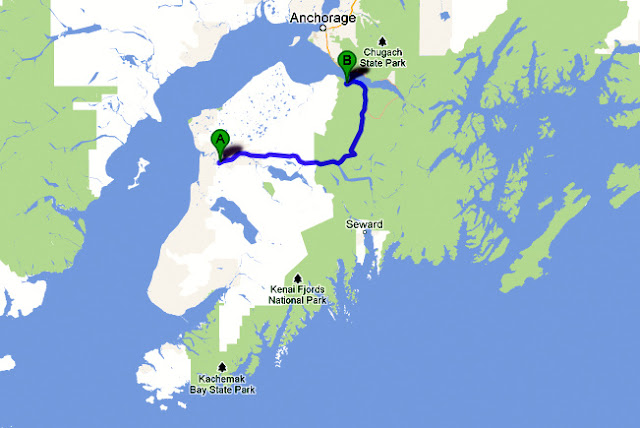 'A' is where I came from, 'B' is the "town" of Hope. Hope was once a booming gold-mining town. The original structures from 100+ years ago still stand. Well, some of them...in 1964 a huge earthquake hit the area and half of the town sank 6 feet into the Turnagain Arm, flooding. It's kind of dried up, but has a lot of character.
We took this road called Palmer Creek Road which is described as "climb[ing] from a Lutz and white spruce forest only a couple miles from Turnagain Arm into alpine tundra and brush" (AKPWVTG). It's a 10 mile dirt road that winds it's way up through the Kenai Mountains, gaining thousands of feet in elevation as we started very near to sea level. If you've ever been to Glacier National Park, and taking the Highway to the Sun, it's like that. About halfway up the mountain side, and winding around each mountain. Every bend reveals a new landscape to stare at in awe...it was so gorgeous up there! 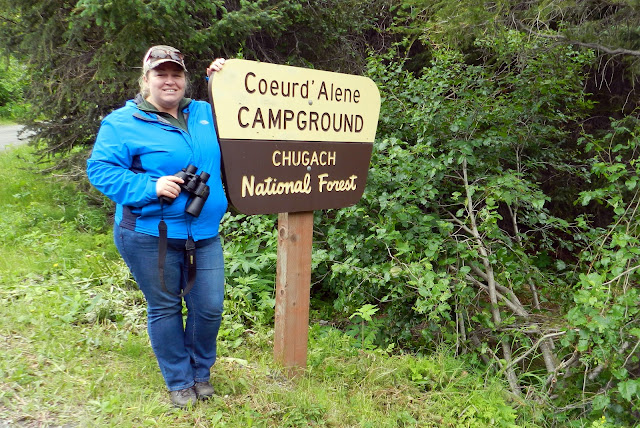 Mile 6 brought us to this campground. We stopped for a potty break, and to check out the trees to see if any birds would show themselves. 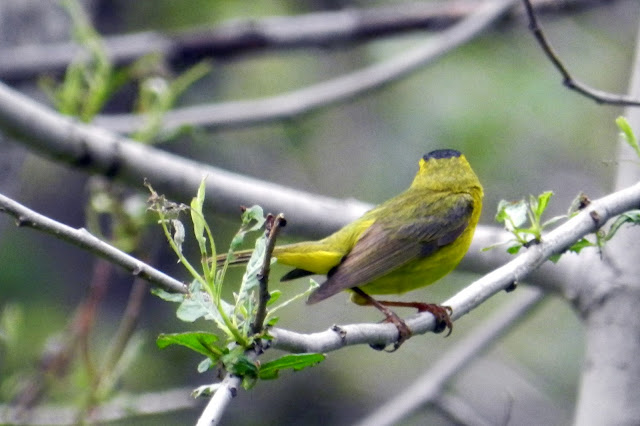 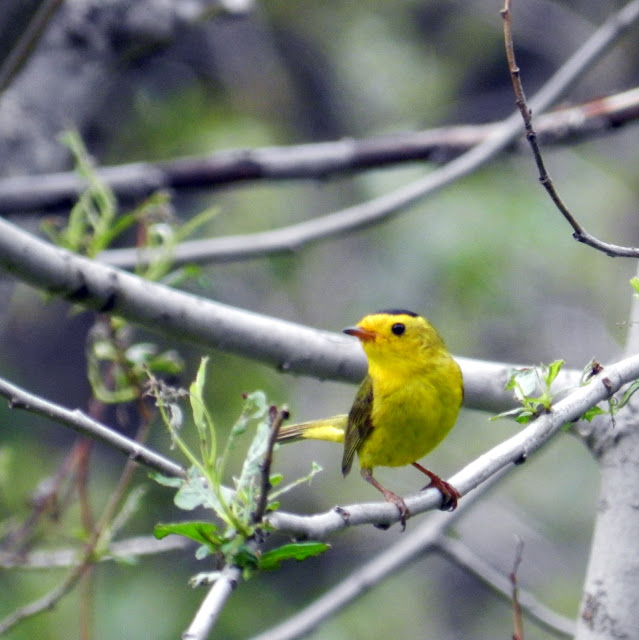 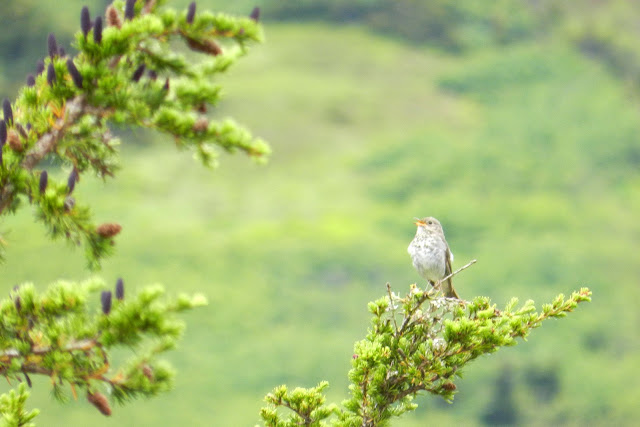 Hermit Thrush (Catharus guttatus)
After a few cool sightings, we moved on past the campground. This road is an old mining/logging road, and it's STRONGLY recommended that your vehicle is high-clearance and has 4WD. I've never been to Africa...but this is what I would imagine a safari tour would be like. Bouncing over the road, and the higher in elevation we got, the vegetation cleared out, so we could see a long ways. 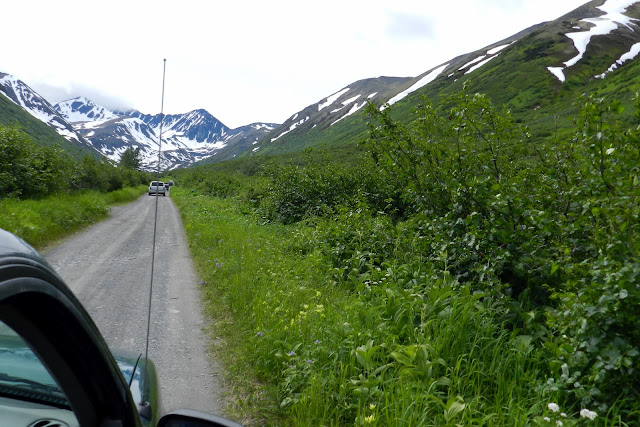 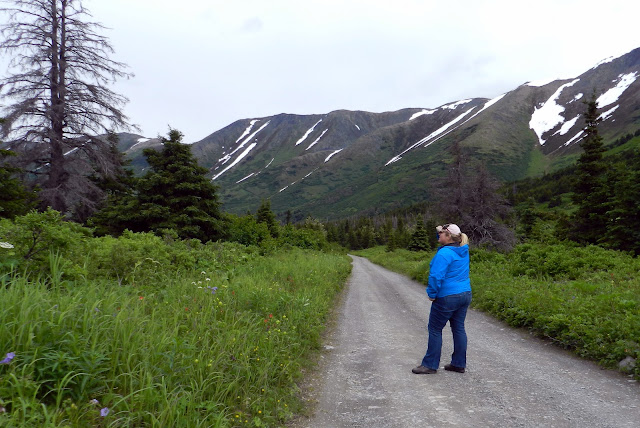 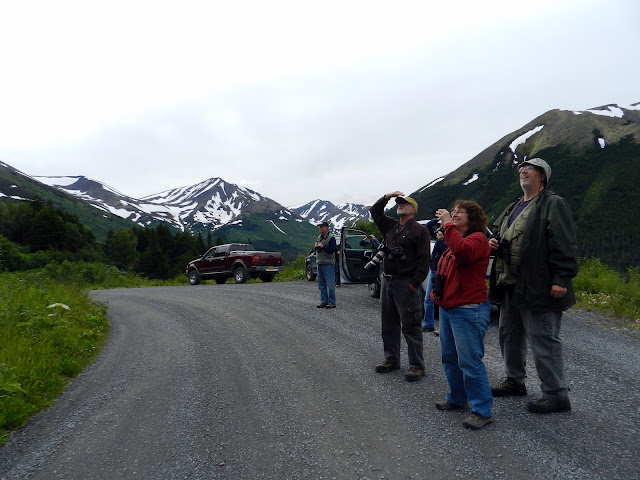 Every so often we'd stop and get out and call for birds. Ken, the president, is at the right.
Along the way I took some pictures of the wildflowers that are in bloom. They are absolutely gorgeous right now, and I'm trying to learn my local flowers! 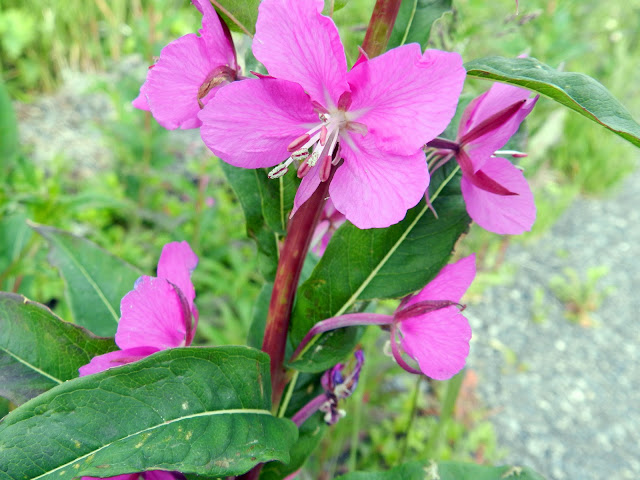 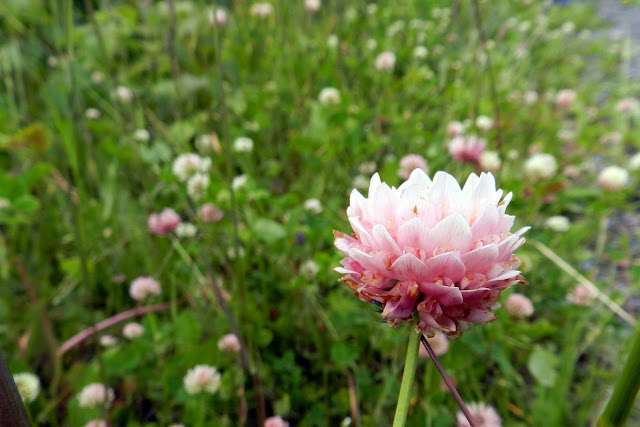 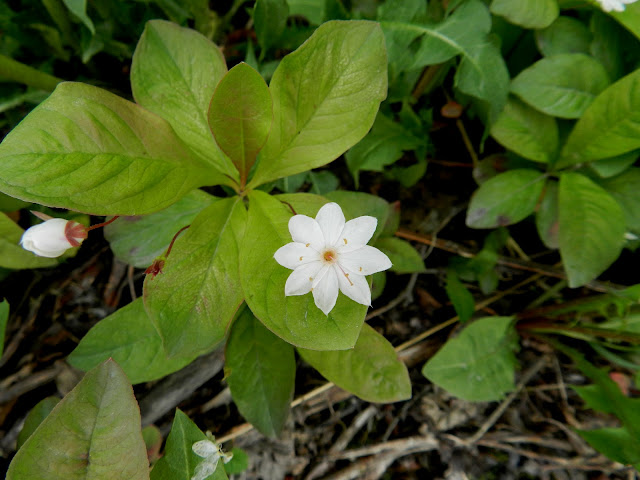 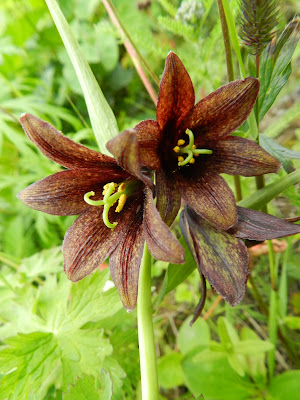 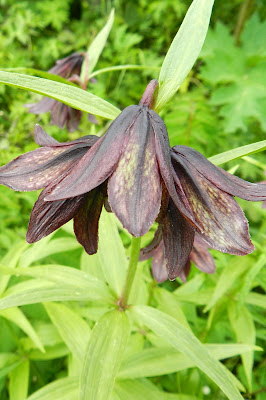 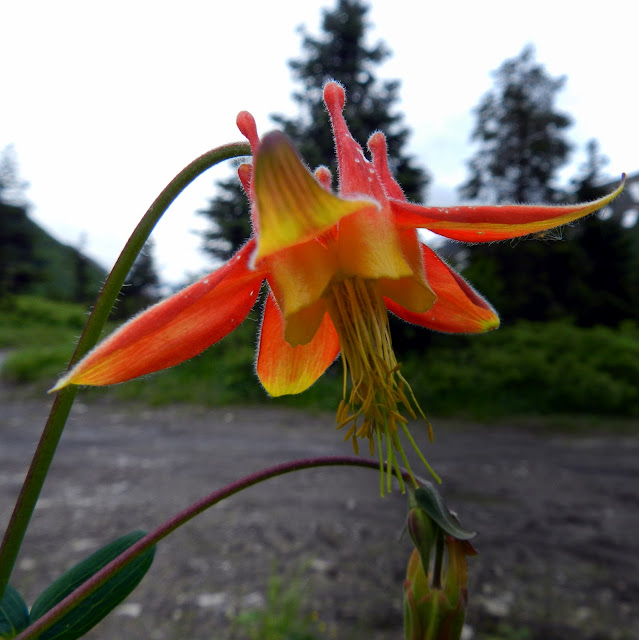 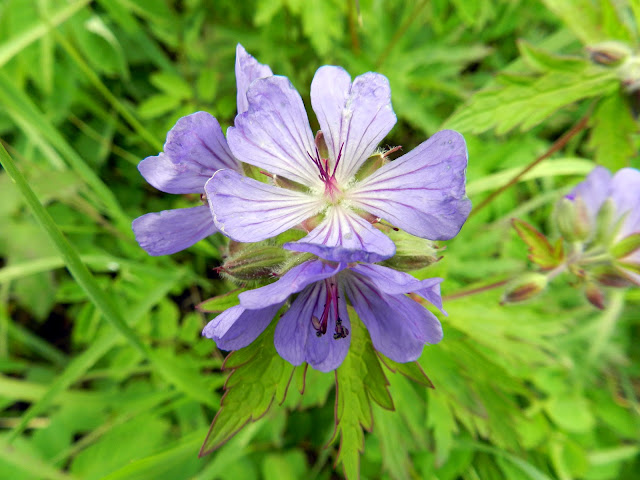 Wild Geranium (Geranium maculatum)
Ok, I know there's more pictures of plants than birds at this point...flowers are just easier to get pictures of! 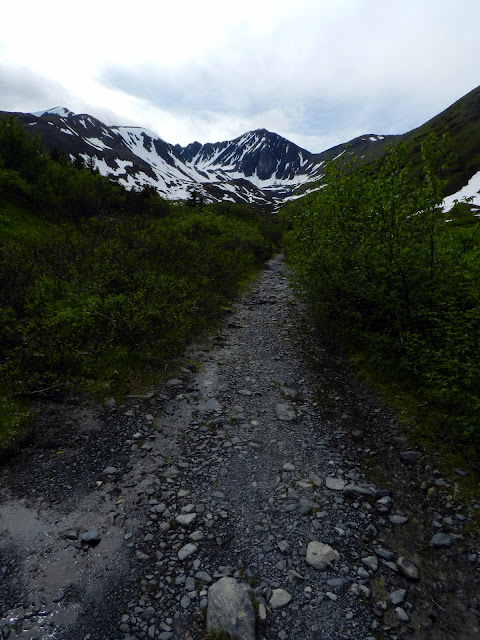 We eventually hit a spot in the road that narrowed, so we had to ditch the cars and hike the rest of the way in. This used to be a road that was used to cart in/out mining gear...and perhaps gold? 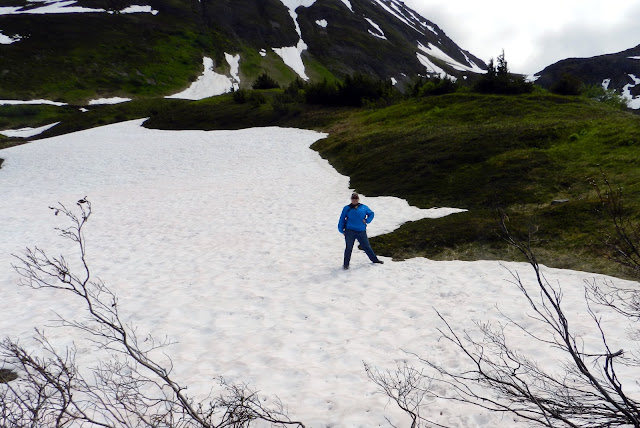 The higher we got in elevation, the more SNOW there was! For my Lower 48 friends, it is July 14th, 2012 in this picture. Yes, I know I'm in Alaska...it's just strange for me to be standing on snow in the summer! 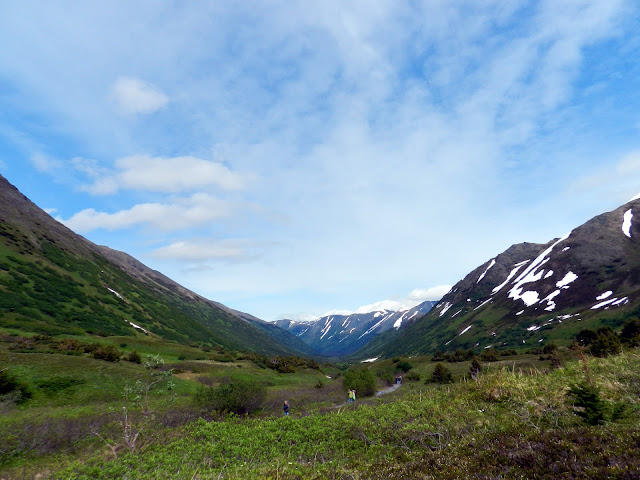 Just as we got to the "bowl" amidst of all these huge mountains, the sky cleared and made for some phenomenal pictures... 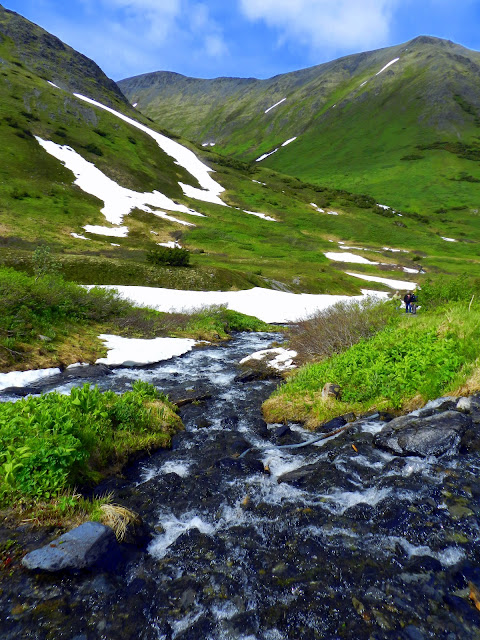 The headwaters of Palmer Creek- ICY cold, and very refreshing! I've never drank directly from "wild water" because I'm scared of getting giardia (beaver fever), but this is so high up and quickly moving...I would be surprised in there are many (if any) contaminants in it. 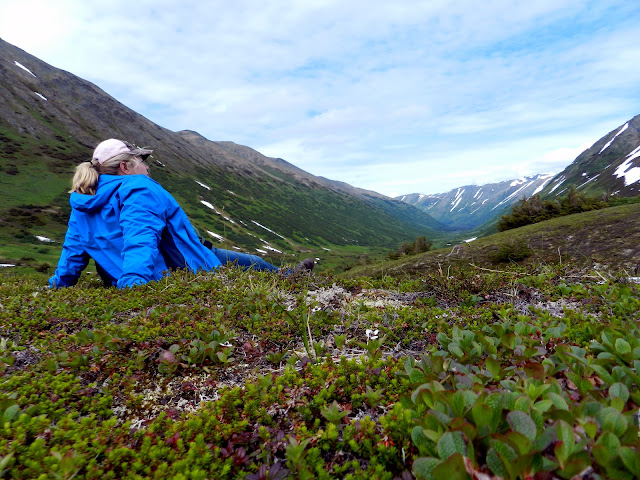 Taking a moment to reflect...
Then I found... 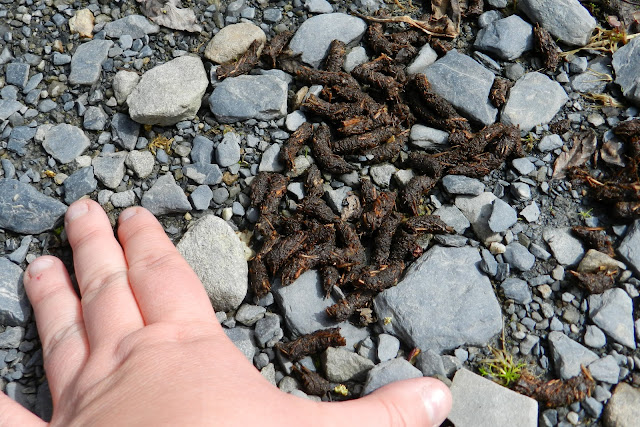 PTARMIGAN SCAT! Not sure if this is Willow or Rock Ptarmigan...but it's a very cool find nonetheless. For some more information about the Ptarmigan check out the Alaska Ptarmigan Facts and Photos web page. 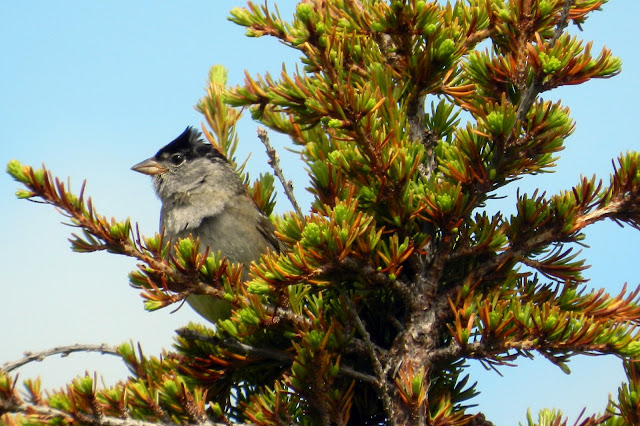 The next bird I was able to get a picture of was this Golden-crowned Sparrow (Zonotrichia atricapilla)... 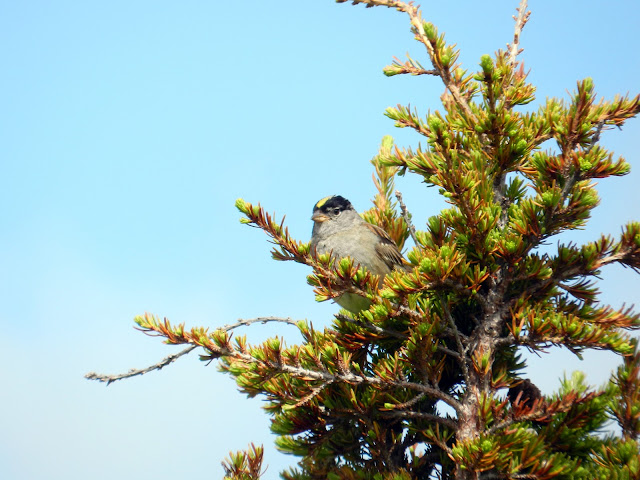 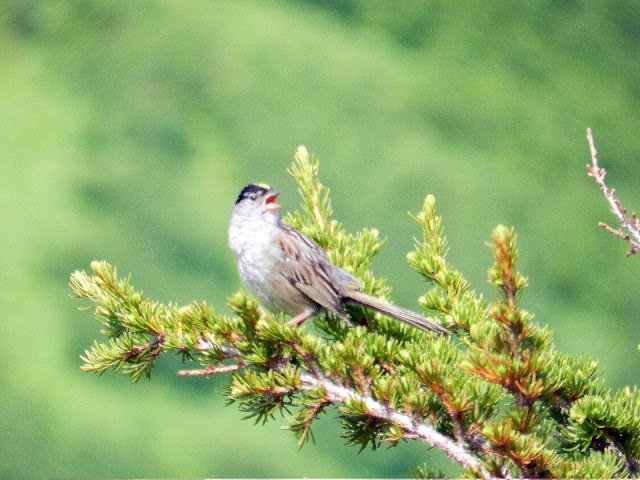 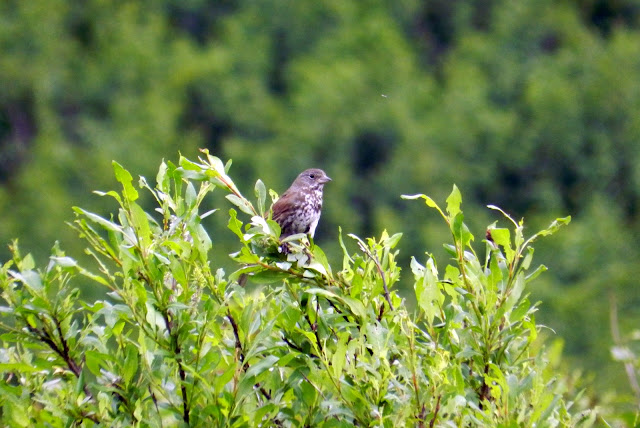 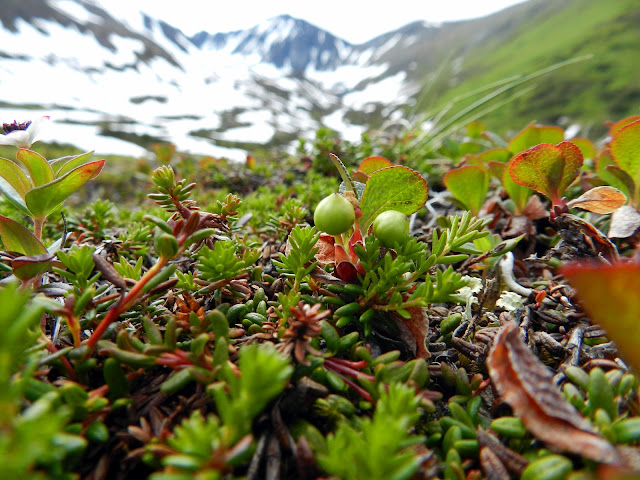 I'm not sure of any of these species of plants...but I wanted to share this picture- I think it's gorgeous!
Below is our final group list of sightings and "hearings"...I didn't see or hear all of these, but I was able to add a bunch of new birds to my "Alaska List" :) 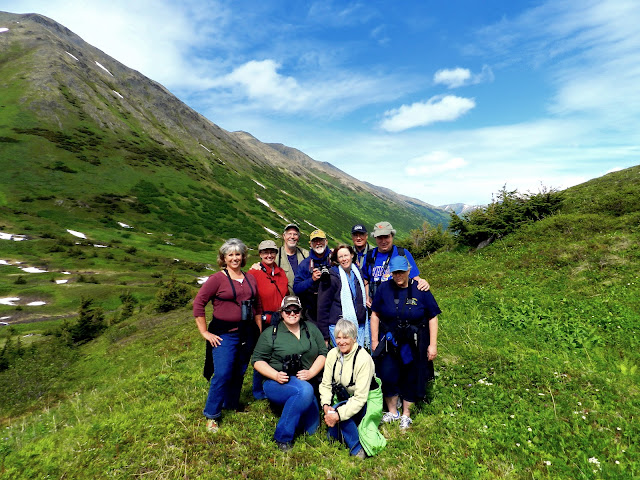 Thanks to the Keen Eye Birders for having me along! It was a great day with knowledgeable people. This will definitely be a favorite memory of mine from Alaska!
Written by: Alyssa Johnson at 7/17/2012 02:51:00 AM Labels: Alaska, Alaska wildflowers, Keen Eye Birding Club, Kenai Peninsula, Palmer Creek, Sibley's