...I couldn't come up with a better title than that, sorry! But that's pretty much what this entry is going to be about in a nutshell.

Before I begin, let me tell you that this is going to be another gory posting, so avert your eyes if you don't like blood.

Over the past few weeks I've gone out with Jim (biological science technician), and Ken (fishery biologst) to track previously tagged lake trout. I'd rather not get into the nitty gritty of that project, so I'll keep it extremely brief: 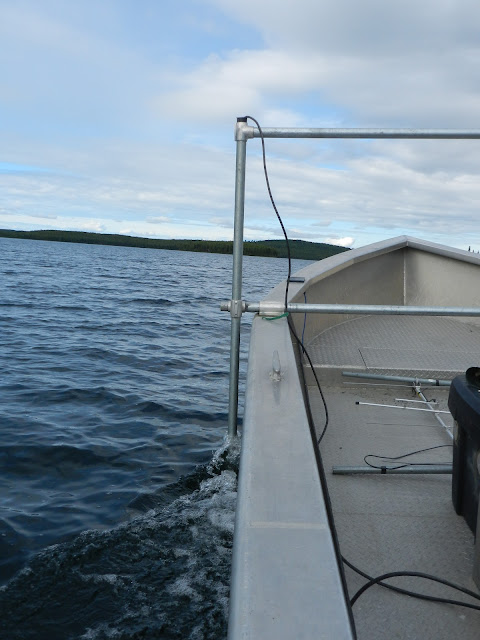 This is looking towards the bow of the tracking boat, and that vertical pipe is the hydrophone, which "hears" or receives the signal. And this is acoustic tracking, for those "in the know". I wish I could do a whole entry about the different methods of tracking fish, but at this point, I'm not learned enough about it all. 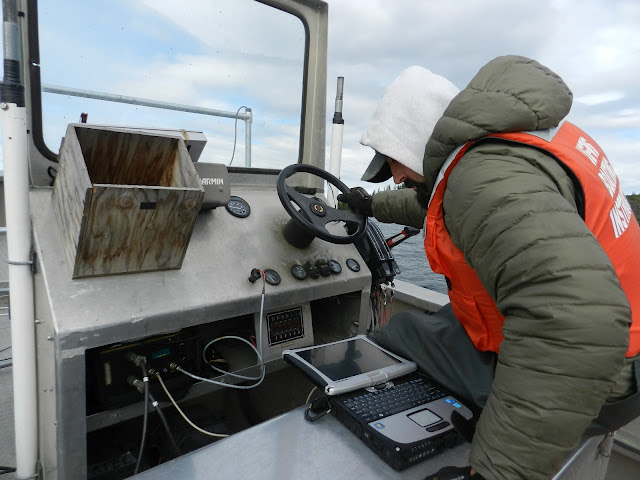 Anyway, here's Ken, watching the software recording the strength of the signal being given off of nearby tagged fish.
Apparently there have been comments from anglers of this lake over the past several years-->decade, that the size and quanity of available lake trout has decreased. Research is being conducted with tagged fish to determine where and when they're spawning. About once a week we go out to track the 13 tagged fish, and also once a week (a different day), we go out fishing for lake trout to tag new fish. 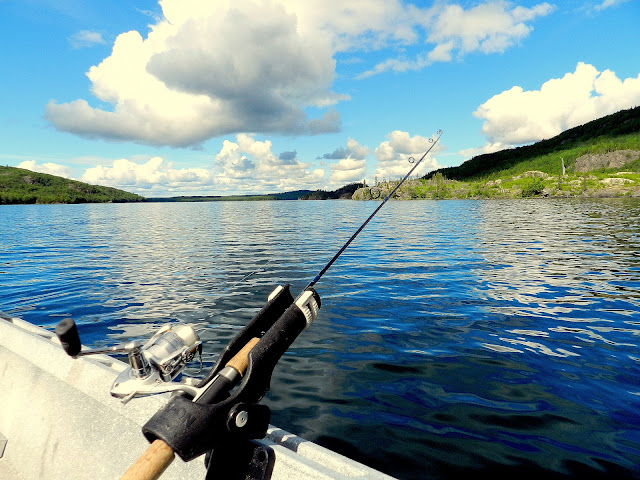 As a side project, kokanee are being collected, if caught, to do some work on determining where the stock is coming from. As the definition above says, kokanee are just land-locked sockeyes, which can and do occur naturally on the Kenai Peninsula. And they even occur in Hidden Lake as well. The confusion is that a kokanee can and will leave the lake system to spawn upstream. Some of the kokanees in Hidden Lake are not leaving. They grow up, spawn in the lake, and then die. The thought is perhaps some of the kokanees found in the lake are hatchery fish. The biologists called hatchery-raised fish "stupid". They do some weird stuff, because they're not wild. They have the intuition to carry out their biological duties, but not the perspective to know when/how/where to do it.

Apparently the kokanees (and other hatchery raised fish) are marked in several ways. In my CON 102 Fish & Wildlife class, we learned that if it has an adipose fin: 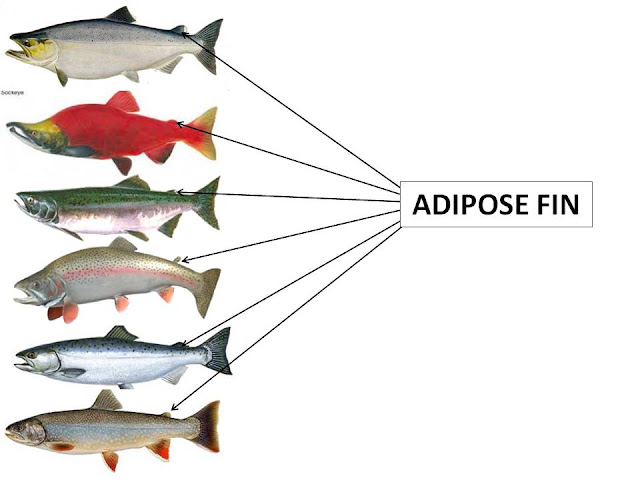 ...it's in the Salmonid family (salmon, trout, char, freshwater whitefish, and graylings). Well, hatchery-raised Salmonids have their adipose fin clipped off when they're very young, so they can be distinguised later in life. The adipose fin seemingly has no purpose, and the fish can manage fine without. Yes, I'm sure it does "hurt" them to a degree to have it clipped off, really removing any part of ones body (unless it's dead tissue), can hurt. But I imagine it's no different than tagging the ear of a bear, or sticking a PIT tag under the skin of a squirrel. It's superficial pain.
The second way they can be marked is to go through some kind of thermo-treatment. I probably should have asked more about this, and I will, before writing this entry. What I understand it to be, is some kind of heating, perhaps infrared, of the fish when they're tiny. Again, this doesn't harm the fish, but it leaves a mark on the otolith. It's kind of like aging the scales- rings and ridges are left on the otolith throughout life.
When a kokanee is caught, it's kept so that the otoliths can be removed, and then determined if it was hatchery released. 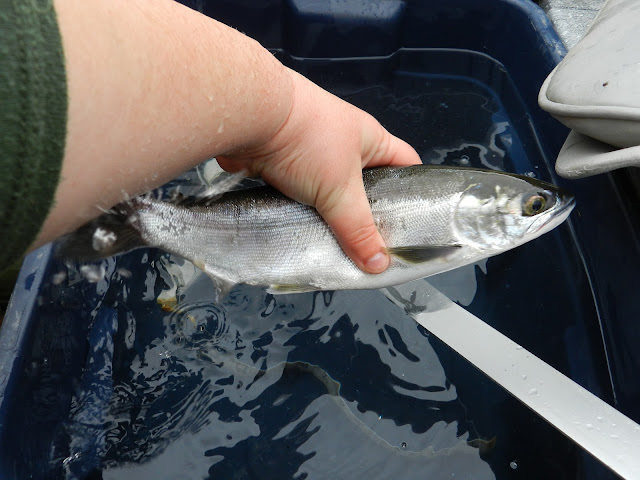 On 6/27/12 we went fishing, and I'm happy to report that I (the NON fish head) caught the only fish :) even if it wasn't the primary target species, it's nice have that small success! This is a kokanee.
Woo! I tried to get through all of that as thoroughly as possible, but quickly...because the removal process is the fun part I ACTUALLY wanted to write about! 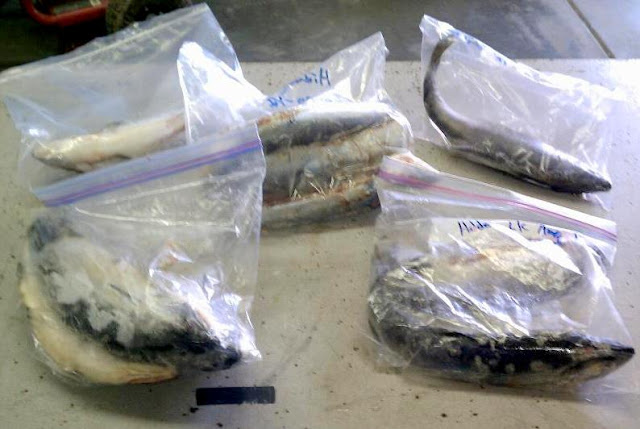 I was charged with the task of otolith removal. I think the biologists thought they were teasing me and giving me something gross I wouldn't LOVE to do...but I actually was really into it. This is the first time I've done a dissection completely by myself, on a semi-fresh specimen. The biology class dissections are always done on 30 year old _____ that have soaked in goodness only knows what chemical. I've also watched the dissection of a fresh river otter, bobcat, and raccoon...which was pretty gross, but interesting.
So I was excited to learn what to do: 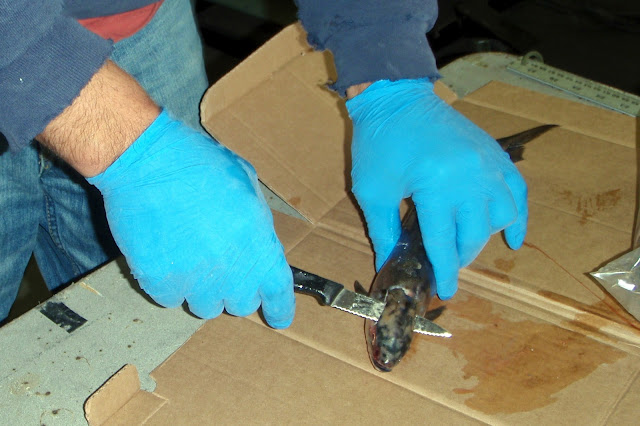 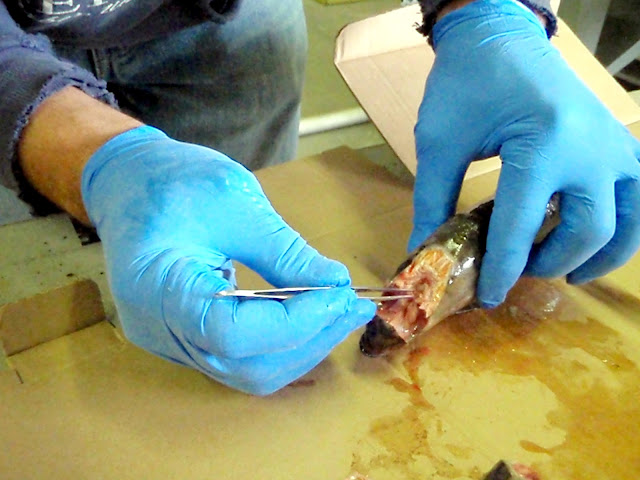 Once the top of the head is removed, the brain must be pulled out. 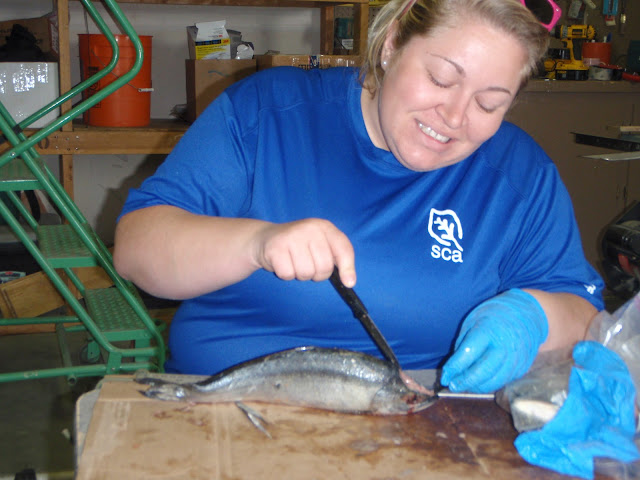 My turn! The fish I'm working on is the same kokanee I caught on Hidden Lake.
After the brain is removed, you have to dig around the cavity with tweezers to feel for these tiny little pieces of bone. The fish were still half frozen, so it was tricky. I'd get a chunk of ice and think I'd gotten the otolith...and it was just ice!
Here they are though: 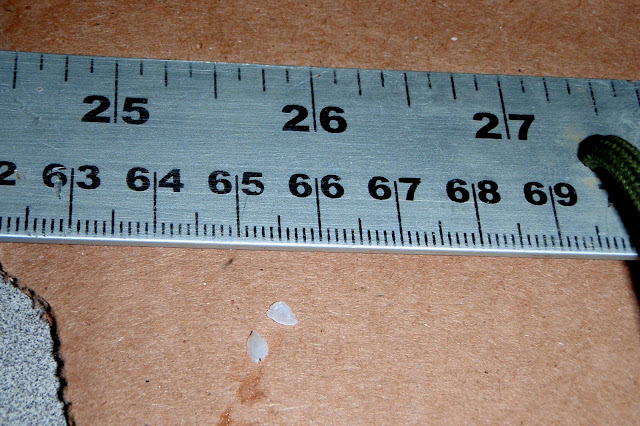 About an 1/8" of an inch wide. Very tricky to maneuver out! 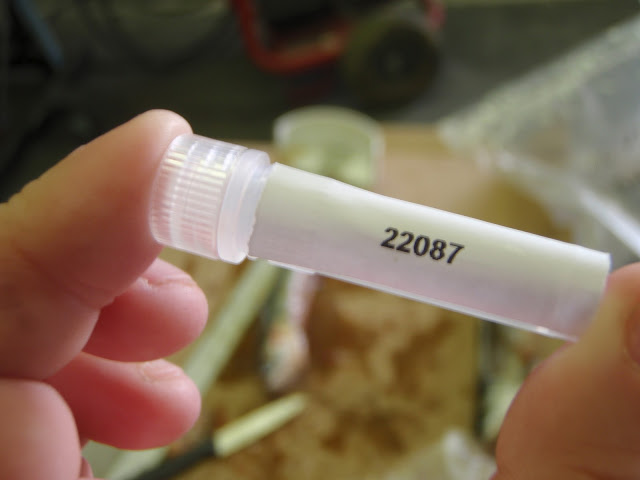 The pair of otoliths are then stored in a vial with the fish's tag number on it. Eventually someone (me?) will look at these otoliths and be able to determine if the fish were released by a hatchery or not.
Tomorrow I'm going birding with an acutal birding club! The "Keen Eye Birders" and I are going out to Hope, AK to search for birds. I'm very excited to be going with people who know what they're doing, and know local birds! Hopefully I'll have some good pictures to share afterwards.
Have a great weekend!
﻿
Written by: Alyssa Johnson at 7/14/2012 03:28:00 AM Labels: Acoustic tracking, Alaska, Hidden Lake, Keen Eye Birding Club, Kenai Peninsula, Kokanee, Lake trout, Otolith, Radio tracking, Sockeye salmon, Student Conservation Association, Telemetry, USFWS