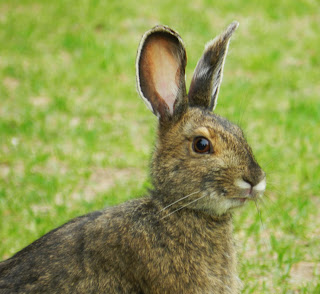 One of my favorite animals here in Alaska are the snowshoe hares. Although pretty common, I think that's why I'm so interested in them: I have ample opportunity to watch them. I see them pretty much nightly hopping (or shall I say...bounding) around the cabins where I live. They're larger than the Eastern cottontails that live in my area of New York, and have longer ears, huge feet...they're just different!

I want to link to my own blog, one of my first entries. Reading through Snowshoe Hares DO Live in NY! makes me laugh. I don't really remember that writer- fairly new to "The Field" she was uncertain of blogging, public writing, sharing thoughts. It's like watching a home movie of yourself as a child- you recognize yourself but no longer resemble that person.

Anyway, I wrote that entry as an assignment for CON 102: Intro to Fish & Wildlife, and John (Backyard Beasts) was my professor for the "wildlife" portion. He encouraged me to write, to write well, and then when I showed interest in the blog he was writing, to start my own. I was not really sure I had much to say, and knew I had to pick a "theme" but couldn't decide. So I started with these portfolio entries of mammal signs and sightings. Since then it's grown into a picture album, journal, scrapbook, memoir, and a great way to keep in touch.

I decided to dedicate a WHOLE entry to the snowshoes because they are pretty dang cool. Such neat physical adaptations to predation and climate, that other similar critters don't exactly share.

When I first got to the Kenai Peninsula in Alaska, it was May 27th. To us "Lower 48ers" that is summer. Memorial Day was upon us, school was out, BBQs had begun...but up here in the Last Frontier, it was probably comparable to mid April in the Northeast. Plants were just budded out, snow capped the mountains (and still does now in July), birds were migrating back, and the snowshoes were losing their white fur. 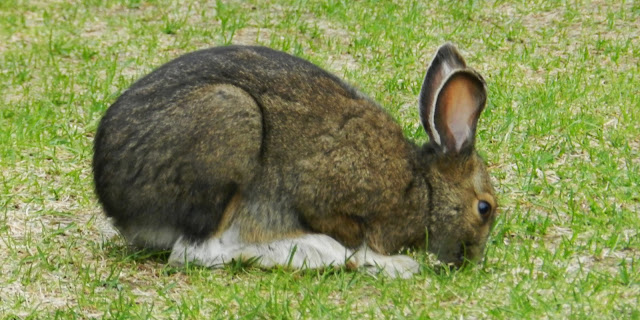 As you can see on this little guy, his toes are still white. The picture at the top is the same hare, and you can see his lips and bits of his ears are still white as well. The "edges" of the rabbit, if you will :)
Snowshoes will start to turn white in I believe mid-late fall. I'm sure that is different between NY and AK, as it gets colder, darker, snowier here sooner than in NY. The hares use that coloration to help them blend into the snowy ground, and interestingly enough, even if it doesn't snow one winter season, they still turn white. This, I'm sure, makes them even more noticeable to predators. I've done a lot of thinking about these types of "season-dependent" behaviors (migration, creating winter cover, caching, etc), and physical changes (fat storage, winter coat growth, fur color change, etc), and I really think the changes occur because of the length of daylight. I wish I could remember the term..."photo___"? I'm sure someone can help me out with this. For example, NY experienced unseasonably warm temperatures and lack of snowfall during the 2011-2012 winter. These hares I'm sure all donned their white digs still because of course they can't predict weather patterns, so they have to turn white. I wonder how this effected their population this year in NY? 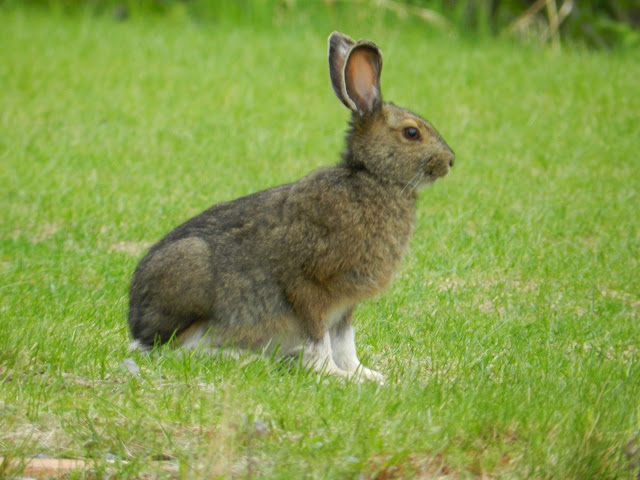 All of the above pictures were taken on May 30th, 2012 to give you a frame of reference, and are of the same hare.
Later that same day, I was searching for a good spot to hang my Cuddeback Attack camera trap. Due to unforeseen issues, I've only gotten ONE picture on that camera.
I was so excited to finally get something, and a species I've never gotten before! There are two snowshoes in this picture, I particularly like the one in the foregrounds stance. He/she is on the move!
The camera has since come back from the Cuddeback Doctor, and I sure hope it's fixed. Half of my time in AK has come and gone, there is wildlife galore here, and if I only come home with 1 picture of hares...I'll be disappointed.
A couple of neat finds: 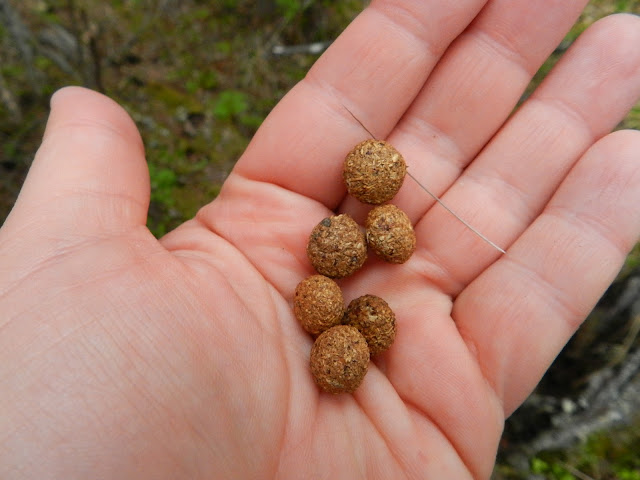 Snowshoe hare scat!
Please excuse the lack of gloves. I USUALLY do not handle scat A) at all and B) with bare hands. But snowshoe hares are herbivores, and their pellets were just sawdust. I will say though, handling scat is unsanitary, and I did wash my hands :)
Now if you thought that was unsanitary... haha... 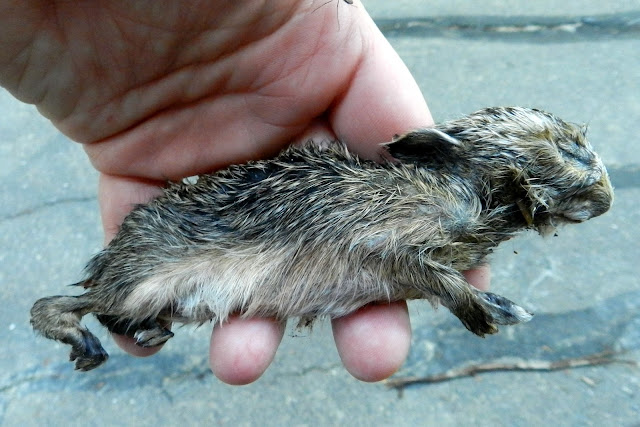 This is a dead baby snowshoe hare. I'm not sure why it died, or how it died. I did not notice any wounds or sign of trauma. This picture was taken June 7th, 2012- and I estimate this hare to be several days old. It appears like it was able to move around, and its eyes had opened.
I wonder when cottontail babies are born in NY?
Then I found this on July 1st, 2012: 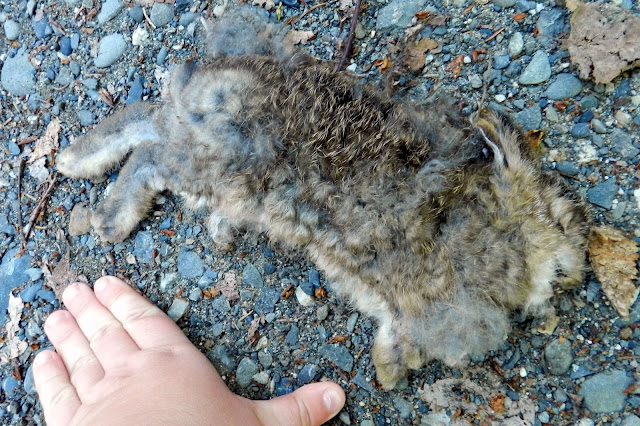 Another young hare. This one was kind of "yucky"... on the other side it was bloody, but I couldn't tell what the wound was from. This was found on the path in front of our cabins, it showed up overnight, and laid there for a couple of days. It's gone now, a week later. 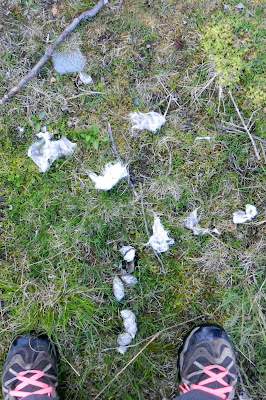 Typically when I see hares, they're alive and kicking like the top photos, or like at right: tufts of fur that is evidence of predation.

There aren't as many scavengers here as in NY. There aren't any skunks, raccoon, opossum... there are bears, but right now they're on the rivers fishing for salmon! I don't think they immdiately live around here anyway, we'd definitely notice them. A hare is not a really a meal for them either I don't think.

The animals that DO eat hares are lynx, wolverine, wolves, coyote, red fox..but they actively hunt them. This is not to say they won't eat carrion, but they are less inclined to do so. When given the chance (and there is plenty of chance), they'd take a live, fresh hare. So this still leaves me wondering how those young ones died, and who carried off their bodies?

I wanted to put one in front of my camera trap!

I do suppose though, a bird could have flown off with it. There are a lot of crows, ravens, gulls...all of which I'm sure are keen on an easy (disgusting) meal.
I still have more to say about these hares, but it is getting late, and I've written more than I had anticipated in this entry. Perhaps I will come across a dead adult and be able to take some neat pics of their feet- which have adapted really well to life in the snow!
As I end for the evening, I wanted to share one of the most bad-ass critters I've seen yet. I don't have photographic proof, it all happened too fast. But my roommate WAS with me, and she can vouch for our sighting: a wolverine!
Written by: Alyssa Johnson at 7/06/2012 01:50:00 AM Labels: Alaska, camera trap, Cuddeback Attack, Eastern cottontail, John Van Niel, Kenai Peninsula, Snowshoe hare, wolverine