Earlier this week we had a very rainy, miserable day, and temps barely topped 50 degrees. After going out the the Funny River to check the weir, and getting thoroughly soaked, I was offered the chance to sit in the office for the rest of the afternoon and learn to age fish scales. I jumped at this, not just to get out of the weather, but because I'm interested in checking out scales a bit closer.

In the Wetland Mammals class I took a couple of years ago, we found otter scat and rinsed it out so that we just had the hard bits left over. We attempted to ID the species of fish that the otter had been eating by looking at the scales. It's tedious and difficult...and as I remember, we were not successful in IDing the species.

Anyway, when I had the chance to do this again,  I was interested to actually LEARN what I'm looking at rather than just trying to compare an itty-bitty scale to a picture in a book. 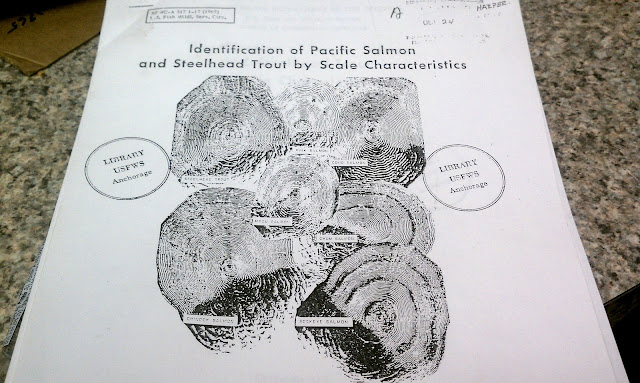 I got kind of a crash course in aging scales, but this paper is very comprehensive. If you're a Fish Head, you should read it. Not only comprehesive, but written fairly "layman", so it's easy to understand. Sometimes these things are written with ONLY peers in mind, and that's not always the audience.

This is a scale card. It's kind of sticky once it gets wet, and the scales stick to it pretty well. The way it's organized is from right to left, top to bottom. SO, fish #1 that we sample goes from 1 down to 31. We take 4 scales/fish. Not sure WHY it's done this way, there's got to be a reason. Seems too odd to not have a reason. These were not the scales I would be learning to age from though. These still needed to be pressed into acetate making a permanent, hard record of the scales. 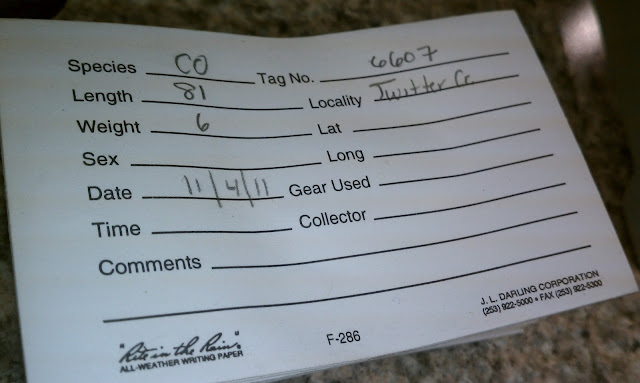 The scales I was to abe ging were in these little envelopes. 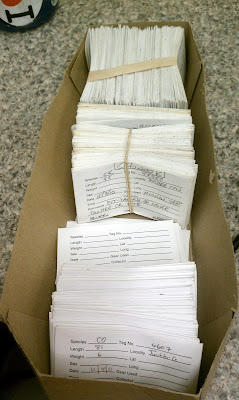 Not sure how many are in here...but way more than is considered "fun"...Also, the scales in these envelopes are no where near the size on the above card. Those scales, to give a frame of reference, are like the size of a pencil eraser. Below are the size of the scales I was working with. 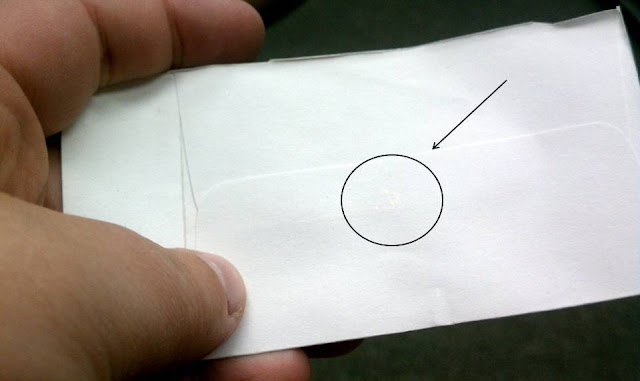 Can you see them? I circled them because otherwise I don't think you'd be able to see them. They are tiny, and also very silvery/translucent. These scales came from coho and chinook smolts, which were probably finger-length, if that. And I realize that you probably can't see the scales too well, but I didn't want to write this post without sharing HOW small they are. 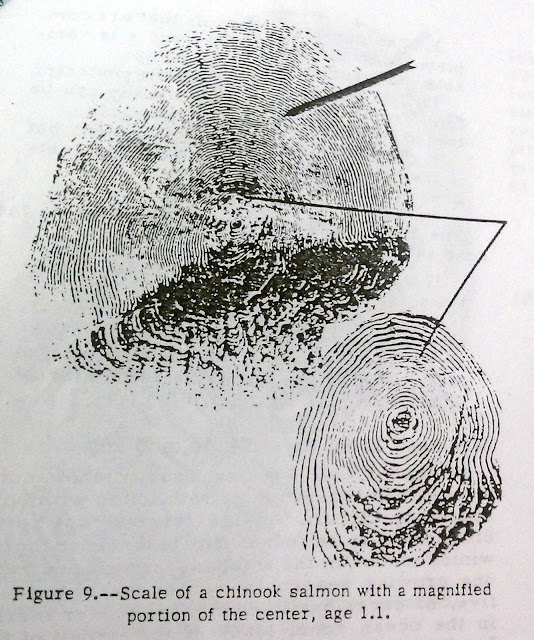 So what I was looking for was to determine if these fish were "0" in age (hatched that year, haven't had a chance to add a annuli ring), or a "1" year old in age (between 1 full year and 2 years of age). All of those rings you see above are not annuli, but circuli. Annuli rings are added on after a year, and are a bit more pronounced than the others. The image above points this out with an arrow, although to me, they all look the same in these drawings. Actually looking at the scales under the dissection scope seemed (or maybe I thought I was doing better than I actually was...) to be easier to pick out. 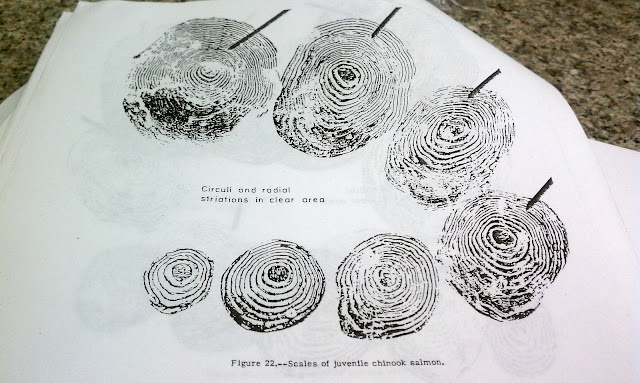 All of these fish have yet to live in salt water, they've just been hanging out in the rocks and vegetation eating inverts and growing.  At the same time of the scales being taken, they were also implanted with a PIT tag.
I'd speak more on that above, if I had enough information to explain with. Simply, I assume half of you that are reading have worked with these tags in the field, and need little explanation. The other half of you, you know those little microchips your vet can put in the cat/dog? Same thing! The tag is actually about the size of a grain of rice- it's very, very small.
I may have the opportunity to implant some in fish later this season, and of course if that happens I'll be sure to share. 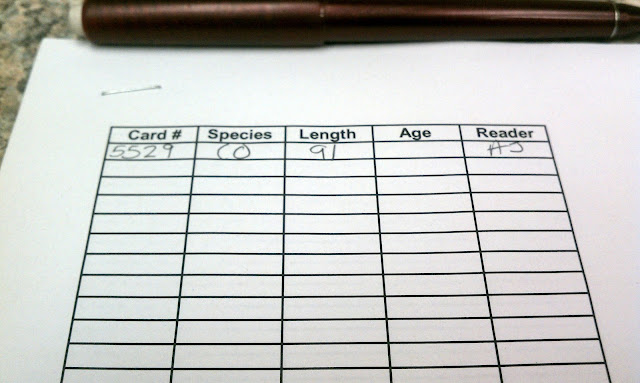 And this is the data sheet I was recording the ages on. That length is in milimeters, just to give you an idea. Above I said finger-length and 91mm is long, but that was one of the larger fish that I recorded.
I sat here for 3 hours or so, staring at these little scales, through a microscope. When I walked out of work that day, I could barely see straight. I've always had an issue looking through binoculars and microscopes, even though I have 20/20 vision. I'm not sure if that's me misusing the equipment or truly having an issue. Regardless, it was interesting to do, just will remember to take breaks next time.
I have a few blog entries in mind to write soon, and I wanted to share a picture of what was going on outside my window as I was writing this. I would like to write a full entry on these guys eventually.

Common Raven (Corvus corax)
There was a group of 4-5 Ravens hopping around the tree tops squawking very loudly...not sure what was going on but it disturbed me enough to go out on the porch and look for them!