Last week I posted an entry entitled: The bad with the good... you should read that entry first before this one so you're caught up to speed.

Today I spoke with Alaska Wildlife State Trooper Potter in Fairbanks. He was the responding officer to the incident regarding the bear I watched be dispatched. I was eager to speak with him, for no other reason than to understand the laws surrounding this situation.

He told me that the owner of the hostel was in fact given a citation for taking a bear out of season. I don't really understand this, and I think this was a case of  "there's no law that fits this specifically, so we'll cram it under one that's close"...does that happen?

So the owner of the hostel took the bear out of season. But there's an open season on black bears in that region, YET, the owner didn't have a valid hunting license. The owner was claiming a Defense of Life and/or Property ("DLP")  shooting was necessary. But his unsecured garbage receptacles don't qualify him to use that claim. And if he HAD a a valid license, shooting that bear IN the dumpster would have been legal. Kind of- it could have been considered shooting over bait. There is also no law that requires bear proofing... and business/private owners can not be held accountable for allowing bears free access to food/garbage.

So, he's paying a $250 fine. Unless of course he wants to contest it, then he goes to court, and I get called to testify. I have that video I mentioned in the previous entry, so there's really no question about what happened. He'll probably just pay it off to make it go away.

He did not get to keep the bear. The skin and skull are going to the state, the skin will be tanned and auctioned off. The meat went probably to a local food bank.

So, I don't really feel like this bear killed legally or good cause. There's nothing left I can do, other than write my letter to the BBB and urge the owner of the hostel to rethink his food and garbage storage before something more tragic happens.

The last thing the officer told me: "There are a gazillion [yes he said gazillion] black bears in Alaska, so try not to worry about it."

Why am I having such a hard time with this? 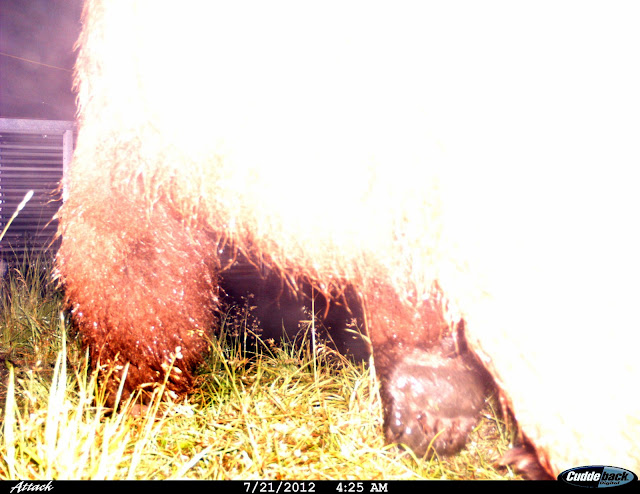 That's a grizzly bear, folks! (Ursus arctos)
To the left of it is the trap that I work in often. The picture is really washed out because the bear is so close to the camera. The Attack flashes really bright, so there is some over exposure...but still awesome!
Below is a picture in the day time... 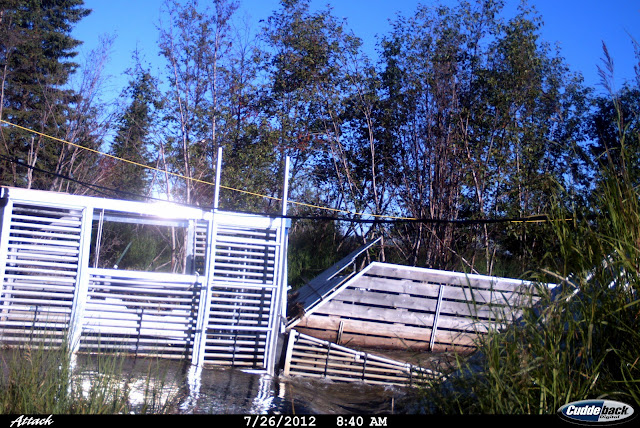 And that's all she wrote for today. Next entry will be the continuing story of critters in Denali!
Written by: Alyssa Johnson at 7/31/2012 03:27:00 AM Labels: Alaska, Black bear, Brown bear, camera trap, Cuddeback Attack, Defense of Life and Property, Denali National Park and Preserve, Fish weir, Funny River, Grizzly bear