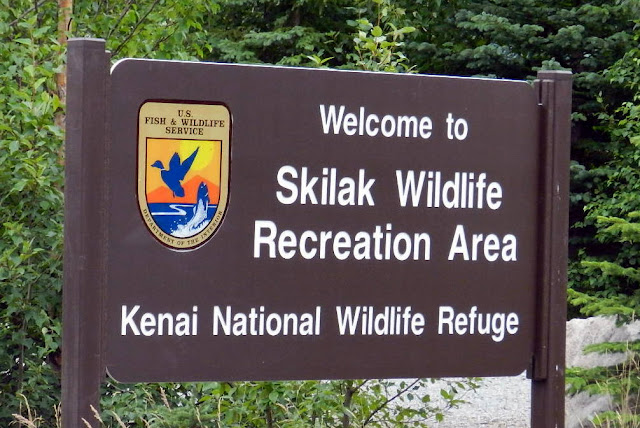 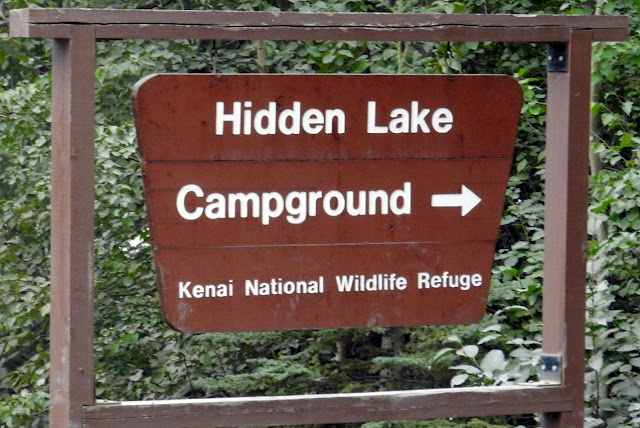 To see another entry I wrote about this project, see: Tracking Hidden Lake & Kokanee Otolith Removal. 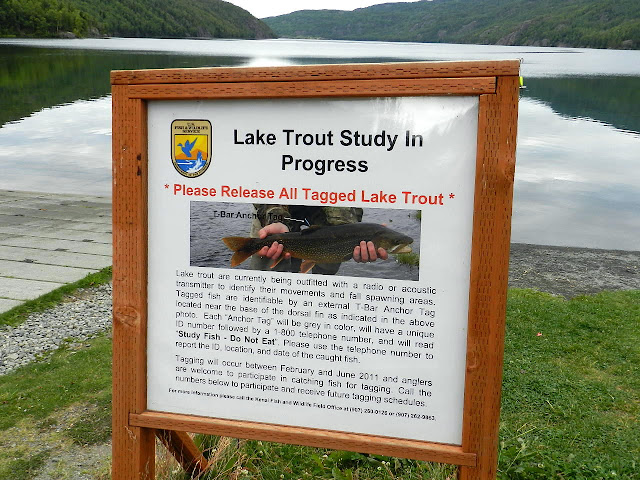 Hidden Lake has been historically sport-fished for lake trout, and apparently over the last 'X' number of years, there have been complaints by anglers that the fishing is drying up. So, the task has been given to the biologists out of this office to do some research and try to get a population estimate, and also where the trout are hanging out throughout the year, specifically during the fall spawning season. 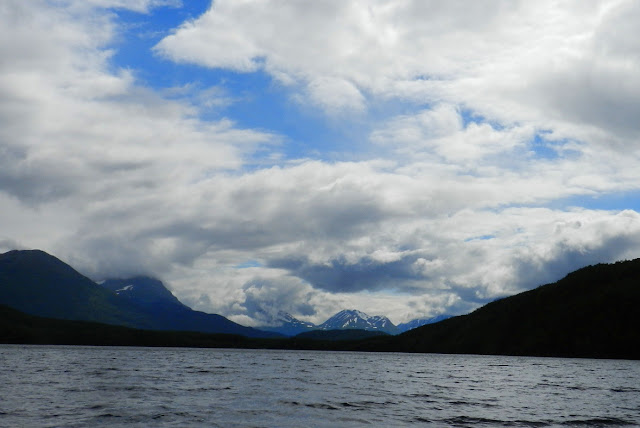 During this entry, I'm going to share this project and what I literally get paid to do.

My last few days of work this week consisted of heading to Hidden Lake, which is about an hour from our office, loading gear into a boat, and going fishing. All lake trout that were caught had measurements taken, and some had acoustic tags surgically implanted.

Our days began at 5 am at the office, which is early for me. As the boys I work with learned, this girl is NOT a morning person. But, I had an hour drive to wake up and prepare myself. After unloading the boat and finally getting on the water it was around 6:30 each morning...and we had a gorgeous morning on Thursday (8/15/2012)... 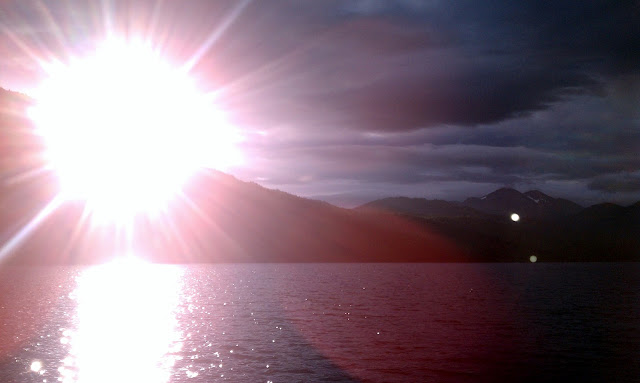 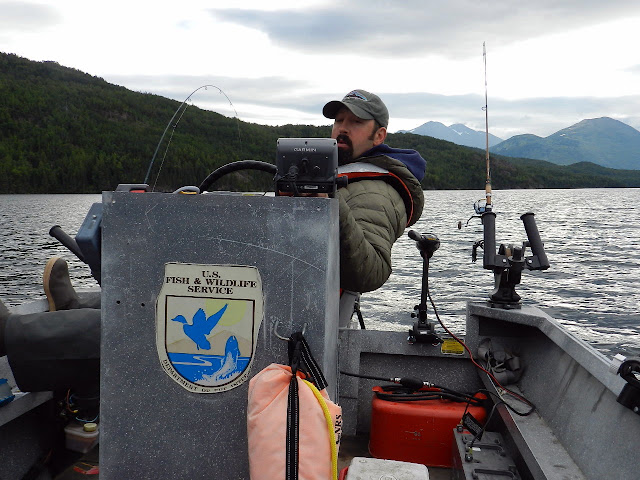 Captain Ken manning the helm and watching the fish finder... 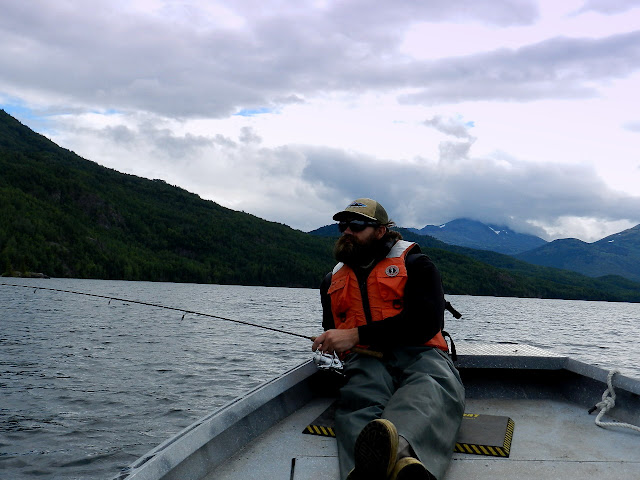 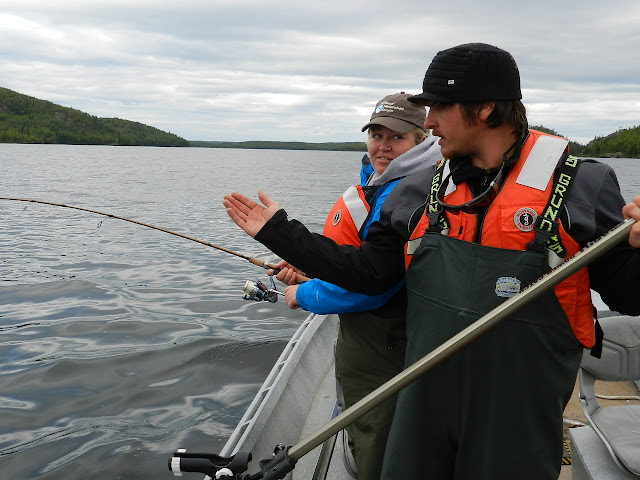 And Kevin teaching me how to "reel down"... 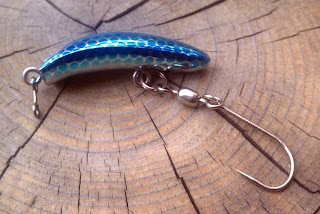 ﻿﻿﻿﻿﻿﻿So not to be immodest, but before a series of unfortunate events (which I will eventually get to), I was whooping butt on the fish catching. Ken gave me several options of lures, and I picked the "pretty" one, since I have no idea what works and doesn't. Well, apparently pretty worked!!! I chose a single-hook, blue/silver, KwikFish lure. And the fishing was hot! I have to give credit to Ken for figuring out where the fish were hanging out, and guiding me...but I caught 4 nice lake trout that day that I was pretty proud of! 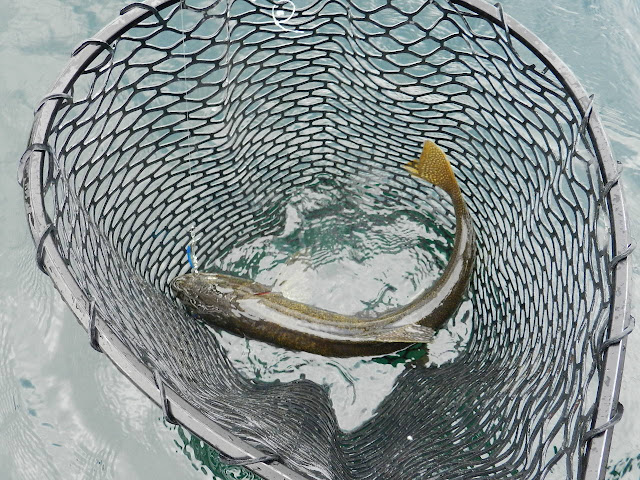 As this was my first lake trout, they initiated me into the "club"...and strongly urged that I kiss my fish!

I'm an "instant gratification" type of person, one who enjoys seeing a tangible result of effort. So, catching fish when they're biting is really satisfying!

If we caught a female, she would get processed on board the boat. We were only tagging healthy males, and the reason being apparently females can/will skip spawning some years. The biologists are really interested in knowing where the lake trout are spawning in Hidden Lake, so tagging a non-spawning female would be a waste of time, effort, equipment, and stress on the fish.

We'd fill a tote with lake water, and that was the holding tank for the fish. We'd try to keep them in the water as much as possible to lessen the effects of being handled. 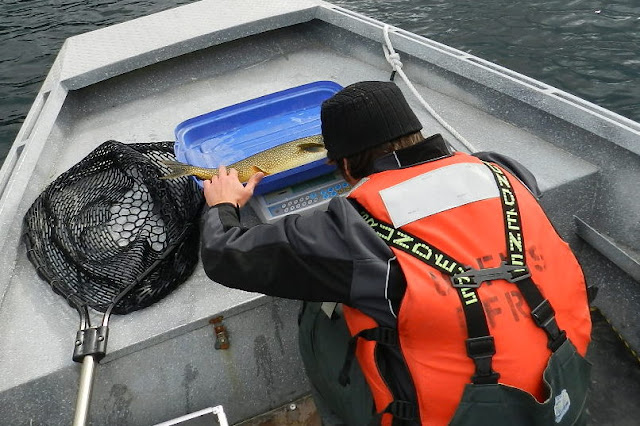 All of that would take about 5 minutes, with each of us with a "job". Getting the fish in/out of the boat as fast as possible, safely, was key. Of course handling a wild animal always causes some amount of stress and damage, but it's a necessary cost to be able to study and learn.

When one of us caught a male, the protocol was a bit different. We had the processing station set up on an island, as there was too much stuff and not enough room on the boat. 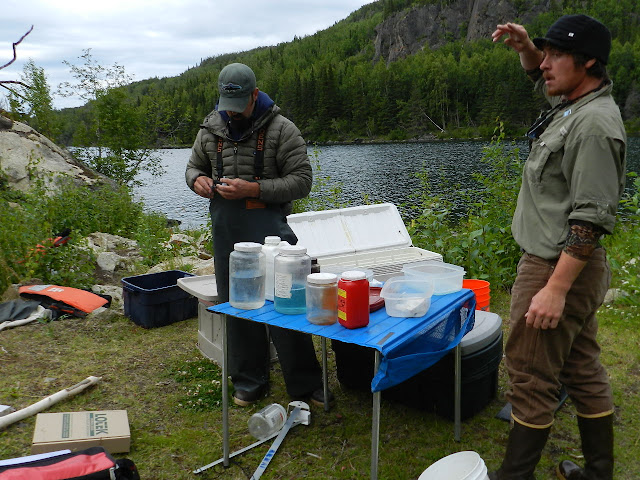 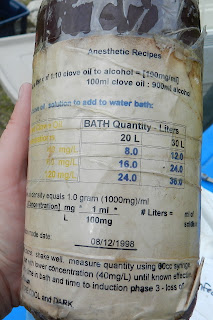 The fish that were deemed healthy enough and of course male, were brought to this spot in their tote, and then were subjected to a bit more than the females.

The same set of measurements were taken (FL, TL, girth, weight), but the fish were also anesthetized to render them still and I'm sure ease the pain of the implant.

A solution of mainly clove oil and water was used, and then the fish was placed in that for a few minutes for it to take effect. The whole thing was really interesting to watch. I couldn't really help, other than take down data, so I was able to really pay attention to the whole procedure. I admire Ken's ethic and attention to detail. He has a protocol, assigned us all a task, and the whole effort moved smoothly. I'm reassured that my personal need for this type of organization and control is necessary. 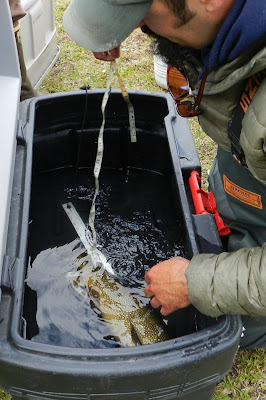 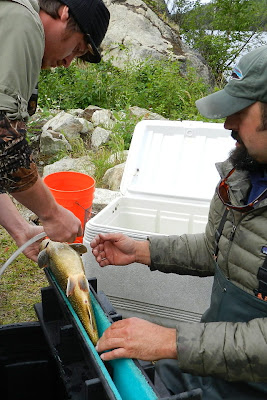 After measurements were taken, the fish was then implanted with the Lotek acoustic tag. 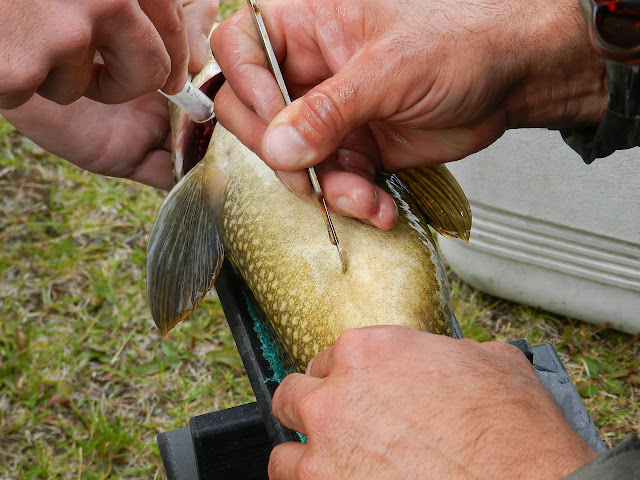 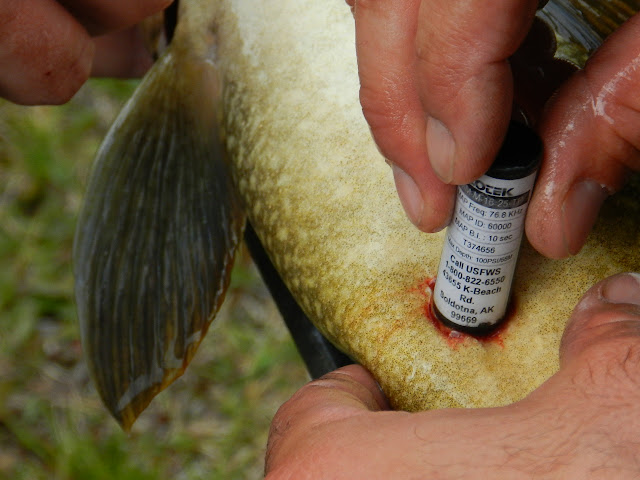 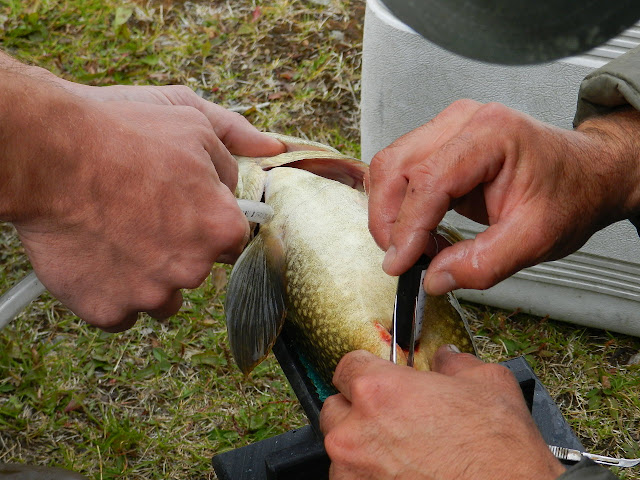 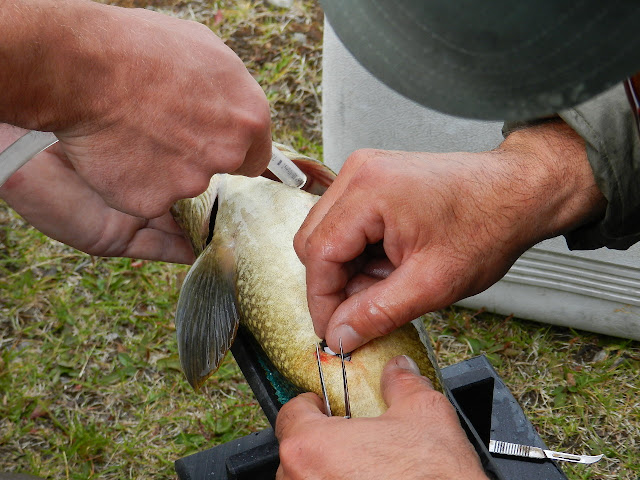 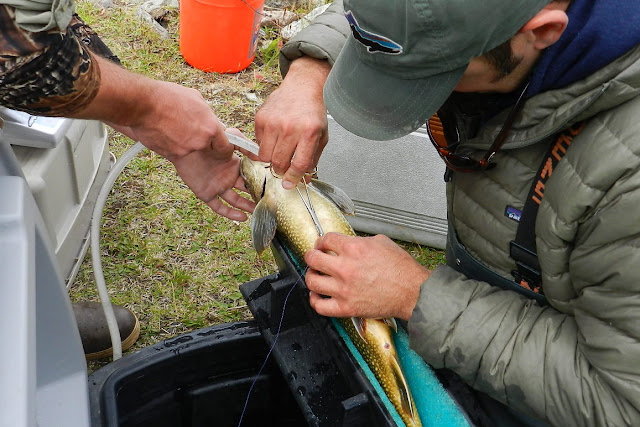 Then Ken stitched the incision back up, and applied a kind of "super glue" to keep the suture knots tight. The thread will eventually dissolve. 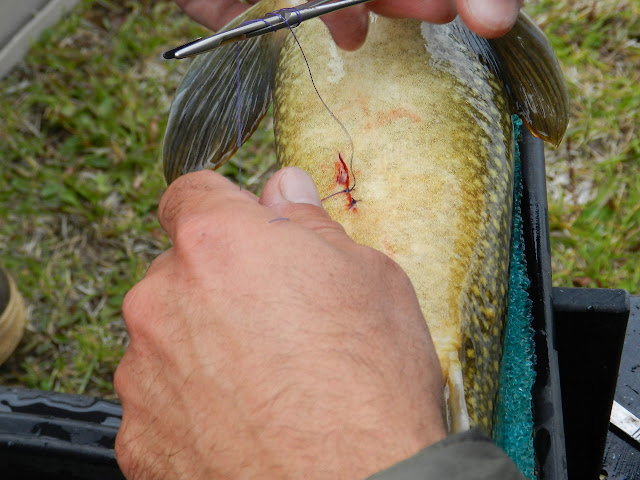 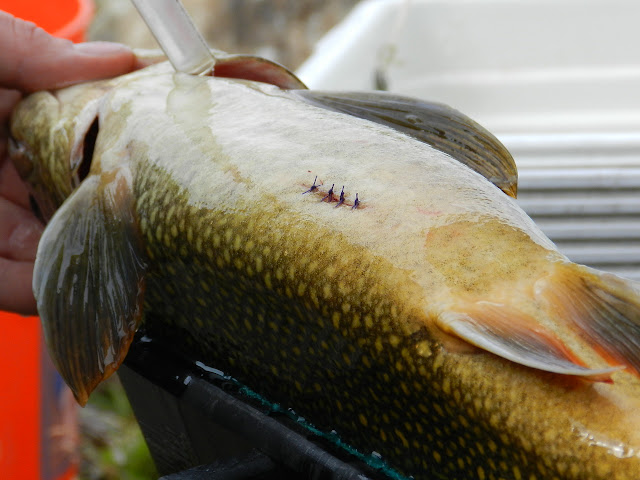 After all of this, the fish was moved to the "recovery" cooler, filled with fresh water, and was given probably between 5-10 minutes to come to. 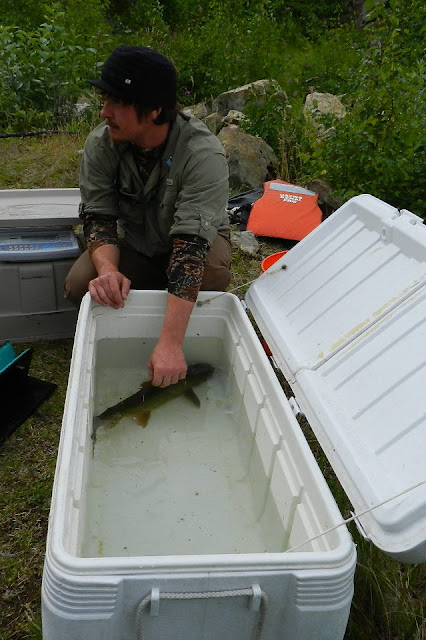 The last piece was to get the fish some final bling-bling. The fish would get one of these placed near it's dorsal fin, and the gray part is outside of the fish, so it can be visually identified by us, or another angler if it's caught. 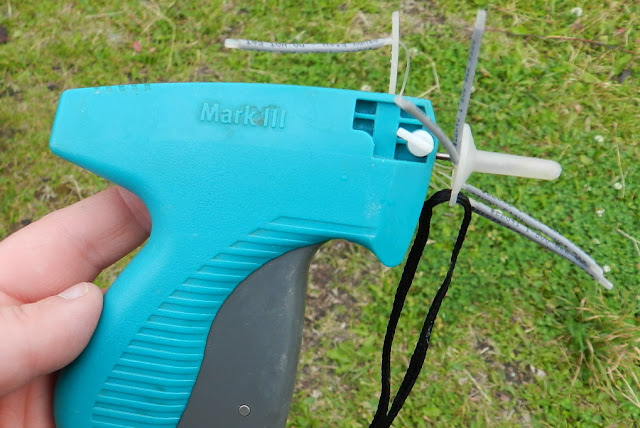 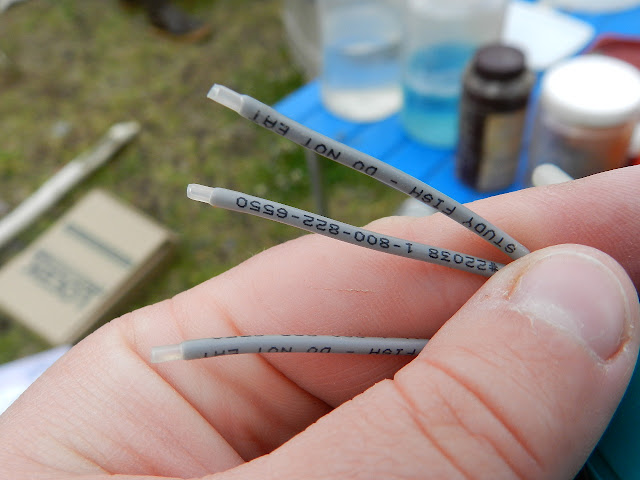 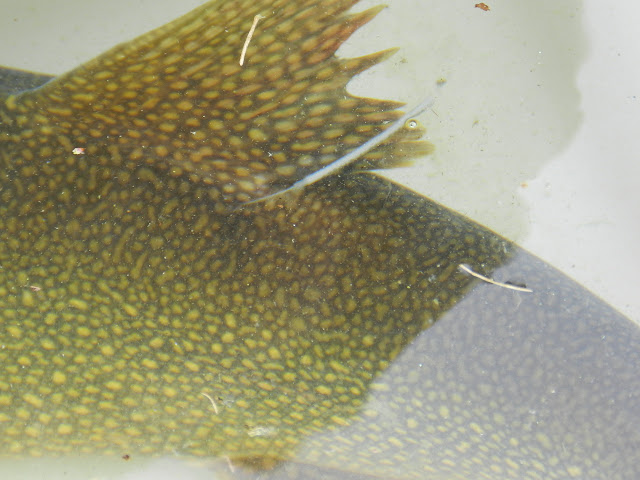 The "Series of Unfortunate Events" that I mentioned earlier HAD to be shared on my blog, as they will make tagging lake trout forever memorable to me.

On our second morning, there was less down time for us. We knew exactly where the fish were hanging out, what lures were working, and we got to business. Within 5 minutes, I had a nice male on my line. We brought him in, and proceeded to implant him with the monitoring devices. When we were back on the water, and the fish was revived, Ken asked for someone to release the fish.

Lucas started to lift the tote, but I jumped in and wanted to release "my fish" back to the wild.

The tote had more water in it than I expected, and when I lifted it over the side of the boat to dump, it quickly filled with lake water and pulled me off the boat.

I fell OFF the boat!

Who does that?! I've taken the NYS Boating Safety Course, and the Department of the Interior's Motorboat Operator's Certification Course, American Red Cross life guarding courses...and grown up in/around water. And I fell off the boat! In the middle of the lake, fully clothed and in rain gear/boots too. I was wearing a life jacket though, and popped right up and stared at the guys in the boat in complete disbelief that I was no longer in the boat. It was like slow-motion too, as I was dumping the tote, I said out loud "Haha, I'm sooo going to fall off this boat!". And then I did.

After a beat, I was offered help (amongst much laughing), and I denied it opting to swim to shore instead. It wasn't that far and I was so beyond mad at myself I needed to cool down (literally, figuratively). The water was in the low 50's and the air temp maybe in the high 50's, low 60's, so it was breath-taking, but not immediately debilitating. Many thanks to coworker, Lucas, for acting quick to capture the following moments forever...

I think Ken was in disbelief that I wasn't accepting his offered help!
I was SO mad at this moment, but now that I'm reliving it through pictures, I'm cracking up!


No harm, no foul! A great way to end the season and my work time here in Alaska!