I've not had a really good gray fox (Urocyon cinereoargenteus) sighting before, except the sighting mentioned in this entry: A *NEW* Camera Trapped Species back in the spring of 2012, while I was visiting the Outer Banks in North Carolina.

These little canines intrigue me, because they are so cat-like and small!

This past weekend, I was back in Western, NY visiting my parents for the weekend. My mom and I were driving to a nearby apple orchard to get cider and apples and something caught my eye on the side of the road. In mid-sentence, I asked my mom to stop and pull over, so I could go look. She rolled her eyes, but stopped the car and let me run back and look.... 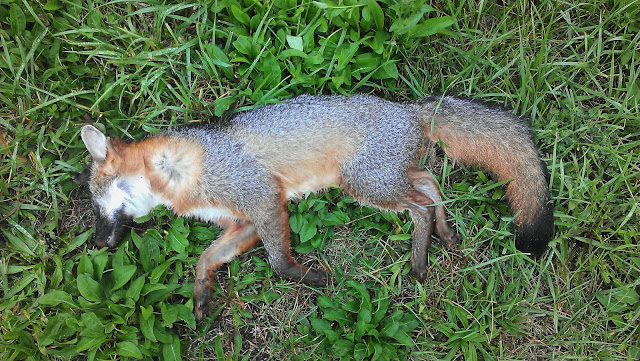 This beautiful (young, female) gray fox had recently been struck by a vehicle. 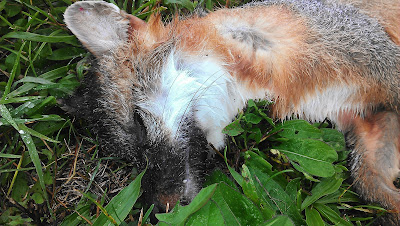 I looked her over really quickly, and determined that I wanted to take it to study it a bit closer later, and not on the side of the road in the pouring rain. So, my mother let me put it in a shopping bag, and allowed me to take it back to their house to properly bag and freeze it. It's now in a freezer in the taxidermy lab at SUNY Cobleskill, where I'm a student, until I can properly do something with it. That will probably be another entry though...
For now, I want to address the gray fox's feet:
As a mentioned above, they are so cat-like. I distinctly remember learning in the Intro to Fish and Wildlife class I took at FLCC, that the gray fox have semi-retractable nails. Other canids (red fox, coyotes, wolves, domestic dogs) can not retract their claws, but all cats can fully retract them. Sometimes tracks left behind by the gray fox don't have nails that show, since they can retract them! The gray foxes have also been known to CLIMB trees, which totally astounds me! Elbroch (Mammal Tracks & Sign) says they may even BED above ground in a shrub or tree!

Check out Blazin' Trailblazer's Climbing Canine entry for some great pictures of a gray fox climbing... 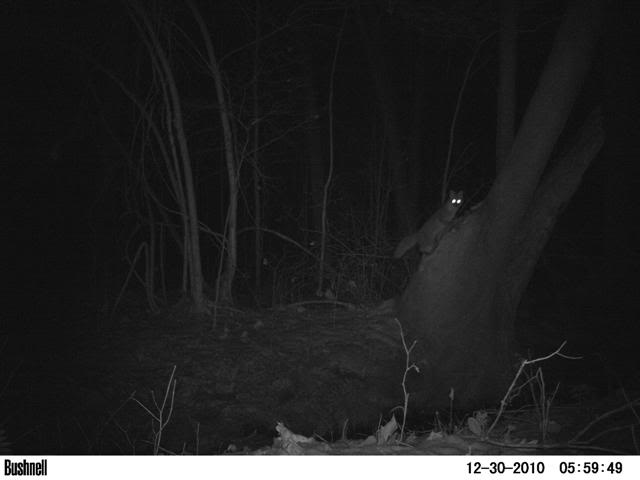 ...and Nature of a Man's Lazy Willow entry for some MORE great pictures...super cool! 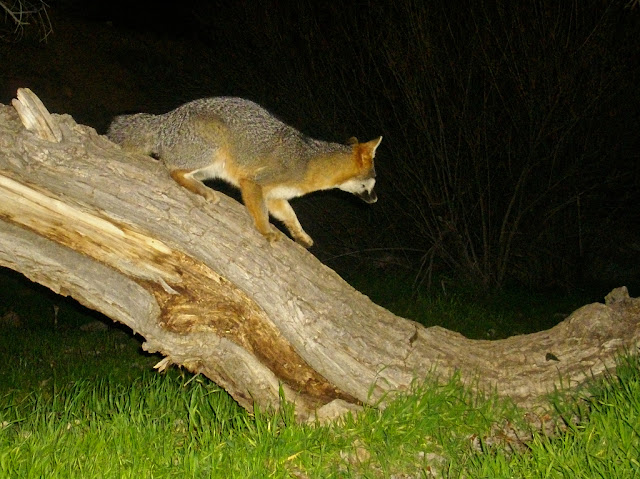 Maybe I can catch a GF scaling a tree too someday...


Gray fox feet are very small, comparitively to other dogs. I think of a red fox, and I think of a small dog. Grays, for some reason, seem to be less ...observable. I was going to say less common, but I don't know if that is the case. They seem a bit more skittish than the reds, except for that one I saw in North Carolina. Many people have a harder time envisioning how big a gray fox is.

Here are some sizes for comparison:

A pet cat could easily be the same size or larger than a gray fox. Here are some paw pictures I took for comparison. 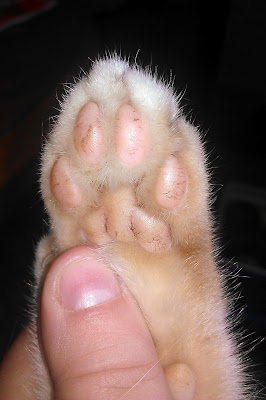 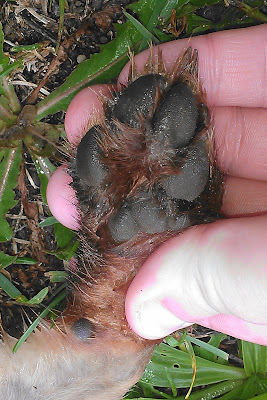 My pet cat, Sassy's paw on the left.
Gray fox paw on the right.
You can see that the toe pads on the fox are relatively larger than that of Sassy's, but the overall outline/size of the paws is similar, especially if seen by a rookie like myself. Tracking is difficult, and animals with tracks so similar to each other as domestic cat and gray fox. Dogs typically have an "oval" shape to them, and cats "round", but in smudgy imperfect snow or mud...it can be hard to decipher.
There are some differences though, and I found this neat website with the breakdown of the minutia between dog and cat tracks: Canine vs. Feline.

Also, notice that nub of a toe that each critter has further up the leg. That's the heel pad, and it often doesn't register...but it can, especially in a deep substrate. This can only further confuse things between the two species...

According to Elbroch, measurements are as follows for domestic cat and gray fox tracks:


Finally, I have to share a final few pictures. After being away from where I live in East/Central NY, where I've moved for school, for the weekend...I anxiously checked my camera trap that I have rigged up when I got back. I could not believe the results: 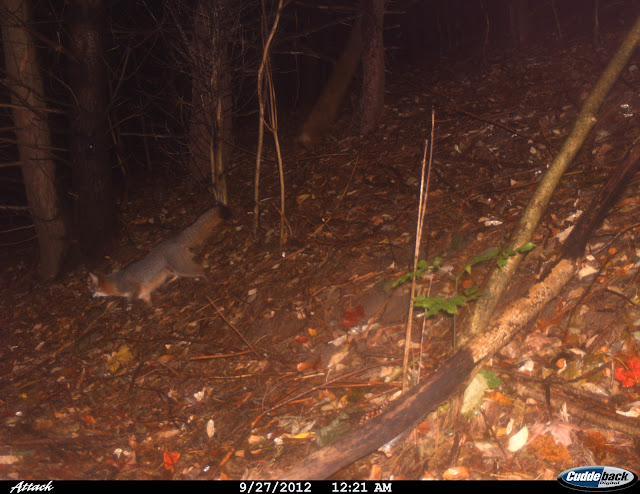 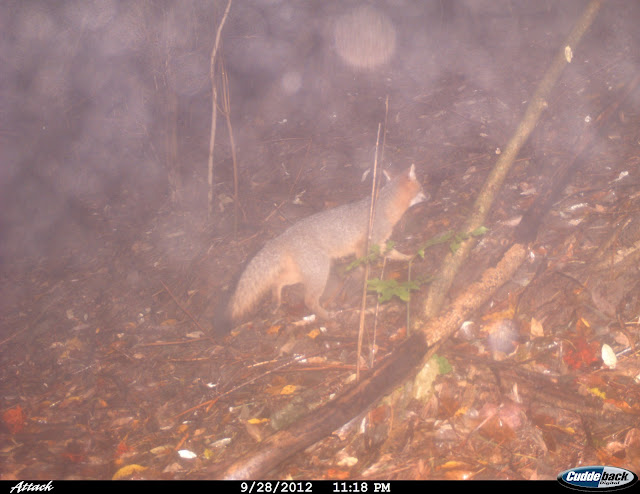 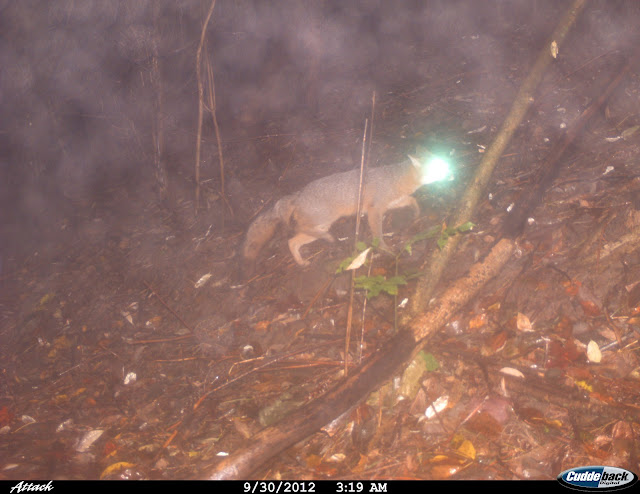 All 3 pictures have a gray fox in the picture. Now, the question is: are they all the same individual? Or are they different animals? Perhaps that's another blog entry as well. I just can't believe that this malfunctioning camera actually pulled through for me this weekend, thank goodness. Talk about coincidence!