Last weekend (September 28-29-30, 2012) I travelled back west to the Finger Lakes region to visit my family and some old classmates and professors. A class I took 2 years ago, in the fall of 2010, was in progress that weekend at FLCC's Muller Field Station on the South end of Honeoye Lake.


The class, Wetland Mammals, is taught by Professor John Van Niel, and Conservation Tech Sasha Mackenzie. It's taught over 2 weekends, where the class eats, sleeps, and learns at the field station. I believe there are also some meeting times outside of those weekends in the traditional classroom. All in all, it ends up to 3 credits worth of face time with John and Sasha, and one of the best classes I've taken yet. And I took it the first round, when they were still figuring out how to run the course...I could tell this past weekend they really had established the class and articulated what they expected from their students.

I was barely able to contain my jealousy, I'm not sure those FLCC students realize how lucky they are to have classes like this available to them! :)

The part I wanted to blog about from my experience hanging out with them for the day on Saturday (9/29/12), was the river otter dissection I got to watch. The NYS Department of Environmental Conservation Region 8 Furbearer Biologist, Scott Smith, came to guest speak on the ins and outs of trapping in New York. I first met Scott when I was a student in this course, and have since gotten to work with him a couple times (Honeoye Fur Auction). He's a great biologist, down to earth, and really willing to talk about his job. He's great addition to the course. 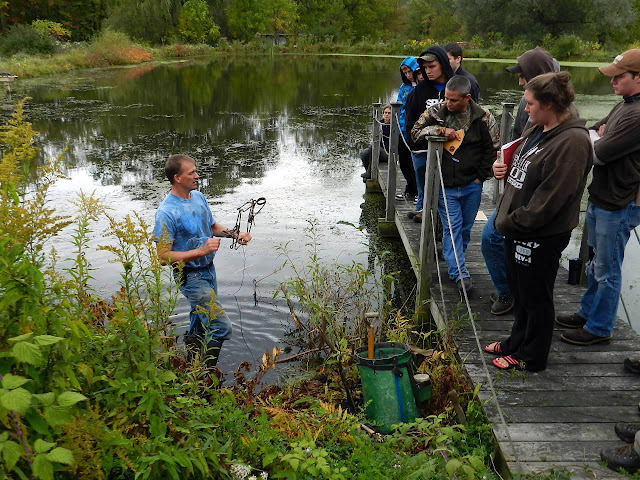 Scott ran through different types of traps, methods of making a set, using scent lures, the biology of how the animals actually die (FYI, it's not drowning, it's high levels of CO2 in the blood stream), and set them all up so we could see how it was done. He explained the necessity of trapping: I am not a hunter or a trapper, but I realize the importance of these methods of harvest for managing these species of wildlife.

Scott also brought with him some road-killed specimens of interest. It's great for FLCC's conservation faculty and staff and the local DEC biologists to have such a close relationship. The students get to totally take advantage of that relationship and shadow the biologists, and also get cool presents like dead beavers, bobcats and otters delivered to them in class! 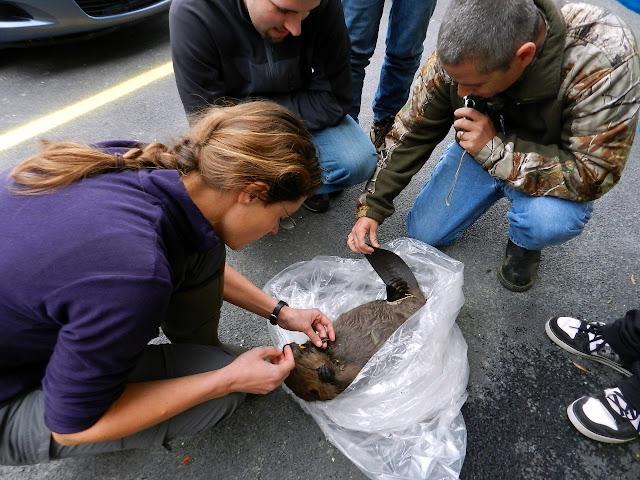 Sasha and student Rodney checking out the beaver. 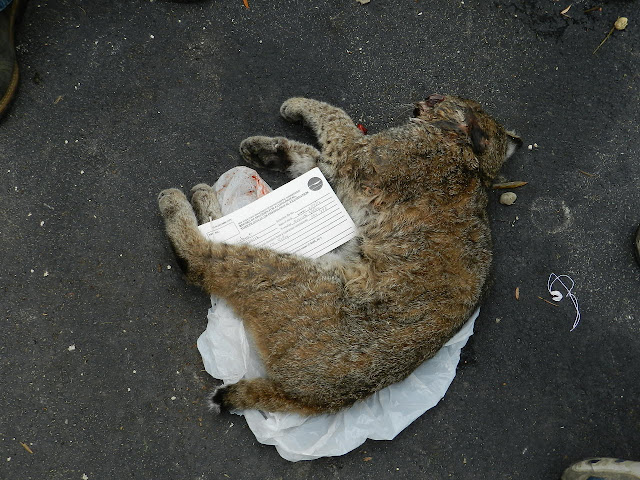 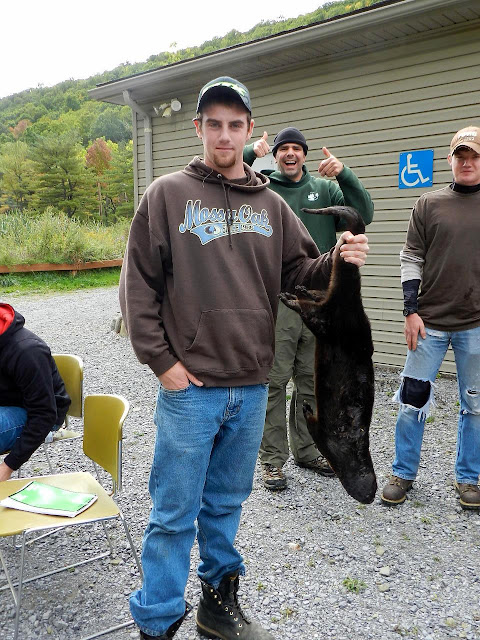 ...and student Luke with the river otter (and a couple of really excited classmates behind him)!


A side note before I talk about the dissection: 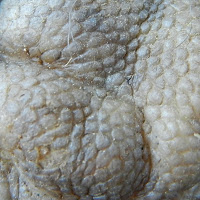 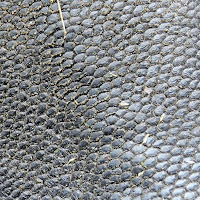 One of these is the tail of the beaver, and one is the sole of a porcupine foot.
Both have similar textures, and are REALLY cool! Glad I got the check them out.
(The porcupine picture was from the Porcupine Paws entry I wrote recently..) 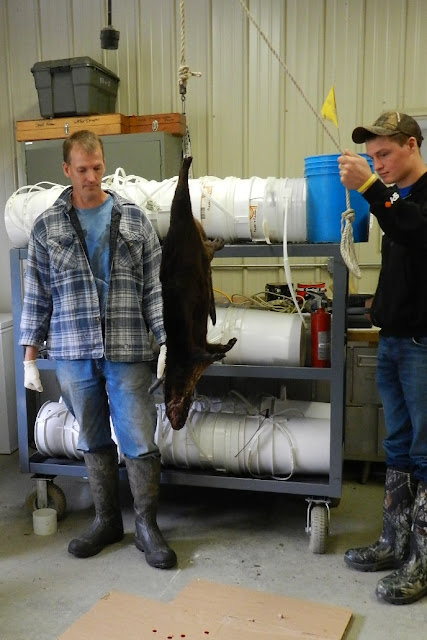 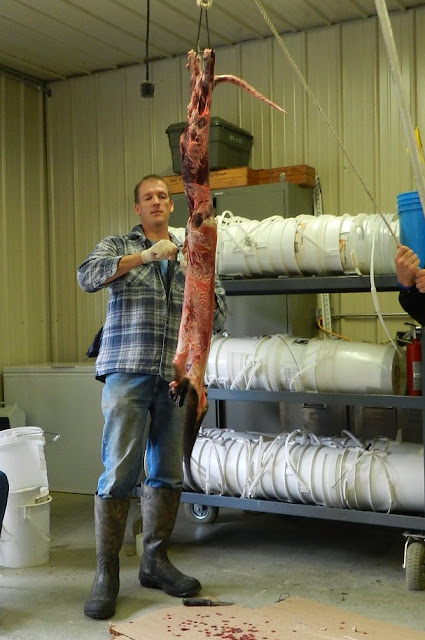 Once he made it down the tail, around the ankles, and around the vent, it was just like "pulling a sweatshirt off"...gross, but I guess true. An analogy we could all relate to :) 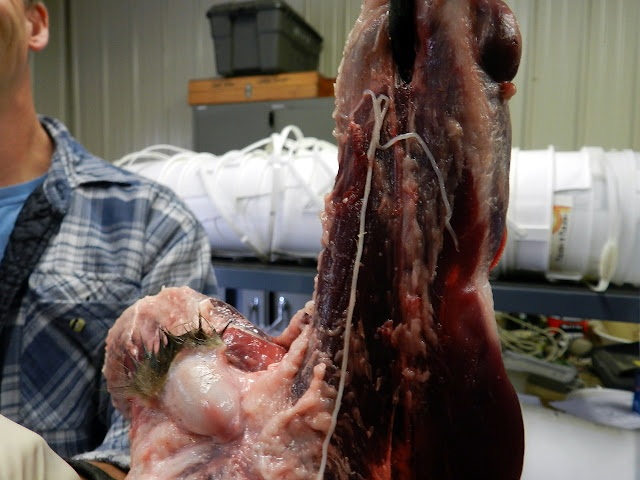 On one leg, he found these parasites. I don't know what they were, but it seemed very strange to me that they were between the skin and muscle. I would expect to find them in the organs, but Scott seemed unsurprised. 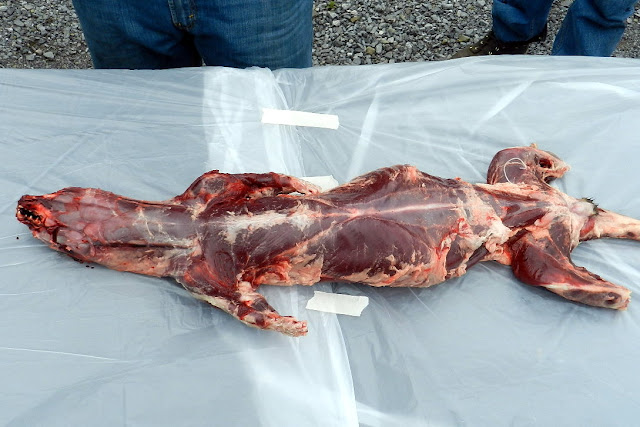 Once the skin was totally removed (it was going to be saved, tanned, and used as an educational skin), we moved the group outdoors. A naked, dead, thawing river otter smells a bit...ripe...and we needed that fresh air. 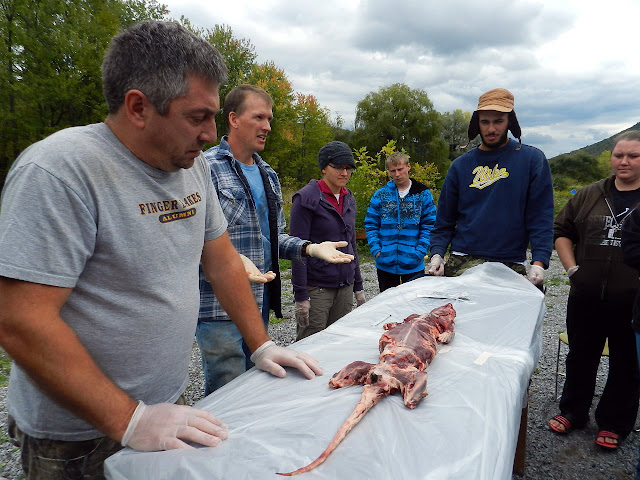 Scott took the lead on the dissection, with John as back up...and as you'll see in a few pictures, a ton of student help as well! 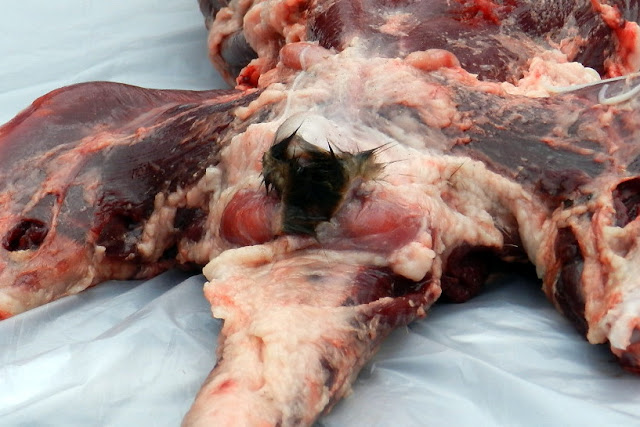 Working up the animal: I thought these round, bulbous features were testicles, making this a male otter. WRONG, these are scent glands. Otters are in the Mustelidae family, along with weasels, mink, fisher, badger, and wolverine. All are stinky critters, and possess this scent gland. Both males and females have these glands, and this, by the way is a female! 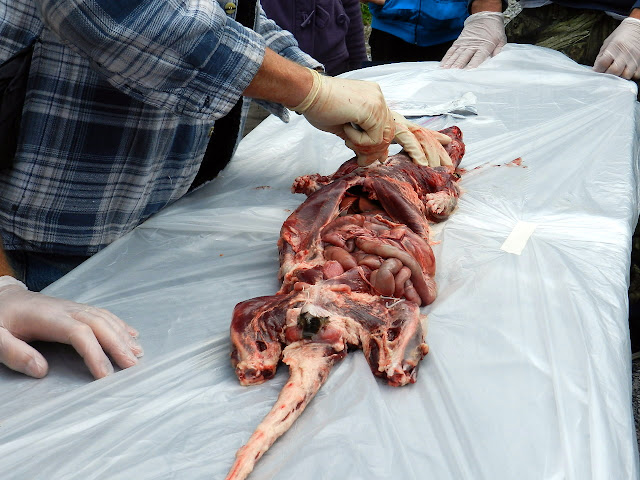 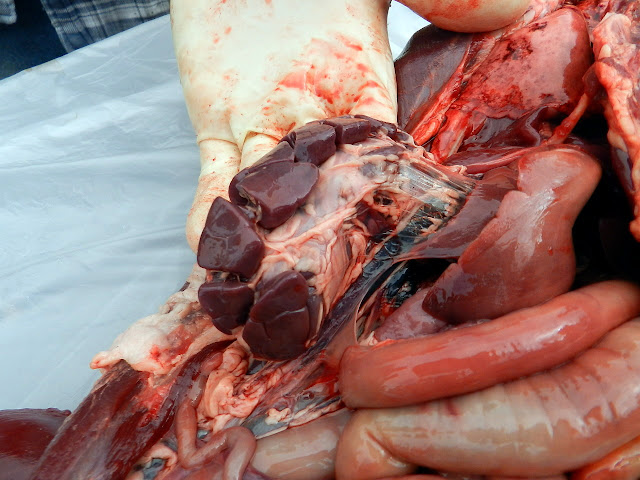 Kidney(s?)...very different than what we "know" kidneys to look like. This is was all segmented and in one group, rather than separated into 2 halves. 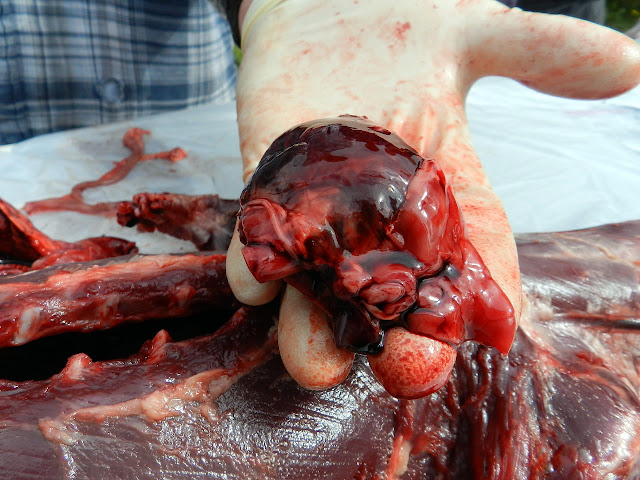 The heart- we all agreed it seemed relatively large for the size of the animal. A human heart is about the size of our fist, right? Well I imagine if this otter made an adorable little fist with it's paw, this heart would easily be twice as large. 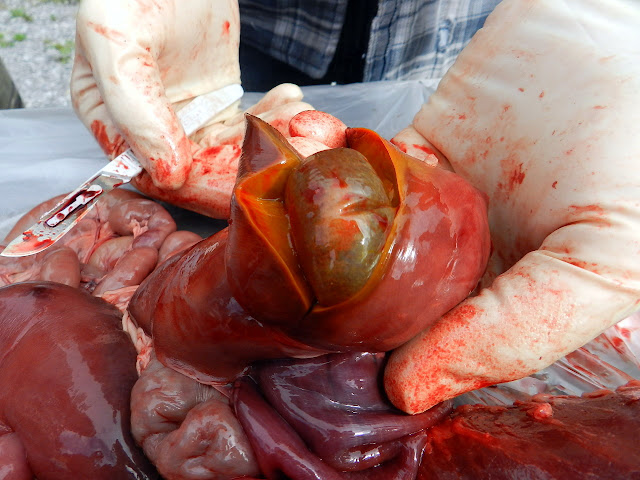 Gall bladder- full of bile, which is apparent because of the color of the organ. 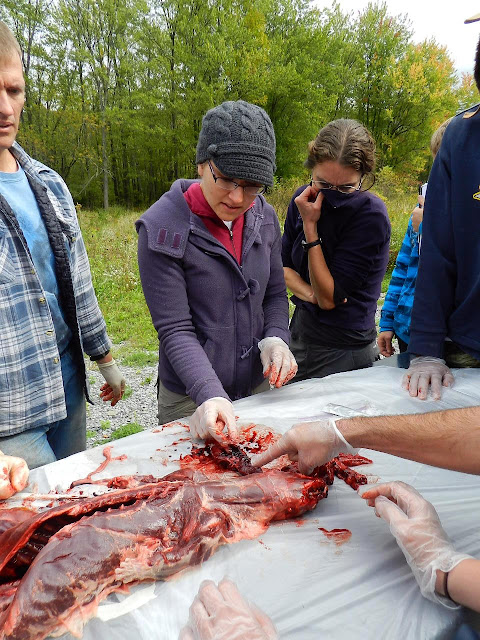 We had a visiting professor, Lisa Tracy (North Hennepin Community College, MN) with us for the weekend, a professor of biology, who had a lot to share. It was really neat to have John (the wildlife educator), Scott (the practicing biologist), and then Lisa (the lab biology educator) all on the panel dissecting the otter. Having taken this class 2 years ago, and watching John go through this alone, I had something to compare to. Lisa talked a bit about function of the parts, and how they connect. 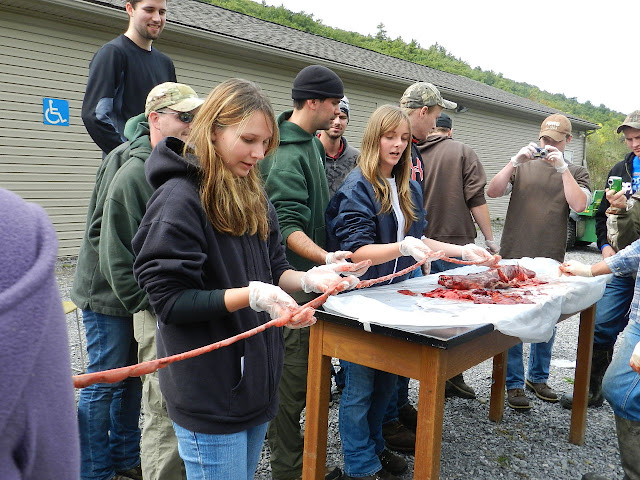 THEN...they took the large intestine and stretched it out. This picture only shows part of the students holding it. To my left there were 2-3 other people standing, stretching the organ out. It was REALLY impressive! 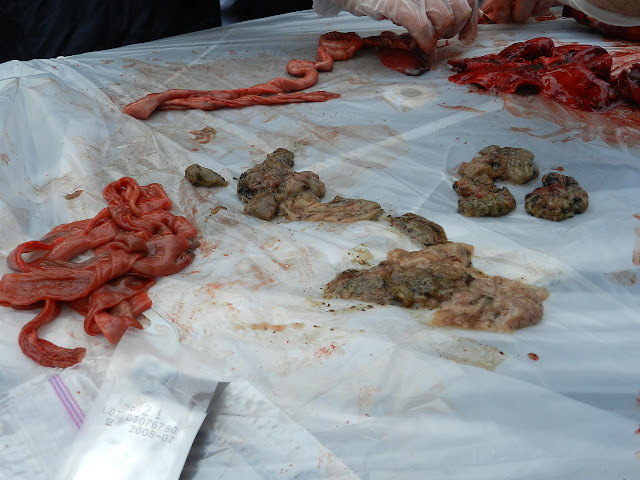 OK, this is the part that got me and made me walk away for a minute.
They began squeezing the contents of the intestine out. Along the way were various levels of digested food matter. Otters eat fish and small invertebrates, which stink on their own. This was truly a smell to behold in person. I'm sorry I can't convey it through my blog. 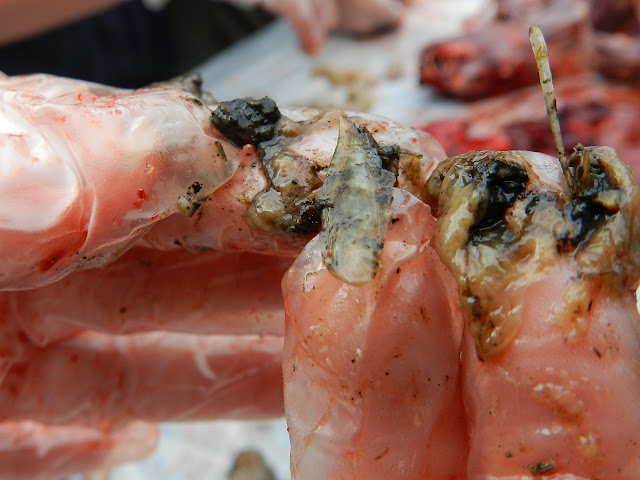 Jackie sorted through a bit of the "scat", and found these indigestible parts. There's a bone there on the right sticking up, and the thing in the middle looks like part of some kind of carapace. Belonging to perhaps an insect or maybe a crayfish? 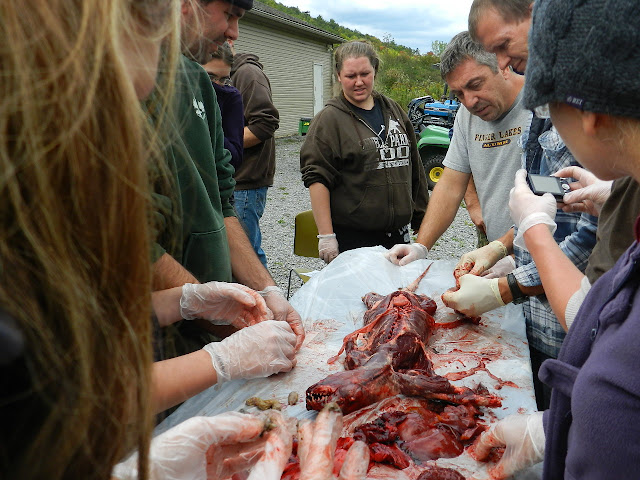 It was really cool to see all the hands in on the dissection. Morbidly, it was like kids and play-dough! I love this kind of learning, and haven't really had the opportunity to "get dirty" yet here at Cobleskill. I know it's gross to look at, but for people like us who want to learn to be biologists, this is a golden opportunity.
That pretty much ends the dissection, and I walked away shortly after the squeezing of the intestines. I'm pretty tough, and can handle doing this kind of stuff. But the smell was a little overwhelming, kudos to those who stuck it out! 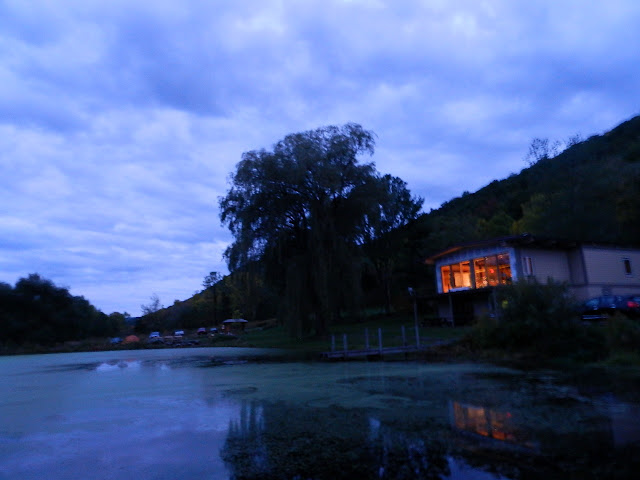 I miss this place, but I must move on for now!
And come back to visit as often as I can.
Thanks to John and Sasha for letting me hang out for the day!
Written by: Alyssa Johnson at 10/04/2012 11:19:00 PM Labels: Canadice, DEC, Dissection, Finger Lakes, FLCC, Honeoye, John Van Niel, Muller Field Station, Region 8, River otter, Roadkill, Sasha Mackenzie, Scott Smith, Wetland mammals