The Mystery of the Owl

Back in May (the 21st-25th of 2012), I was involved with FLCC's Conservation Field Camp, a 3 level field course taught throughout the week. Long days, nights camping out, but tons of fun. I was a student at Field Camp in 2011, but this past course I was hired as a technician for the week to work with the wildlife professors John Van Niel and Clinton Krager.
For past entries, please check out my previous entry: Field Camp 2012, as well as John's entries: Field Camp.
A couple weeks before the class ran, the 4 of us:


Team Wildlife: Mady (the other technician and my roommate!), Clinton, John, and myself.
... went out to Camp Cutler, a property of the Boy Scouts, to set up some equipment that would be ready to use at the start of Field Camp.

John and I had a bunch of camera traps to deploy: Cuddeback Attacks/Captures and both flash and IR. I don't remember how many we had, but I want to focus on one particular camera/location, which happens to an IR Cuddeback Capture.

John wanted to set this type of camera in this particular spot for a reason: flying squirrels. It was set on tree, about 5 feet off the ground, that was aimed at a crooked tree. John had great success with this location before, during the previous year's course. And we wanted to use an IR camera so that the flash wouldn't spook any nocturnal visitors to the crooked tree. 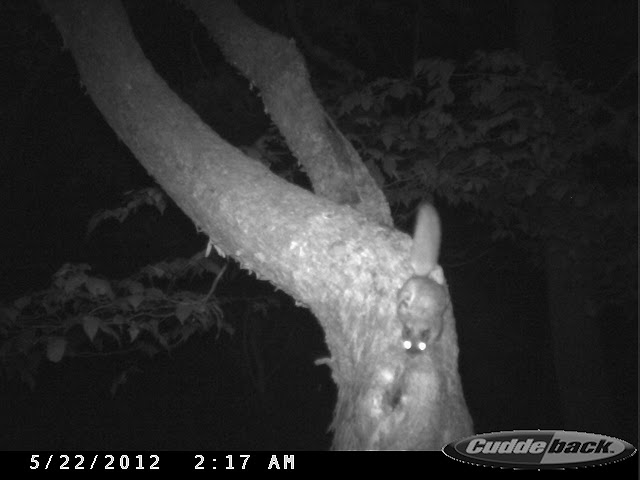 We got our flying squirrel (sp.), so it was a good placement!
Anyway, the REAL excitement is the picture we got of a certain nocturnal bird species. It's an owl, definitely an owl, but the specific species is under discussion at the moment. Here it is: 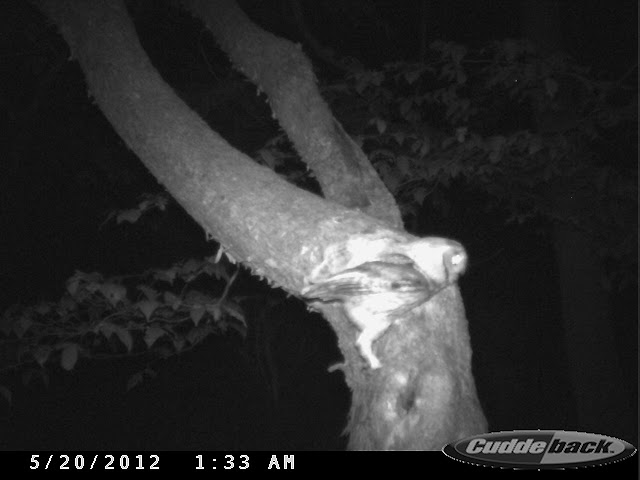 As we're scrolling through pictures on John's laptop, with students standing behind us watching, we get to this guy or gal. And John (a bird-nerd-camera-fanatic) and myself (someone who's aspiring to be that too) looked at eachother in disbelief. To be honest, I didn't know what I was looking at at first, but I KNEW it was something special...and possibly not an Owl I was familiar with. John was super excited, because he HAD an idea of what it could be...and the students were picking up on our excitement too...it was a really cool moment for all of us.
The species that were coming to mind: Eastern Screech Owl (Megascops asio) and Barn Owl (Tyto alba). The EASO is common in Western NY/Finger Lakes region. The BNOW is not common. In fact, it's listed as rare.
I've referred to the NY Breeding Bird Atlas for information...

And the Eastern Screech Owl is MUCH more prolific.
So, the odds of seeing an EASO is much greater than a BNOW.
Well, this summer while I was in Alaska (did you all know I went there???), I kept thinking about this Owl thing. During Field Camp, all of the Bird Nerds that were there all took at look at the photo, all agreed it looked VERY much like a BNOW, but how could it be? BNOWs haven't been seen or reported in the area in a really loooong time.
While in Alaska, I took an eBird workshop. eBird is really freaking cool, and if you're into wildlife and especially birds, you need to create an account and get eBirding. It's like a social network JUST for Bird Nerds! Plus, it's a really great way for everyone (from the layperson to researchers) to collaborate data and see what the birds are up to.
Basically you input sightings and observations. Each region has a moderator, so that if some astronomical number of birds, or a strange species gets reported, they can contact the observer and figure out what the sighting was all about.
So, guess what I did? I reported a 'rare' species in Naples, NY.
A day later, I got an email from the moderator, who I shall keep anonymous. He wanted to know every piece of information about the sighting, as well as wanted to see the pictures that I had. It was so exciting! I felt like I was really contributing to the bird world, and this expert in the field was asking ME for my thoughts. I sent the below pictures to the moderator. One is the"The Owl" and then the second picture is an American Crow taken in the same spot (yet during the day, hence the presence of color). 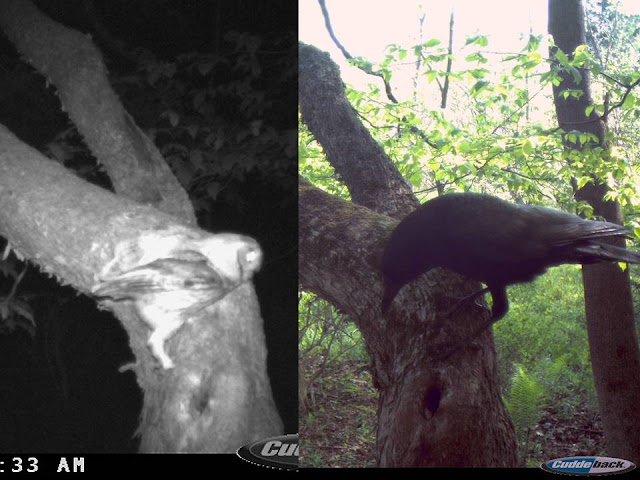 Thankfully, I had a couple of bird enthusiasts in my corner to help with me the verbage and vernaculum. I was with John when this picture was captured, so of course he was the main source of information. He has instilled in me this skeptical and critical way of thinking. I try not to take anything at face value, but ask why, why, why, why, why...until it probably gets tiresome. ((sorry everyone))
I also have Dr. Losito, my new advisor here at SUNY Cobleskill AND the resident ornithologist. I'd call him a Bird Nerd, but I don't know him that well yet...! I sent Dr. Losito the pictures as well, and as I expected- he got fired up. I mean, in the grand scope of the world's goings on, this Owl thing is null. But, in our backyard here in NY, this is big news for birders.
I'm going to share comments that I received from my professors, and from the moderator. All anonymously and leave it at that.
"Not a Barn Owl. Too much streaking below, legs look too thick/short/heavily feathered, proportions look wrong. Much smaller than the crow - an overexposed Screech Owl. The facial disc doesn’t curve around at the top like a Barn Owl-more like the shape of Screech up towards the folded back ear tufts. The dark on the edge of the “cheek” portion of the disc is exactly right for Screech too."
-------------------------------------------------------------------- 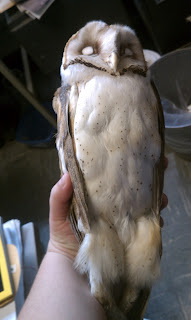 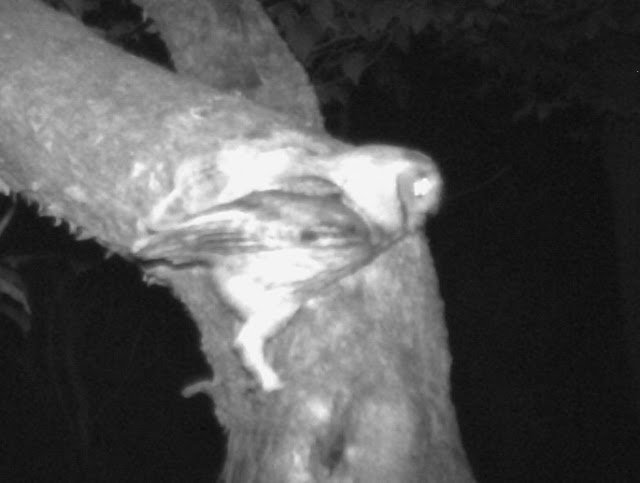 So, birders: what do we think?