The SCA, CDIP and USFWS! 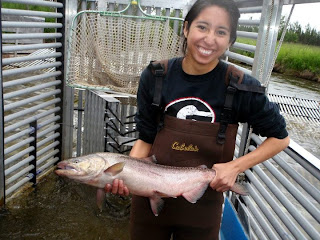 I'm still getting caught up on Alaska entries, and I really wanted to share my room mate's story...even though I've been back for 3 weeks now.
Mercedes was involved in a really cool program through the Student Conservation Association, of which we were both interns. The Career Discovery Internship Program (CDIP), is a partnership between the SCA and the USFWS. It is designed to recruit traditionally underrepresented students for summer internships in the conservation field. Mercedes came all the way from Georgia where she's an undergraduate in the Warnell School of Forestry and Natural Resources at the University of Georgia. Her time in Alaska was not spent in the field office that I worked for, but she worked at the Kenai National Wildlife Refuge, where we both lived. 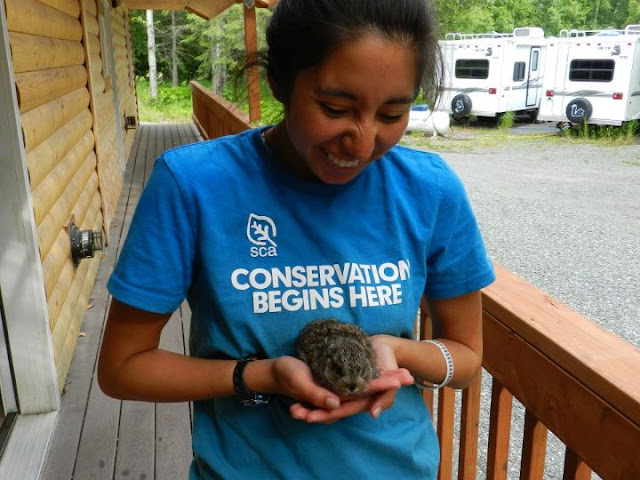 Founded in 2008, CDIP introduces culturally and ethnically diverse college freshman and sophomores to careers in the USFWS. The internship equips SCA members with the hands-on learning they need to begin pursuing professional work in the conservation arena.

To read more about her experience in Barrow, check out the article she wrote for the Peninsula Clarion: Lemmings: Never Too Small to Make an Impact.
I had been wanting to share her experiences, to expand on what the Student Conservation Association has to offer. Several other past classmates were and are working for the SCA currently. Please check out their blogs at: Gawn Wilder and Kelly Manktelow. I can not express enough what the SCA has done for me, and I am hoping to get hooked up with the National Park Service partnership for next summer, if I don't go back to the Kenai Peninsula. EVERY conservation student, regardless of age and level in school, should know about this awesome organization.
Rest in peace to those who were apart of the 9/11/01 attacks on the World Trade Center and the Pentagon.
Written by: Alyssa Johnson at 9/11/2012 12:53:00 PM Labels: Alaska, CDIP, Kenai National Wildlife Refuge, Kenai Peninsula, Student Conservation Association, USFWS