This past weekend I went back to my hometown because we had a 4 day weekend for "fall break". As a disgruntled professor of mine said last week, "Isn't Columbus Day a made up holiday? Wasn't he like the 8th guy to "discover" America?"...well, whatever. I'll take 2 days off from class!

So while I was back, I picked up a few things from my alma mater, FLCC. Among the things, was a container with skulls in it. Animal skulls. Like, meaty, gory, brainy, yucky skulls. I know, I know...but let me explain.

Mady (my roommate) and I collect skulls. We like them because we can learn from the skulls. It's a sign that's left behind, after the animal has died. I know it may seem morbid to collect, but they're already dead. We don't kill animals for their skulls. We started last year tramping through the woods after the snow melted looking for antler sheds and skulls....we've morphed a bit, and now we do collect roadkill with the intention of keeping the skull.

We've had a long-tailed weasel skull and porcupine skull sitting out in the woods, underneath rocks, rotting. Carrion beetles come and naturally clean the bones, making it very easy for us to clean up and make sanitary.

The container I had of skulls, was given to me by a taxidermist. I had expressed a want of skulls, and he hooked me up with a flying squirrel skull, coyote skull, and red fox skull.

Today Mady decided to clean skulls, which is awesome because I'm too squeamish to do it myself. I like them, and I'll collect them, but I don't like the cleaning part, unless it's passive like setting them out in the woods for 3 months.


These pictures are gross, just a warning (Well, not of Mady...the pics after that!). 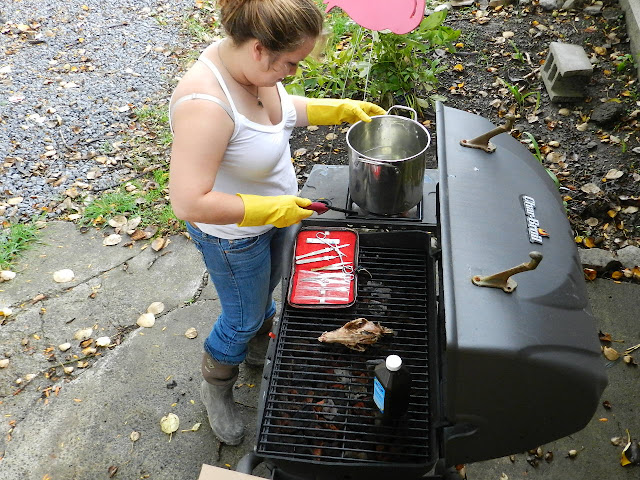 Mady cleaning skulls.
After they've been outside for a long time, and most of the "meat" is rotted off, Mady boils the skull in water and hydrogen peroxide. 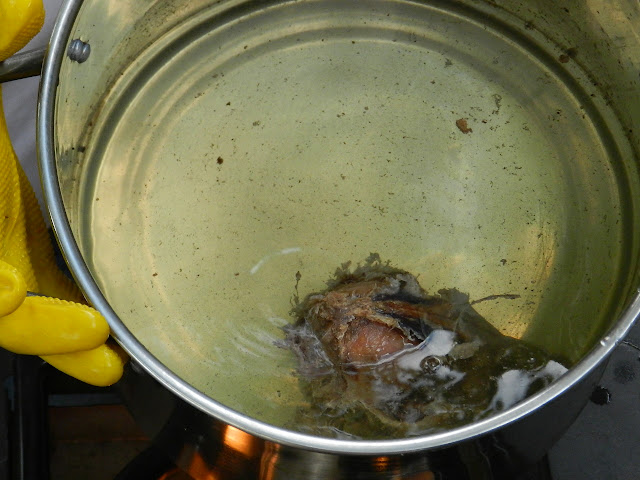 Suggestions: Do this OUTSIDE in a pot that you will never use for the preparation of food items ever again. This is our "skull pot". I got it at Wal-Mart for a few dollars, and serves it's purpose well. 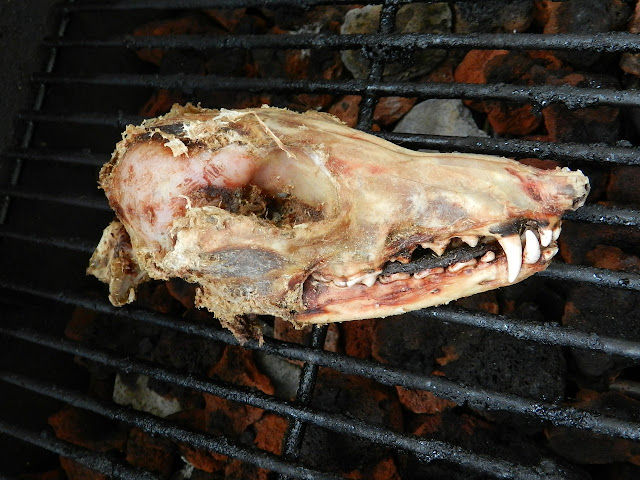 A "pre-rotted" red fox skull.
Mady boiled this for a few minutes to loosen stuff up, then we put it out in the woods, where it will sit for a month or two. 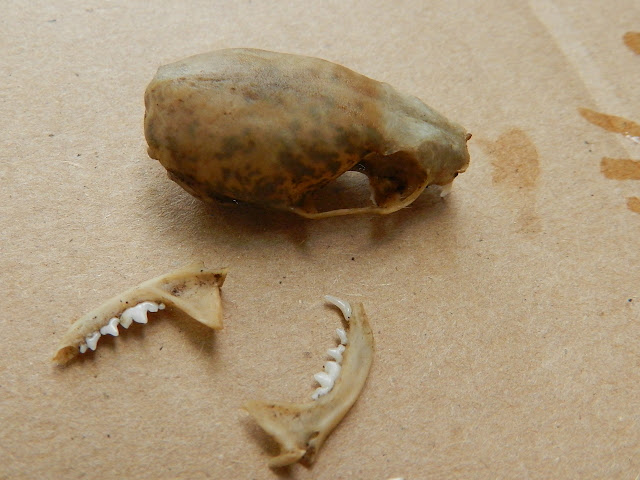 This is a completely cleaned weasel skull.
It came out really nice! I love that elongated brain case. They have a large brain in relation to their body size. They are cunning little creatures. 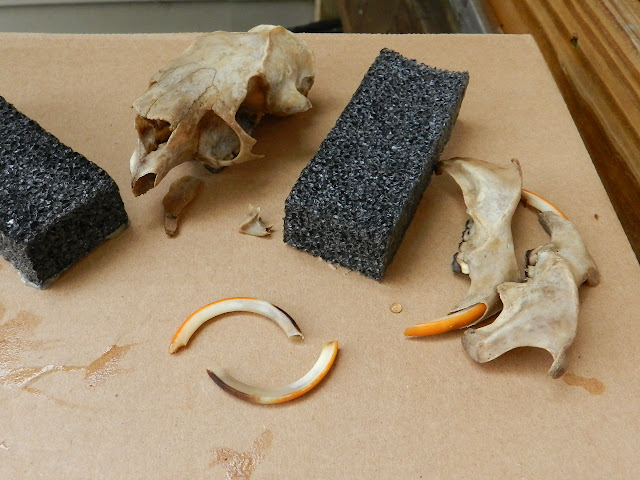 Porcupine skull and incisors.
Those gray blocks are just packaging material stuck to the cardboard. My computer was broken, got fixed, and was sent back with this cardboard and Mady just used this piece as a surface to work on. 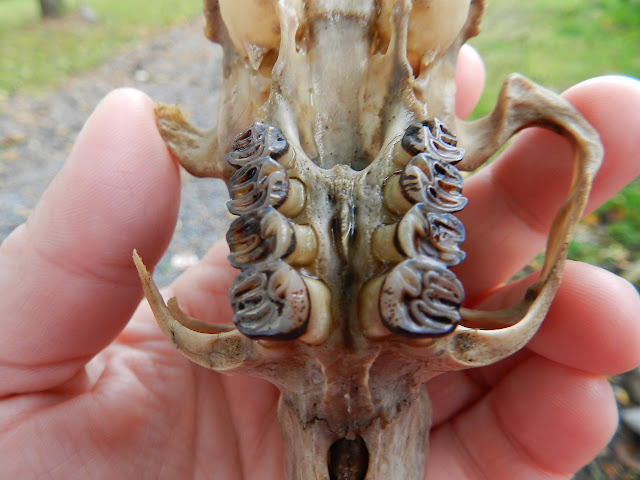 Upper jaw of the porcupine. 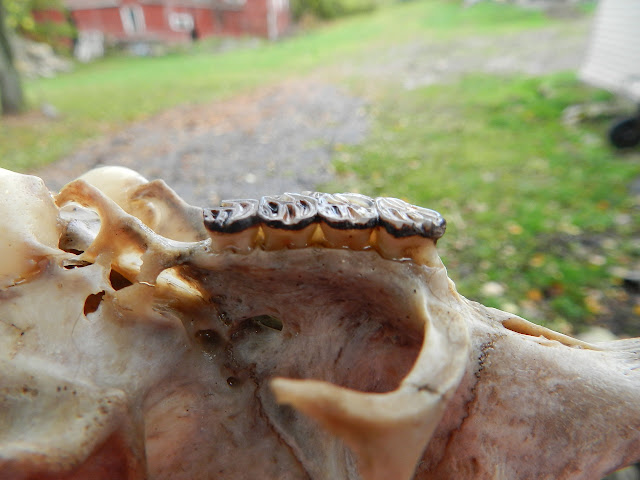 Upper jaw again: Mady and I thought these teeth looked old.
The teeth are very worn, flat looking- and the dentine is evident (dark brown). Porcupines average between 5-7 years of life in the wild (according to Nat Geo). 5 years is a long time to be chewing on wood, bark, and other woody plant material, so no wonder these teeth look the way they do. 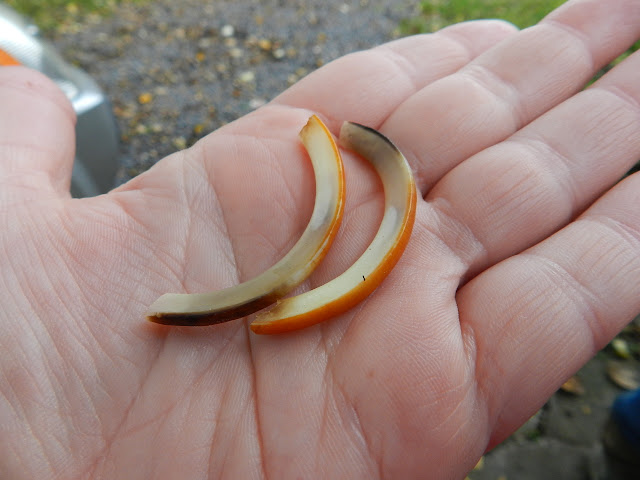 Porcupine incisors.
The darker end was the end implanted in the jaw of the animal, and the orange is the extra hardened enamel which aids in protection of the tooth. These incisors are the same teeth that beavers have, mice, tree squirrels, muskrats and woodchucks (although woodcucks don't have orange enamel for some reason). But they all share the characteristic of constantly-growing, self-sharpening, large front teeth. This makes them rodents in the Rodentia family! 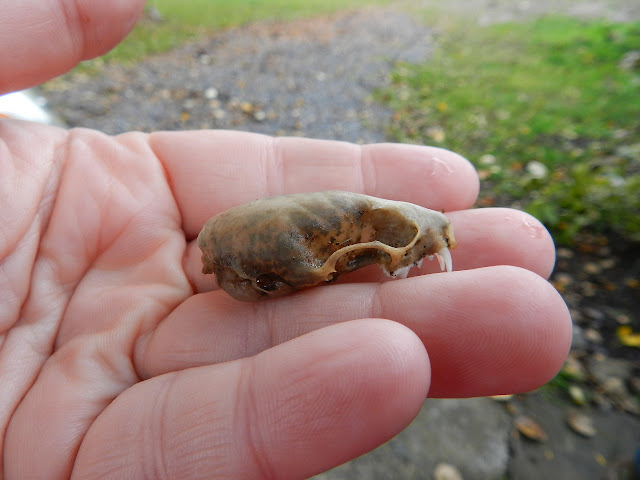 Weasel skull in hand, for some scale. 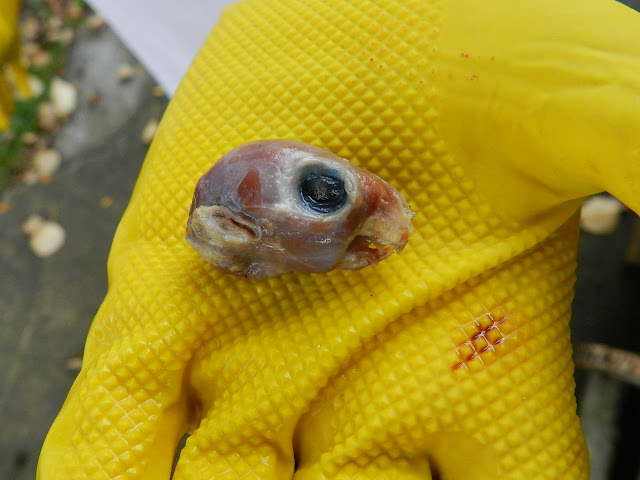 Flying squirrel skull, pre-cleaning, in hand.
Gross, I know. Flying squirrels are adorable, ADORABLE, and this is not. But, look at the eye socket of this thing. HUGE eyes!!! Compared to the weasel above! Why is that? Because they're nocturnal! Weasels I suppose do move around at night as well, but not as exclusively as the flyers. Which, right now I have 3 on the bird feeder in the backyard. It's cool to peep out there at night with a flashlight and see them munching on bird seed.
Flying squirrels are, by the way, the most common squirrels in NY. They're nocturnal, that's why we hardly ever see them. If you have a bird feeder, I urge to check it out at night! Eventually I'm going to rig up a camera trap on the feeder to get pics of them!
Then our friend and FLCC/Cobleskill classmate Adam came over to store his scent lures at my house. He lives on campus, and didn't want to leave them in his room or in his car because they're so noxious. He hung his Bushnell Trophy Cam on the tree my Cuddeback used to hang on, when I got the bobcat picture. And then he went to work setting stinky scent lures out for predators. 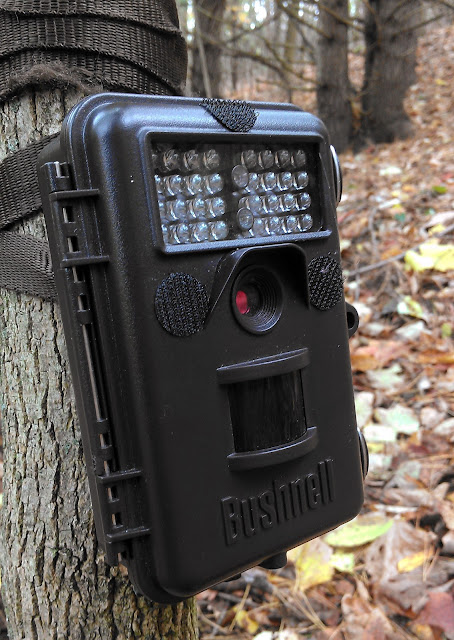 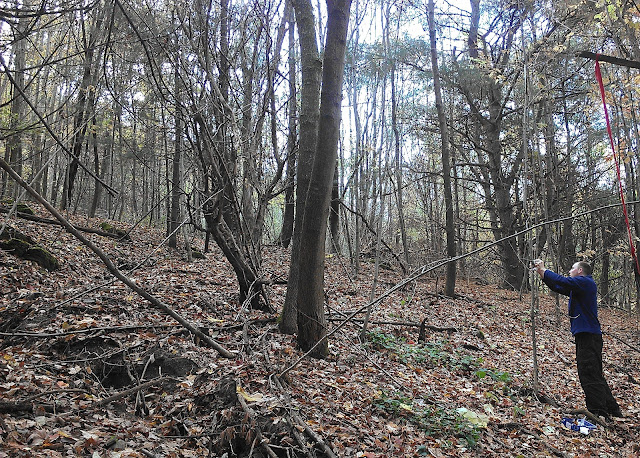 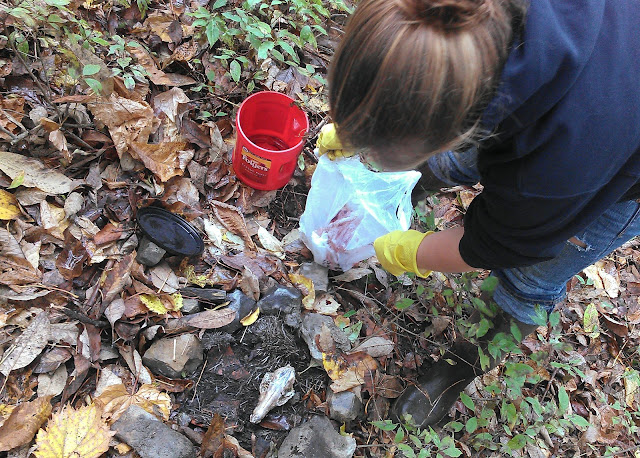 And on our way back down the hill, Mady set out the coyote skull and red fox skull to be cleaned up a bit by Mother Nature. 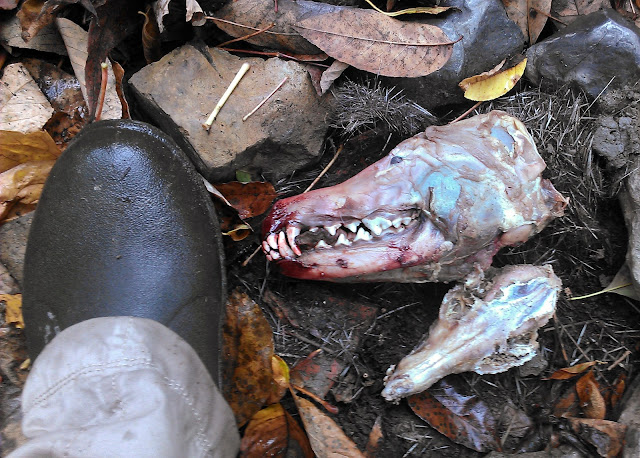 And the last pic of the day, the coyote and red fox skull side by side for some size comparison, along with the toe of my boot.
I have nothing exciting to show from my weekend away, when I checked my cameras upon my return. Crows and a raccoon. Boring! But hopefully I can do a follow up entry soon with some pictures that either Adam or I have gotten!