Last night I experienced a weird thing on Blogger- all of my blog views disappeared and were "reset" to 0. I was so bummed, but I checked this morning and all was restored. Anyone else experience that? Weird! 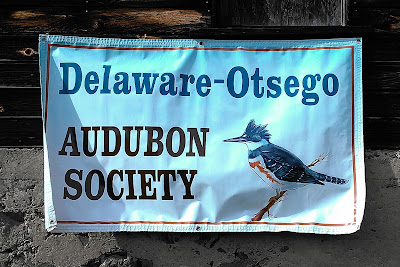 Anyway, on Saturday, October 13th (2012), I was offered the opportunity to participate in a "Hawk Watch" sponsored by the Delaware-Otsego Audobon Society on Franklin Mountain in Oneonta, NY. 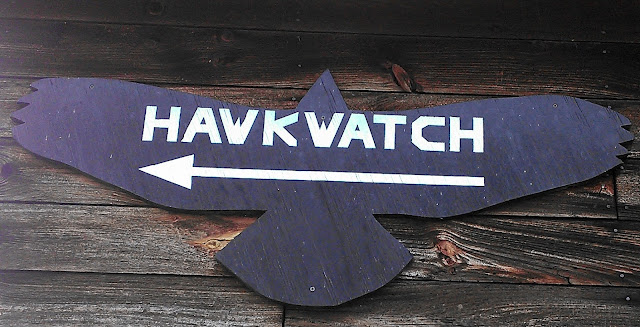 This opportunity was made available to students in the Wildlife Management course here at SUNY Cobleskill, and though I'm not a student in that class, not all the spots were filled so I asked to go. The DOAS was having an "open house" open to the public for an opportunity to see hawks soaring above, and learning to ID them as the migrate through our area.


We then found out that a hawk banding station was going to be set up that same day up above the watch station. We (9 of us Cobleskill students) decided to hang out with the man in charge to hopefully handle some raptors!

I'll cut to the chase and tell you: we didn't catch any hawks. BUT the methods of catching are interesting enough to share! 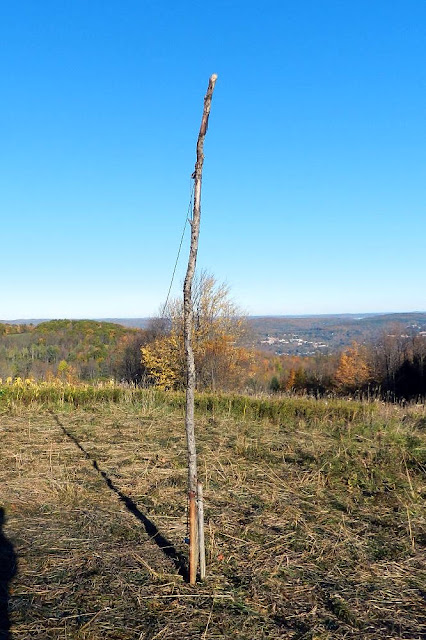 Step #1: Ready the site. This pole has a pulley system on it, that helps to winch the "lure" up in the air, and over to the trap when a hawk has landed. 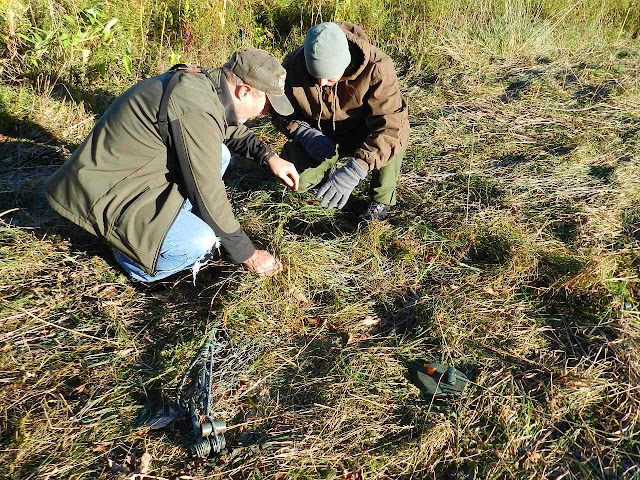 Gary Lawrence (left), the licensed bander for the day, and student Adam are camouflaging the trap, which was called a bow net. In the picture below I've edited it to show the edges a bit better. 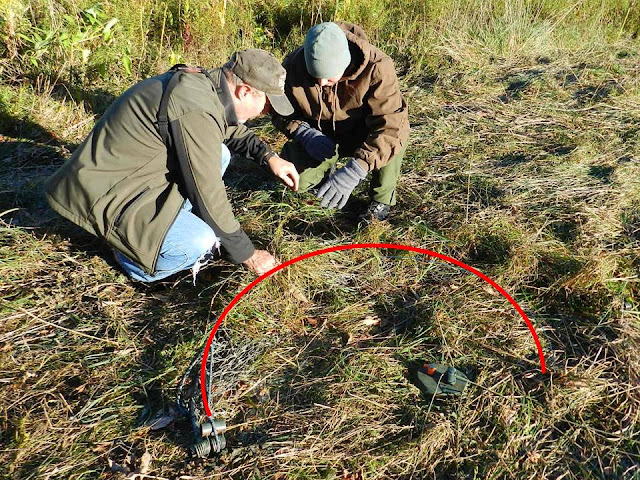 Right now, the bow net is folded in half, like a taco. When that trigger is...triggered (the disk inside the net), the bow net springs open and a net is thrown over the bird. But hawks have good eyesight, and are clever, so the trap has to blend in well. This bow net was for the larger hawks like Red-tailed (Buteo jamaicensis), Broad-winged (Buteo platypterus), and Red-shouldered (Buteo lineatus). 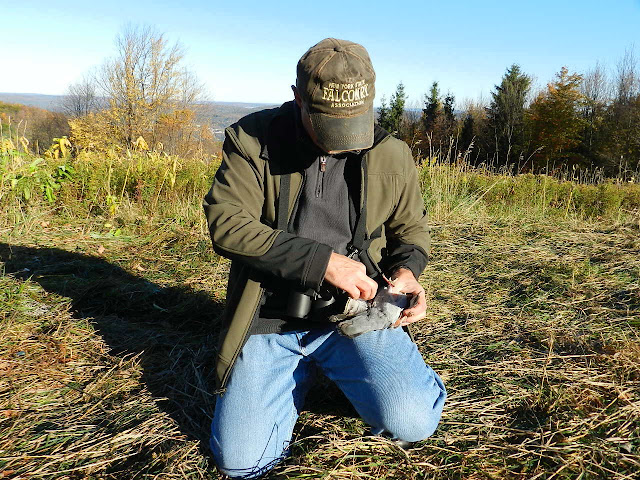 Next, Gary had to dress the lure. Notice I'm not saying prey, but lure. Gary uses a Rock Pigeon (Columbia livia) as the lure. Live lures work the best for luring in hawks, because they typically feed on live animals, rather than scavenging like a Vulture. So, Gary fits the pigeon with a little leather vest, that allows it to move around, but not escape. This also protects the pigeon from harm if and when a hawk lands on it. 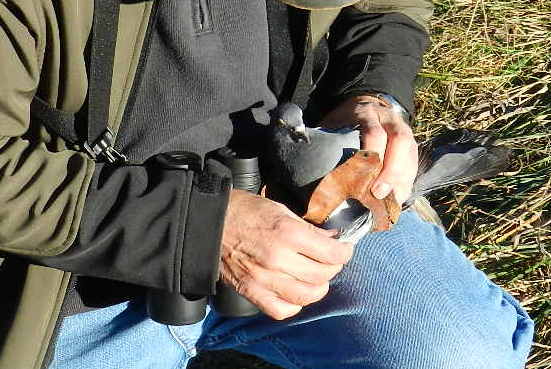 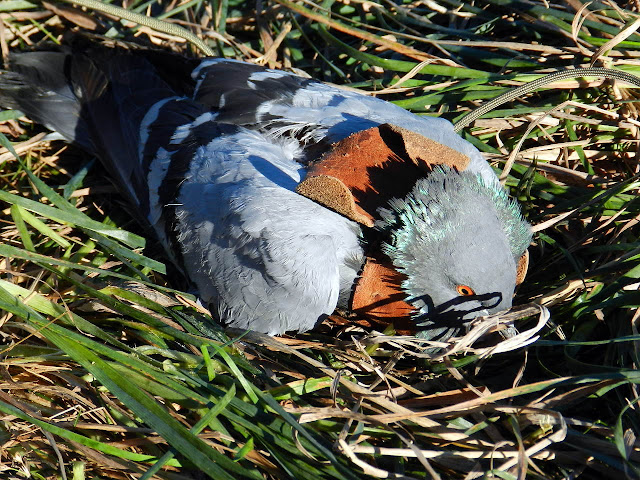 Gary told us that very rarely does he lose a pigeon, either by it dying or by it getting free. These are wild birds that he trapped in a K-Mart parking lot. These birds are introduced, not native, to North America. They were introduced I think 400-500 years ago by Europeans (go figure), and have run rampant ever since. I know this is a live bird, and believe me, I felt bad for it. BUT this species is NOT in danger of population detriment. And it's actually kind of a pest. It doesn't really have "cute factor" on it's side, although the nape and mantle feathers (back of the neck, upper back) are really beautiful on this bird. 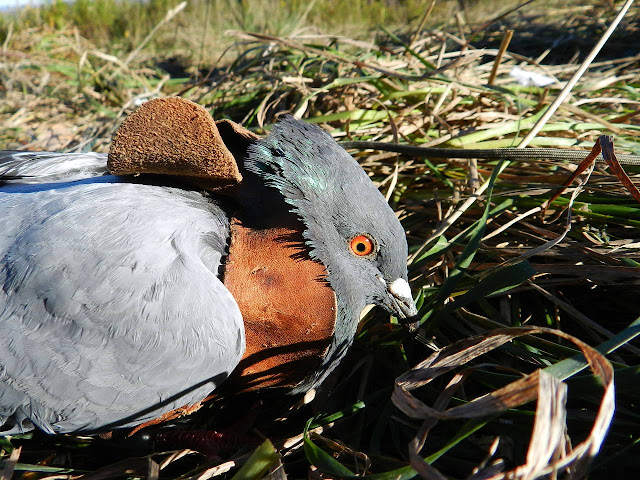 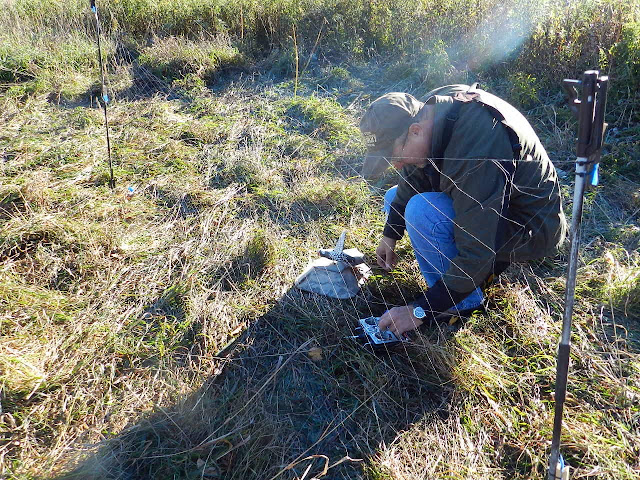 We also set up a mist net and this little battery operated "bird" hoping to snag smaller hawks like the Sharp-shinned (Accipiter striatus), and Cooper's (Accipiter cooperii). 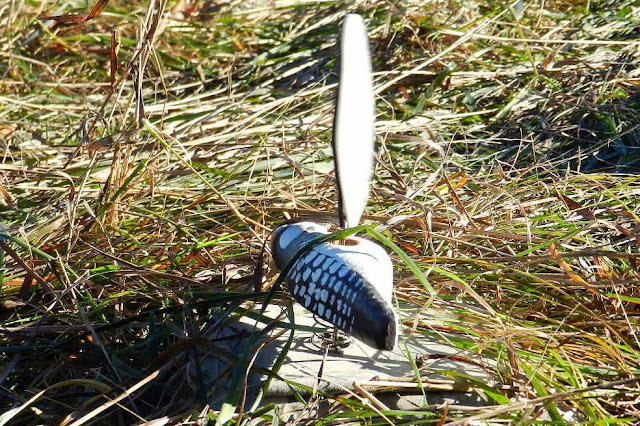 Gary had a remote control that would send the bird spinning on it's side, flashing black and white, which would hopefully lure the hawk in for the kill. As the hawk swooped in, the idea was that it would hit the mist net, which was loosely hung, and then getting entagled enough to hang tight until Gary could leave the blind and retrieve it. 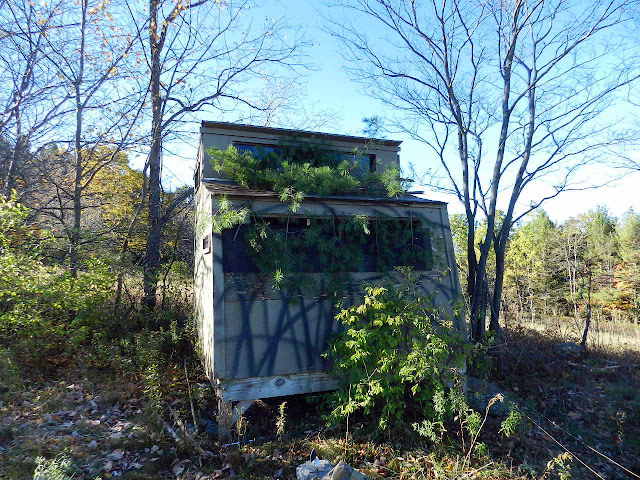 Speaking of the blind, here it is. A nice 2 story, camouflaged hang-out to wait out the birds. 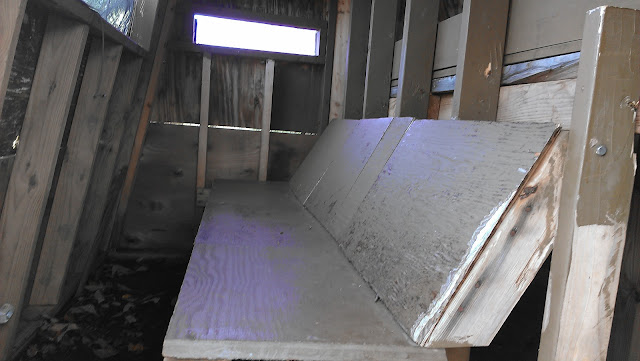 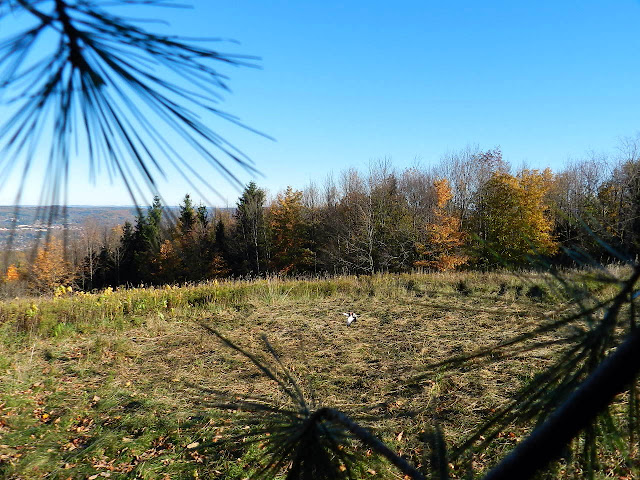 A view from the inside out, at our pigeon flapping around...NOT attracting hawks :)
Well, we tried. A Cooper's or Sharpie swooped in for a better view at one point (they look very similar), but didn't hang in long enough or close enough to get caught. It was a long, chilly day, BUT fun and interesting. Hopefully I'm able to go out with Gary again one day and be able to help band. I've banded song birds and ducks, now it's time to move on up the food chain! 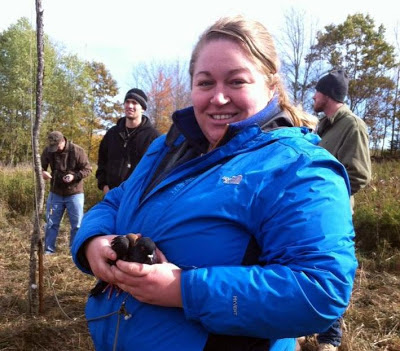