Almost week ago, my friend Adam came over and set up his Bushnell camera in my backyard, see my Cleaning Skulls and Setting Cameras entry for the set up.

He came over yesterday to check on his camera, because he had apparently moved it up the hill, further from the house and put it near a tree stand, not belonging to anyone we knew. He was nervous, thinking that someone was going to take this camera.

Also, he found out that I had access to these: 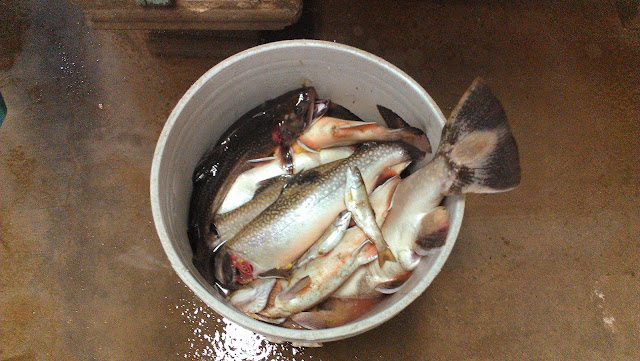 Fresh, dead brook trout. I work in a fish hatchery (I should write an entry about that sometime...), and have access to dead fish. I asked if I could have some, and my boss shook his head and laughed, and said yes, but didn't want to know why. Well, I'll get to that shortly :)

The only pictures that I have worth sharing from the past 6 days of camera trapping are both Adam's.

﻿
﻿
Can you tell what it is? Unfortunately infrared cameras don't yield the best pictures, BUT at the same time, they don't spook animals away either (no visible flash). So this critter is a fisher (Martes pennanti), a medium sized member of the weasel family, Mustelidae. They tend to be a bit larger than a mink, but small than the river otter (both cousins of the fisher). Below is a cool picture, and I hope it's accurate (which I think it is...). I typed into Google "river otter vs fisher vs mink" and got this link to Tumblr. I actually don't really know what Tumblr is, and I don't care to. Another time waster to take up my time already spread-thin-with-random-internet-surfing.

Anway, from left to right: weasel sp, mink, pine marten, fisher, river otter. Excuse the drawings on the fisher skull, BUT this is a cool size comparison image.

The fisher like upland wooded areas, which this site obviously is! They are a personal trophy animal for me, meaning I'm dying to get one on my camera, or to see one even in the flesh! But, I'll take Adam's picture for now. At least we know they're around.

For more info on the fisher, check out the USFWS's page: Fisher.

So fishers are attracted to STINK. Adam pulled out all the stops, smearing all the scent lures he had on every surface in this site. In the middle of the picture you can see a bit of something white, this is a cotton pad that he put some of the scent on to help hold the scent up in the air. 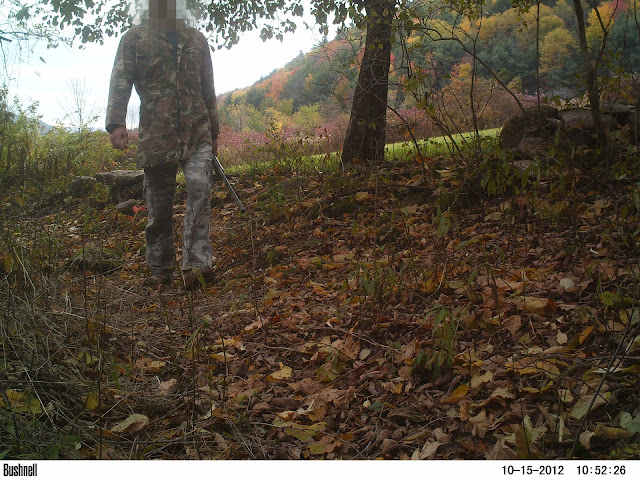 Our neighbor...checking out the property line apparently.


When I discovered that my boss at the hatchery had no qualms about giving me dead brookies, I of course snatched up a few of the larger fish, and took them home. 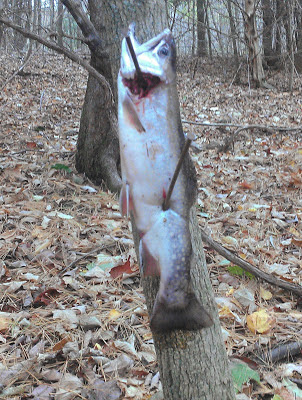 This seems weird, I know. I'm sorry if it's gross. BUT these fish were already dead! And they were just going to be ground up into little bits and used as fertilizer. It's a bit culty and sadistic looking I guess, if you were to stumble across this in the woods, not knowing what was going on. Well, hopefully I have some KICK ASS photos to share as a result! 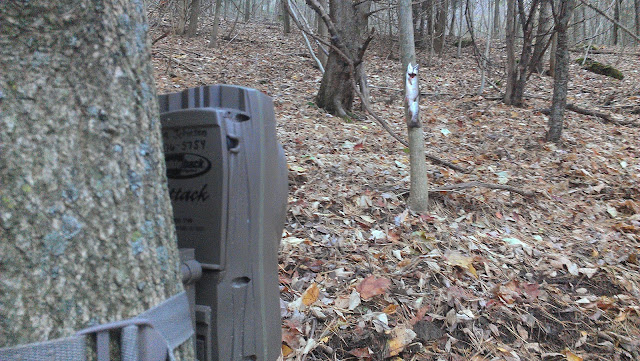 I have nothing to share from the past 6 days of trapping. There is apparently something wrong with the SD card. It shows up as an external source, but when I click on it to open, I get nothing. Which is a bummer! Hopefully NEXT time I'll have something good to share!
Written by: Alyssa Johnson at 10/16/2012 08:15:00 PM Labels: Bait preference, Brook trout, Bushnell Trophy Cam, camera trap, Cobleskill, Cuddeback Attack, Fisher, scent lure