Well my first semester is over at SUNY Cobleskill, only 3 left to go! I travelled back to the Finger Lakes region for the holidays at my parents house, and of course I left my camera trap set out at my house, so I’ll have that to look forward to when I return back in January. I have it set in the same spot where I got the Barred Owl (see previous entry).

I was able to borrow another camera from some friends to use while I’m visiting my hometown! It’s the same brand and model: Cuddeback Attack. Instead of having a 1.5 strobe flash, like many traditional cameras do, this camera has a panel of 36 LED infrared lights that allow the camera to take a picture in the dark, without a flash.

Pros are that the camera doesn’t give it’s presence away like a flash would, thus not spooking the wildlife. Cons are that it doesn’t take as good of pictures that the flash does. They’re sometimes blurry and they’re always black and white when taken at night.

The label you see on the camera is because the friends that loaned this camera to me have many cameras, and this is how they keep track of who is using what.

The following pictures were taken on a Cuddeback Attack IR camera.

This past spring (2012) I conducted a mini field study in the heart of the Finger Lakes at the south end of Honeoye Lake, as an independent study at FLCC. To read all about that study, check out this link: Field Study @ Muller Field Station.

The little white pad that the deer is sniffing has a scent lure on it. This is similar to a bait: it stinks and brings the animal in to check it out. But unlike a bait, it doesn’t provide a “reward” which could condition an animal to alter it’s natural behavior and come back to the site repeatedly as a food source. But that’s not important for the purpose of this post!

It was very fortunate that this deer, or 2 different deer, came in at the same angle and in the same posture so that I have a nice daylight/darkness comparison to share with you!

For those of us who just “play” with these cameras, either the Flash or IR is fine to play with. Those who conduct research or who are trying to minimize the chances of their camera from being seen (by animal or human), IR is the way to go.

So, here’s what my borrowed camera is “looking at” and I’ll be checking it in a few days and if anything interesting shows up, I’ll be sharing! That is: if the world doesn’t end tomorrow. 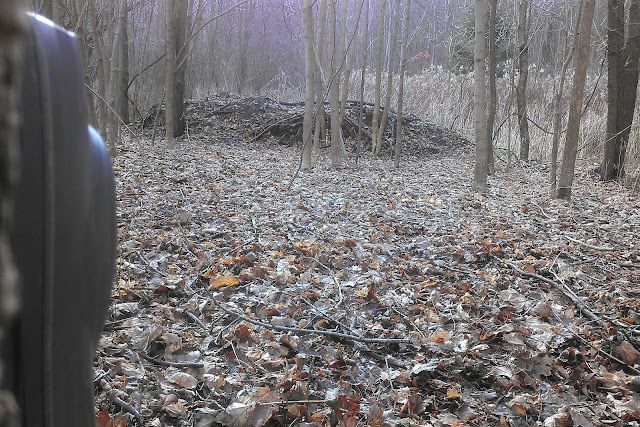