To catch up on previous "The Big 5" entries, click here! 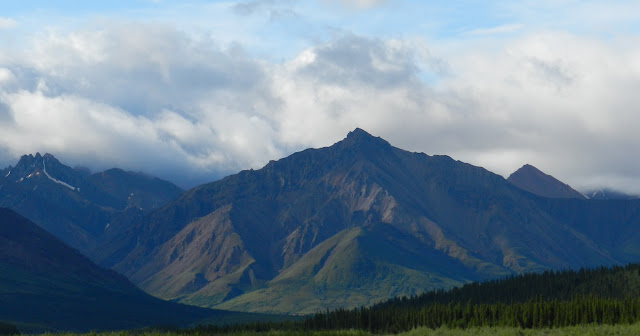 The next "Big 5" critter I'd like to share is the Dall sheep (Ovis dalli). Dall sheep are cool. I really like domestic sheep/goats, and these guys can't be too different- they have personalities, aren't all that bright, but are typically gentle and loyal pets. I know rams can be nasty, but my experience of growing up with goats was a good one. These wild sheep are all white, the only all white sheep in fact, and their coloration is a camouflaging. They spend alot of time in the tippy-toppy parts of mountains and ridges, where the snow is found in most abundance. Dall sheep are not the same as a big-horned sheep, though it is understandable how you could confuse the two species. They are in the same genus (Ovis dalli and Ovis canadensis), which makes them practically cousins! Compare below: 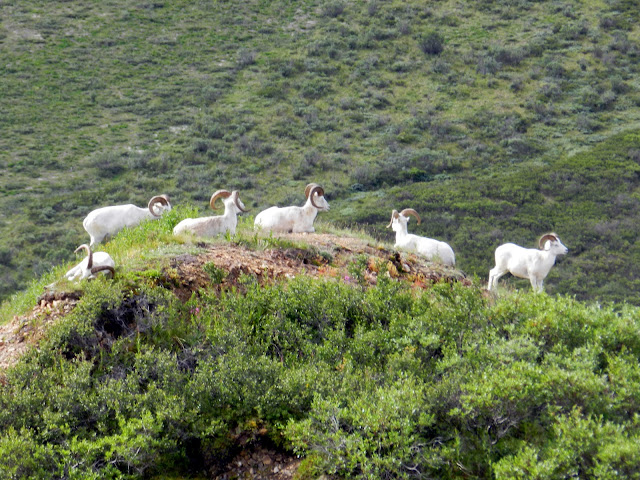 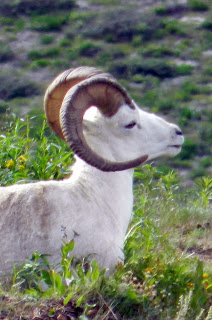 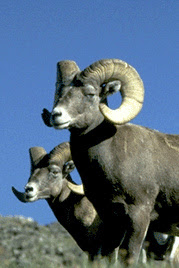 Dall sheep on left, big-horned sheep on right.
Anyway, I want to tell my favorite sighting story of the Dalls. We saw them often throughout the park, but often WAAAAAY up a slope, far away. It was hard to see them, most of the pictures I took were blurry, sasquatch-style pictures. We did have 3 amazing opportunities though to get close (on the shuttle bus) and observe them. The final up-close sighting is the one I'm going to share.
We were driving along the park road, which is some spots is pretty precarious. In the picture below is Polychrome Pass, not where we saw the sheep, but in a very similar spot. 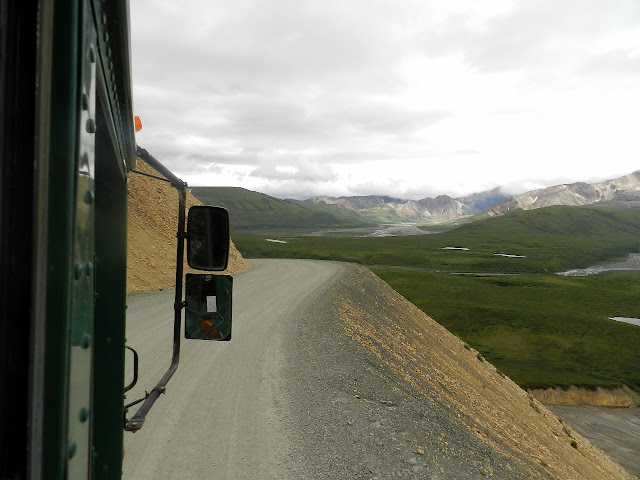 It's very steep on either side, BARELY allowing for one shuttle bus to squeeze by, forget 2! There's alot of creeping around corners, and quick stops to allow the bus that has the right-of-way to pass.
We came around a bend, and saw several buses lined up, although we couldn't quite see what was happening yet. A few more bends, and we were upon the scene. 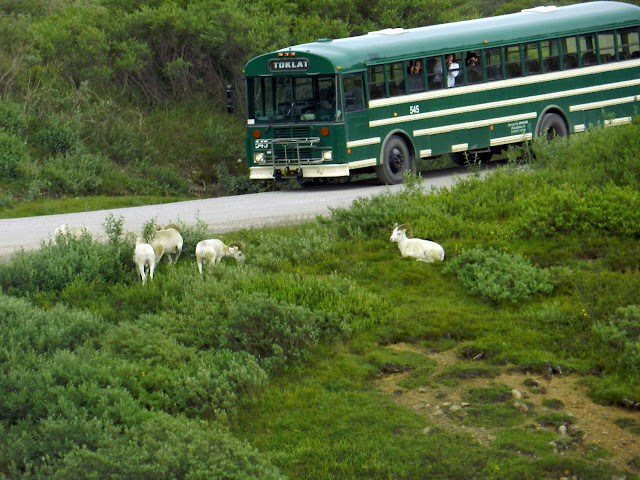 There were actually 3 buses stopped here. Just to the right of the frame, 2 buses were pulling away. They belonged to the Kantishna Experience lodge, which is private property that was encircled by DNPP when it expanded. They have their own buses, and apparently are supposed to go by the Park's rules when it comes to wildlife.
Our driver was very upset that 2 buses were stopped there for so long. I guess they have a rule of just a few minutes, as to not agitate the animals. We sat waiting for them (they had the right-of-way) for several minutes, and when we pulled up, they had been sitting here already for who knows how long.
The bus shown in the picture is a shuttle bus that had been waiting their turn to pull through. You can see guests on the bus taking pictures, so their bus driver stopped for a moment to allow pictures to be taken.
Then our driver was again frustrated because the driver of that shuttle, wedged herself between the sheep and the opposite side of the road. Apparently drivers are instructed to never restrict an animals movements. If they want to cross the road, they should have the option, which means drivers are to either stop short, or pull ahead for picture taking.
As soon as that shuttle moved through, and we had a turn to go through, 2 sheep bolted to the other side. Apparently the grass IS greener....ha...ha. 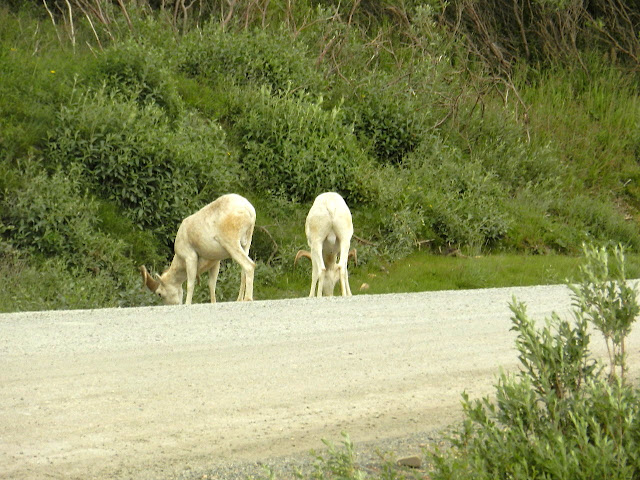 We then crept up, to pass through because we were running behind schedule and had actually already had another awesome viewing opportunity (the first picture of sheep is it) that day. 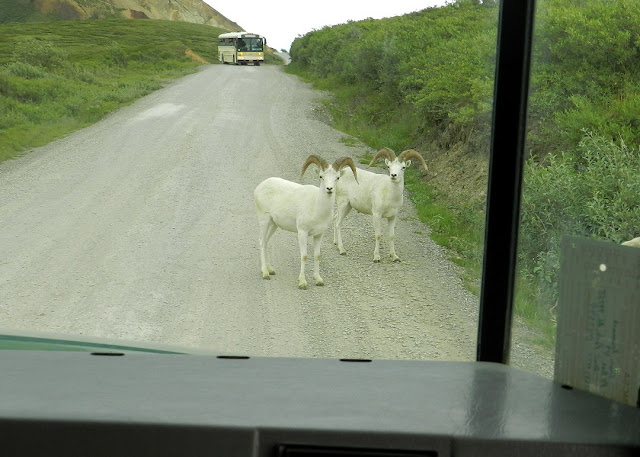 And these sheep were not having it.
They bolted in front of the (slowly) moving bus, and stood there! They actually confronted the bus, and stood their ground. We sat like this for maybe 30 seconds, and then I guess they deemed themselves the victors, and moved back to the right side of the road with the rest of the sheep.
It was so interesting to watch! I've seen male ungulates confront one another before. And actually the best example I can think of are my pet goats. They would play for dominance on this little dog house we gave them to climb on. And these Dalls looked just like that. Firm stance, raised heads, flared nostrils, and alert expressions. 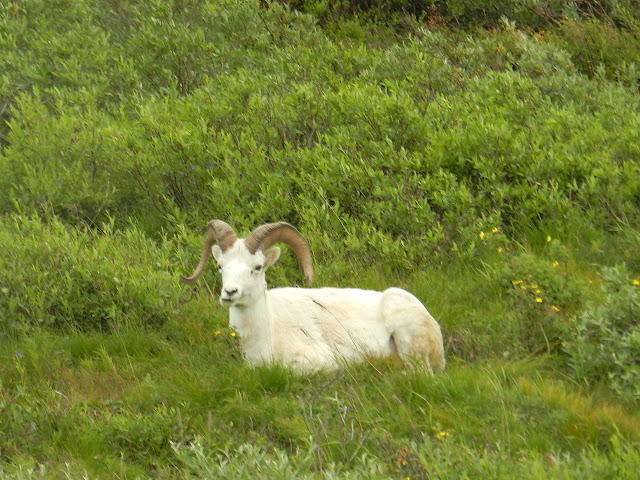 Meanwhile, the others were content with ruminating and chewing their cud. 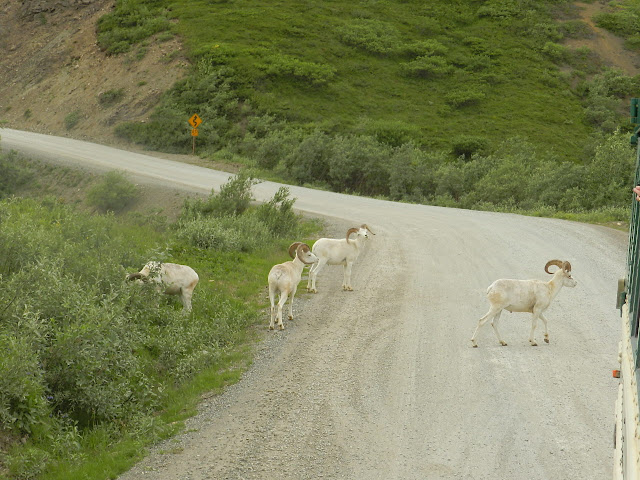 As we pulled away (this is looking towards the back of the bus) the little herd decided to again cross the road and head back up the slope on the opposite side.
It was a great experience that last probably all of 10 minutes, from when we rounded that first corner and saw the bus-jam, til this moment of pulling away. Dall sheep are not the most glamorous of The Big 5 to many people, but they are an integral part of Denali National Park & Preserve. They are, in fact, the reason WHY the land was set aside and a national park was created. To home and give refuge to the diminishing populations of Dall sheep.
﻿
Written by: Alyssa Johnson at 8/06/2012 10:34:00 PM Labels: Alaska, Big-horned sheep, Dall sheep, Denali National Park and Preserve, Joshua Tree National Park, The Big 5