A series of peculiar events...

Recently I acquired several dead fish from the hatchery I work at (SUNY Cobleskill). I shared with my readers that I was going to rig them up somehow in the woods, and place my camera trap near it, to hopefully lure in a curious carnivore like a fisher, bobcat, or who knows what else.

At first, I nailed the fish to a tree. This worked well, until it didn’t. As written about in The Masked Bandit: A Robbery, the fish hung on the tree for awhile, until after a flurry of ‘coon activity, it was gone. I didn’t get a picture of the culprit in the act of stealing, but I can assume it was a ‘coon.

I also received a few comments that perhaps I should rig the fish up on a cable or wire, instead of having the nails sticking out, which could hurt wildlife, or even me or whoever wandered by. Good idea, wish I thought of it to begin with (nailing into a tree through a fish is grisly business).

So 2 days ago, I thawed out a fish, I had stuck the other 2 in the freezer triple wrapped by the way… :) I found a piece of cable left over from a mirror hanging kit I had, and hiked up the hill behind the house to set the thing up.

Stupidly, I did not take a picture of the finished product. It was really cool. I had the fish cabled through the gills, and it was free-hanging from a limb, so nothing could climb up the tree and easily get the fish, so I thought. The camera was set ~10 feet away. Then I “set it and forgot it”, ’til today, when I just HAD to check.

Back up that hill I trudged. I reach the camera site and imediately notice: the fish was GONE. The cable was still hanging there, nothing was disturbed…like I would expect if an animal struggled to free the fish. I was really interested to see whodunnit, so I turned to unmount the camera from the bracket that attaches it to the tree. As I was removing it from the bracket, I noticed that the bracket was broken in several places. It’s really cheap plastic, and not meant to last (ironic…business security to keep the consumer comin’ back…). But it was strange. Fish gone, broken bracket. When I checked the camera, there was only 1 image recorded. And here it is: 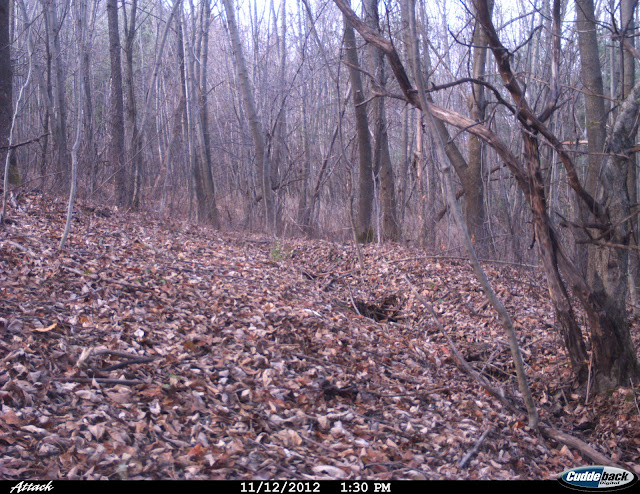 Something must’ve tripped the camera, but managed to get away, with my brook trout. The cable is right in the center of the image, you can’t see it because it blends in.

1) Missing fish, no disturbance, cable intact.
2) Broken bracket (but I should add, the camera wasn’t tilted or off center…it was like someone handled the camera, broke it from inexperience of use, but was able to set it back up almost like normal)
3) NO PICTURES TO REVEAL THE CULPRIT.

I’m so frustrated with this Cuddeback Attack Flash, that company, and camera trapping in general lately. I used to use such reliable equipment, and always got great pics, or at least pictures of a blurry critter running by! At least SOMEthing. Now it is hit or miss with results.

So, I took the camera and cable down, came back down the hill and rigged the camera up on a branch of a tree in the backyard where we have a platform bird feeder. I *should* get some great bird pics and judging by all the camera flashes I’ve seen tonight- some interesting flying squirrel pictures! Hopefully they turn out!
Written by: Alyssa Johnson at 11/12/2012 07:53:00 PM Labels: camera trap, Cuddeback Attack, New York, Schoharie