Yes, there's an app for that!

There seems to literally be an app (or application for smart phones) for everything these days. In this case, I'm referring to an app that helps the user log road-killed animals into a data base. Yes, you read that right. An app about roadkill.

I first heard of this smart phone application over the summer. Someone sent me an article about a new app that was just coming out, in which anyone who wanted to participate, was invited to stop on the side of the road and document a road-killed animal. But I was in Alaska (did you know I lived in Alaska for 3 months???), and distracted and never really read it or thought much about it.

This semester I am enrolled in a course called Wildlife Techniques (FWLD 125) (3CR):

This course will cover a wide range of laboratory and field techniques related to the sampling of wildlife. Students will be provided first-hand experience with wildlife habitat improvement, developing Power Point presentations, global positional systems, digital photography, and capture, handling, and banding of birds. Field trips will be taken to examine deer winter ranges and other wildlife habitats. Each student will independently conduct and write up a field study.

Ok, so for my "field study", I've chosen to download the app and learn how to use it. This is a 100 level course, so the field study doesn't have to include any ground breaking research. Our instructor, just really wants 2nd semester freshman (which I'm not, but I transferred in and FLCC didn't have a class like this when I was there) to get excited about the field and how to access information via the college library.

I'm going to make this a beefier project and play the angle up of the "citizen scientist" getting involved. This app, if used correctly can show those of us who care, when and where animals are moving. Anyone with a smart phone can participate. You don't need to be a biologist, you just need be able to identify native wildlife. The use of modern technology as means of data collection is obviously becoming more and more popular for it's ease of use and convenience.

The other part of this app that appealed to me, is that the developer is an Assistant Professor at SUNY Plattsburgh. It's neat that someone within the college system (State University of New York) that I'm apart of came up with something so cool.

I'll be sure to update my findings and what I think of the app as I get into the project.

In the mean time, if you'd like to check it out for yourself, check out the developer, Dr. Danielle Garneau's website. Anyone with an iPhone, Android, or other smart phone can download the Epi-Collect app, then add her project (RoadkillGarneau) to start documenting roadkill! Instructions on finding and downloading the app can be found here.

AND Danielle told me to be sure to mention that "The other thing you might note is that if you don't have a smartphone, you can still participate...the google form (to answer questions, put GPS coordinates) is at the very bottom of my webpage above. This way you can encourage participation from a lot more people!"...so there ya go, you non-smartphone using wildlife lovers!

Oh and in unrelated news: yesterday several members of SUNY Cobleskill's student chapter of The Wildlife Society of which I'm apart of, went to a wildlife festival at nearby Huyck Preserve. There was a wildlife rehabilitator there with some of her animals. These animals were unable to be released back into the wild for various reasons. One of them, a southern flying squirrel, had been legally purchased at a pet store under the species name of "sugar glider". A sugar glider is a real animal, a marsupial from Australia. Not the same as our native southern flying squirrel. I'm not sure why they are legally allowed to be part of the pet trade in NY, since they are a native species. And, their cousin the northern flying squirrel, is illegal to possess. The squirrel was owned as a pet for 5 years, then was not wanted anymore. Obviously it could not be released into the wild, so this rehabilitator took it, and let us handle it. SO very cool, and for anyone who's read this blog before knows that I love flying squirrels!!! 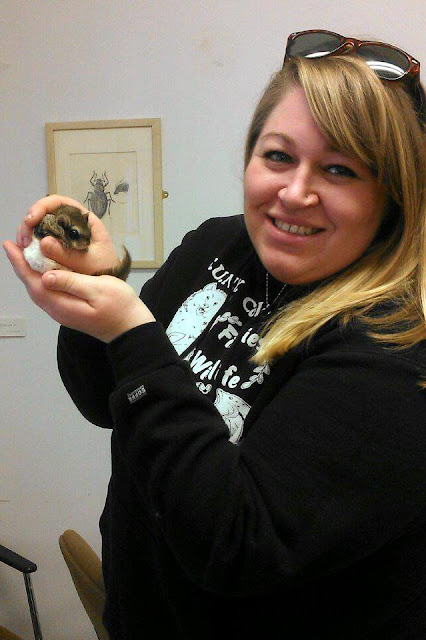