A few months ago, while I was in Alaska, I ran into a porcupine one night while I was out for a walk. The entry Little Miss Quill Piggy details that story. In the entry I wrote that I hoped one day to be able to write about how interesting porcupine feet are, and now I have my chance! 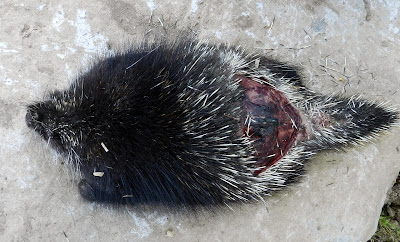 Earlier this week on our way to school, Mady (my roommate) and I found a road-killed porcupine within a half mile of our house. We both saw it at the same time, and I whipped a U-turn in the middle of the road to go back for it, while Mady was screaming "It's ok!!! We can be late for GIS class!". When we pulled up on it, we noticed how good of condition it was in, despite having been run over. A large patch of skin on it's hindquarters had been scraped away...but it was fresh (probably just a few hours old), and not particularly gushy. We had nothing to pick it up with, or put it in, so Mady kicked it into the drainage ditch next to the road, so no one else would stop and steal our porcupine :)

That afternoon we went back armed with leather work gloves, and a big cardboard box to bring it back to our house. Mady really wanted to collect it for its skull, and I wanted to check out its external anatomy. Before Mady beheaded it, I got some great up-close pictures of this porky's paws!

Mady and the porcupine.
It was a pretty good sized animal, and very dark! The porcupines I saw in Alaska were much more brown (see below). 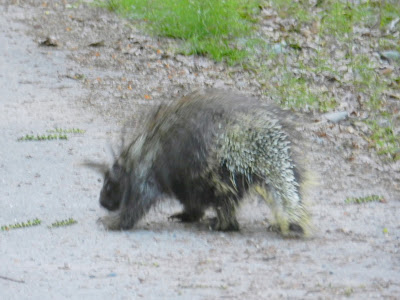 Anyway, here they are, those pebbly porky paws: 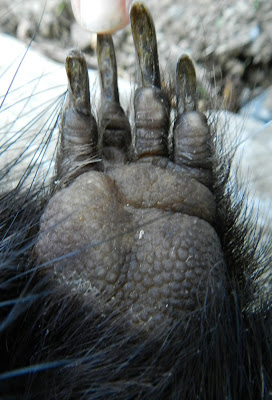 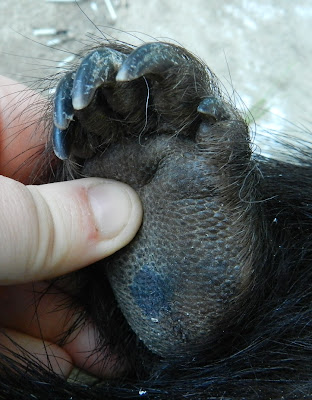 On the left: left front (4 toes)
On the right: left rear (5 toes)
Check out the texture of that pad! It's so different than any other mammal out there. If I saw just this: 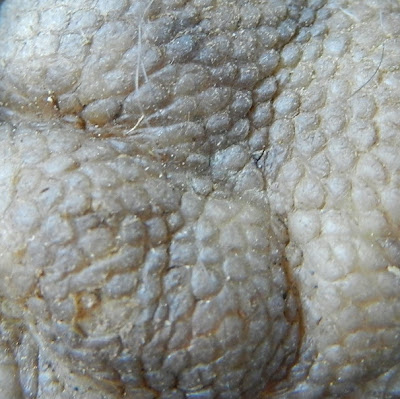 ...I'd think I was looking at reptile skin!
I haven't yet found porcupine tracks in the woods yet, but since we found this guy/gal, Mady found another roadkill porcupine within several miles of our house. The odds seem to be good for finding them where we live. I'm just waiting til one shows up on my camera trap! I have a good spot on our property that we're renting (7+ acres!), and have had quite a few wild visitors already. 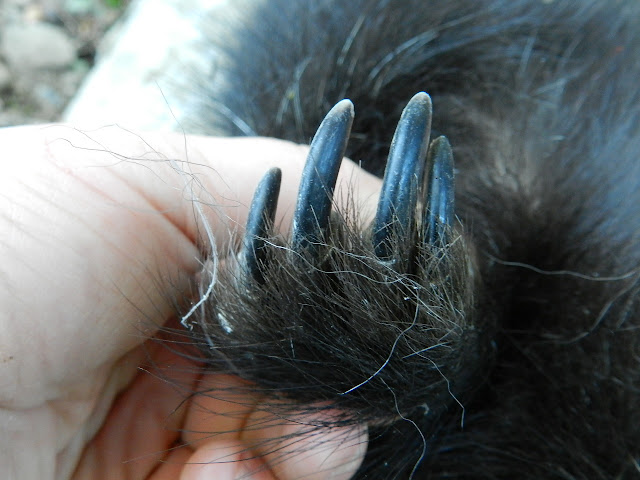 The other characteristic of the porcupine's paw that I wanted to share, are those long nails. The porcupine is an arboreal critter, meaning it spends much of its time climbing up and and down trees. These nails are like built in crampons! The picture below is of porcupine I observed in Alaska, just scaling the height of this tree in seconds. 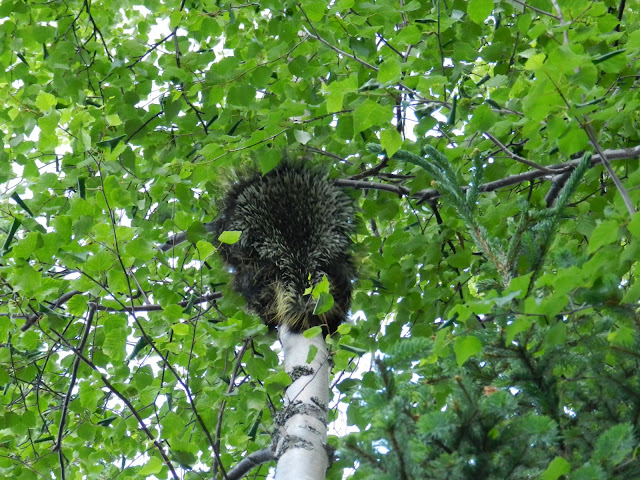 Those nails are like built in cramp-ons.
So, that's my second awesome porcupine experience. The first was of course better, because the critter was alive, but I was really able to feel the quills, and check out its feet this time. I'm not a hunter, and I don't really do blood and guts well, but I do love checking out dead animals...to anyone outside of this profession or field, I'm sure it seems like a morbid interest. It's how we learn though!
Written by: Alyssa Johnson at 9/15/2012 06:57:00 PM Labels: Cobleskill, Erithizon dorsatum, North American porcupine, Roadkill